Ultra-hot Jupiters — named as such because of their physical similarities to the planet Jupiter — are exoplanets that orbit stars other than the sun with temperatures so high that the molecules in their atmospheres are completely torn apart. They are among the most extreme environments in our galaxy.

They also whip around their parent stars in orbits that only last a few days, and astronomers still aren’t sure how it’s possible for them to form.

The seven most extreme planets ever discovered

While these harsh conditions might sound like they’re as extreme as it gets, astronomers are starting to realize they may just be the tip of the (very hot) iceberg. In a recent study published in The Astrophysical Journal Letters, my colleagues and I discovered that one of these exotic worlds in particular is even more extreme than we’d ever thought.

Discovered in 2016, WASP-76b is perhaps the most well-known of these ultra-hot worlds. At double the size of our own planet Jupiter, WASP-76b has day-side temperatures reaching a whopping 2,400 C, and takes less than two days to orbit its parent star. Its claim to fame, however, is a 2020 study suggesting that liquid iron might literally be raining down from its skies.

From iron rain on exoplanets to lightning on Jupiter: four examples of alien weather

More recent research, yet to be peer-reviewed, has called this result into question. But there’s no doubt that the conditions on WASP-76b are totally unlike anything here on Earth. WASP-76b can therefore offer us a window into the most extreme physical and chemical processes in our galaxy, and studying its harsh alien conditions can help us place our own solar system into context.

Unfortunately, studying exoplanets — even massive ones like WASP-76b — is often easier said than done. The 4,500 exoplanets already discovered are incredibly far away from us, and their parent stars are so bright that light from the exoplanets themselves gets completely washed out.

Rather than looking at the exoplanets directly, we often have to find ways to infer their presence instead. These indirect methods have actually been responsible for most of the exoplanets we’ve discovered. As a bonus, we can use these methods to peer into the exoplanets’ atmospheres as well.

Explainer: How to find an exoplanet (part 1)

This is the idea behind transit spectroscopy. When an exoplanet passes in front of, or transits, its parent star, the light from the star gets filtered through the exoplanet’s atmosphere. Different atmospheric gases leave unique chemical imprints — like fingerprints — on the starlight, and by studying these fingerprints, we’re able to learn which gases are present. This can help us learn more about what conditions on the exoplanet are actually like.

In theory, you can do this for any exoplanet with an atmosphere, but it’s easiest with atmospheres that are hot and puffed-up. Large, extended atmospheres leave stronger chemical imprints on their starlight, which makes them much easier for us to observe.

This is precisely why our team chose WASP-76b as one of the first exoplanets to be observed by our new ExoGemS (Exoplanets with Gemini Spectroscopy) survey. Led by Jake Turner, Ray Jayawardhana and Andrew Ridden-Harper at Cornell University, the goal of the survey is to glimpse into the atmospheres of more than 40 exoplanets using the Gemini North telescope in Hawaii.

In this particular study, we observed WASP-76b for a period of four hours as it transited in front of its parent star. We were searching for the chemical fingerprints of metals in its atmosphere, because at these extreme temperatures, metals will actually vaporize into gas.

WASP-76b had already been observed many times in the past, but our observations from the Gemini North telescope reached redder wavelengths of light than previously published results. This meant that we could search for chemical fingerprints that previous studies didn’t have access to, shedding a much broader light on the exotic composition of this extreme world.

What immediately stood out to us in our data was a series of three very strong absorption features at infrared wavelengths of light. We recognized these as the chemical fingerprint of ionized calcium — calcium atoms that have lost an electron — and the signal was so strong that we could actually see it moving around as the exoplanet orbited its parent star.

A video by the European Southern Observatory showing the ultra-hot giant exoplanet WASP-76b.

Finding calcium in WASP-76b’s atmosphere wasn’t particularly surprising — a different set of calcium signals had already been detected earlier this year. What did surprise us was just how much ionized calcium we were seeing — much more than any of our theoretical models predicted we would.

So what’s going on? One possibility is that WASP-76b’s atmosphere is even hotter than the 2,400 C we’d previously thought. These extreme temperatures would strip electrons off of regular calcium atoms, and the hotter the temperature, the more frequently this is going to occur.

Another possibility is that powerful winds are unearthing ionized calcium atoms from the exoplanet’s depths. A recent study actually suggested that WASP-76b may have winds as fast as 22 kilometres per second. For reference, the fastest winds ever measured on the Earth had a speed of less than one kilometre per second.

In a fortunate coincidence, another team of astronomers used observations from the Calar Alto Observatory in Spain to detect this same ionized calcium signal in infrared light. Like us, their data showed more ionized calcium than expected. There’s clearly much more going on in WASP-76b’s atmosphere than we’d thought.

WASP-76b has been observed by just about every major telescope out there, from the Gemini North telescope in Hawaii to the Very Large Telescope in Chile all the way up to the Hubble Space Telescope in outer space. To fully piece together the puzzle of what’s going on its atmosphere, we’ll need to wait for observations from the powerful new James Webb Space Telescope set to launch in December 2021.

In the meantime, our ExoGemS survey will allow us to continue investigating the atmospheres of dozens of exoplanets — many of which have never been characterized — from right here on Earth. There’s no doubt that WASP-76b’s weird, wild atmosphere is just the beginning of what we’re going to uncover.

50 images of the universe from the Hubble Space Telescope

50 images of the universe from the Hubble Space Telescope

The Horsehead Nebula in Infrared (2013)

A Supernova in the Galactic Outskirts (1999)

The Tarantula Nebula in Infrared (2014)

When the Same Supernova Happens More Than Once (2015)

Yeeting a Star From the Galaxy

Power outages are likely during winter weather, especially when large amounts of snow or ice are involved. Here's how to be prepared.

After slamming parts of the South and East, a winter storm moved Northeast Monday, while north-central states braced for brutal cold midweek. See the latest.

Ask the Weather Guys: How do ice crystals form and grow?

Ice crystals are made of water molecules, which are formed by two hydrogen atoms and one oxygen atom.

It will be a cold day in Bismarck, with temperatures in the 30s. It should reach a cold 35 degrees. Expect a drastic drop in temperatures thou…

Temperatures will be just above freezing in Bismarck today. It looks to reach a nippy 37 degrees. Expect a drastic drop in temperatures though…

Cool temperatures will blanket the Bismarck area Sunday. It should reach a bitter 41 degrees. Expect a drastic drop in temperatures though, wi…

It might be a good day to stay inside, with temperatures barely hitting 15 though it will feel even colder at 13. 9 degrees is today's low. It…

It might be a good day to stay inside, with temperatures barely hitting 2 though it will feel even colder at 1. We'll see a low temperature of…

Bismarck people should be prepared for temperatures just above freezing. It looks to reach a nippy 36 degrees. Expect a drastic drop in temper…

Bismarck's evening forecast: Partly cloudy during the evening. A few snow showers developing later during the night. Low 9F. Winds S at 10 to … 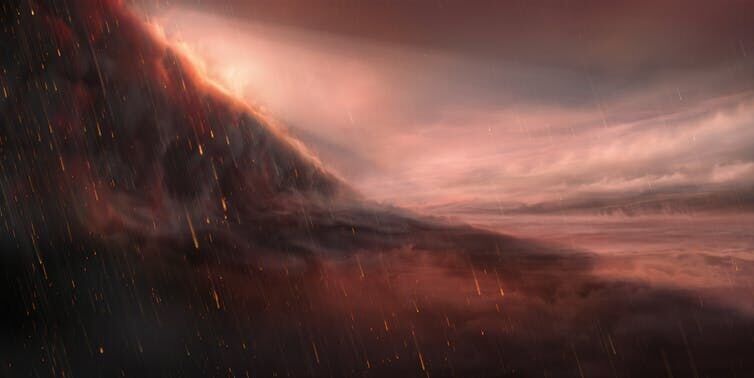 An artist’s impression of the exoplanet WASP-76b, which is hot enough to vaporize metals. 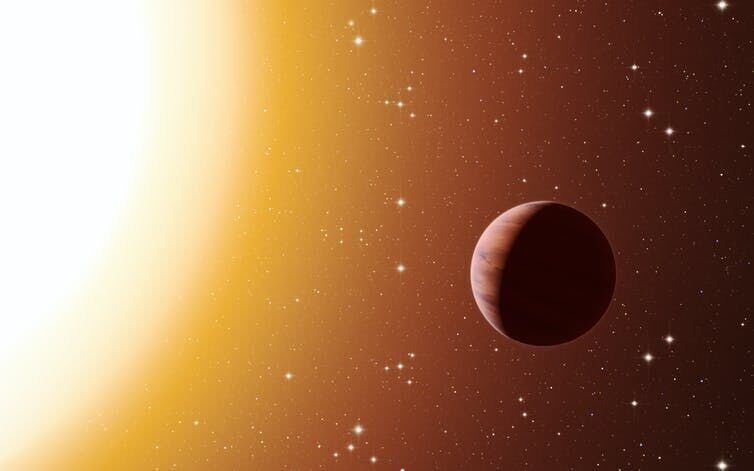 An artist’s impression of a hot Jupiter planet, similar to WASP-76b, orbiting close to one of the stars in the rich old star cluster Messier 67. 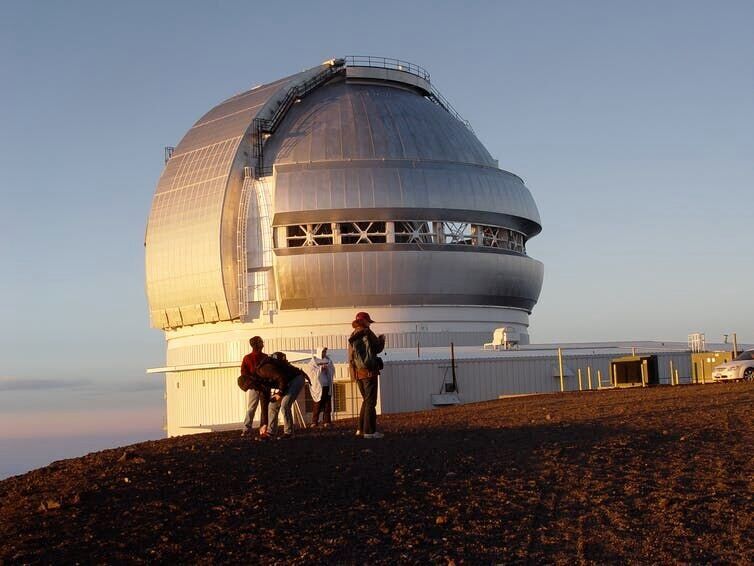 The ExoGemS survey uses the Gemini North telescope in Hawaii to study the atmospheres of more than 40 planets.