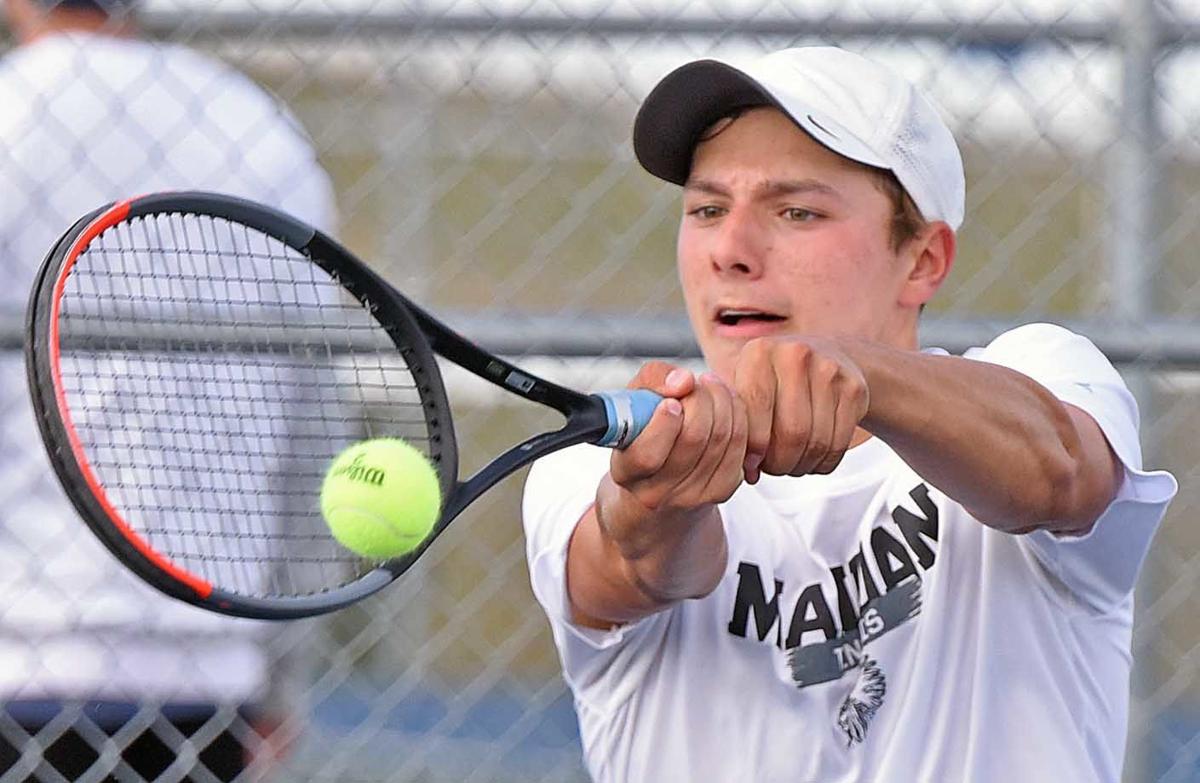 Mandan's Brady Helbling eyes the ball during his match against Jay Moylan on Tuesday. 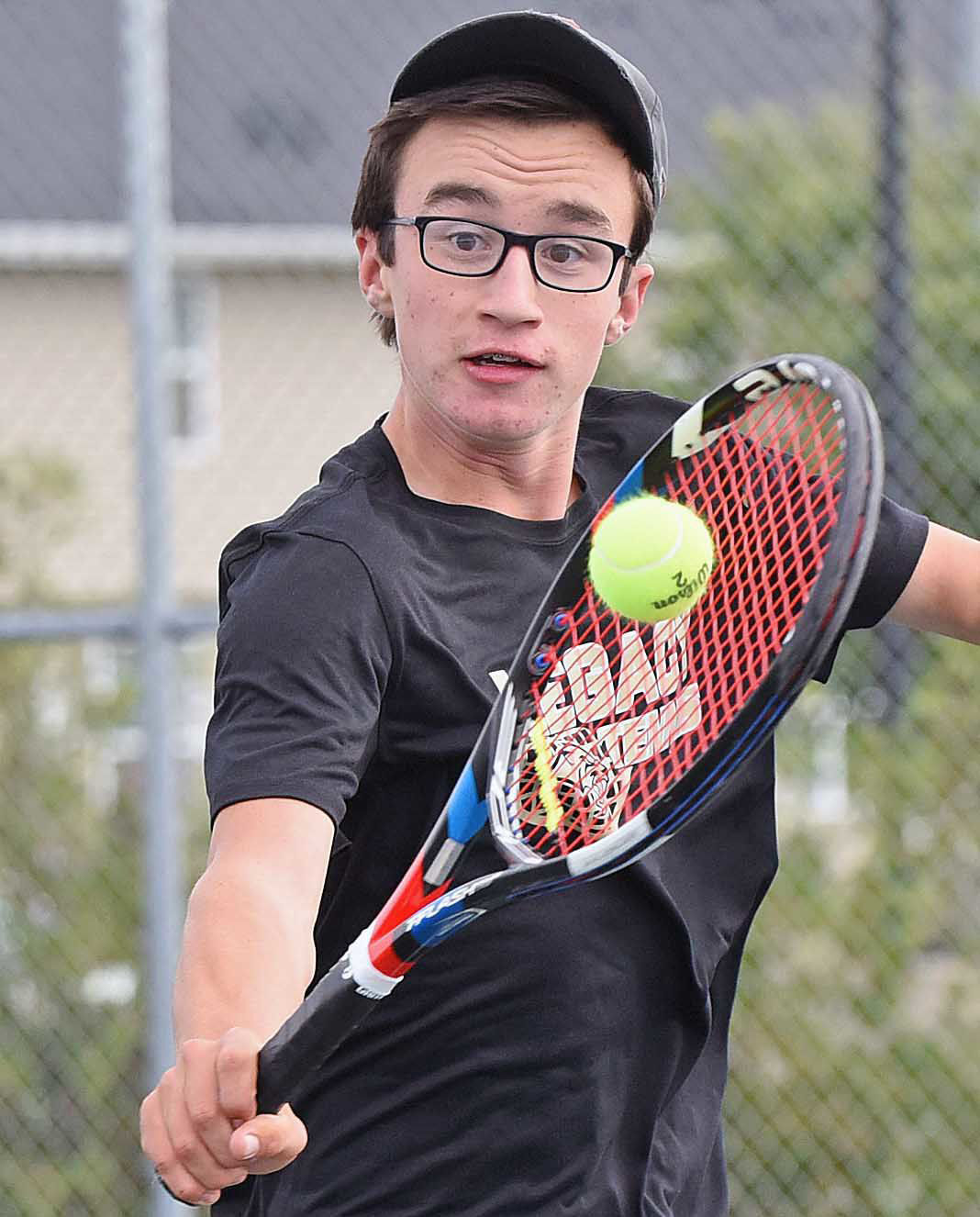 Legacy's Jay Moylan hits a backhand return during his No. 1 singles match on Tuesday against Mandan's Brady Helbling.

On paper, it was all Legacy in the cold and wind on Tuesday in Mandan.

But, the final score was deceiving.

The Braves took the West Region's top team to a pair of three-set singles matches, however the unbeaten Sabers survived both in an 8-1 victory.

"I think we're improving and a big part of that is having to play good, competitive matches against teams like Mandan," Legacy head coach Scott McPherson said. "The score was not indicative of how close the match was. I thought Mandan played really well."

Paul Christen, Mandan's head coach, thought his team played better this time against the Sabers despite winning one less match.

"I thought we played some really good tennis today," Christen said. "Legacy has a very solid team, so you have to play well to be in the match and I thought our guys did a lot of nice things today."

The Braves are one of several teams challenging for the No. 2 spot in the West. A key match looms on Friday at Minot against the Magi.

"I think our guys are starting to believe that we have a team that can not only qualify for state, but push some of the top teams at state," Christen said.

McPherson always has an eye on the postseason. Tuesday he shuffled his doubles teams to get a fresh look at new pairings. The results remained the same. The Sabers won all three.

"We haven't mixed our doubles teams yet. I felt like they were all pretty compatible," McPherson said.

Corby Svihovec and Nick Mathern dropped just three games at No. 1 doubles against Brady Helbling and Keaton Pritchett, both of whom turned in strong performances in singles for the Braves.

Anthony Janes and Jack Johnson surrendered just five games at No. 2, while Jay Moylan and Gage Martell earned a 6-3, 6-4 win over Braden Ressler and Trevor Elijah at No. 3.

Elijah scored Mandan's lone win in the dual at No. 6 singles, earning a 7-5, 6-2 win over Gage Martell. Elijah, a senior, has just one loss on the season.

"Trevor has done really well for us," Christen said. "He's been really steady."

At No. 1 singles, Svihovec dropped just one game. There's no shame in losing to the region's top player. Mandan's No. 1 singles player is eighth-grader Karter Hatzenbuhler.

"Corby does that to a lot of players," Christen said. "Karter has been improving all year and he's still got a lot of room to improve. He's doing what we ask him to do. He's got a bright future."

In fact, Helbling, a sophomore, was the first player to take a set from Moylan this season. The Legacy junior churned out a 6-3, 4-6, 6-2 win.

"Brady's always had the strokes, it's just finding that consistency," Christen said. "Jay's a really solid player. Brady played well. We were really happy with how he played today."

At No. 3, Pritchett took Janes to a first-set tiebreak, but lost 7-6. There was no head-hanging, though. Pritchett, a senior, leveled the match with a 7-5 triumph in set 2. Janes, however, controlled the third, 6-1.

"That's the best match Keaton's played this year," Christen said. "Janes is a state qualifier, a really good player. That was a really good match."

"It's really remarkable how much Jack has improved," McPherson said of Johnson, who was a regular in the lineup for the Bismarck Governors baseball team over the summer. "He's very competitive. He has all the ingredients to be a good player. Those things have helped him become a better tennis player in a short period of time."

The Sabers' next match is Thursday against Century.

"We're just two-and-a-half-weeks from the postseason," McPherson said. "We still have some big matches coming up, but we do feel good about where we're at right now."

Mandan's Brady Helbling eyes the ball during his match against Jay Moylan on Tuesday.

Legacy's Jay Moylan hits a backhand return during his No. 1 singles match on Tuesday against Mandan's Brady Helbling.