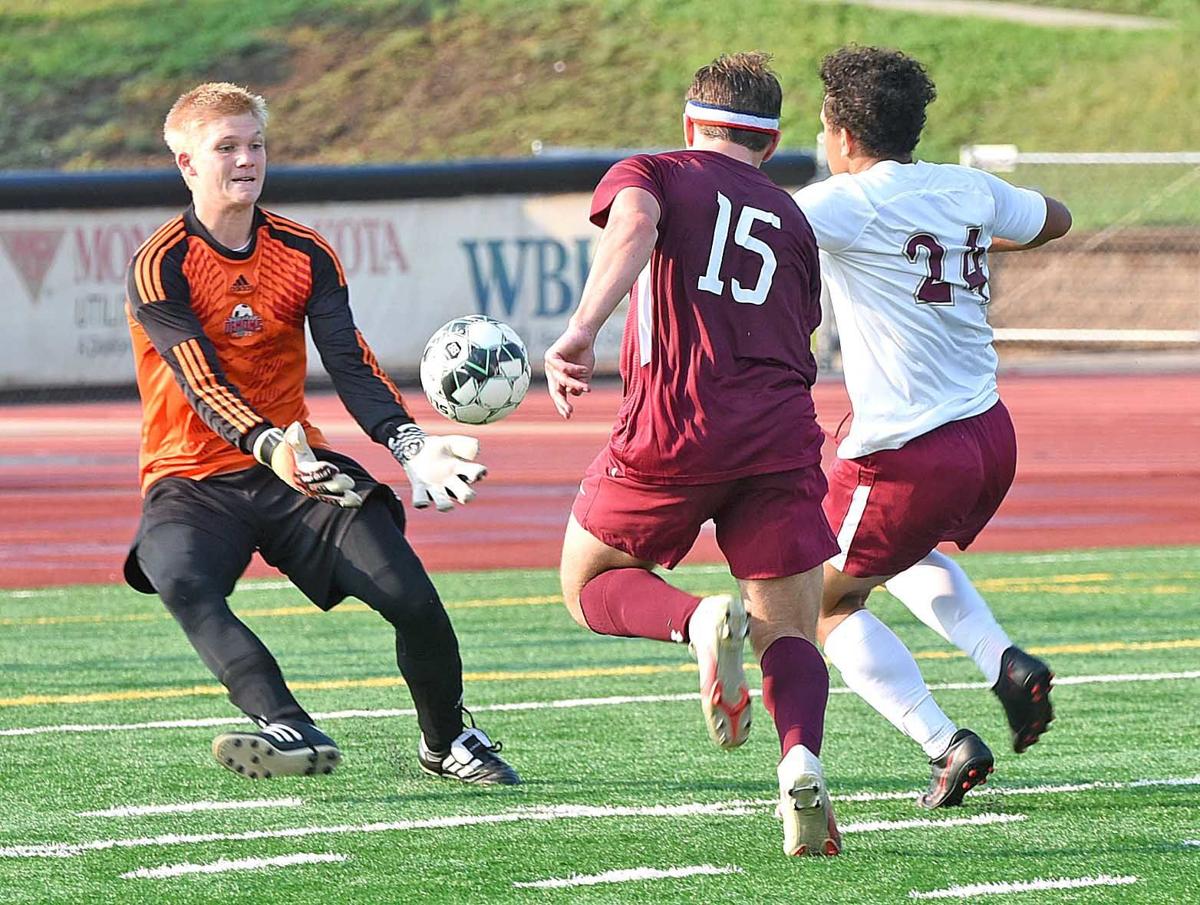 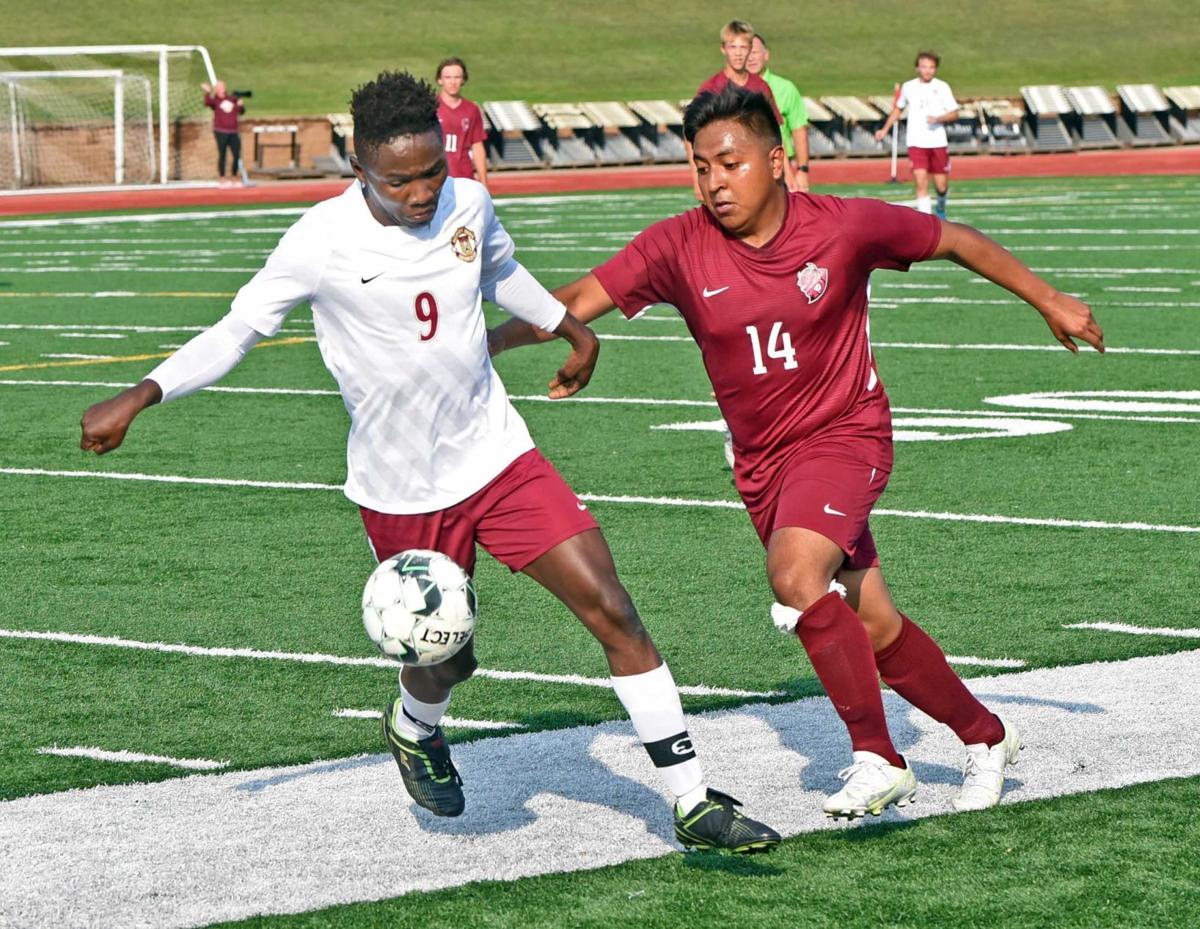 Minot's Manasseh Boakye (9) gets to the ball in front of Bismarck's Edgar Reyes (14). 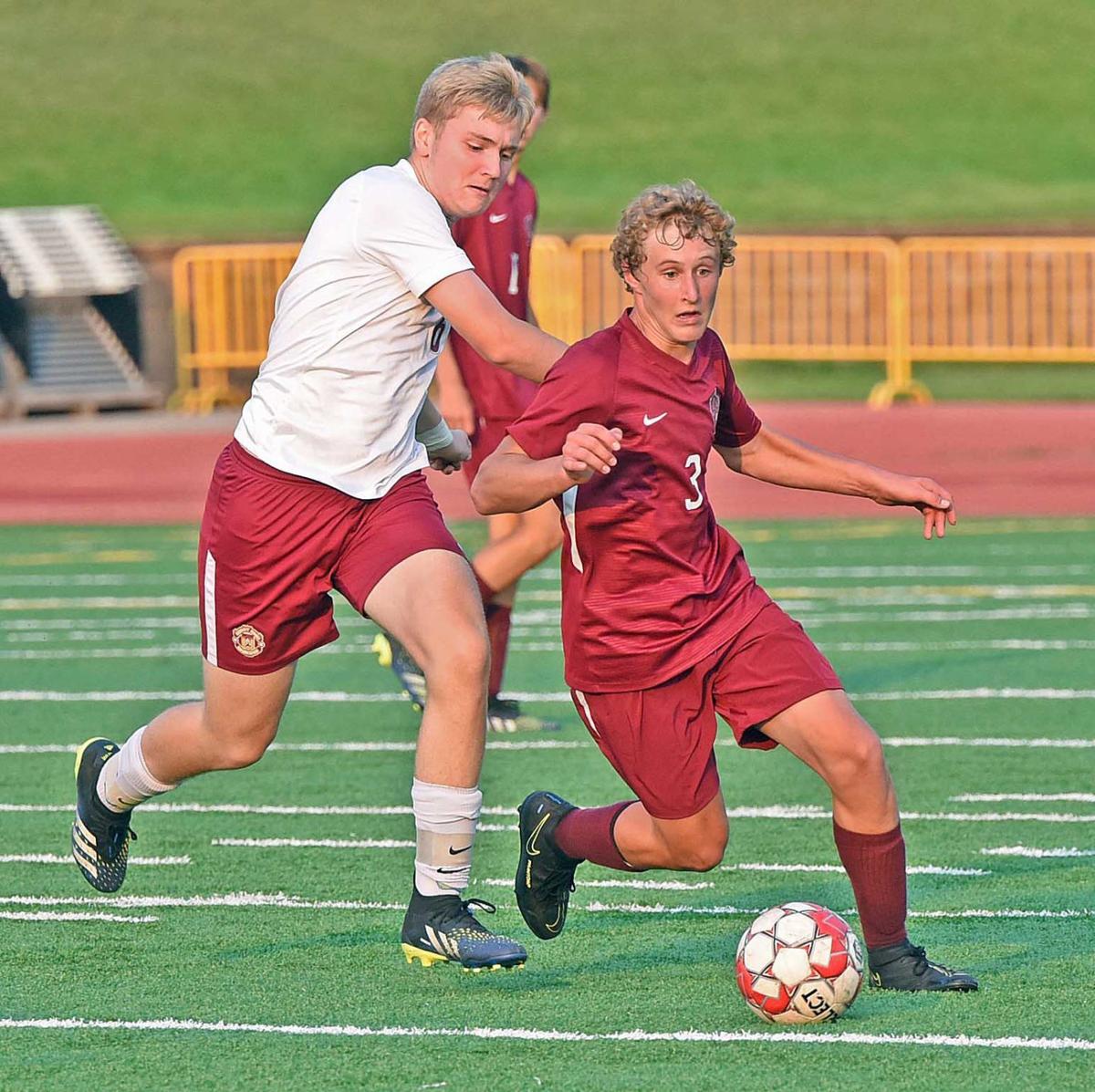 Bismarck's Bryce Vatnsdal (3) gets to the ball ahead of Minot's Aiden Stewart during Thursday night's game at the Bowl.

Many coaches have said it in many sports.

"Be patient. Let the game come to you."

Anderson was patient after he hit the crossbar on a breakaway in the middle of the second half of a scoreless soccer game. And he was patient, again, five minutes later on a nicely played through ball. That opportunity was snatched away by onrushing Bismarck goalkeeper Drew Henriksen just as Anderson was about to make a play on it.

Then, finally, the game came to him.

Set up by the sharp passing of brothers Ezra and Ian Hagerott, Anderson slipped a shot to the left side of the net to break a scoreless deadlock at 67:06.

Ezra Hagerott added another goal on a 45-yard bomb that dropped just under the crossbar with two seconds to play for a 2-0 Magician victory.

That win at the Bowl enabled the Magicians to keep their record spotless at 8-0-0. They improved their West Region log to 6-0-0 for 18 points.

Anderson, who has three goals on the season, said he didn't do anything fancy after receiving Ian Hagerott's pass about 15 yards from the goal mouth.

"I just wanted to make contact with the ball, because the goalie was coming," he said.

After his two near-misses earlier in the half, Anderson said he was beginning to wonder if it was just not his day.

"I didn't know if I was ever going to get one today," he said.

He said his teammates put him in good position to score.

"Ezra was coming down through the midfield and passed to his brother, Ian," he recalled. "I saw a gap between two defenders and broke through, and Ian made a perfect pass."

Anderson, a 6-foot-1, 180-pound junior, said a scoreless tie was not something the Magicians were willing to accept.

"It definitely looked like (a tie) for a while, in the first half, especially," he said, "... but we knew we were a lot better than we played in the first half. In the first half we just weren't ready for it. Our passing could have been better and we weren't communicating well."

The Magicians were patient in tempo and precise in passing, determined not to beat themselves.

That was borne out by a 9-3 edge in shots on net and an overwhelming territorial advantage, particularly in the second half.

Bismarck's last genuine scoring opportunity, with fifteen and one-half minutes to play, was a bad-angle shot from the left wing by Babu Ramadhani that went wide right.

Anderson said Minot's unbeaten status is not much of a surprise to anyone in the Magician locker room.

"I think we all knew we were going to be pretty good coming into this season," he observed.

With Thursday's victory, Minot improved its goal margin to 18-7 with two shutouts.

Both teams return to action with road matches on Tuesday. Minot visits Dickinson and Bismarck plays at Jamestown.

First half: No scoring.

Did Mike McCarthy buy himself some time?

Did Mike McCarthy buy himself some time?

Minot's Manasseh Boakye (9) gets to the ball in front of Bismarck's Edgar Reyes (14).

Bismarck's Bryce Vatnsdal (3) gets to the ball ahead of Minot's Aiden Stewart during Thursday night's game at the Bowl.