Mugisha leads Demons over Mandan
Share this
{{featured_button_text}}
1 of 2 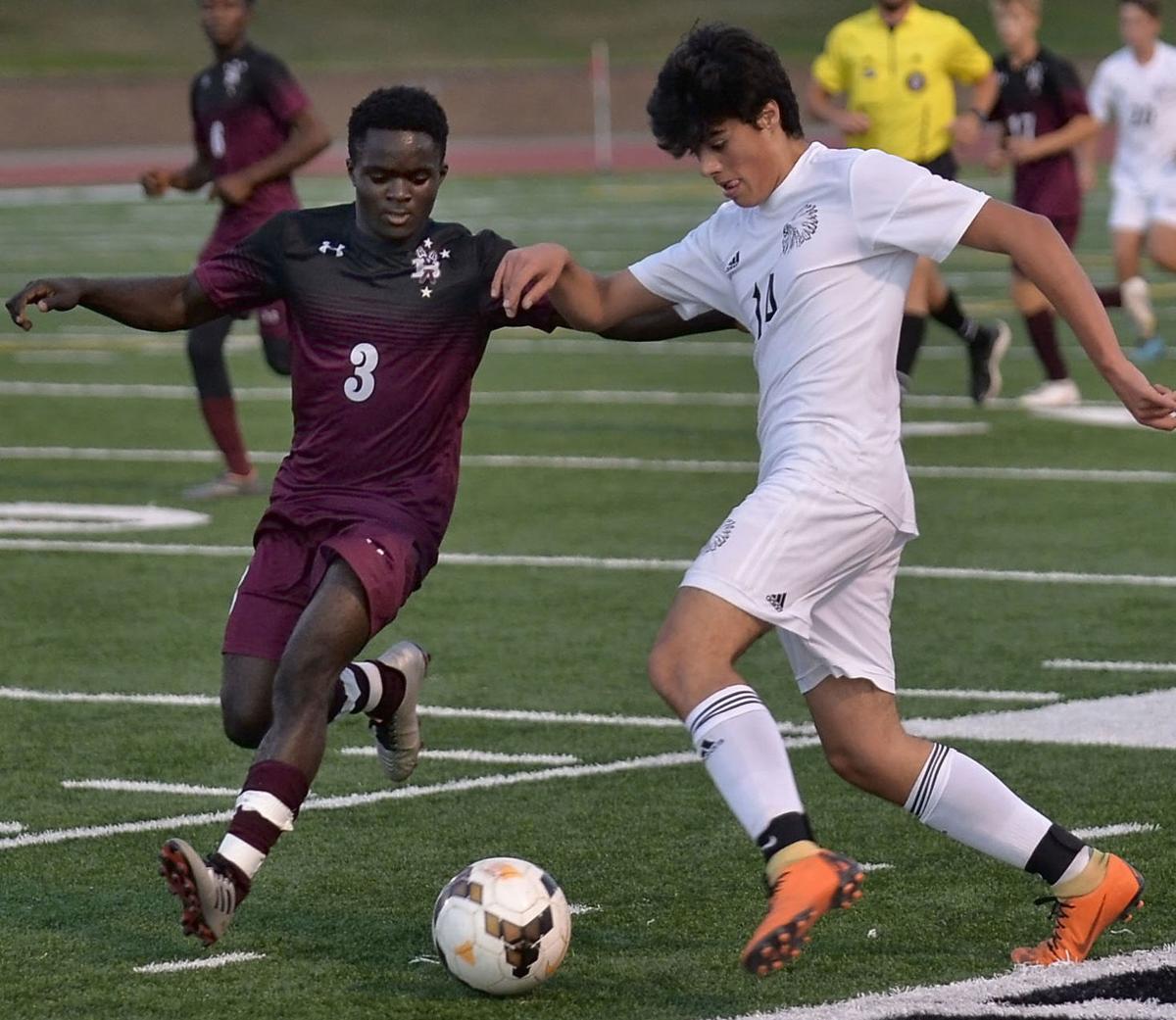 Bismarck's Christian Tanefeu and Mandan's Santi Barreto stretch for the ball during Tuesday night's match at the Bowl. 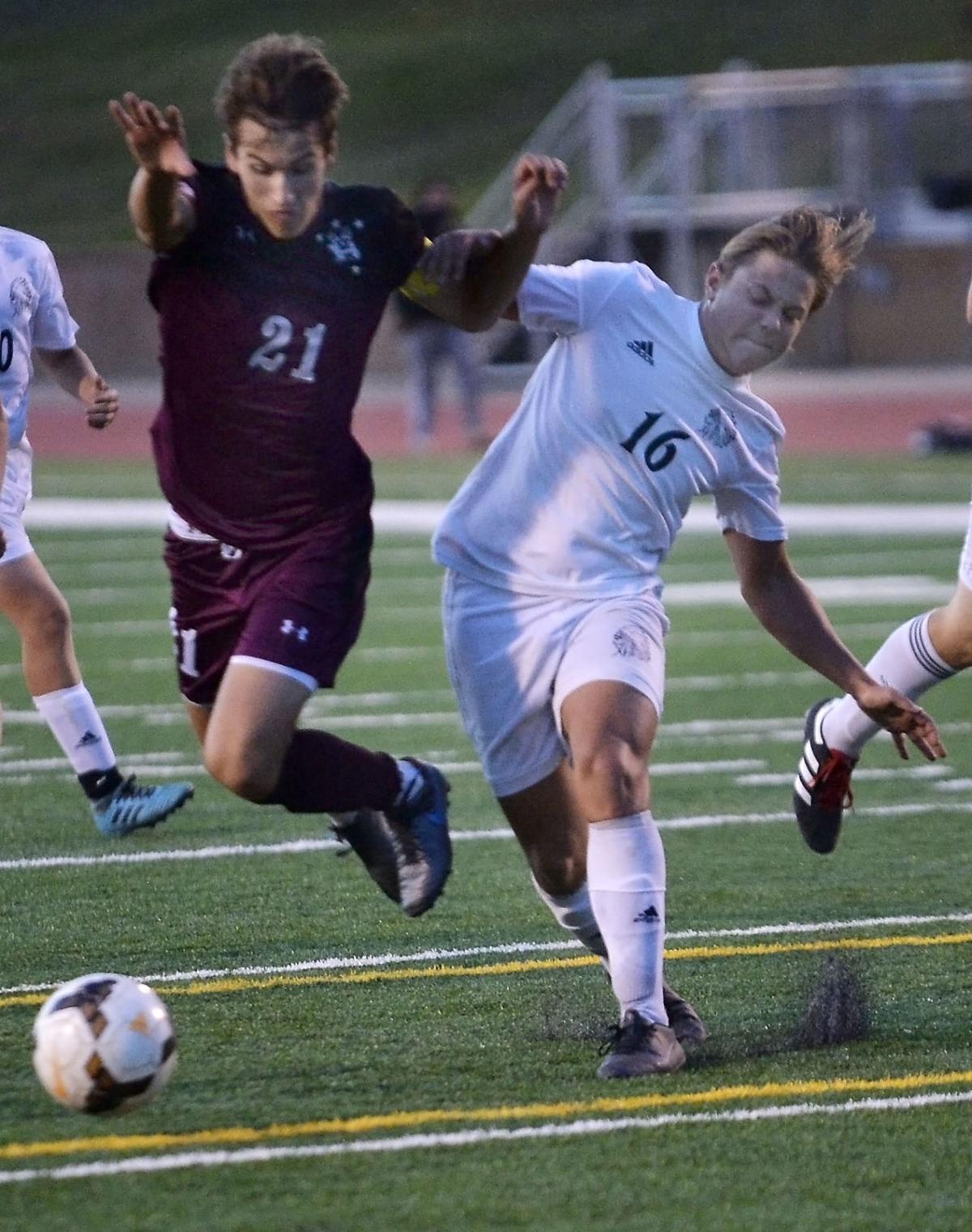 Bismarck's Edwin Rasidovi, left, leaps while angling for the ball as Mandan's Dalton Fleck pursues during Tuesday night's match at the Bowl.

Rodrigue Mushiga’s goal early in the first half against Mandan on Tuesday was all the Bismarck Demons needed, but they didn’t stop there.

The West Region-leading Demons scored almost at will in a 9-0 win over the Braves at MDU Resources Community Bowl. With the win, the Demons improved to 10-1-1. Every win this season has been by shutout.

“I’m just happy that I scored,” said Mugisha, who scored three goals to take over the region lead with 17. “We were just working hard on finishing because we’ve been missing a lot of chances.”

The Demons came into the match with six straight shutouts since a 1-1 tie with Legacy on Sept. 1. Their only loss was a 4-3 setback to Century in August.

Mugisha scored two early goals to give Demons’ keeper Drew Henriksen all the support he needed. The sophomore netminder notched his ninth shutout of the season. He has not allowed a goal yet and had just two saves on Tuesday, one in the opening minutes and one in the last minute of the game.

Mugisha opened the scoring at 14:27. He took a long feed straight down the middle of the field and gave Mandan keeper Will Mickelson no chance.

Mugisha struck again at 18:19, again coming straight down the field. This time, he waited until Mickelson came out at just flicked the ball over the keeper.

Isaac Barth made it 3-0 at 21:05 when he took a perfect corner kick by Mason Weigel and headed it in.

“We came out with stronger intensity in the beginning,” Bismarck coach Ricardo Pierre-Louis said. “It’s important to score the first couple of goals early so the opponent starts losing interest and getting frustrated.”

It could have been 5-0 at the time but the Demons had already put a shot off the upright and a free kick off the crossbar. BHS continued the offensive pressure all game long.

Nathan Sagsveen finished the first half with two goals in just 1:04. The second goal came after a Mandan player played a goal kick right to Sagsveen, who raced in unmolested to make it 5-0 at 36:28.

“What we also saw tonight was the finishing qualities,” Pierre-Louis said. “We did a better job putting our chances away. We are improving. We’re seeing better intensity out of the lads and better finishing.”

The Demons have outscored their opponents 66-5 this season. Both totals are best in the region. While impressive, that doesn’t mean a whole lot to Mugisha.

“The main point is to win state again and bring it back home,” Mugisha said.

Bismarck's Christian Tanefeu and Mandan's Santi Barreto stretch for the ball during Tuesday night's match at the Bowl.

Bismarck's Edwin Rasidovi, left, leaps while angling for the ball as Mandan's Dalton Fleck pursues during Tuesday night's match at the Bowl.