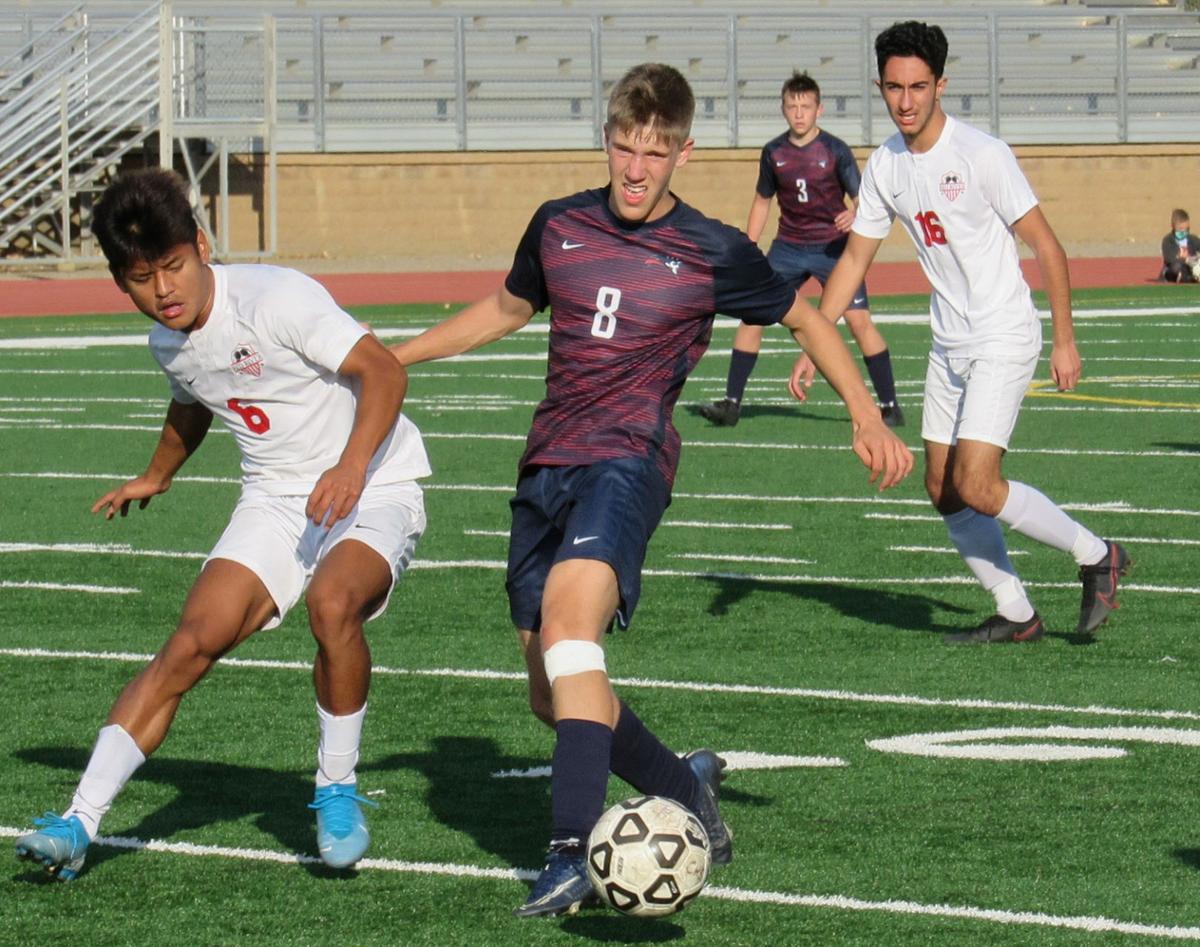 Century's Chance Bowlinger dribbles during Tuesday's game against Red River. In the background is Brennan Fode (3).

It got a little stranger on Thursday.

The Patriots found out they will be playing West Fargo Sheyenne’s junior varsity team in the state semifinals at Fargo South High School on Friday. Sheyenne’s varsity was forced to quarantine due to COVID-19 protocols.

It’s a situation Century coach Ryan Okerson knows very well. The Patriots played the last four game of the regular season with a large chuck of its varsity team sidelined due to virus exposure.

“Nobody wanted to see the state tournament affected in this way, but the fact is, it is,” Okerson said. “It’s unfortunate for Sheyenne. You get to a semifinal and don’t get to play. That’s difficult.”

While some may view it as a break for Century, it also puts Sheyenne in a no-lose situation. The Mustangs were unbeaten during the regular season in 15 matches -- 11 wins and four draws.

“I think the pressure comes back on us. We’re going into the game as heavy favorites,” Okerson said. “When JV guys come out, they work as hard as they can. They want to show they can play. That’s what our kids did when we were in this situation. So by no means can we just show up and expect a result. I think our kids understand that. We need to play well or we could drop the game and that’d be the end of it.”

The Patriots (12-2-2) are coming off a marathon quarterfinal win over the Grand Forks Red River where 100 minutes were not enough. Neither was five, six, seven, eight or even nine rounds of penalty kicks. It took until Brennan Fode delivered the walk-off winner in the 10th round of PKs to send the Patriots to the final four.

“(Wednesday) was more of a recovery day. We had a bit of fun at training,” Okerson said. “(Thursday) we need to dial it back up.”

Century’s varsity squad has been a little disjointed in its two games since returning.

“We need to play better. We haven’t been able to be fully connected since we got everyone back together,” Okerson said. “We’re working to make that come back.”

The Patriots have plenty of firepower to make a run at their first state title since 2013. Nikko Helderop leads the way with 13 goals. Ken Brako has 11, Anthony Cleary 8, Chance Bowlinger 7 and speedy sophomore Kaiden Campbell 6. Century is strong in net with senior Ben Cleary.

For Century, it’s already been a season to remember in many ways.

“We’ve had both good and bad, but that’s been the case for so many teams, not just in our sport but every sport has had issues,” Okerson said. “Kids all across the state have had to deal with these unique challenges. What I’ve seen is a lot of kids stepping up and doing their best both in terms of their performance on the field and doing the right things off the field to have the opportunity to compete.”

Bismarck and Century will play for the state soccer championship Saturday in Fargo.

Century's Chance Bowlinger dribbles during Tuesday's game against Red River. In the background is Brennan Fode (3).