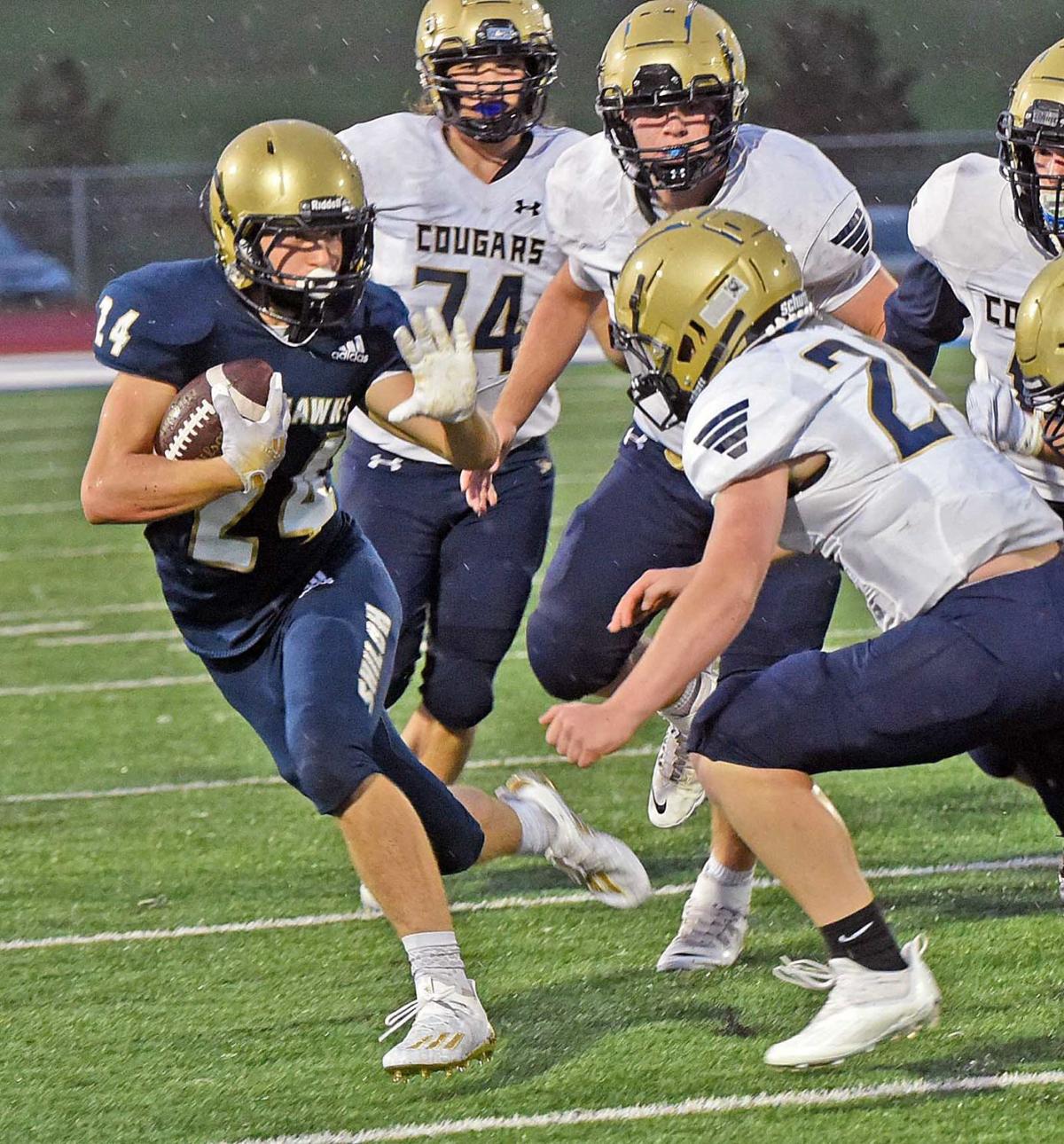 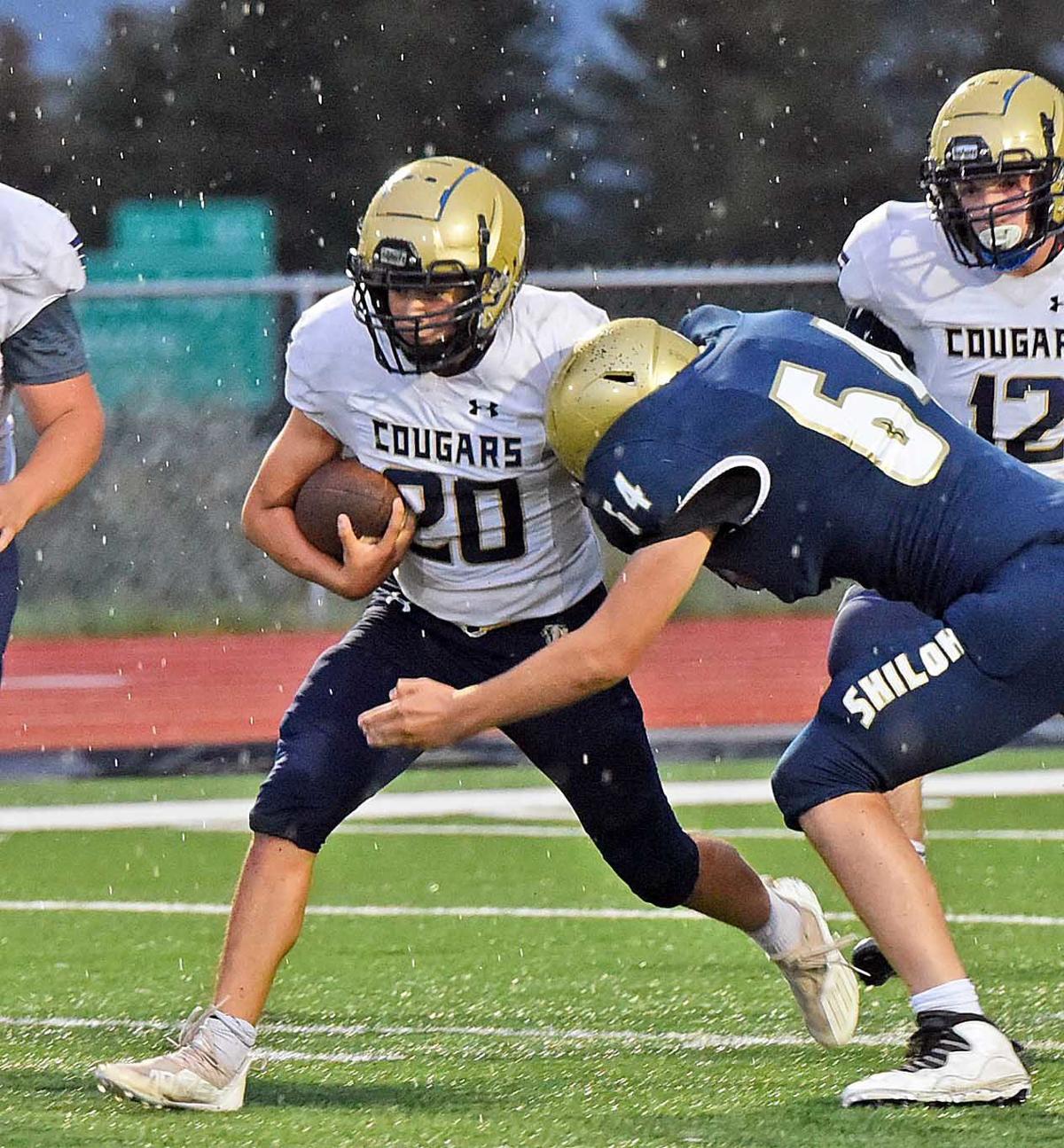 But by the time the first quarter was over, the Skyhawks had run up 29 points and built a commanding lead.

It all started with a punt.

After Shiloh netted seven yards on a game-opening three-and-out, Michael Fagerland boomed a punt deep, pinning Heart River in the shadow of its own goal line.

That was the spark Shiloh needed as they scored a safety and four touchdowns in the opening 12 minutes en route to a 47-12 victory over the Cougars in their Southwest Region opener on Friday night at Miller Field.

“We had a little hiccup there on our first drive, but I thought our defense responded well and our offense fed off our defense all night,” Skyhawks coach Funnon Barker said. “We had some big plays and really broke that thing open in the first quarter.”

Fagerland ran for 138 yards and three touchdowns in the first half, but he made his biggest mark on the game with his kick.

He wasn’t expecting to add kicking duties to his repertoire.

“Yesterday, our kicker and punter got a concussion in practice so me and Eli Thompson were working on punting and kicking after practice,” Fagerland said. “I came out that first punt and just absolutely smoked it – I surprised myself. That was crazy.”

Three plays after Fagerland pinned the Cougars at the 1, Trent Radenz sacked Heart River quarterback Jayden Bailey for a safety and a 2-0 lead.

After a big kickoff return on the free kick, Shiloh covered 31 yards in three plays with Carter Seifert connecting with Isaac Emmel on a 14-yard touchdown pass for an 8-0 lead just 44 seconds after the safety.

“There’s no doubt, field position in high school football is something that is sometimes overrated but any time you can make a team go a long distance, in this case 99 yards, you’re likely to force them into bad situations and that’s what happened,” Barker said.

“With the special teams, we got it on our side of the field,” Fagerland said. “Our offense didn’t really need to do much of a job, it was just hand the ball off, the line did a good job, opened some holes and we took it to the house.”

The Skyhawks started four ensuing plays in Heart River territory, and cashed in on the short field.

“That was huge,” Fagerland said. “That really got the whole team rolling. It just started the momentum right away and we just kept it the whole way through.”

Seifert had his hand in the first three TDs, throwing the strike to Emmel and carrying it in from 26 yards and 8 yards on the next two possessions.

In his third game at quarterback, Seifert completed 4 of 5 passes for 58 yards, a touchdown and an interception and rushed five times for 58 yards and two TDs.

“We looked at a couple of plays, thought they would give us a little opening for him and he took advantage,” Barker said.

Eli Thompson intercepted a Bailey pass and returned it to the Cougars’ 12, with Fagerland scoring on the next play for a 29-0 lead with 40 seconds left in the first quarter.

With all the points on the board, the Shiloh defense played a huge role in the victory, the Skyhawks’ second straight after a season-opening non-region loss to Harvey-Wells County.

“Our defense played the best we’ve played all year,” Barker said. “Our linebackers played downhill a little more and our back side really flowed well so we didn’t give up many cutback yards, which is something we’ve struggled with the first couple weeks. It’s good to see some of the things we’ve been working on come to fruition in a game.”

The Skyhawks’ defense scored a safety and added a second-half TD when Joey Desir stripped a Cougars ballcarrier of the pigskin and sprinted 30 yards for a score.

Shiloh forced three turnovers and limited Heart River to 146 yards total offense – with Austin Buckman accounting for 120 yards rushing and both Cougar touchdowns, one coming late in the first half and the other on the opening play of the fourth quarter.

The Skyhawks compiled 331 yards total offense, including 226 on the ground and 105 through the air.

After dropping the season opener, the Skyhawks have reeled off wins over Ellendale-Edgeley-Kulm and Heart River.

“The first game, we didn’t have much chemistry, we were making stupid penalties and all that. So it’s really good to see us coming all together,” Fagerland said.

It would have been hard to script a better opening half for the St. Mary’s Saints.

Grant County-Flasher's football team has been playing to its nickname down the stretch.

Shiloh's strong season has come against a serious schedule

Shiloh Christian has won a lot of football games with Funnon Barker in charge, 99 in 12 seasons, to be exact.

Hettinger-Scranton's nine-man football team has proved good things come to those who hang in there.

Century erupts in second half, runs past Fargo Shanley