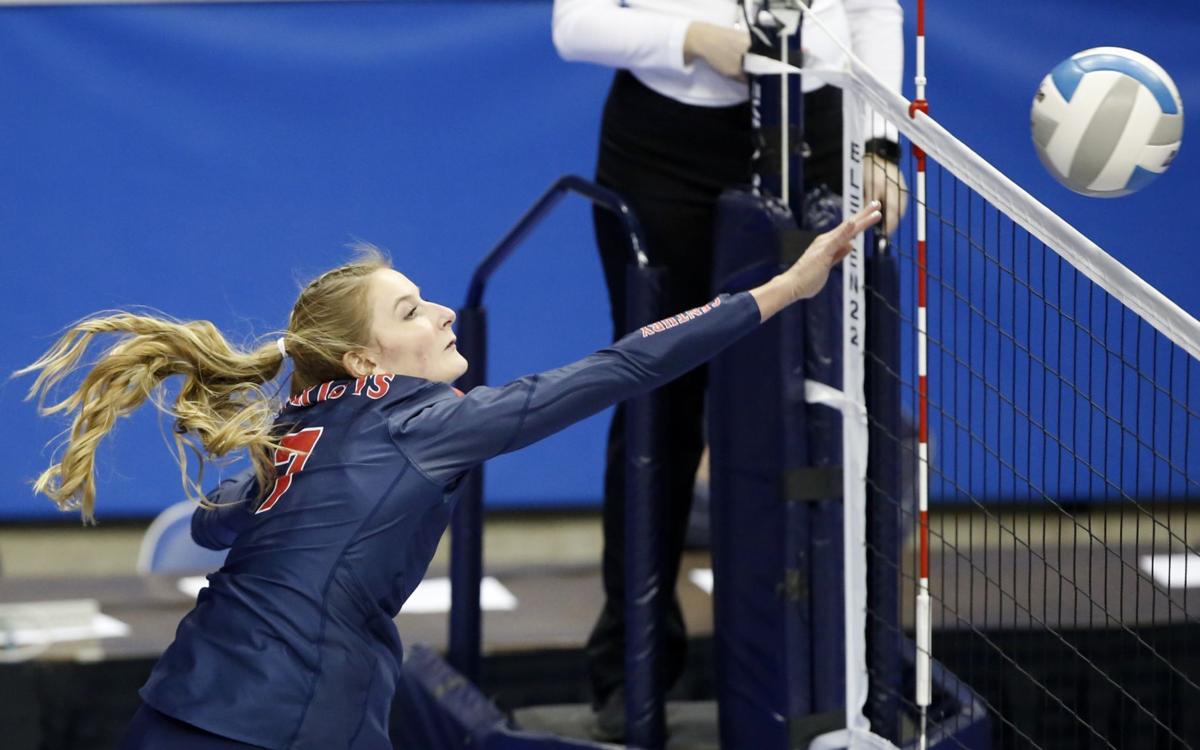 Century's Julia Fitterer (7) hits the ball during the Class A championship match against West Fargo on Saturday night during the state volleyball tournament at the Fargodome. 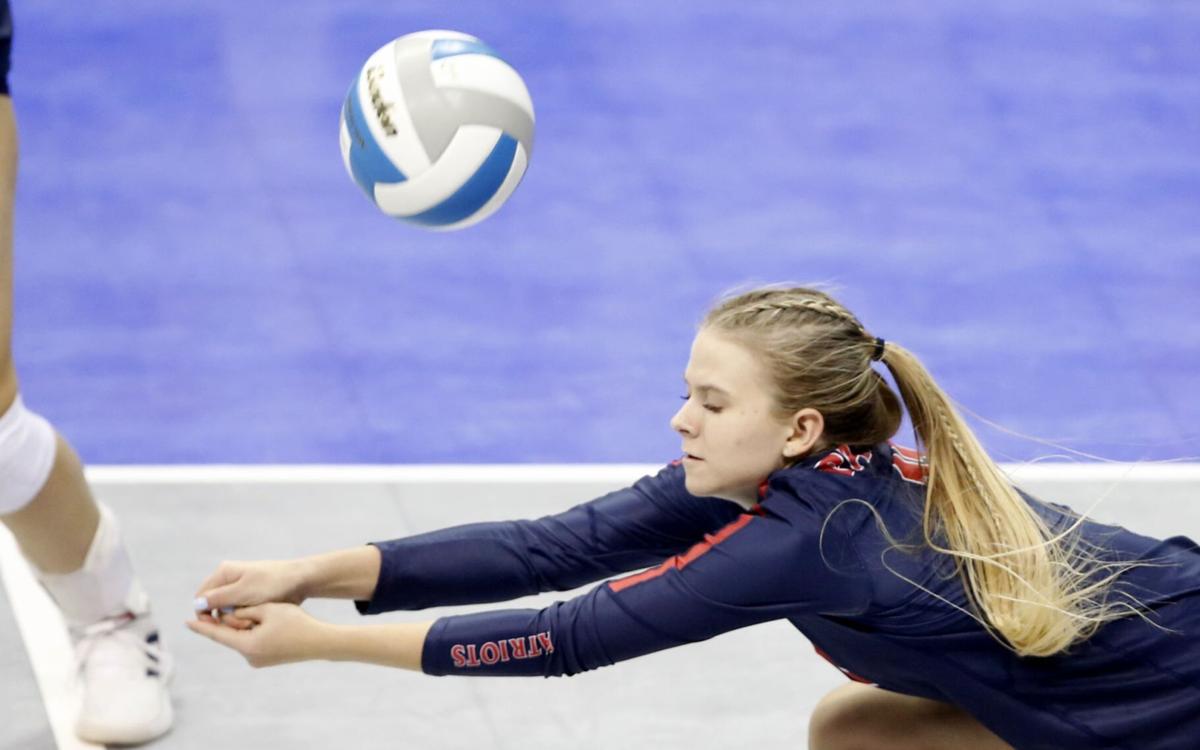 Delani Clarke (11) of Century digs out a shot during the Class A championship match against West Fargo on Saturday night during the state volleyball tournament at the Fargodome.

FARGO — Bismarck Century came up short in the Class A state volleyball championship match a season ago. Saturday night the Patriots wrote a new ending.

Century reclaimed the Class A volleyball crown, bouncing back from a first-set loss to defeat West Fargo 16-25, 29-27, 25-17, 25-19 Saturday at the Fargodome. It’s Century’s fifth state title in the last six years, and sixth in the last 10.

“This is an accomplishment. It doesn’t get old, by any means, but this one is a whole new level,”  Century head coach Jamie Zastoupil said. “This is a different season, there were so many obstacles and kids just showing up. It didn't matter who was out for that game, we had somebody who stepped in. This is the definition of that team win for sure.”

Though it was Century’s 10th straight championship appearance, Zastoupil said her team had some nerves to shake. But once the Patriots settled in, it was all blue and red.

West Fargo, on the other hand, came out swinging in the program's first title match appearance in 12 years. The Packers jumped out to a 6-1 lead in the opening set, and found multiple ways to maintain the upper hand, stretching the margin as wide as nine at 20-11.

West Fargo didn’t allow Century to get more than three consecutive points as they cruised to a 25-16 first-game win. It was the only set the Patriots dropped in the state tournament.

A pair of Olivia Soine aces opened the second set, and West Fargo went on to open an early 9-4 lead. The Patriots put together a 9-3 run to pull even for the first time in the match at 13-13. Century nabbed its first lead at 22-21 and rallied to take the back-and-forth second set 29-27.

“I think No. 1, our blockers started touching a few things to slow it down,” Zastoupil said. “They're a huge team. They block well, they hit well, they've got a number of different weapons on the other side.”

The Patriots rode that momentum into the third game, starting off with a 7-1 lead and building an 11-point cushion. Century had its foot on the gas and never let up to clinch the third game 25-17 on a Claire Bauman kill.

“We had to go within ourselves, go within each other and just trust each other,” said sophomore Logan Nissley, who pounded out 13 kills and had 23 digs. “Another big thing was our momentum and our energy. I think after that first set we really brought that to the table, and that’s what won us the match.”

Century didn’t waste any time getting down to business in the fourth frame. The Patriots held comfortable leads throughout the set and left West Fargo to play catch-up.

Century held strong in the back row and didn’t let the Packers go on any long runs. Nissley finished off the fourth set for Century with a kill.

"Jocelyn Julson played out of her mind back there. Same thing with Logan (Nissley) and Julia (Fitterer)," Zastoupil said. "They dug really well, they attacked our setters and they were able to respond. Definitely a big win in the back row, too."

Julson posted a team-high 28 digs. Julia Fitterer had a match-high 19 kills and 22 digs. Delani Clarke tossed out 20 assists and had 15 digs, while Abby Fletcher added 32 assists and seven digs.

"Century is a really good team. I would say that we in the first two sets played really well," West Fargo head coach Kelsey Gibbons said. "I think after we lost that second set, it kind of took the wind out of our sails and we kind of lost that aggressive mentality. Our serving lightened up, our serve receive loosened up. It wasn’t as crisp and clean."

FARGO — Before the state championship match, Linton-HMB coach Jaime Richter told her team that win or lose, they'd all love each other, so the…

After unbeaten season, Dickinson State waits for NAIA playoffs in the spring

Whatever the frustrations the Bismarck Bobcats experienced in their 2-5 start must have paled in comparison to what came next.

In a very abnormal year, things have been fairly normal for the University of Mary men's basketball team.

North Dakota State and the University of North Dakota opened the season with losses on Wednesday.

Century's Julia Fitterer (7) hits the ball during the Class A championship match against West Fargo on Saturday night during the state volleyball tournament at the Fargodome.

Delani Clarke (11) of Century digs out a shot during the Class A championship match against West Fargo on Saturday night during the state volleyball tournament at the Fargodome.