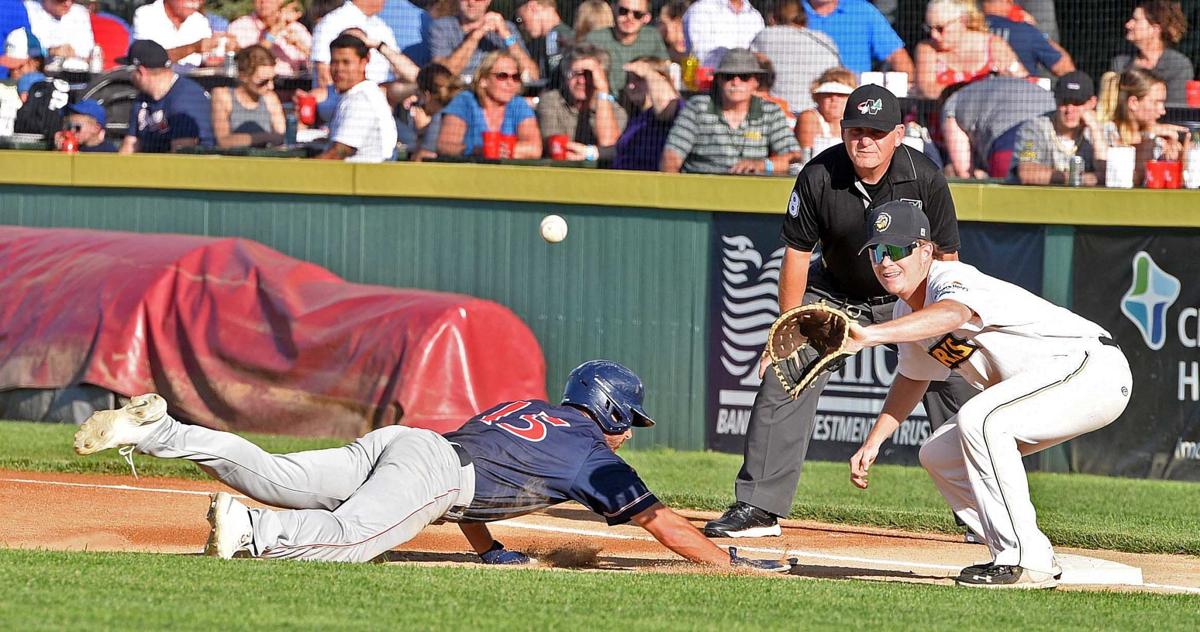 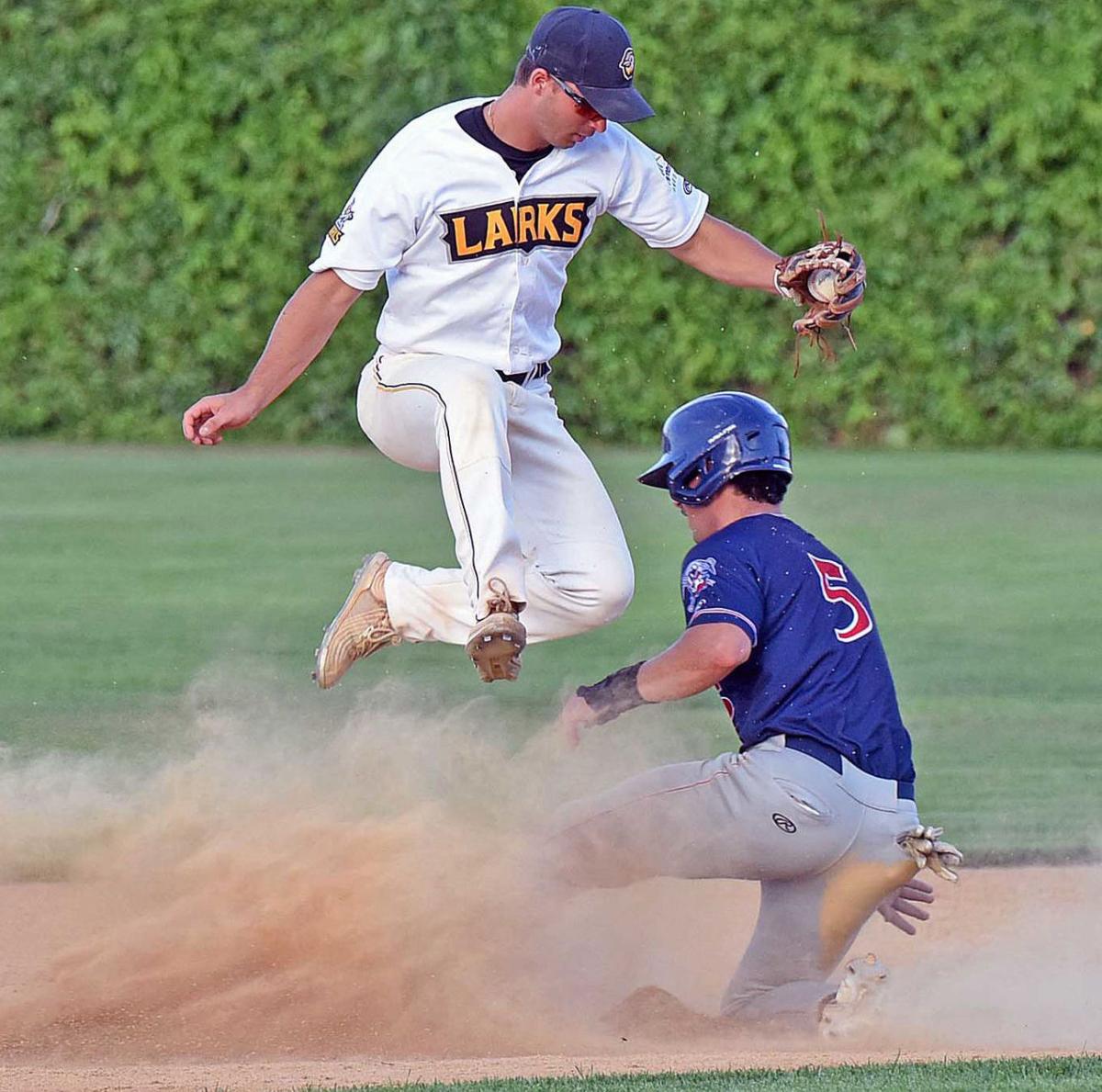 Larks shortstop Jarrett Bickel (31) leaps for the ball as St. Cloud's Otto Kemp (5) slides into second base during Wednesday's game. 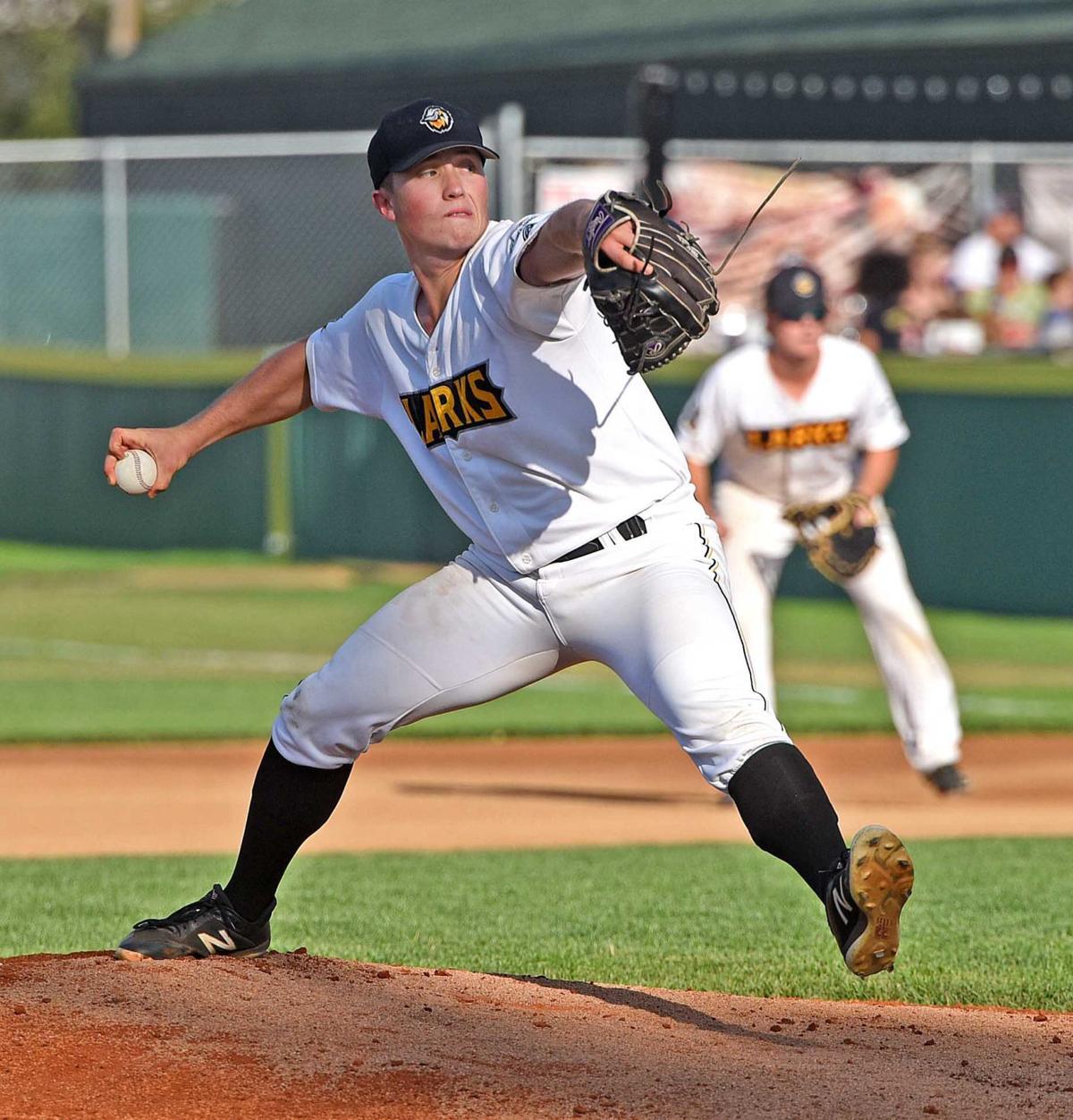 St. Cloud and Bismarck exchanged the lead four times and were tied twice Thursday night, but it was the Northwoods League-leading Rox that ended the game in front.

St. Cloud broke an 8-all tie with two runs in the top of the ninth and held on for a 10-8, 3-hour and 25-minute victory at Municipal Ballpark in front of a capacity crowd of 1,926.

The Larks led 8-6 over the 49-16 Rox after six innings, but were unable to hang onto the lead. The two teams play again tonight at 6:35 in the final home game of the season for Bismarck. St. Cloud has won six of the seven meetings between the two teams.

Jack Steil doubled in Brice Matthews with the go-ahead run in the top of the ninth. Matthews led off the inning with a walk. The Rox tacked on one more when Peter Abinanti scored on a passed ball.

Down 1-0 early, the Larks jumped in front with two runs in the bottom of the second.

Jaxon Rosencranz, who finished 4-for-5 for the Larks, led off the inning with a single to left. Spencer Sarringar followed with a walk to put two on for Ryan Curran. On an 0-1 pitch, Curran sliced a double into right field, scoring Rosencranz to tie the game at 1-all.

After 6-foot-11 St. Cloud lefty Trevor Koenig got a strikeout for the first out of the inning, Jarrett Bickel grounded to third. St. Cloud’s Jordan Barth chose to throw to first, instead of home, allowing Sarringar to score standing up to give the Larks a 2-1 lead.

After Carmack put up three zeroes, the Rox got back on the board in the top of the fifth. St. Cloud sent 11 batters to the plate, five scored. Otto Kemp, who has six home runs on the season for the Rox, ripped a two-run double to the right-field fence to put St. Cloud back in front 4-2. They added two more later in the inning.

The Larks had a quick answer.

On one swing of the bat, Jarrett Bickel made it 6-3 with a solo home run, his first of the summer, over the left-field fence on the first pitch of the inning from Koenig.

Ethan Kleinheider doubled two pitches later and went to third on a single by Cole Roberts.

Brant Schaffitzel dropped down a perfect bunt up the first line to score Kleinheider and make it 6-4. After an error loaded the bases, Rosencranz singled to center to cut the deficit to one (6-5) as Roberts scored.

The 0-1 pitch to Sarringar got through St. Cloud catcher Caleb Ricketts and went to the back stop, allowing Schaffitzel to score the tying run. Sarringar followed with a seeing-eye single to left to score Ben Teel for a 7-6 lead.

Kleinheider led off to start the bottom of the sixth and scored on a ground out by Teel. The Larks stranded runners on second and third, however.

St. Cloud got two in the top of the seventh, on four hits, to tie it at 8-all. Peter Abinanti blooped a single into left with two outs to score Nate Swarts with the tying run.

With the win, the Rox improved their second-half record to 25-8. Their .754 overall winning percentage is nearly 100 points better than the next best team in the league, Mankato (.662).

Larks shortstop Jarrett Bickel (31) leaps for the ball as St. Cloud's Otto Kemp (5) slides into second base during Wednesday's game.