Larks shortstop Cal James, forces out Tyler Keith in a game this summer at Bismarck Municipal Ballpark. At left is Enrique Morales. James was one of several players from the University of Mary to play key roles for the Larks during the Northwoods League season. 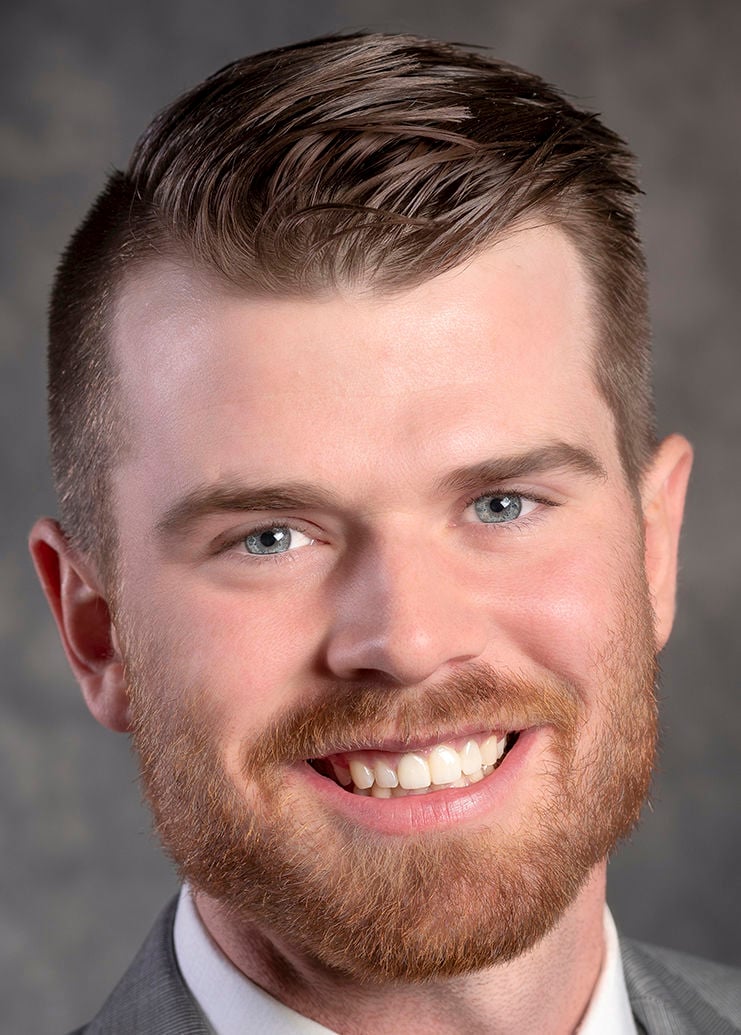 MLB Pipeline is a popular source for baseball fans to keep up to date on the top young prospects in the game.

This Northwoods League season, the player pipeline to the Larks, Bull Moose and Flickertails flowed directly from the University of Mary and Bismarck State College to Bismarck Municipal Ballpark. Tanner Spencer and Michael Keeran, head baseball coaches for the Marauders and Mystics, provided 15 players to keep the NWL rosters stocked, especially after many of the originally rostered players returned home in late July.

“It worked out great. John (Bollinger) and Will (Flynt) and the Larks treat the guys really well and it was nice to get our guys back up here and give them the opportunity to play,” Spencer said. “The circumstances of the offseason were already going to be unique with all the ramifications of COVID. In some situations guys were signed up to play summer ball but ended up having to go home to work to help the family, or in other cases the family wanted their kids to be close during this time.”

Miller, a former Legacy High three-sport athlete, was signed up to play from the start and had a strong season on the mound.

“Paxton was as good as anybody when you look at what he was able to do this summer,” Spencer said. “Anybody that knows Paxton knows what a quality kid he is. To have a kid from Bismarck go out and perform like did, it was great. He’s coming out of the summer with a lot of confidence and we’re really excited about what he’s going to be able to do for us.”

Brooks excelled in a relief pitching role, while James played shortstop and pitched. Both played for the Larks.

“Facing good hitters 1-9 is only going to make you better and Andrew was really, really good right from the start,” Spencer said. “We know what we have with Cal. He’s a really big part of our team. He got off to a great start for us last season as a freshman and we’re really excited about what he’s going to do in the future.”

U-Mary was able to play a handful of games before the 2019 college season was canceled. BSC was shutout. So for Blake Anderson (pitcher, Fargo), Trenton Duchscherer (catcher, Kindred, N.D.), Brayden Koenig (infielder, Fargo), Kyle Leapaldt (infielder/pitcher, Carrington, N.D.) and Kyler Stenberg (outfielder, Minot) the Northwoods League games were invaluable. Tommy Wellens a pitcher at BSC, got the best of both worlds. Wellens pitched for Fargo Post 2 prior to finishing up in the Northwoods League. Wellens went out with a bang. He tossed 5 2/3 perfect innings on Friday in the Larks' title-clinching win over the Flickertails.

“It’s been really big for those guys to be able to get some live at-bats and to be able to get on the mound in actual game situations,” Keeran said. “You can’t simulate live at-bats. You just can’t. In some situations, our guys have been humbled a little bit because you’re facing really good competition. But it’s also been really helpful in that when we start fall ball those guys will have knocked some of the rust off.”

Keeran and Flynt were in consistent contact as players continued to funnel to the three NWL teams.

“Me and coach Flynt were texting or calling pretty much every day for a couple of weeks,” Keeran said.

The BSC head coach knows the drill. He’s coached wood-bat summer baseball each of the past three summers.

“I enjoy summer baseball quite a bit. In the future I’d like to work in the Northwoods League or a league like that,” Keeran said. “I understand the profile of the type of player coach Flynt wanted -- versatile, low maintenance, no issues in the community. It was easy to give a good recommendation for our guys. We knew it’s going to be a great experience for them playing for one of those teams. It worked out really well.”

With the Northwoods League season in the books, both coaches now turn their focus to fall ball.

Spencer and the Marauders get 45 practices, while BSC has 60 dates to use before the snow flies with a couple scrimmages mixed in against other teams.

“There’s a ton of built-in excitement for the guys to get back to campus,” Spencer said. “For the most part it should be a relatively normal situation for fall ball aside from the COVID-related protocols we need to follow. Our No. 1 objective is to keep our guys safe. We really like the group we have coming back. We’re excited to get everybody on campus.”

Keeran is ready to hit the ground running.

“It feels odd to even say the word, normal, but I think whatever normal is now, we should have something resembling that this fall,” Keeran said. “We hope to have a season. We’re going to go 100 miles per hour preparing like we are and then just hope for the best.”

Larks shortstop Cal James, forces out Tyler Keith in a game this summer at Bismarck Municipal Ballpark. At left is Enrique Morales. James was one of several players from the University of Mary to play key roles for the Larks during the Northwoods League season.