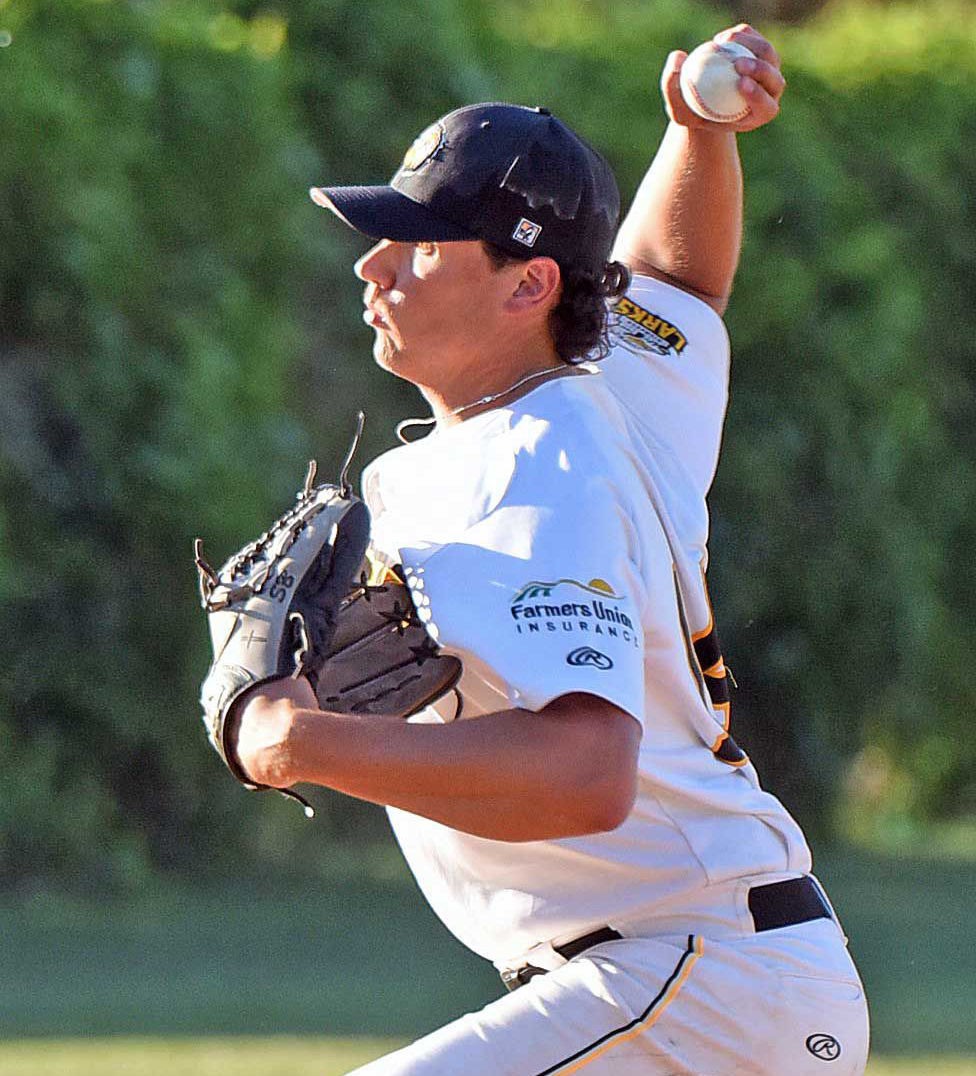 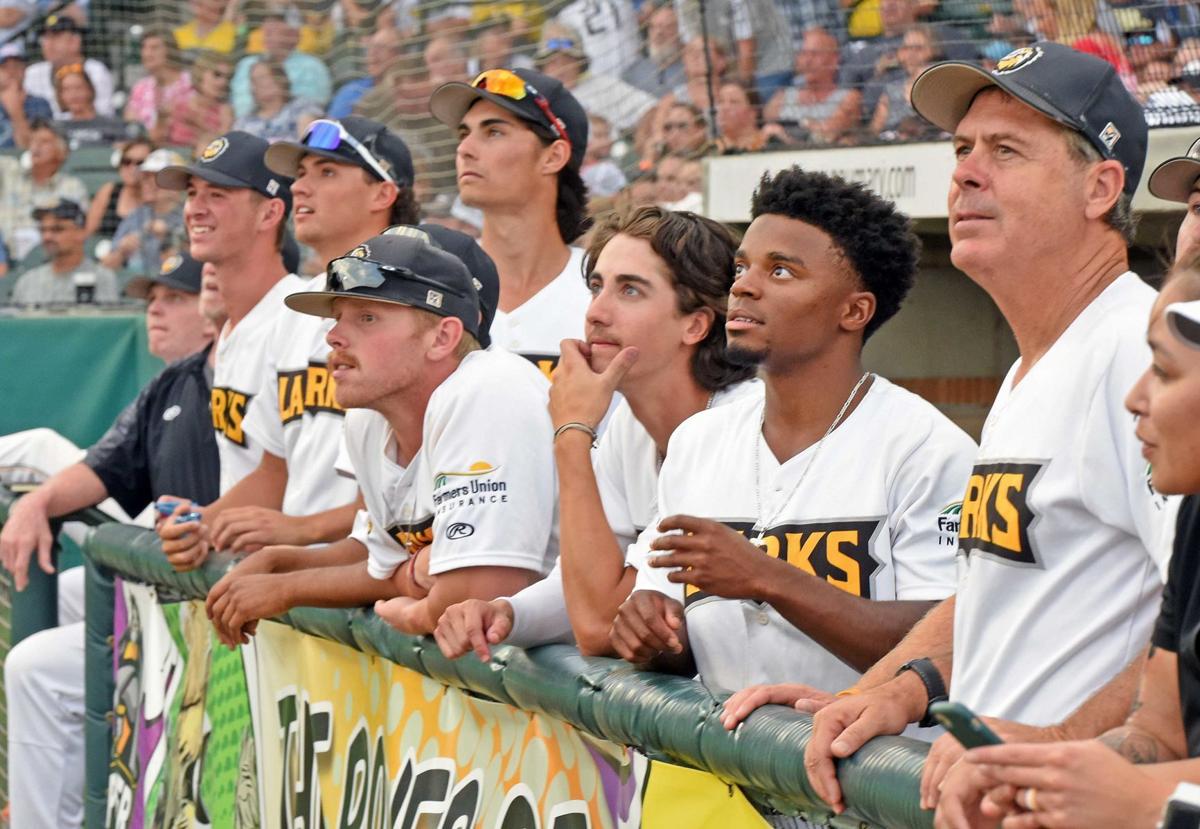 Seth Brewer started the first game of the season for the Larks back in May and Thursday night he was back on the bump for the final home game of the summer.

The result was the same both times -- wins.

Brewer finished the summer 4-2 with a 3.49 earned run average, throwing the majority of his 52 2/3 innings to his college teammate at Northern State, catcher Spencer Sarringar. Both were excellent all summer.

"Those two guys are dudes, I don't care what level they're playing at. They're going to produce," Larks manager Will Flynt said. "Great kids. Terrific players. It was a blast to be around them this summer."

For Brewer, it was another strong season in his second home.

"I've lived in Bismarck the last four years," Brewer said. "I love it here. I love playing for the Larks. Love playing for John (Bollinger) and for Will. It's been a great experience, everything about it."

Sarringar proved to be among the top catchers in the entire Northwoods League. His two-run triple Thursday in the bottom of the fifth inning with two out proved to be the game-winner.

Maybe even better news for the Larks, the Pierre, S.D., product plans to return next summer.

"You always look back at things you maybe wish you would've done better, but overall I'm happy with how the season went," Sarringar said. "We have a great group of guys here. It was a lot of fun to play with these guys this summer. Of course we would've liked to win a few more games, but this is a great league, a lot of talent. It's not easy to win, but we had a lot of positive moments throughout the season and hopefully we can have a few more in the last couple of games."

Scoreless after two innings, the Larks got one in the third and two in the fourth.

Cole Roberts singled with one down in the third and stole second. Brant Schaffitzel singled Roberts home for the first run of the game.

Ethan Kleinheider, hitting ninth in the order, delivered a two-out, two-run double to right in the bottom of the fourth to score Sarringar and Jarrett Bickel as the Larks jumped ahead 3-0.

"Ethan probably hasn't had the summer he was hoping for, but the kid's a good ballplayer," Flynt said. "He's had some really big hits for us the last couple of nights against some good pitchers."

St. Cloud got on the board with two runs in the fifth. Two walks contributed before Peter Abinanti and Jordan Barth produced back-to-back two-out singles to score Jack Steil and Andrew Pickney.

The Larks stretched the lead back to three on a two-run triple to deep right field by Sarringar in the bottom of the fifth. Sarringar has five homers and 33 RBIs heading into the final two games of the season.

"Spencer is such a talented player. Really athletic for as big as he is," Flynt said. "I think this kid just has an extremely bright future."

Brewer's six solid innings were a fitting last start for the right-hander. He worked around four hits and five walks, but he fanned six and allowed just two earned runs.

"Seth is one my favorite kids I've ever worked with," Flynt said. "When we put him out there, we feel like we're going to win and honestly, I just think he's scratching the surface. I legitimately believe he's got a pro future. Just as a total package, as a person, as a player. He's got it all."

Rubber-armed Zach Reeder tossed the seventh and eighth innings to get it to Nate Boyle, who worked a 1-2-3 ninth for the save in front of another full house, 1,953 fans.

"Reeder would pitch every day if we'd let him. Kid's a warrior," Flynt said. "In this bullpen role, he's been awesome. Just love the way he competes."

The Larks had 10 hits and Jaxon Rosencranz had three of them, giving him seven in the two-game series against St. Cloud.

"Jaxon's been out of the best players in the league," Flynt said. "You talk about impactful players, this kid is right there with anybody."

The Larks (11-20) finish the season with road games in Duluth on Friday and Saturday. Record-wise it's not what they were hoping for, but when they were intact in the first half of the season, they were 16-8 and tied for first with St. Cloud, which has blown every other team in the league out of the water through 66 games. The Rox have a winning percentage of .742.

"They're the best team in the league. Give them credit," Flynt said of St. Cloud. "We hit a few bumps in the road, couple things out of our control, but that's OK. It's not an excuse. I've really enjoyed being around these guys, being around our coaches and our fans. Did we want to win more? Of course, but we're treated so great by John and his staff and the Larks, you won't hear me complaining. We're out here playing baseball, man. It's been a blast."