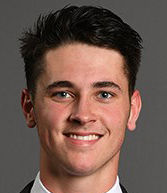 Kawaguchi, a native of Abbotsford, B.C., was named the forward of the year in postseason awards issued by the National Collegiate Hockey Conference on Wednesday. Kawaguchi has also been named USCHO.com national player of the year and earned All-American honors from USCHO and College Hockey News.

Kawaguchi piled up 45 points, the second-best total in college hockey. He led the nation with 13 game-winning points, including five game-winning goals among his 15 for the season. He was a first-team all-NCHC selections and helped North Dakota to a 26-5-4 record, the No. 1 position in the NCAA Pairwise rankings and a Penrose Cup as NCHC regular-season champs.

On Monday, Kawaguchi earned the NCHC's 3-star award for having the most No. 1 star-of-the-game awards (4) in the conference.

Teammate Shane Pinto was also honored by the league on Wednesday, earning freshman of the year honors.

Pinto, a Franklin Square, N.Y., native, tied for the team lead with 16 goals and was named to the NCHC all-rookie team as UND continued its streak of having a player on that list in each of the league’s seven years of existence. He’s the second North Dakota player to earn the freshman of the year award after Brock Boeser in 2015-16.

Pinto scored just twice in his first 11 games but had 14 goals in the final 22 games, including the overtime winner on Feb. 29 against Western Michigan to clinch the Penrose Cup.

North Dakota finished the season with a record of 26-5-4 and were ranked No. 1 in the final PairWise rankings.

If the NBA picks Disney, does the NHL zero in on Las Vegas?

TAMPA, Fla. - As the NHL considers its plans to resume the season, "where" has been as big of a question as "how." If the NBA is zeroing in on a single hub in Orlando, as multiple reports indicate, it may create an opening for the NHL in Las Vegas. The NBA reportedly has had Las Vegas among its site candidates for resuming its season. The NHL is still considering many options, but it seems to ...

The NHL continues to consider options to finish this season, with the selection of multiple "hub" cities appearing to offer the most likely path to accomplish that. Commissioner Gary Bettman said Monday the league is considering "probably eight or nine different places" that could accommodate "a dozen or so teams in one location," according to nhl.com, which quoted his remarks during a digital ...

When Connor Hanson took to the ice rinks as a young player, he dreamed of playing college hockey. At the time, that was a pursuit that would t…