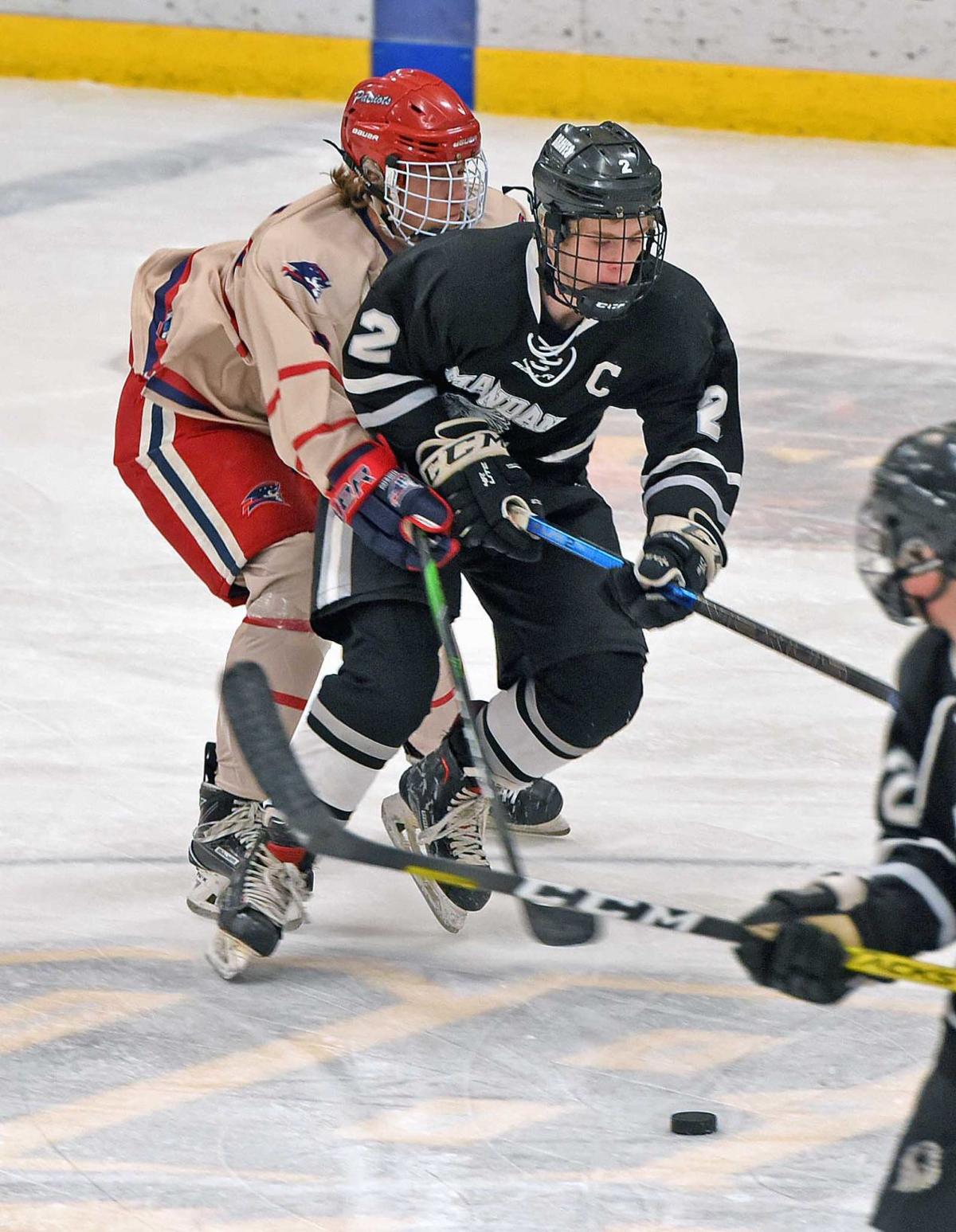 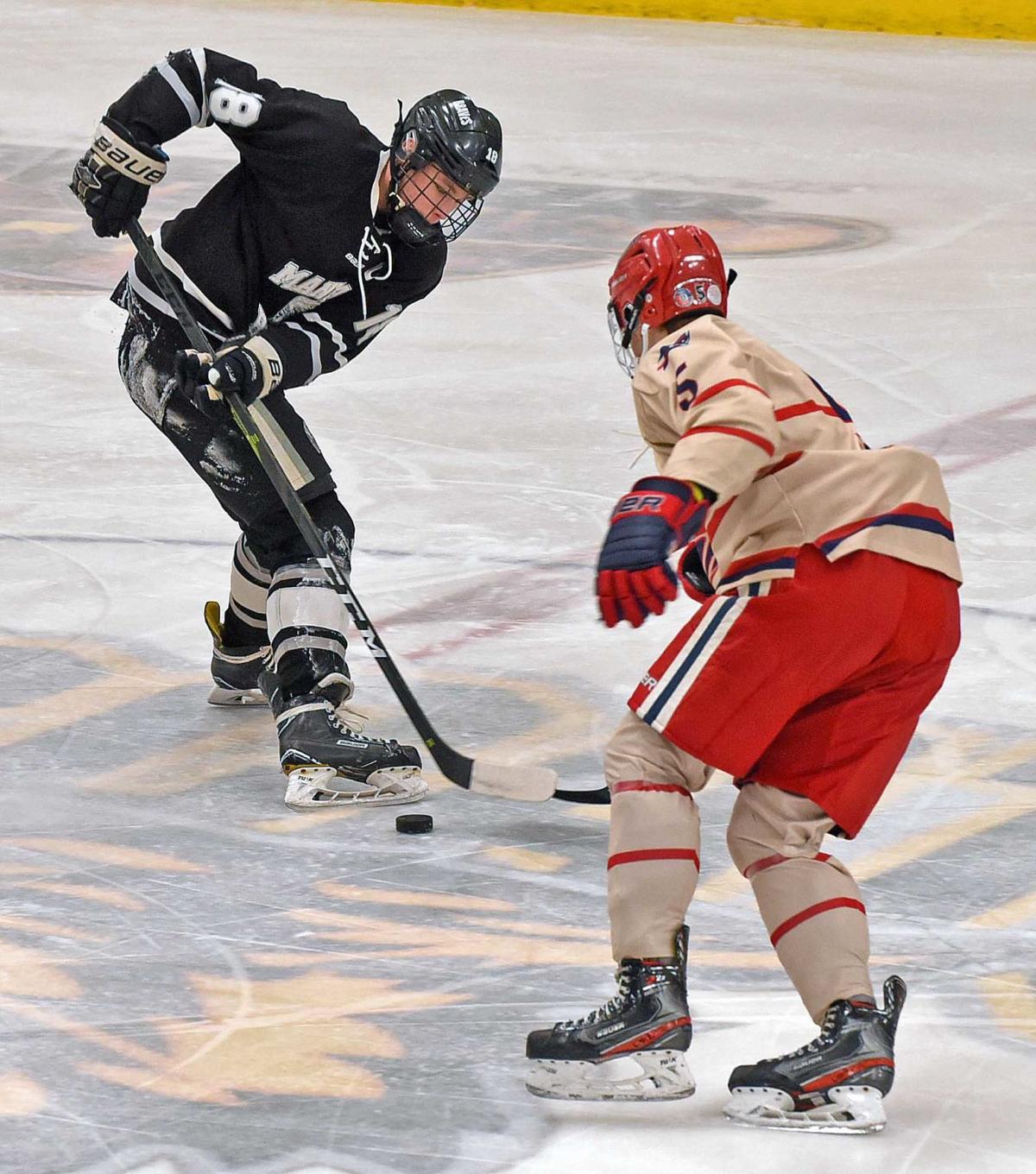 Mandan's Carter Berger, left, gets control of the puck in from of Century's Jadon Reimer, right, during Thursday's game.

A 12-day break in the schedule certainly would not be a hockey coach's first choice, but that's the hand the Century boys team was dealt.

However, the Patriots quickly alleviated any concerns the coaching staff might have had, scoring 19 just seconds into the game. They maintained the momentum throughout, outshooting Mandan 46-18 en route to a 5-1 victory Thursday night at the VFW Sports Center.

Junior forward Colton Schulte, who assisted on the goal, said it came on a low-percentage shot.

Walker skated from behind the right post and released a short-range shot from just behind the goal line.

"It went in off one of the Mandan sticks," Schulte said.

"We came back from 12 days off like that and shook the rust off pretty early," Olson said.

Schulte put Century on top 2-0 with a drive from just inside the blue line. The shot found the upper right-hand corner of the net with 8:42 remaining in the first period.

Cullen Curl scored a short-range goal in the middle of the second period to give Century a 3-0 cushion before Mandan responded.

Century took four minor penalties in a span of 3:14 to leave the door wide open for Mandan.

The Braves took advantage with two Patriots skaters still in the penalty box. Carter Berger scored on a rebound with 7:23 in the period to shave the Braves' deficit to 2-1.

Olson was not pleased with the flurry of penalties.

"That was a complete lack of discipline on our part. I thought our guys checked out mentally," he said. "We've got to do a better job of being fully present the entire game."

Thomas Odegaard corrected that damage by scoring for Century two minutes later. Walker stole the puck in the neutral zone and charged in on Mandan goalie Zane Clausen. Clausen stopped Walker's shot, but had no chance on Odegaard's rebound with 5:24 to play on the middle period.

Austin Wald scored a power-play wrap-around goal early in the third period to give Century a 4-1 advantage.

That set up the final goal of the night, an empty-net tally by Jadon Reimer with 2:02 to play.

Schulte said scoring so quickly in the first period gave the Patriots control of the game.

Century now has six wins in its last seven starts. One of those was a 5-0 victory at Mandan in December.

Schulte said that surge is indicative of some positive things in the CHS locker room.

"The team is kind of coming together. There's team camaraderie. Everyone is stepping up and playing for each other. That's what you need when it comes to WDA and state (tournaments)," he noted.

Thursday's loss was only Mandan's second in the last six games. The Braves have a week off before playing host to Minot next Thursday.

Century takes the ice again on Tuesday when it Dickinson visits.

Olson said Thursday's effort was an encouraging way to come back from a long layoff.

"I liked our 5-on-5, especially. We played smart with the puck and got it to the net," he noted.

Amid virus outbreak, concerns about a hockey stick shortage

Jack Eichel snapped his stick over the crossbar in frustration after an empty-net goal sealed a Buffalo Sabres loss, splintering it across the ice. He and other NHL players might want to think twice about sacrificing their sticks in a situation like that for now.

Hurricanes to host Draisaitl and the Oilers

Edmonton Oilers (31-21-6, second in the Pacific Division) vs. Carolina Hurricanes (33-21-3, sixth in the Metropolitan Division)

Washington Capitals (36-15-5, first in the Metropolitan Division) vs. Colorado Avalanche (33-16-6, second in the Central Division)

Canucks to host Kane and the Blackhawks

Chicago Blackhawks (25-23-8, seventh in the Central Division) vs. Vancouver Canucks (31-21-5, first in the Pacific Division)

Minot beats Bismarck, surges to top spot in the West

With first place in the West Region on the line, the Minot High School hockey team turned to its defense.

Wild to host Sharks on Saturday

Washington Capitals (37-16-5, first in the Metropolitan Division) vs. Vegas Golden Knights (30-22-8, third in the Pacific Division)

Mandan's Carter Berger, left, gets control of the puck in from of Century's Jadon Reimer, right, during Thursday's game.