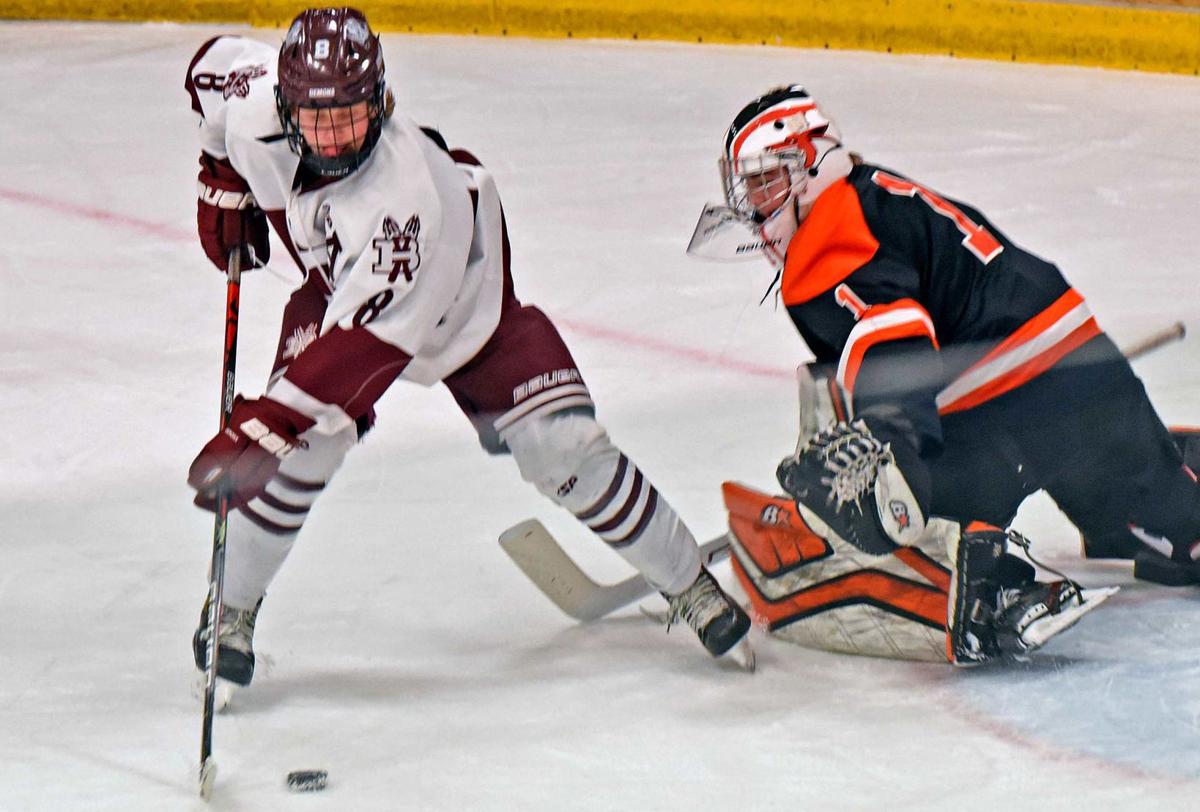 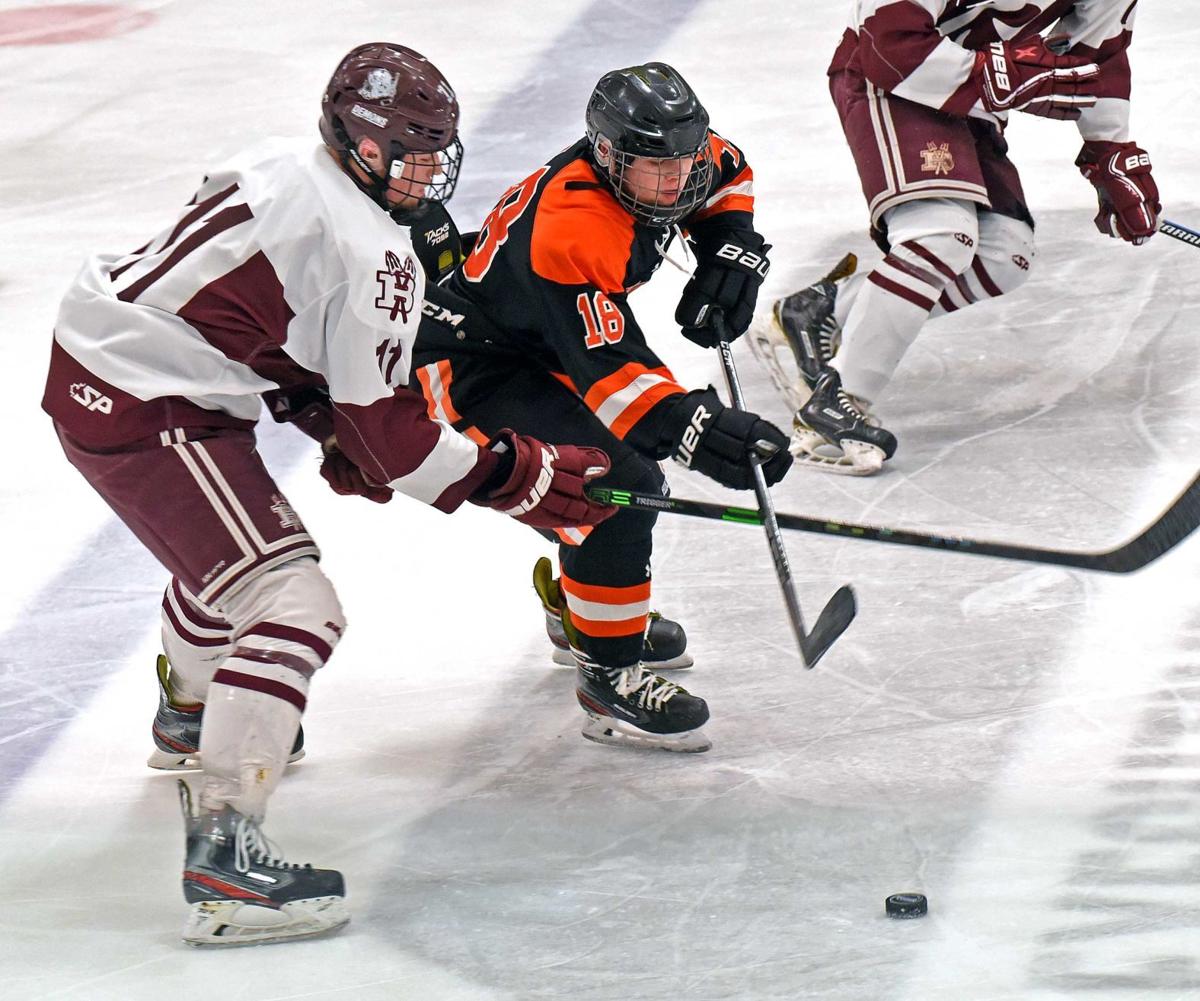 Williston's Ashton Collings knew his goal was big. The second it settled in the net early in the second period of Tuesday's playoff hockey game, he knew the Coyotes had taken a big step toward victory.

He was right. Collings got Williston started on a 4-1 victory over Bismarck in the quarterfinal round of the West Region tournament at the VFW Sports Center. The win marks a long first stride in the Coyotes' quest to reach the state hockey tournament for the first time since 2010.

"(The win) was very useful. I think we have a great shot at beating Century and a great chance of going to state," said Collings, a junior forward.

The Coyotes, meet top-seeded Century, a quarterfinal winner over Mandan, Thursday in a semifinal game in Bismarck. A state tournament berth is on the line in that contest.

Tuesday's outcome also puts the Demons in a corner as they attempt to add to their string of 31 straight state tournament appearances. They take on Mandan in a loser-out showdown on Thursday in Bismarck, the first of two must-win games.

"There's no tomorrow," BHS coach Wes Carr noted. "It's got to be now."

As Williston and Bismarck skated through a scoreless first period, Collings said he knew the first goal became increasingly important. He knew if the Coyotes could score first, Bismarck, averaging 3.1 goals per game, was ill-equipped to play catch-up.

Collings' goal came out of nowhere. Bismarck, after outshooting the Coyotes 11-8 in the first period, came out flying to start the second session. They launched six shots, only one on net, in the first two and one-half minutes. Williston's response was four icing whistles.

Then, with 3:18 expired, Collings beat BHS goalie Logan Hendrickson with a high drive from the top of the slot. The Coyotes were on their way.

"The first goal boosts our confidence and gets us started off well," Collings noted.

Hendrickson and Williston goalie Mason Haugenoe, both playing well, kept it a one-goal game heading into the third period.

Williston survived the game's only penalty early in the third period and opened a 2-0 lead at 5:48 when sophomore defenseman Haden Bergstrom scored on a drive from the right point.

Junior forward Remington Richardson got BHS on the scoreboard at 8:42, scoring a rebound goal from a scrum in front of the net.

A rebound goal by sophomore forward Landon Thiessen put Williston up 3-1 with 4:55 to play, and forced Carr's hand. Carr pulled his goalie for an extra attacker.

Williston took advantage of the empty-net possibility as senior forward Kyle Mischke connected on a three-line goal with 2:49 to play. That proved to be the game's final goal.

Bismarck, seeded fourth, had the home ice advantage over fifth-seeded Williston. Yet Coyotes coach Tyler Jundt said Tuesday's outcome was in no way an upset.

"Maybe people will think this is a surprise or upset, but this an expectation for us," he said. "Everyone in our locker room expected to get a win."

Bismarck and Williston had battled to a standoff in the regular season. Williston won 4-3 in a shootout at Williston in January and Bismarck claimed a 5-4 overtime decision early this month.

Jundt, in his sixth year as Williston's head coach said Tuesday's win broke new ground. None of his previous teams had won a regional quarterfinal. He said the Coyotes were opportunists.

"We didn't get a ton of opportunities, but we capitalized when we did. I was really proud with the way our guys stuck with the game plan. We've had an issue with attention to detail in our defensive zone, but this is the best we've done all year."

Williston assistant coach Jordan Nelson had special praise for the Coyotes' defense with the game on the line.

"I think our third period was the best (defense) of the year, especially the last few minutes. ... We made some adjustments and the guys bought in and finished the hockey game the right way," he said.

Collings heaped praise on Haugenoe, a junior in his second season as a starter.

"We played well in the defensive zone. We backchecked, kept the puck out of crease and cleared rebounds," he said. "We rely on our goalie a lot. ... He's just a great overall goalie."

Carr said falling behind in the second period was a turning point.

"They really come at you, and if you don't score right away they'll make you pay for it," he said. "And their goalie is pretty good, too."

Carr said the Demons have their work cut out for them.

"The road is going to be pretty tough now," he observed. "We play (Mandan) and as of right now it looks like we're going to have to play Jamestown to get to the state tournament."

Third-seeded Jamestown was upset 7-4 by Bottineau-Rugby in Tuesday's quarterfinal at Jamestown.

NOTES: Miles Stiefel, a junior defenseman for BHS, went down in the middle of the second period and didn't return. Carr said Stiefel suffered a concussion and will not play for the remainder of the regional tournament.

Blizzard hope to build on comeback win over Mandan

The Bismarck Blizzard recovered from a slow start to the postseason.

Eaglestaff pours in 39 points as Demons top Dickinson in shootout

Century will take a 12-game winning streak into the state hockey tournament.