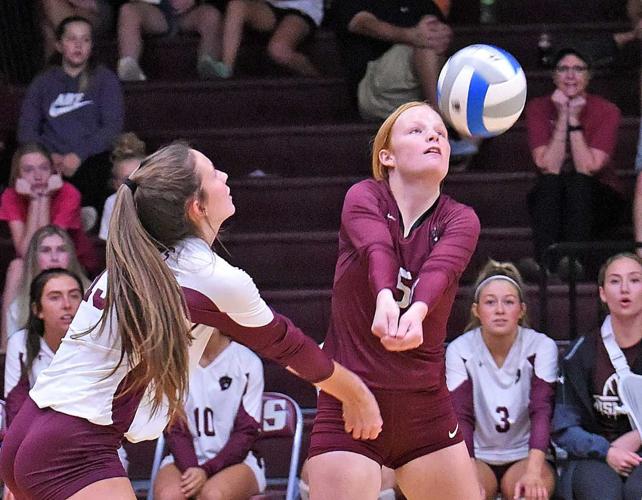 Bismarck's Mia Hinsz (5) plays the ball in front of Kenadi Renner during Tuesday's match against Century. 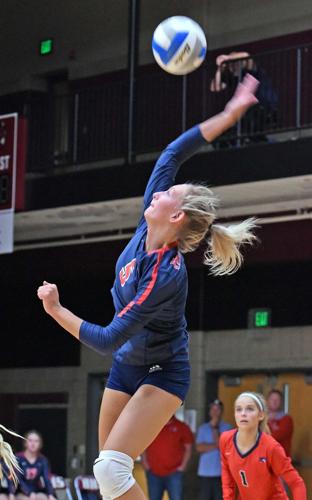 Century's Camryn Harter goes up for an attack attempt during Tuesday's match against Bismarck.

As the saying goes, two teams enter, one team leaves.

In this case, two teams entered Tuesday night's volleyball matchup at Bismarck High School undefeated in West Region volleyball, and Century was the team that left with their conference loss column unblemished as they swept the Demons, 25-14, 25-23, 25-21.

"This is always a big matchup for us because it's a crosstown rivalry and it's a game our kids are excited to play in," said Patriots assistant coach Sara Bohrer, who led the Patriots with head coach Jamie Zastoupil not in attendance. "Our kids played cohesively tonight, they played as a team, and they were out there to win as a team."

"We talked in practice about the energy we needed on our side of the court and we needed to push through our errors and let them go so we could play our game of volleyball," Bohrer said.

One of the big keys to Century's dominant performance in the opening set was their almost error-free play, as the Patriots limited mistakes and played within themselves as they quickly pulled towards the finish line.

"It's one thing we always talk about, playing a clean volleyball game," said junior outside hitter Logan Nissley after leading the Patriots in kills with 13. "Playing clean volleyball is something we prioritize and I think we did a good job of that tonight."

Neither team was able to put together that sort of run through the other two sets of the match, but in both the second and third sets, the Demons held leads of two or three points early, before the Patriots fought their way back into the lead. The match was tied at both 20 and 21 points in the second set, but a 3-0 run by the Patriots followed by a 2-0 run by Bismarck forced Bohrer to call a timeout.

"We watched a lot of film, so we looked at, and knew their tendencies," Nissley said. "Midway through the game we figured out a plan. Our preparation definitely helped us get the win."

That's when Nissley, her right arm swinging hard, sent a ball to the floor along Bismarck's side of the court gave her team a 25-23 set 2 victory.

"We have a lot of trust in each other," Nissley said. "That comes into play a lot, especially when we're in a tight match like this. We trust our back-row players and trust our hitters can find their spots. That trust is big for us when sets and matches are this close."

It seemed as though the third set would be when the Demons would begin their comeback. They took the first three-point lead of the set at 6-3 and seemed to have the Patriots out of sorts for the first time in the match.

But a hard push on both offense and defense by the Patriots tied the game at seven, 11 and 13-all. The Patriots pushed ahead to take their third straight 15-13 lead into the media timeout.

"Our setters did a good job of splitting the pins and making sure we were using all of our hitters so their blockers weren't sure where to go," Bohrer said. "Hats off to them and our back row."

A diving play by Patriots libero Jaycie Clarke keyed a run, and the Patriots took as much as a six-point lead on the Demons as the end of the match drew near.

"[Clarke] is one of, if not the, most positive player on our team. She's determined and for her, no ball drops easy and she runs every ball down," Bohrer said. "Hats off to Bismarck High for keeping it close and that rally. We focused on point for point instead of the end result because we knew if we did that, we'd get the job done."

Seniors Emily Stonecipher and Kenadi Renner tied for the Demons' lead with 11 kills apiece. Behind Nissley, Dylan Dennis finished with 10 kills and a block of her own. Macy Fridgen added nine kills.

Century closes out their September schedule with a home match against Mandan on Thursday, while Bismarck hosts Minot.

"She's a legend," says Rafael Nadal on Serena Williams ahead of her retirement

This extreme athlete brings his wheelchair to the next level

This extreme athlete brings his wheelchair to the next level

Bismarck's Mia Hinsz (5) plays the ball in front of Kenadi Renner during Tuesday's match against Century.

Century's Camryn Harter goes up for an attack attempt during Tuesday's match against Bismarck.