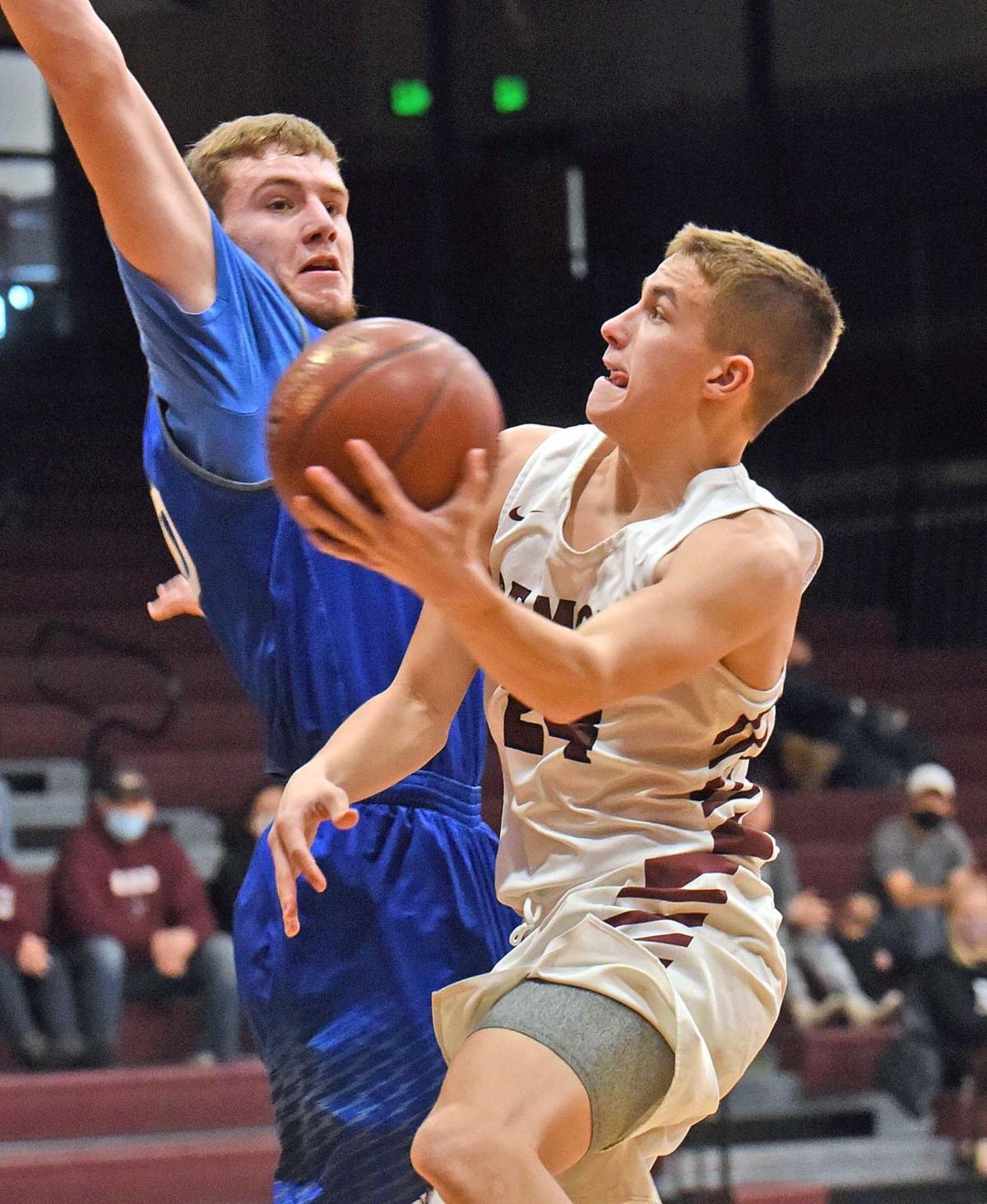 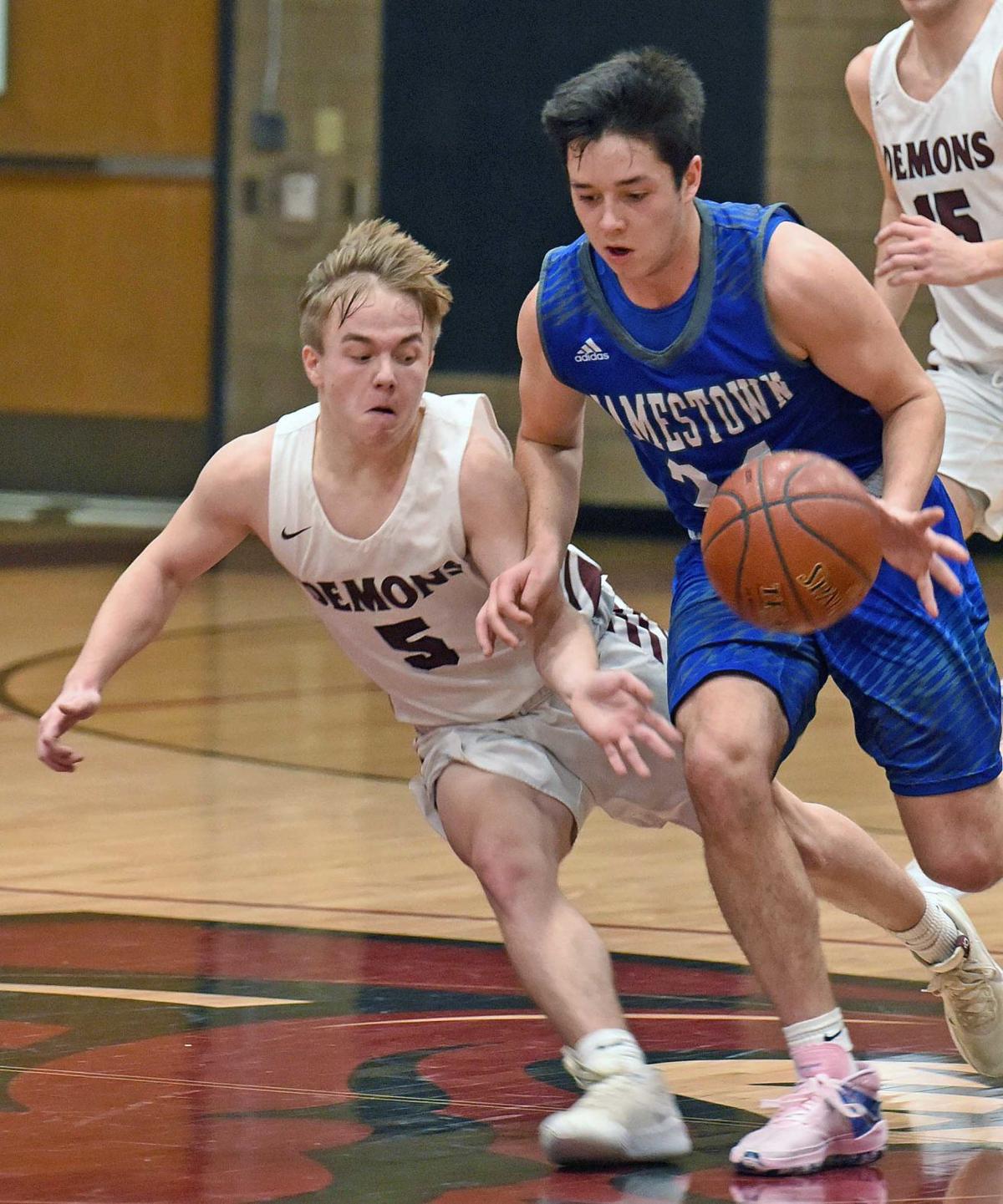 Unable to find the range from deep all day, Max Tschosik made one when it mattered most.

The Demons trailed by 13 points in the first half, and 64-61 with 2 minutes to play before stealing it late on their home floor.

Tschosik’s triple from the top of the key, following a timeout, proved to be the game-winner. The 5-foot-11 Bismarck State College commit remained confident one would eventually drop.

"I hadn't hit one all game, it was a little frustrating," he said. "Every time I shoot I think it's going in, but that didn't happen today. Luckily the last one went in."

Just the fifth game of the season for the Demons, and fourth for Jamestown, the afternoon tipoff had a tournament-style feel. The two teams combined for 38 fouls and 44 free throws.

"Both teams knew it was a big game and we have a history," BHS head coach Jordan Wilhelm said. "We played against each other in the West Region championship game last year and both teams felt like they had something to prove tonight.

"Jamestown's terrific. They're a very good basketball team. I'm proud of our kids for finding a way to gut this one out."

Tschosik's driving layup with 90 seconds left tied the game at 64-all. After empty possessions by both teams, BHS had possession with 30 seconds remaining. Tschosik broke free for an open look and knocked it down, putting the Demons up 67-64.

"It felt good out of my hand. I needed one to go down and it finally did," Tschosik said. "We just kept working. Even when we were down 13, we just kept our heads down and stuck with the system. Jamestown's really good, but we never feel like we're out of a game."

On Jamestown's ensuing possession, Gunner Swanson blocked Brooks Carroll's 3-point attempt in the closing seconds. Despite calls for a foul, and it was close, the whistle did not blow.

"I gave our kids props after the game because I thought this was the first time all season we saw some glimpses of our team from last year," Wilhelm said. "What made the 2020 team so special was they never worried about the score. They never worried about what was going on on the court. They just played our style and our way."

It teetered in the first half, though.

"That was one of those tipping points where are you going to answer, or are you going to let it go from 10 to 20 and be in big trouble," Wilhelm said. "But our guys showed resiliency to take that thing right back down by halftime to a couple possessions."

The Blue Jays played the last 7 minutes without 6-7 senior Keith Levin, who had been a force on the backboard and finished with 12 points. Lamp's 22 led Jamestown, which has dropped two straight.

"I wasn't too happy with our rebounding in the first half," Wilhelm said. "We made a couple adjustments at halftime and I thought we had a much better mentality on the glass in the second half. We're going to be out-sized most nights, so we need to rebound in sheer force of numbers, work ethic and mentality."

After a season-opening loss to Mandan, the Demons have won four straight. They host unbeaten Century on Tuesday.

"Century's looking pretty good. That's going to be another tough one," Tschosik said. "For us, we're a work in progress. We probably didn't start out like we hoped to, but we're getting back to where we need to be. We're going to keep working hard at practice and improve hopefully every day."

Sabers stellar down the stretch in narrow win over Century

No. 1 Century holds off Legacy to remain unbeaten

A 13-point lead had dwindled to a one-possession advantage with three minutes to go.

An easy hat trick in hockey? There is no such thing. However, it would be safe to say one-third of Remington Richardson's hat trick against H…

To the high school wrestling aficionado, the roll call of Bismarck Rotary  tournament champions includes the names of some great high school w…

Wes Carr is starting to see some positives in the early going from his Bismarck Demons hockey team.