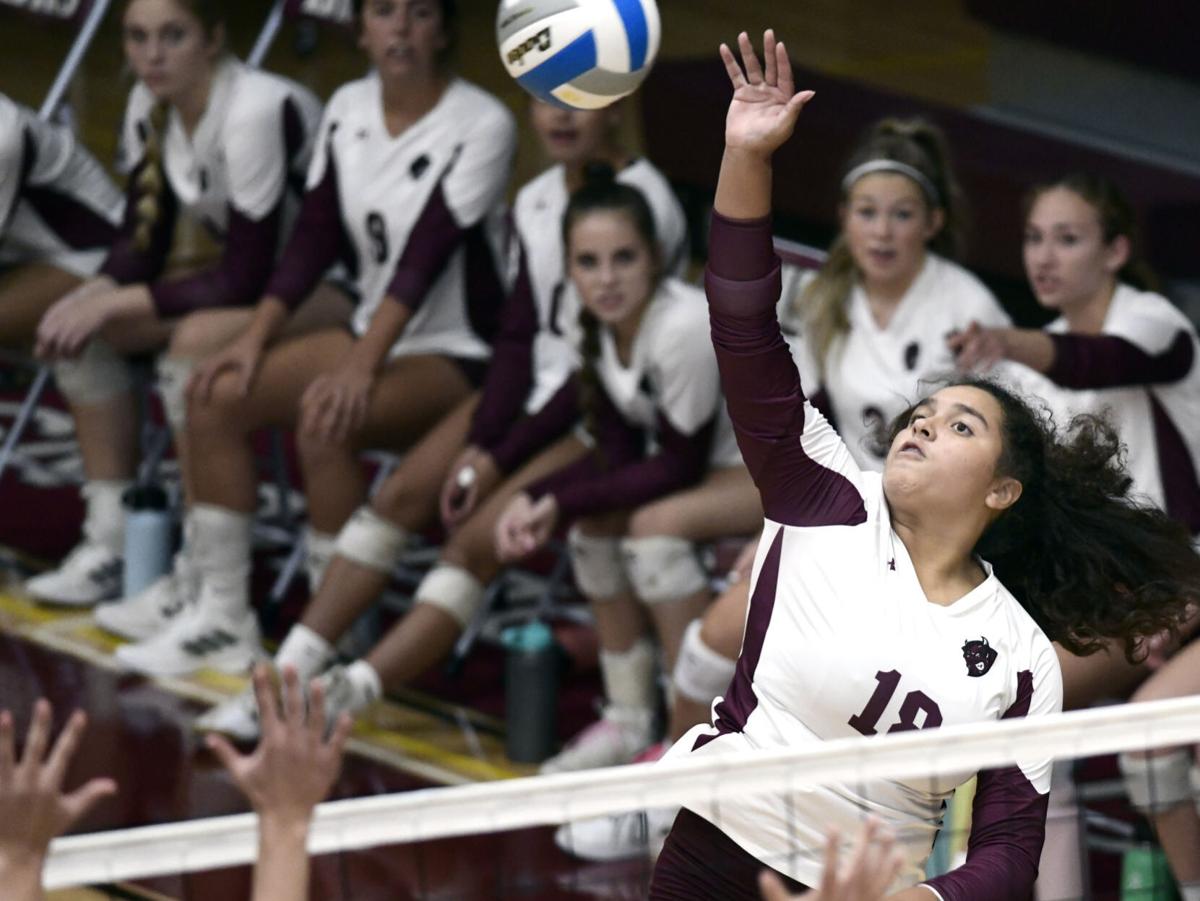 Bismarck outside hitter Tayla Andersen hits a kill across the net against Dickinson during Tuesday night's match at Kaarlgard Gymnasium. 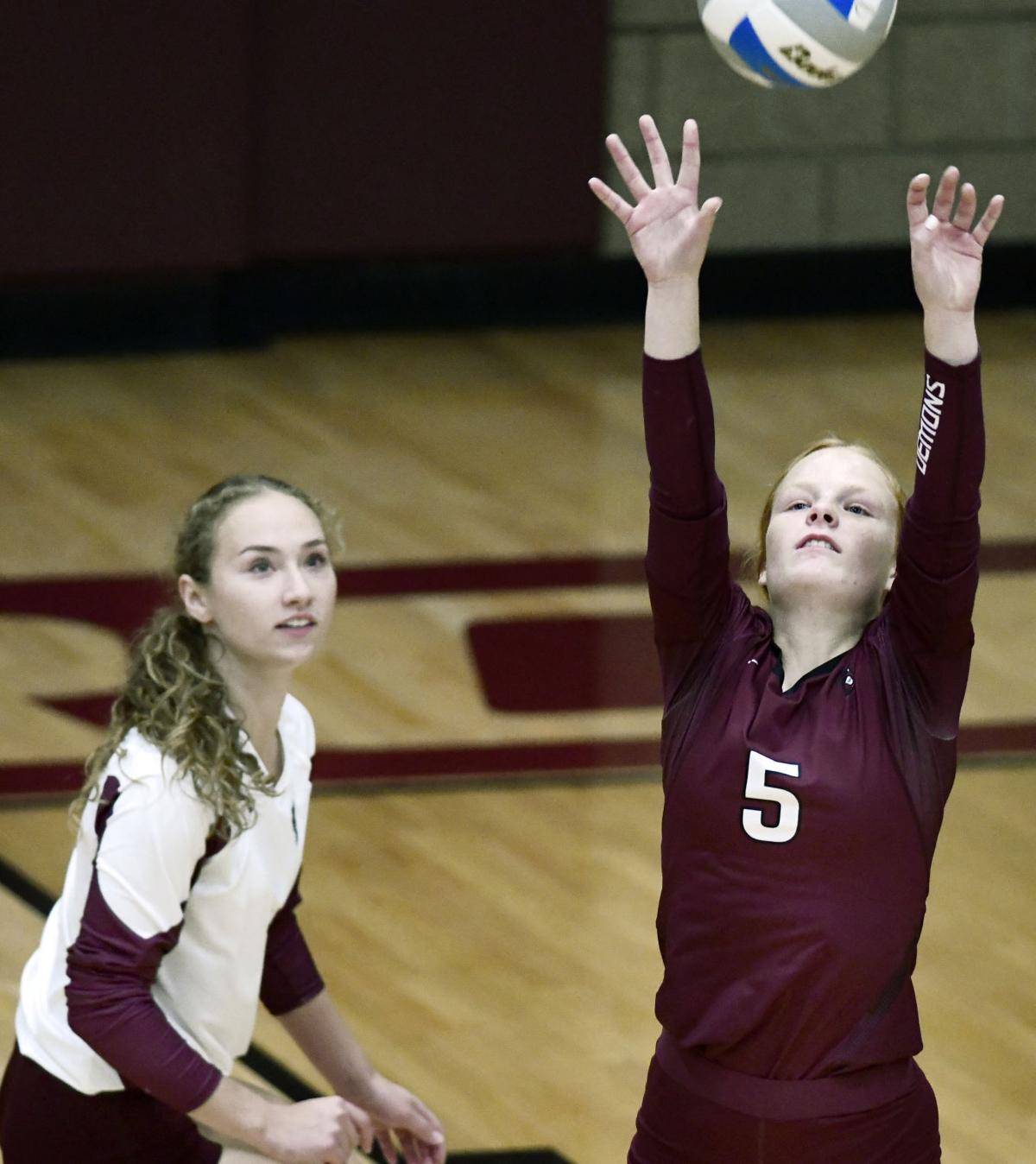 Bismarck's front row had a great night in Tuesday night's 3-0 volleyball victory over Dickinson, but it's not manifested in the offensive statistics.

Dickinson's hitters had few open looks and too many errant hits as BHS blockers consistently got their hands on the Midget hitters' shots. The Demons were credited with just three blocks, but they were completely successful in disrupting the Dickinson attack.

The Midgets' 12 kills were marred by 14 hitting errors.

"We've been working on blocking really hard lately," said Kenadi Renner, a 5-foot-10 senior who is playing her third season on the BHS varsity. "We knew they set pretty high and we adjusted to that. ... It's hard to time them. A lot of times we jump too early."

Dickinson, coming off a 2-17 season, was off to a 5-4 start with a 1-1 West Region record going into Tuesday's match. Renner said it was hard to figure out what the Demons were getting into.

"We expected to win, but you never know what's going to happen with them. They're a scrappy team," she said.

It didn't take BHS long to assert itself in any of the three games.

There were only six ties in the entire 59-minute match. The first game was knotted at one, two and seven and the third set was deadlocked at three, four and five. Bismarck ran off to a 9-0 lead in the second game behind the service of Payton Foster.

Dickinson could get no closer than six points after Bismarck's 9-0 blitz to start the second set. BHS closed with a five-point run to end the set 25-12 on Renner's kill.

After skirmishing through the first 10 points, the Demons took command of the third set with an 11-4 burst for a 16-9 advantage. Emmery Schmitz, a 5-4 junior, ended the third game, and the match, with her only kill of the evening.

Schmitz was one of several reserves that BHS coach Brianna Kline began working into the lineup in the middle of the second game.

Although Tuesday's win was decisive, Kline said it fell well short of perfect.

"We need to keep it clean on our side and limit our unforced errors," she observed.

After four straight wins, Renner said she likes what's going on with the Demons.

"As a team, we've been working really well together," she noted.

Renner paced the BHS attack with 13 kills and added 16 digs and an ace to her night's work. Foster logged 35 assists, while Emily Stonecipher and Gyeneveve Burchinal served two aces apiece.

Sadie Stevenson, a 5-8 sophomore, and Caton Pearcy, a 5-9 junior, were credited with five kills apiece for Dickinson.

Both teams play next on Thursday. Bismarck will visit St. Mary's and Dickinson takes on Mandan in Dickinson.

Mandan's girls hockey team got about as tough of a home opener as you can handle last week, as they fell 4-1 to last year's second-place finis…

Before Saturday night's match between the Bismarck and Century Patriots, the Patriots and Grand Forks Red River were tied atop the all-time ch…

An unfamiliar opponent, an unfamiliar arena … but in the end, it turned into a familiar postseason result for the Century Patriots.

The postseason arrived early for Shiloh Christian and Grant County.

Bismarck High has been the only team to beat Century this season.

For all the hype that came before it, when all was said and done, the state swimming and diving meet came down to the final 100 yards of the 4…

Northern Cass was not going to be denied.

"This leg will never be what it used to be", but Tiger is 'on the positive side'

"This leg will never be what it used to be", but Tiger is 'on the positive side'

Bismarck outside hitter Tayla Andersen hits a kill across the net against Dickinson during Tuesday night's match at Kaarlgard Gymnasium.