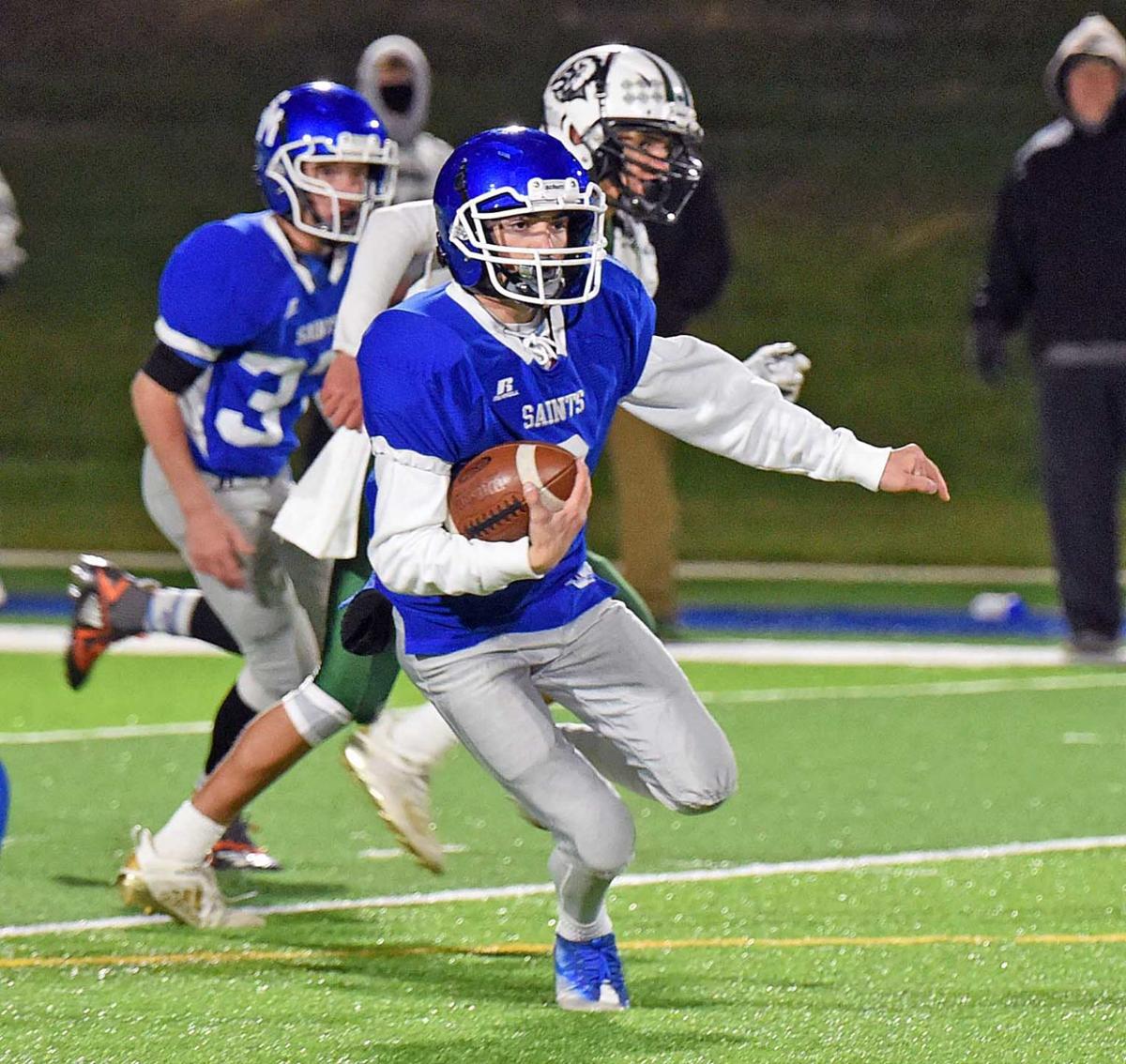 St. Mary's Sam Fedorchak runs for a touchdown in the fourth quarter of Thursday night's game at Smrekar Field.

SCOOTER PURSLEY For The Tribune

Top-ranked St. Mary’s lived up to its rank in Class AA football with a 46-6 rout of undermanned Hazen Thursday at blustery Smrekar Field in Bismarck.

The unbeaten Saints scored on six of their seven first-half possessions and fumbled the ball away on the one time they didn’t get into the end zone.

The Saints piled up 410 rushing yards and came within 50 seconds of notching another shutout. They have outscored seven opponents 275-27 this season.

Hazen, dressing just 21 players with 24 missing due to injuries and COVID, gave up more than 300 yards in the first half, with 294 of that on the ground.

“They’re in a tough situation and our kids came ready to play,” St. Mary’s coach Dan Smrekar said. “We came out of the gates ready to play and that made a difference.”

The second half was played with a running clock, but that didn’t stop the Saints from having six ball-carriers with at least 43 yards on the ground.

The Saints defense forced one of a series of three-and-outs to start the game, leading to a six-play, 45-yard drive capped by the first of Cullen Curl’s two touchdowns in a little over a quarter of play. He led all rushers with 86 yards on eight carries.

Curl’s first TD covered eight yards and he also scored on a 22-yard run on the next possession.

Thomas Jackson, who had 37 yards, added an eight-yard run, Matt Nathe scored on a 1-yard run and would have had a 56-yard TD run, but he fumbled going into the end zone and Dave Nordberg fell on the ball for the score. Nathe had 70 yards in the first half.

Jaxyn Richter closed the first-half scoring with a 5-yard run with 41 seconds left to make it 40-0. He had 45 yards on the ground.

It stayed that way under a running clock until the fourth quarter when St. Mary’s freshman quarterback Sam Fedorchak ran an option left and cut back up the middle of the field and raced 62 yards into the end zone.

Fedorchak replaced Nick Schumacher, who replaced starter Jackson Uhler as the Saints pulled away. Uhler completed all three of his pass attempts for 24 yards.

The Bison got on the board when Cade Harm broke free around the left end and went 32 yards with 50 seconds left on the clock. Harm finished the night with a team-high 70 yards.

Fedorchak had 69 yards, Paul Vetter had 55 yards and Isaac Vandal 43.

The Saints had 17 rushing first downs.

St. Mary’s (7-0) concludes the regular season on Wednesday against winless Stanley before opening the playoffs on Oct. 31.

Smrekar said his seniors have kept the Saints focused on the end game despite a season full of one-sided wins.

“We have good senior leadership and commitment. They have big goals,” Smrekar said. “It’s hard to keep them focused but to steal from (Alabama coach) Nick Saban, practice or game the scoreboard shouldn’t matter how hard you practice or play."

St. Mary's Sam Fedorchak runs for a touchdown in the fourth quarter of Thursday night's game at Smrekar Field.