Become a Member
Read Today's E-edition
Share This
St. Mary's surges in second half to knock off 11AA No. 3 Shanley
0 Comments
Share this
1 of 2 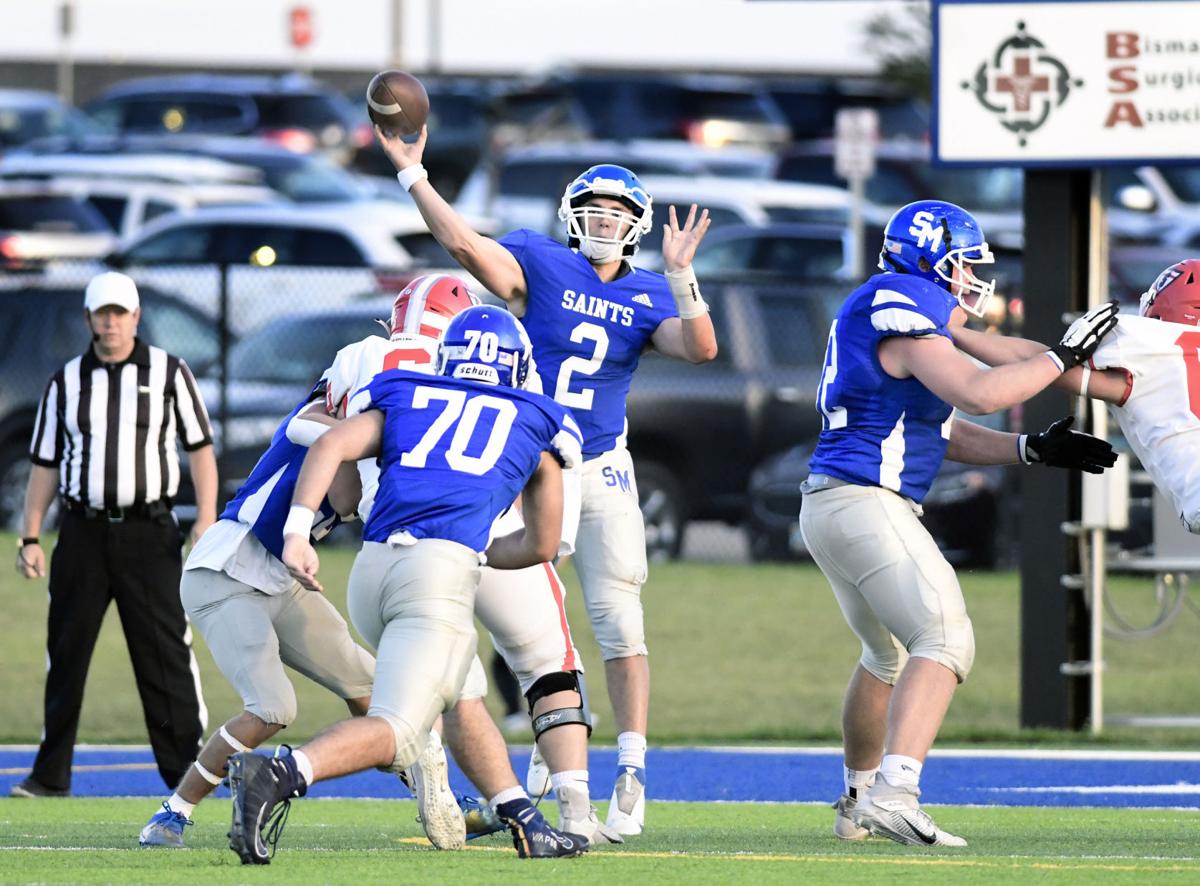 St. Mary's quarterback Nick Schumacher (2) is protected by the offensive line as he throws a pass against Fargo Shanley in the first half of Friday night's game at Smrekar Field. 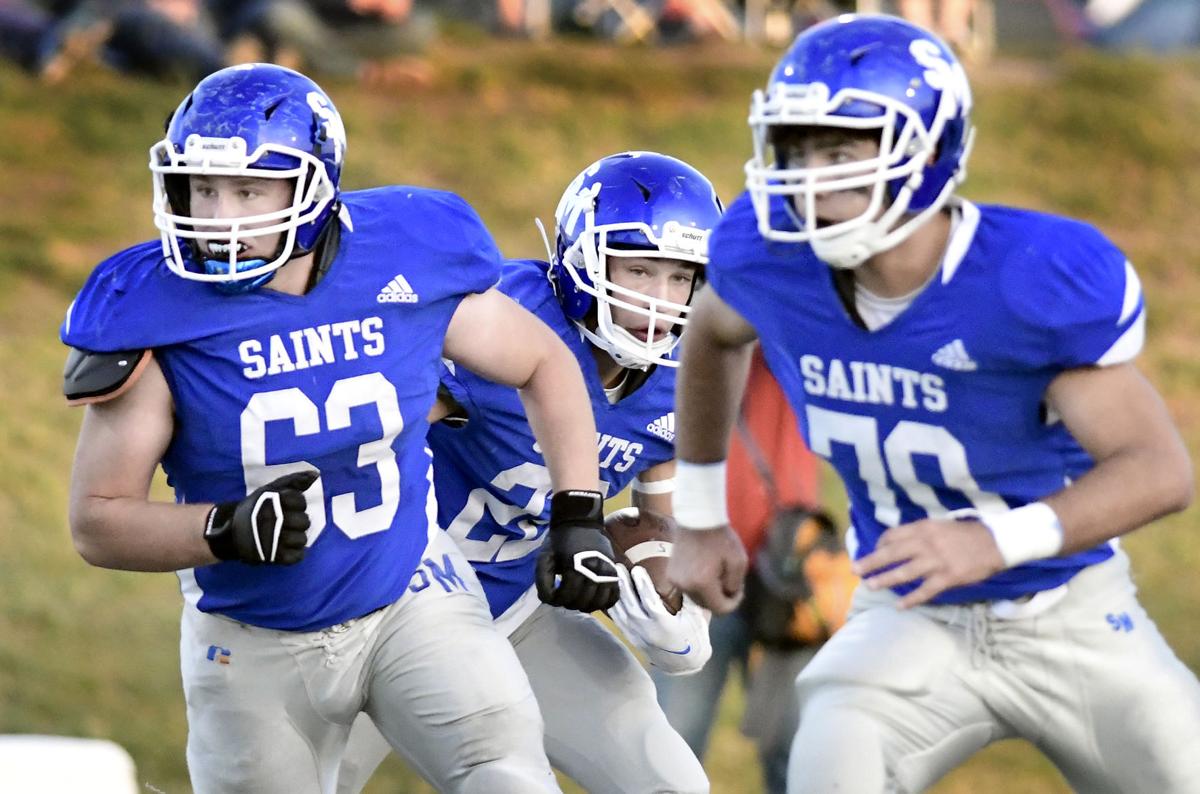 St. Mary's running back Isaac Felchle, middle, uses the blocking of offensive linemen Nick Windsor (63) and Will Marks (70) before turning up field against Fargo Shanley in the first quarter on Friday night at Smrekar Field.

It was all St. Mary’s after halftime, as it avoided back-to-back losses for the first time in four years while handing Shanley its second consecutive loss.

“We struggled in the first half. We just made adjustments in the second half,” Schumacher said. “We stepped up on offense. It had been a struggle in stretches. We just took their mistakes and turned them into opportunities.”

Schumacher completed 10 of 28 passes for 225 yards. He was most effective after the Saints finally established a running game in the second half.

“The difference was we came out and were able to run the ball right away in the third quarter,” St. Mary’s coach Dan Smrekar said. “I felt we had to come out and run the ball and take some time off the clock and keep the ball out of their hands.”

They didn’t do that in the first half and Shanley quarterback Michael Rostberg and receiver John Gores lit the Saints up. Rostberg, who passed for 289 yards, had 228 yards at the half. Of those, 153 yards and two touchdowns went to Gores.

But St. Mary’s defensive back Thomas Kraljic had two more catches than Gores in the second half. He picked off Rostberg late in the third quarter and again late in the fourth.

“I was just doing what the coaches told me to do, staying back in my position,” Kraljic said. “I didn’t try to chase anyone, just do my job and trust my teammates to do theirs.”

“We changed a little bit how we were covering in the second half. We let our safeties read the quarterback’s eyes a little bit more,” Smrekar said. “We got some pressure on them and got some picks.”

Gores’s big night began with a 53-yard punt return for a touchdown with 5:29 left in the first quarter. Cole Jaeger’s PAT made it 7-0.

The Saints responded but it had a lot of help from the Deacons to tie the game 7-7. The 60-yard march included a pass interference call and a roughing the kicker call on Schumacher’s successful 37-yard field goal. Given a choice, the Saints took the points off the board. A defensive holding penalty set the Saints up on the 3-yard line and Landon Gerving caught a TD pass from Schumacher on first down. Schumacher’s kick made it 7-7 with 11:46 left in the half.

The tie lasted 10 plays and a little over two minutes before Rostberg hit Gores with an 8-yard scoring pass and a 14-7 lead with 9:27 to play.

After an exchange of possessions that included the Deacons’ first punt of the game, Shanley took over with 2:36 to play and the ball on its own 27. Rostberg completed all five passes on a drive that ended with a 24-yard TD pass to Gores with 22 seconds left in the half. Rostberg rolled right and found Gores alone on the left side for an easy score and a 21-7 halftime lead.

At the break, the two teams had amassed 20 first downs, but only one on the ground and that was by St. Mary’s Isaac Vandal on the last play of the half. Rostberg had 228 passing yards at half.

Just when it looked like Shanley had established control, they lost it.

St. Mary’s running game finally appeared right away in the third quarter. Isaac Felchle – who ran for 88 of his game-high 113 yards in the second half – led a five-play 62-yard drive, all on the ground. He scored on a 13-yard run to pull the Saints within a touchdown.

Then the Deacons fumbled the kickoff and a pass interference call and a couple Felchle runs set the Saints up at the 24-yard line. From there, Schumacher found Nate Fedorchak for the first of his two TD catches and a tie game with 7:38 left in the third quarter.

The Deacons’ next possession went as far as the Saints' 32 before a holding penalty and unsportsmanlike conduct flag moved them out of scoring range and forced a punt. St. Mary’s then marched 75 yards to go ahead 28-21 on Gerving’s 65-yard touchdown reception with 2:53 left.

Shanley never again found the offensive flow it had early in the game and saw a four-game winning streak against St. Mary’s come to an end.

Shanley had not lost two straight games to Class AA (now 11A) teams since September of 2011. The Saints haven’t lost back-to-back games to anybody since early October of 2017 when Shanley and Watford City nicked them one after another. The Saints responded to those setbacks with four straight wins, including a 31-12 triumph over Shanley in the state championship game.

“They’ve got a really good team. Moving around so much, it’s been hard to keep the rivalry, but Shanley has been one,” Smrekar said.

On Tuesday night, Tricia Sorensen had a luxury she had been without since Aug. 28.

Bismarck High and Century had the rare opportunity to go directly head-to-head in girls swimming, with the Patriots coming out on top 130-50.

Facing the Century Patriots in volleyball on any night is a daunting task.

St. Mary's quarterback Nick Schumacher (2) is protected by the offensive line as he throws a pass against Fargo Shanley in the first half of Friday night's game at Smrekar Field.

St. Mary's running back Isaac Felchle, middle, uses the blocking of offensive linemen Nick Windsor (63) and Will Marks (70) before turning up field against Fargo Shanley in the first quarter on Friday night at Smrekar Field.