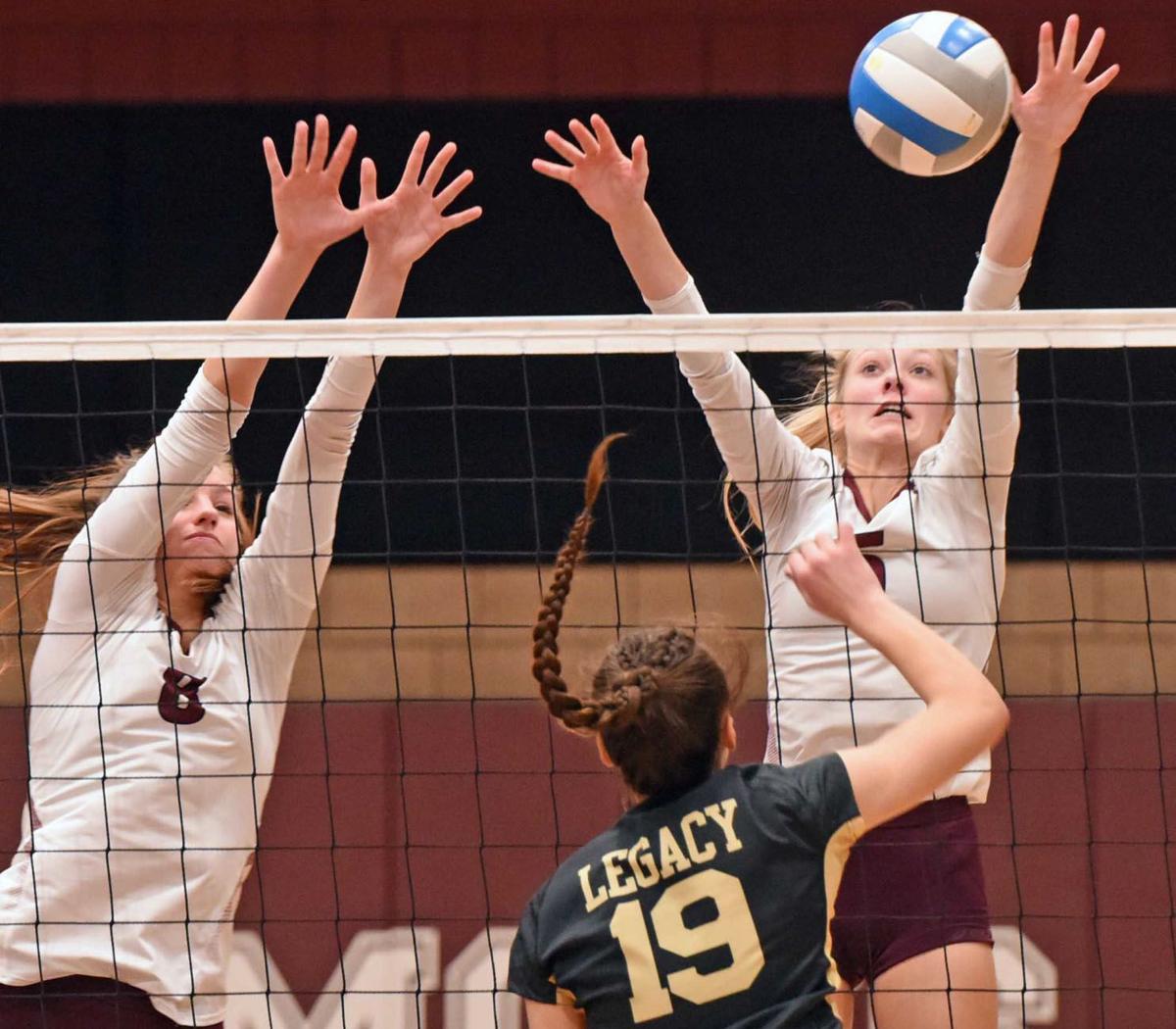 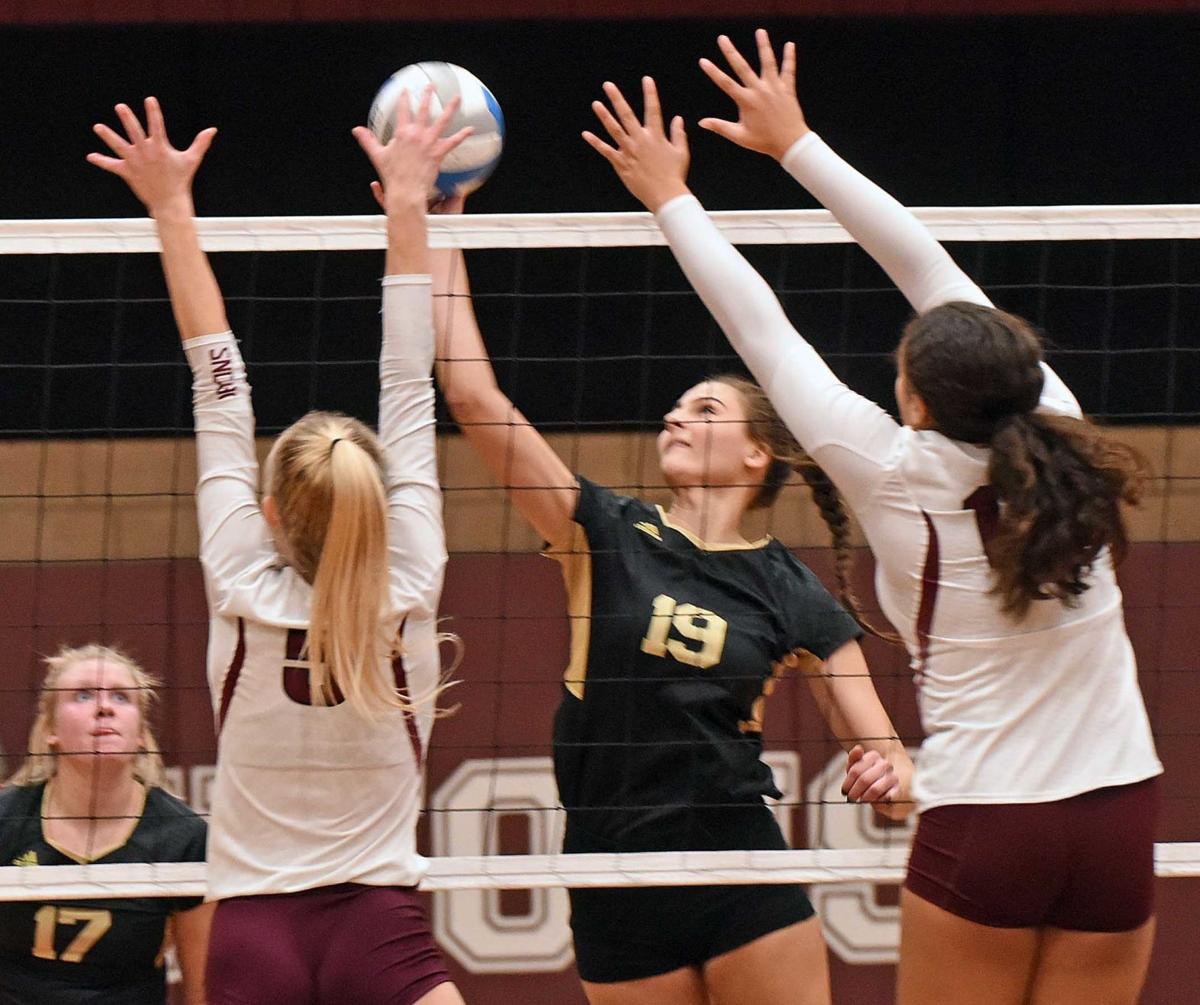 Except for Tuesday night. The pendulum swung only once and then stayed with Legacy in a West Region quarterfinal match at Bismarck's Karlgaard gym.

BHS pounded the visitors 25-14 in the first game, only to watch the Sabers turn around and take command of the show. Legacy recovered to take the second game 25-15 and then rolled to a 3-1 victory. The Sabers won the final two sets 25-21 and 25-16.

"We played nervous," said Maggie Sorensen, Legacy's 5-foot-8 senior hitter. "We took a deep breath (after the first set) ... and calmed down so we weren't so jumpy.

"It definitely took us the whole first set before we got things straightened out. We figured out at the end of the first set that instead of swinging as hard as we can, we had to start placing it."

"Our defense followed our offense a little bit. ... Once we put some balls on the floor and got the lead we got more comfortable," Sorensen added.

Once Legacy asserted itself, frustration began to show on the Bismarck end of the court. The Sabers scored seven times in the fourth game on BHS hitting errors and twice more on service errors.

For the match, Bismarck had eight aces and seven service errors. Conversely, Legacy's count was 11 aces and one bad serve.

With the victory, Legacy moved into a quarterfinal match with Century on Thursday at CHS.

Bismarck plays host to Watford City, a 3-0  loser to Century, on Thursday in a loser-out match.

The first game was a BHS feeding frenzy as Caitlyn Allery blasted five kills and McKenzie Moser and Kenadi Renner added four each. A 9-0 run put the Demons up 21-11. An ace by Renner closed out the game 25-14.

Following four ties in the early going, Legacy took control of the second set with an 11-3 surge that put BHS in a 16-9 hole. The Sabers scored five of the final six points, three of them by Breena Sand. Sand's kill gave Legacy a 25-15 edge.

The third game, featuring four ties, was the most competitive game of the night. Legacy made its move trailing 12-10. A 6-0 burst put the Sabers ahead 16-12.

BHS came back to knot the game at 18 on a block by Brooke Curtis and Emily Stonecipher, but Legacy responded with a 5-1 run for a 23-19 lead. A kill by setter Camaryn Beasley put the finishing touches on a 25-21 Legacy verdict.

Game four began like another nip-and-tuck affair with eight ties, the last at 10-10. At that point, Legacy went on a 9-0 run for a 19-10 lead, and the match was essentially over. The Demons contributed six hitting errors to the decisive run. A BHS net serve sealed the deal on a 25-16 game.

Sand, a 5-foot-9 hitter, led the Legacy offense with 15 kills. Sorensen finished with 10. Senior Kristin Ness led the defense with 21 of Legacy's 70 digs.

Legacy coach Jennifer Astle said part of her team's slow start was the result of frustration.

"We played frustrated the first set," she said. "Frustration will eat away and tear players away from their teammates."

Another factor was adjusting to a much-needed full lineup.

"Tonight was the first time we've all, players and coaches, been together for a long while. ... We've really taken our lumps and bumps with COVID and injuries, so being here together was a big deal," she noted.

BHS coach Brianna Kline said her team's reversal of form had little to do with technique or strategy.

"We stopped playing with the confidence we need," she said. We were really struggling to find our groove."

Kline said the emphasis for Thursday's match is simple.

"Mentally, we'll have to overcome this ... and execute better," she observed.

Sabers stellar down the stretch in narrow win over Century

No. 1 Century holds off Legacy to remain unbeaten

A 13-point lead had dwindled to a one-possession advantage with three minutes to go.

An easy hat trick in hockey? There is no such thing. However, it would be safe to say one-third of Remington Richardson's hat trick against H…

Tschosik's clutch 3-pointer lifts No. 5 Bismarck over No. 4 Jamestown

Unable to find the range from deep all day, Max Tschosik made one when it mattered most.

It didn’t come easily, but the Legacy Sabers picked up a big road win.

To the high school wrestling aficionado, the roll call of Bismarck Rotary  tournament champions includes the names of some great high school w…

Devils Lake goaltender Molly Black's save percentage ranks with the best in the state. And on Tuesday it actually improved to .941.