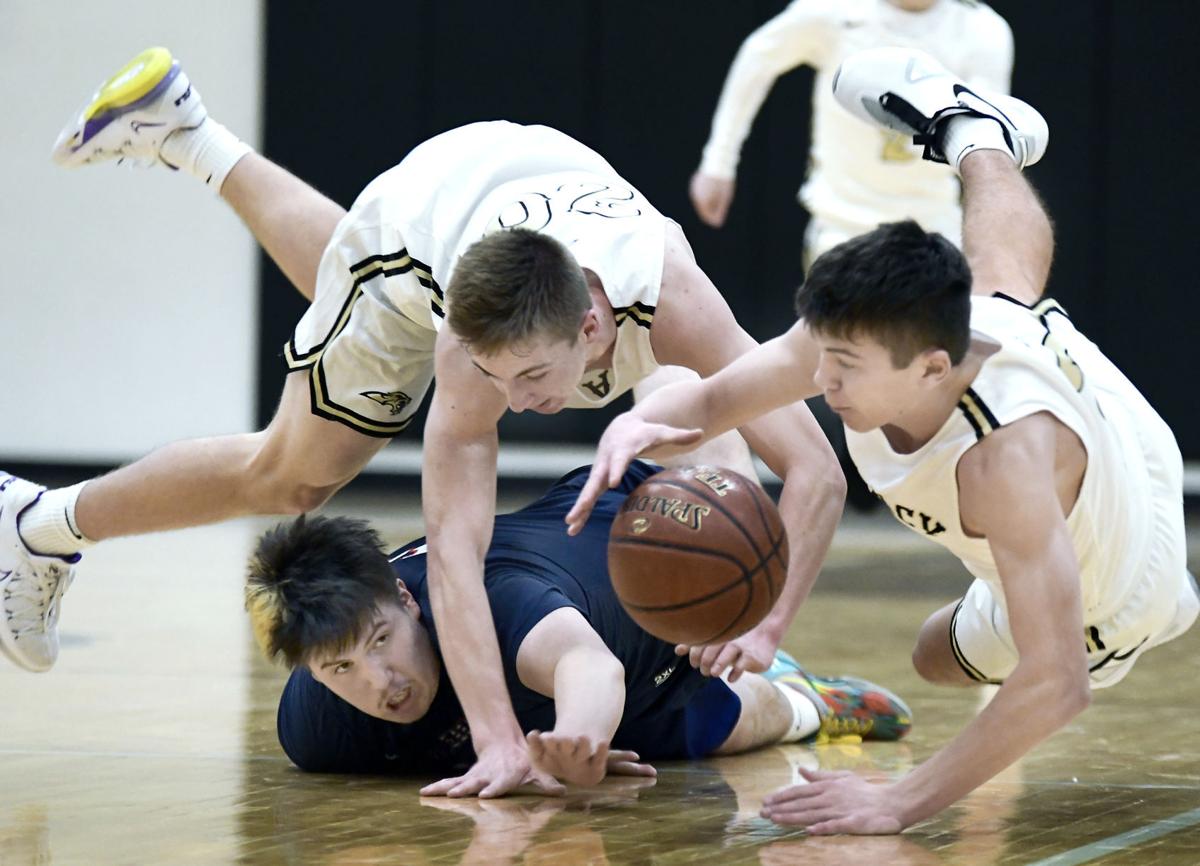 Century's Jordan LeBeau, bottom, battles for the loose ball with Legacy's Nick Kupfer, middle, and Keagen Woodbury in the first half of Thursday night's game at Haussler Gym. 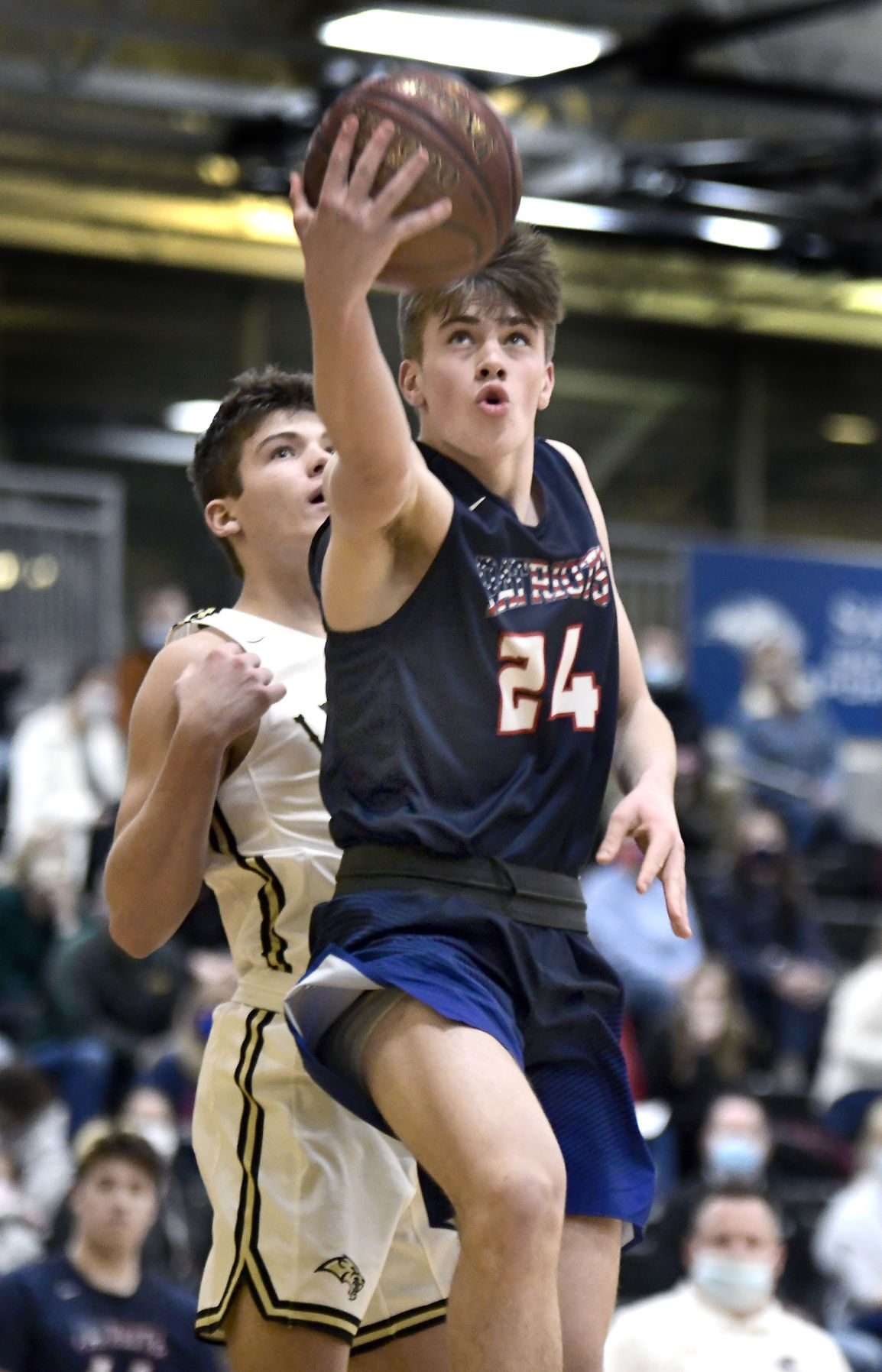 Century guard Anthony Doppler (24) drives past Keagen Woodbury for the score in the second half of Thursday night's game at Haussler Gym.

Down 59-55 to Century with 1:55 left, the Sabers scored eight of the last nine points of the game to rally for a much-needed 63-60 West Region victory at Haussler Gymnasium.

Ben Patton and Nick Kupfer buried clutch 3-pointers on back-to-back possessions to turn a four-point deficit into a 61-59 lead. After one free throw by Ryan Erikson, Zander Albers scored off a feed from Patton for a 3-point edge (63-60) with 11 seconds left.

Ian Ely's 3-point attempt to tie at the horn was just off, sending the large home crowd into a frenzy.

"We trust each other and that's what you have to do late in the game," said Kupfer, who topped the Sabers with 19 points. "To be able to pull it out at the end like that, executing on both ends of the floor, that was huge for us."

The Sabers flipped the script from their previous game, 11 days ago at home, when they faded late in a 72-63 loss to Mandan. That setback made Thursday's frantic finish all the more important.

"That's what fell apart against Mandan. We just kind of panicked and tried to do too much. We just reminded them that this is a similar situation. It's going to come down to execution. We have to be able to run our stuff," Legacy coach Jason Horner said. "Give the boys credit. They executed against a really good team when we had to."

Keagen Woodbury and Ben Patton assisted on the Sabers' final two baskets, with an assist to the World Wide Web.

"Those last couple of possessions, we just put those plays in on Monday. Thank you YouTube," Horner said. "You just start searching ... what can you find that fits your team. I'm not a big set-play guy because of the amount of time you spend on it and whether or not they execute is 50-50 sometimes, but there are times when you need a basket and it's nice to have a play, or two, to go to ... tonight, it worked."

It was an exciting end to an entertaining game. The lead switched hands eight times. Century's biggest lead was five, Legacy's nine. Having fans in the stands made it feel like a game in March.

"It makes a big difference. It just feels more of what we're used to," Kupfer said of having fans in the stands. "We understand why it was like that before, having no fans, but it's just great to have people cheering. It really adds to the atmosphere."

Legacy surged to end the first half.

Trailing 25-21 after a putback by Erikson, the Sabers scored 11 straight points to seize momentum.

Brett Martin, Logan Wetzel and Kupfer buried 3-pointers on three straight possessions. Kupfer added two more at the stripe and the Sabers turned a four-point deficit (25-21) into a seven-point lead (32-25) in less than 90 seconds 2 minutes before halftime.

It was the first time Legacy has beaten Century at home.

"It was a fun basketball game. I thought both teams played well. For us, we needed this one. You can't afford to lose at home," Horner said. "Our kids made a few more plays at the end and that was the difference."

Legacy led 37-29 late in the first half, but the Patriots scored the first eight of the second half, six by Conner Doppler, and it was back and forth from there.

Legacy had just 10 turnovers, one more than Century. Only 24 fouls were called, 12 on each team.

Erikson, Century's 6-foot-9 sophomore, turned in another stellar performance with a game-high 26 points. Doppler, also a sophomore, added 15, 13 coming in the second half.

"Century's a really good team. They're big and we knew it'd be a challenge against them inside," Kupfer said. "I felt like we held our own and that was a big key for us."

The Sabers, who improved to 6-3 with the win, play at No. 3 Bismarck High on Tuesday.

"There are so many good teams, you have to win at home," Kupfer said. "We really needed this one tonight."

Century (4-3) is back in action on Tuesday with a long road trip to Belcourt to face Turtle Mountain.

Wilton-Wing held Kenmare to 15 first-half points en route to a 47-40 win at the state Class B tournament in Minot on Thursday.

Teams play for their basketball lives in the sunshine bracket at the West Region basketball tournament.

Century heads into next week's state Class A tournament on a serious role.

Eaglestaff pours in 39 points as Demons top Dickinson in shootout

Williston's Ashton Collings knew his goal was big. The second it settled in the net early in the second period of Tuesday's playoff hockey ga…

Blizzard hope to build on comeback win over Mandan

The Bismarck Blizzard recovered from a slow start to the postseason.

Century's Jordan LeBeau, bottom, battles for the loose ball with Legacy's Nick Kupfer, middle, and Keagen Woodbury in the first half of Thursday night's game at Haussler Gym.

Century guard Anthony Doppler (24) drives past Keagen Woodbury for the score in the second half of Thursday night's game at Haussler Gym.