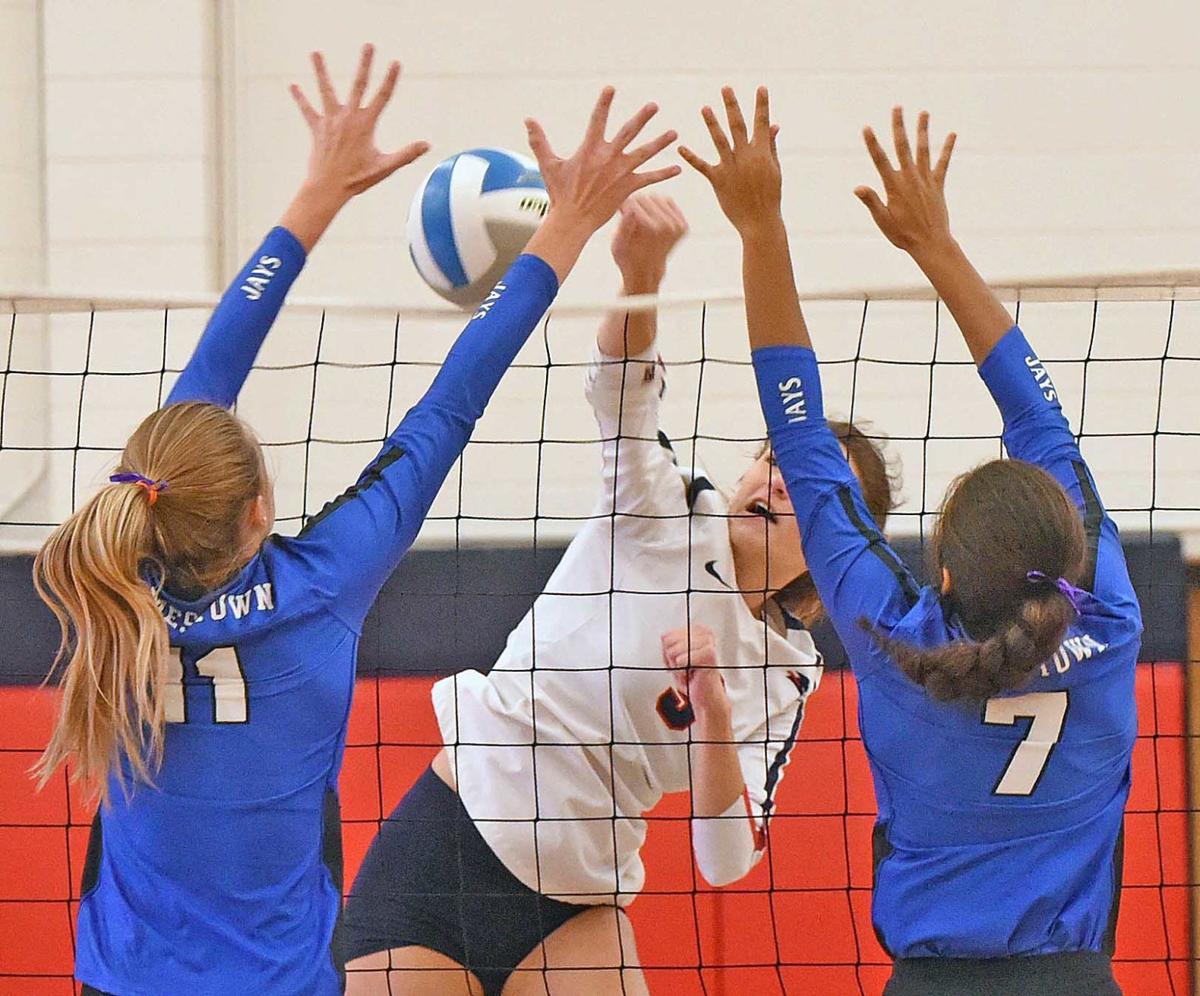 Century's Macy Fridgen. middle, gets a kill down between Jamestown's Grace Hegerle, left, and Hunter Peterson (7). 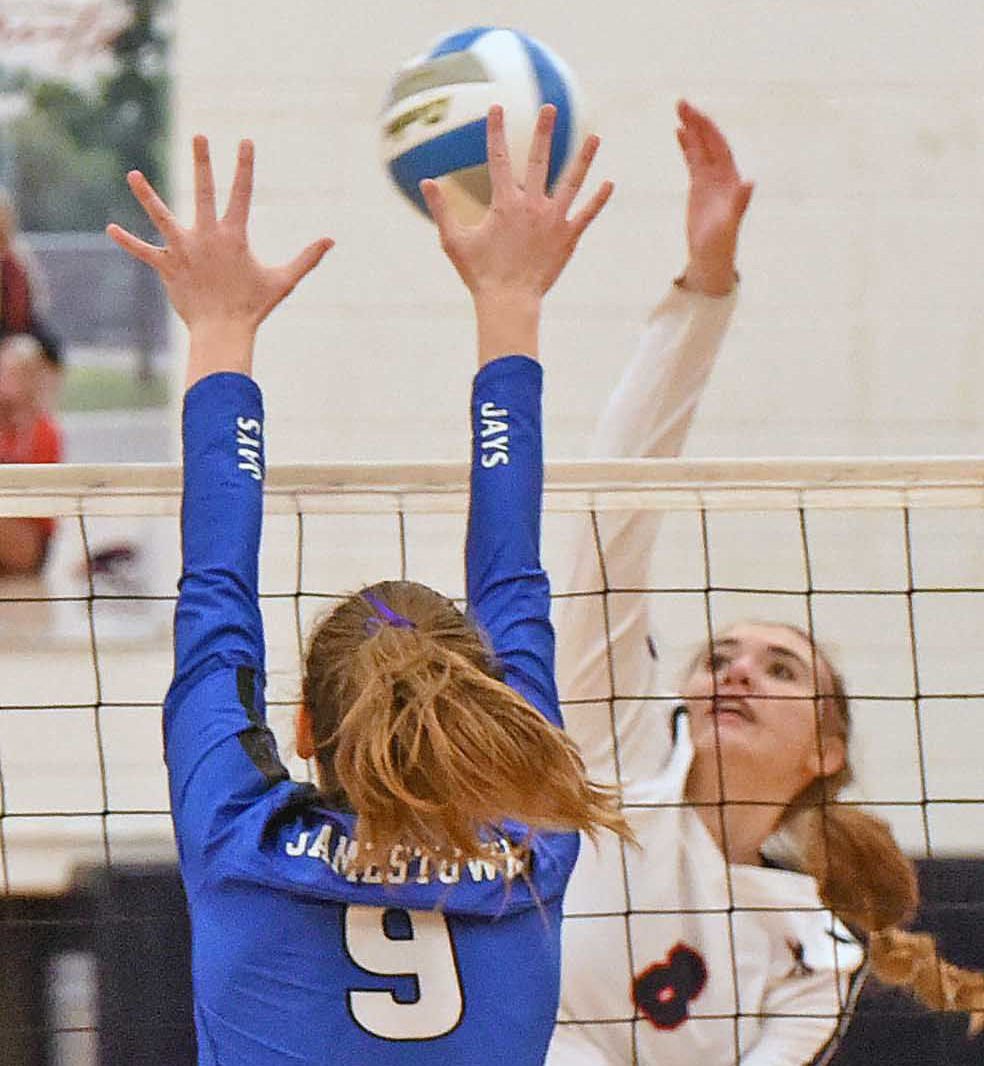 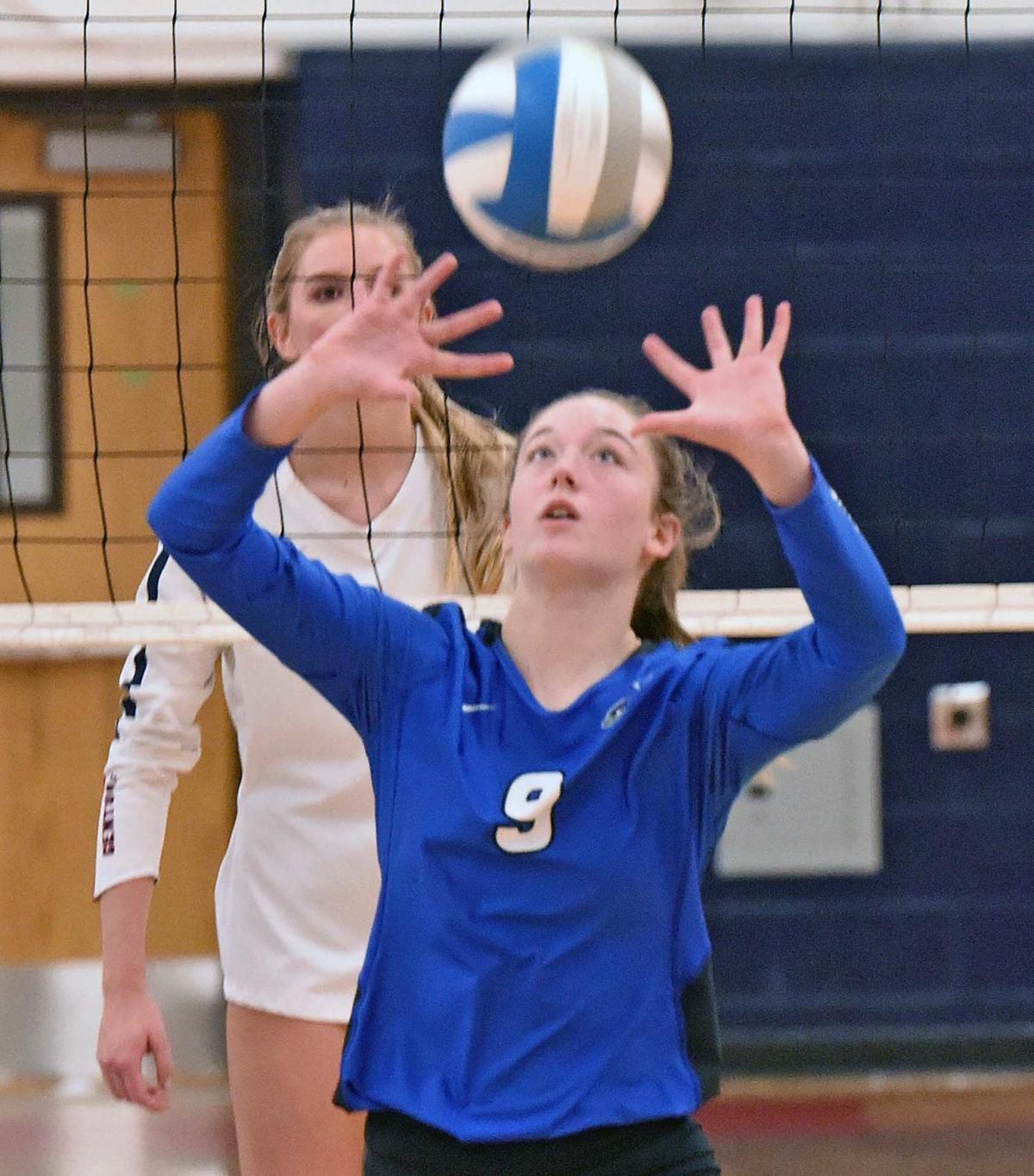 Century and Jamestown, 1-2 in the regional standings and 1-3 in the statewide media poll, squared off Thursday night at the CHS gym.

But instead of a nip-and-tuck, tooth-and-nail match, the teams exchanged one-sided games. Unbeaten Century came away from the strange encounter with a 3-1 win to improve to 16-0.

Jamestown dipped to 14-3, two of those losses to the top-ranked Patriots.

On the Century end of the gym, the Patriots were celebrating their best match of the season.

"Our coaches were saying ti was it was the best we've played as a team this year," 6-foot-2 junior hitter Macy Fridgen said.

"I think by far ... this is the best we've played all season," she noted. "We were able to use a variety of hitters, and an offense like that is hard to stop."

On the other end of the floor, Jamestown head coach Sara Hegerle was disappointed over an opportunity lost.

"I don't think there's anything we can blame it on," she said the Blue Jays' first setback in eight matches. "We just were not ready to play."

Century came out hitting on all cylinders. The Patriots opened leads of 11-4 and 18-8 en route to a 25-11 blowout. Century set the stage for what was to come as five different hitters had five or more kills in the opening set.

Game three was a complete turnabout. Jamestown's offense found its groove and the defense came alive and the Blue Jays gave the Patriots a thorough trouncing. An 11-3 run gave the Jays a 20-10 lead. Grace Hegerle, a 5-10 senior, ran the show with six kills and a block for the Blue Jays, who prevailed 25-13.

"Props to Jamestown. They started swinging and blocking and our girls didn't adjust to that very well," Zastoupil said. "(The Jays) were playing aggressively ... and I think we got a little complacent and got caught on our heels."

Coach Hegerle said the third game provided a peek at what the Blue Jays can be.

"I'm grateful we played well in the third set. It provided a glimpse of how we can play," she noted. "I hope we can play them again."

Century got things sorted out between games and took a permanent lead in the fourth set on a kill by Julia Fitterer that put the Patriots up 4-3. That began a 9-4 CHS surge that made it 12-7.

Jamestown could pull no closer than three points the rest of the way as Century closed out the match 25-17 behind five kills by 5-10 senior Julia Fitterer and four by 5-10 sophomore Logan Nissley.

Century's offensive production came from all over the place. Julia Fitterer rang up 14 markers, Fridgen added 11 and Nissley had 10. Hattie Fitterer and Megan Klein pounded out eight kills each.

Fridgen said that's the way things go when the Patriots are playing well.

"That's the way it works. It helps us all to get involved in the play," she said.

Through the first two games, Century's defensive front row rarely let the Blue Jay hitters swing away unchallenged. Fridgen said that was a point of emphasis going into the match.

"One of main goals was blocking. Our coaches were saying we had to get a touch on every ball we could," she observed.

"Our defense has been a priority all year. ... We work on defense every practice, and I think that showed tonight," she continued.

Zastoupil was in total agreement.

"Defensively we played so well. Jocelyn (Julson) played out of her mind in the back row and our blockers were so huge," she noted.

The Blue Jays, who were playing their third match of the week, were coming off a 3-0 Tuesday victory over Legacy.

"We played the best match we've played all year against Legacy. I think we thought we would coast on the coattails of that," coach Hegerle said.

Jamestown returns to action on Tuesday at Mandan. Century plays its third match of the week on Saturday at Legacy.

Century's Macy Fridgen. middle, gets a kill down between Jamestown's Grace Hegerle, left, and Hunter Peterson (7).