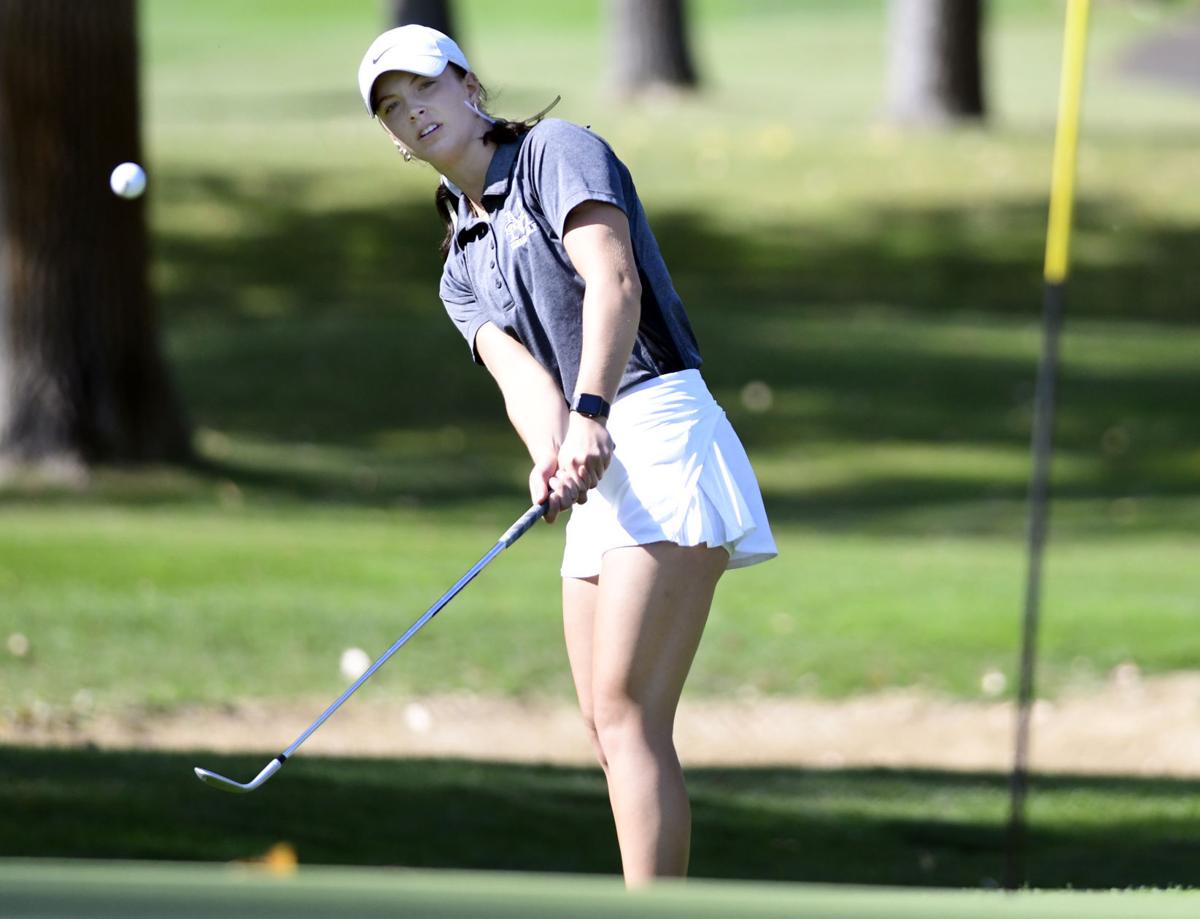 Mandan's Anna Huettl chips onto the ninth green at Riverwood Golf Course in Bismarck during the West Region golf meet on Monday. 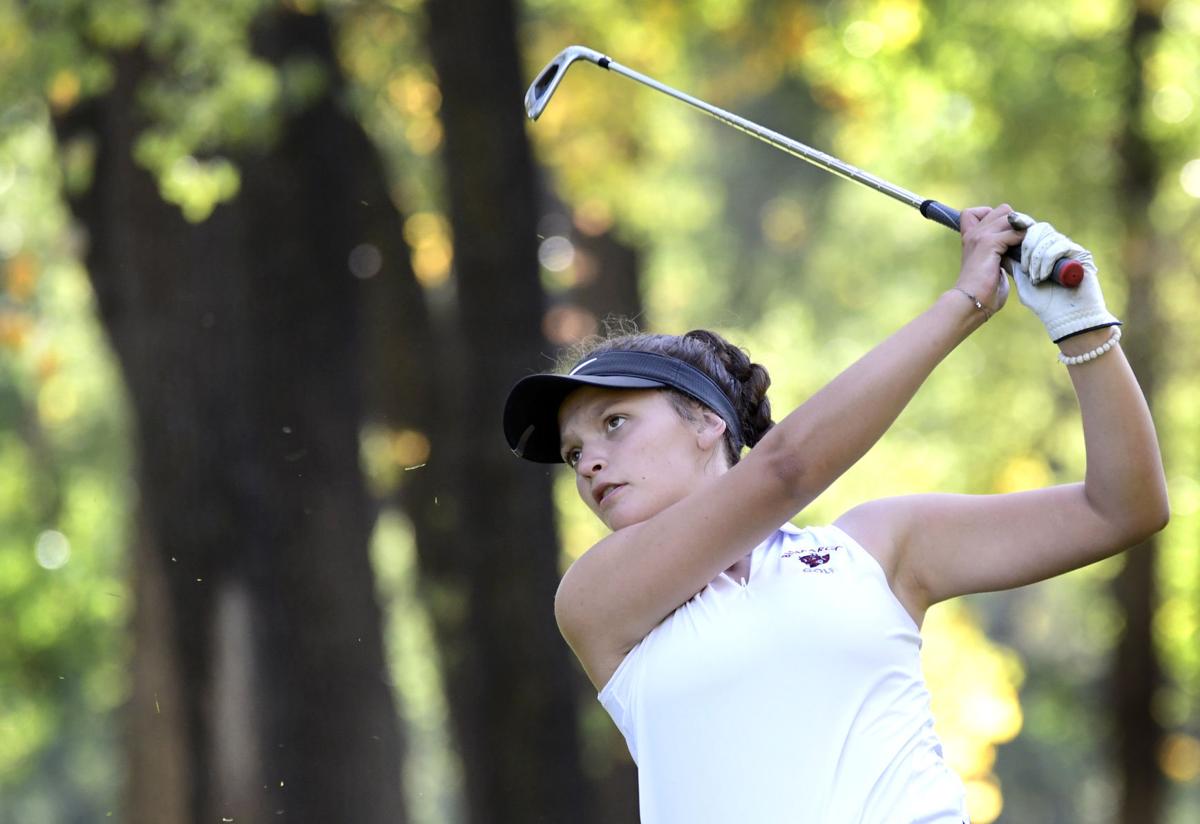 Bismarck's Grace Stroh watches her tee shot on the seventh hole at Riverwood Golf Course in Bismarck during the West Region golf meet on Monday. 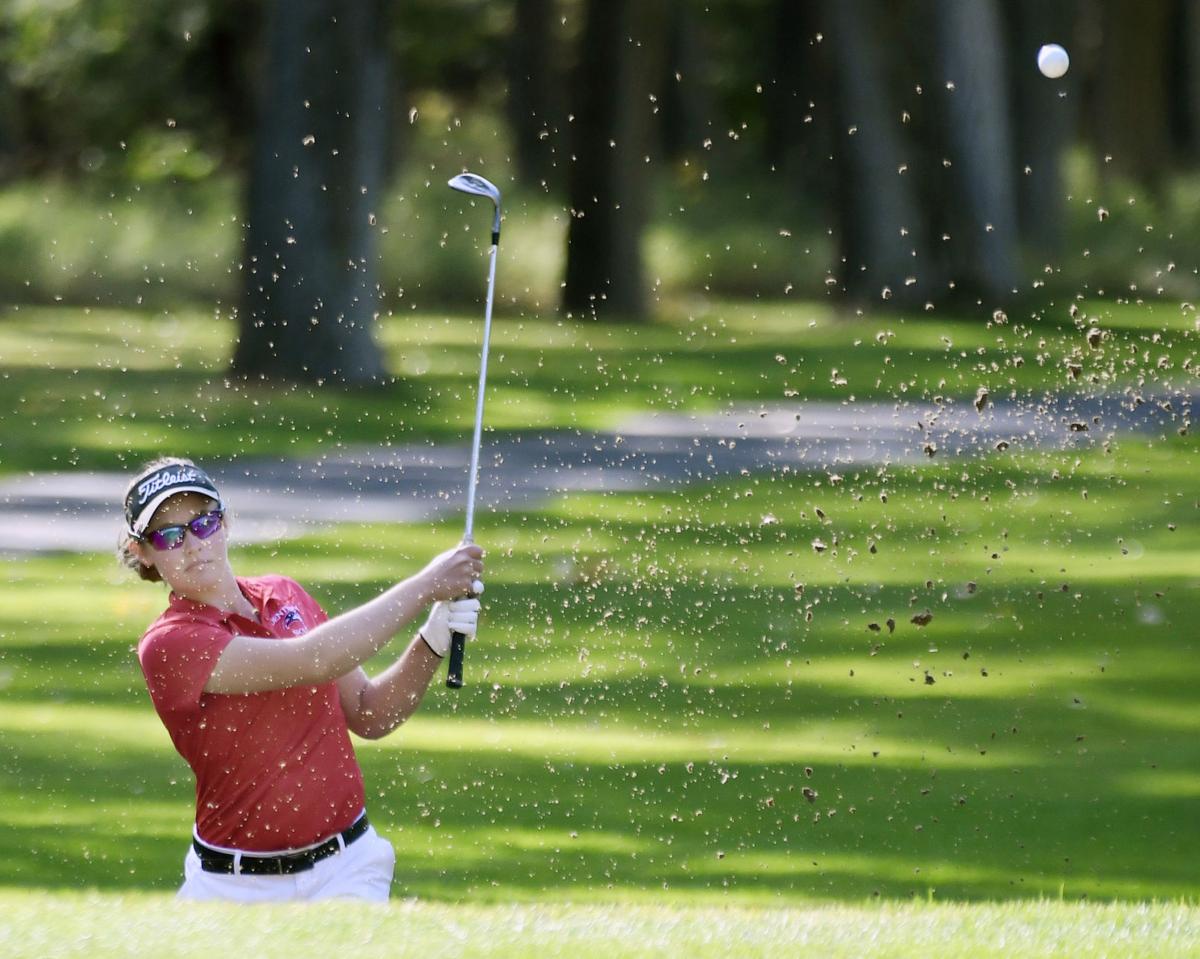 Century's Hannah Herbel chips out of the bunker in front of the seventh green at Riverwood Golf Course in Bismarck during the West Region golf meet on Monday.

The Mandan sophomore standout edged teammate Aysia Mettler by one stroke on Monday to win the West Region Golf Tournament at Riverwood in Bismarck.

Huettl's round of 76 was one shot better than Mettler, two ahead of Leah Herbel and three in front of Hannah Herbel of Century, which won its fourth straight West Region team title.

It was the second win of the season for the big-hitting Huettl, who put in long hours during the sizzling summer temperatures.

"Over the summer, I golfed a lot. Probably almost every single day. I put in a lot of work," she said. "I think today was a testament to that."

Huettl's win was by no means a surprise. She owns the third-best scoring average (77.14) in the region behind only Leah Herbel (75.29) and Hannah Herbel (77.0). Hannah is the three-time defending Class A state champion. All three players will likely figure prominently at the Class A state golf meet at Edgewood in Fargo Oct. 4-5.

Huettl enjoys playing against the super-accomplished Herbel twins and the other top players in the state.

"I think the competition really helps me and it pushes all of us to perform our best at every tournament," she said. "It's fun to play with those girls because they are great players."

On another warm afternoon, Huettl avoided any major problems on Monday. Her card had nothing bigger than a 5 to go with eight 4s and a trio of 3s.

"I thought I hit it pretty well off the tee today," she said. "I didn't putt that great, but I was hitting the ball pretty solid and that helped me out a lot.

"I wasn't necessarily worrying about my score. I thought if I stayed consistent and didn't have any bad holes I'd have a chance and it worked out.

Huettl's distance off the tee was beneficial at Riverwood, which is pretty long at nearly 7,000 yards, but also demands players to keep the ball in play.

"I think my strength is probably hitting, and I think I hit it pretty far so I try to use that to my advantage," she said.

Huettl and Mettler led the Braves to a strong second-place finish behind Century. Seven strokes separated the two teams, 323-330.

"It was a great day for our team," Huettl said. "Aysia played amazing. We all went out there to do our best and it went really well."

Huettl and the Braves are hoping for more of the same next week in Fargo.

"I think we're just gonna go out as a team and try to play our game," she said. "If we do that, we'll be happy with whatever happens."

"I thought the girls battled really well and did a good job executing the game plan of what we worked on and talked about during our practice round on Sunday," Century head coach Jeff Rasmussen said. "The big thing was keeping it in play. Just because a hole is a par 4 or a par 5 doesn't mean we have to hit driver and potentially bring a big number in play.

"It's essentially target golf. Just being smart. Not trying to do too much and making sure we're focused on one shot at a time and not letting a bad shot or a bad hole turn into more than that."

Monday's win was the fruit of their labor.

"That's what we talked about with the girls is that this just wasn't about today," Rasmussen said. "They were really committed to some offseason training programs in January, February and March, and they played a lot of tournaments in May, June and July.

"They've worked hard to get here. They earned it."

Grace Stroh of Bismarck High placed sixth in the meet, meaning Bismarck and Mandan golfers earned the top six places in the tournament. Behind's Stroh's strong round, the Demons finished third (360), one shot ahead of Dickinson.

Lola Homiston of Dickinson and Carrie Carmichael from Williston tied for seventh. Braun was ninth and Olivia Sorlie of Jamestown 10th.

Girls hockey games between Bismarck and Mandan have been must-see events for the last several seasons.

The Bismarck Rotary wrestling tournament is a mile marker in the high school wrestling season. In front of it, the first half of the season. B…

Twenty-nine wrestling teams descended on Bismarck Friday for the opening of the Bismarck Rotary tournament at the Bismarck Civic Center.

Legacy got 20 points from Kiefer Glenn, 17 from Zander Albers and played excellent defense to outlast a tenacious and experienced St. Mary's s…

Getting a warm-up in before a tournament is important. Thursday evening, both Bismarck and Legacy got a warm-up and then some, as the two loca…

Mandan's Anna Huettl chips onto the ninth green at Riverwood Golf Course in Bismarck during the West Region golf meet on Monday.

Bismarck's Grace Stroh watches her tee shot on the seventh hole at Riverwood Golf Course in Bismarck during the West Region golf meet on Monday.

Century's Hannah Herbel chips out of the bunker in front of the seventh green at Riverwood Golf Course in Bismarck during the West Region golf meet on Monday.