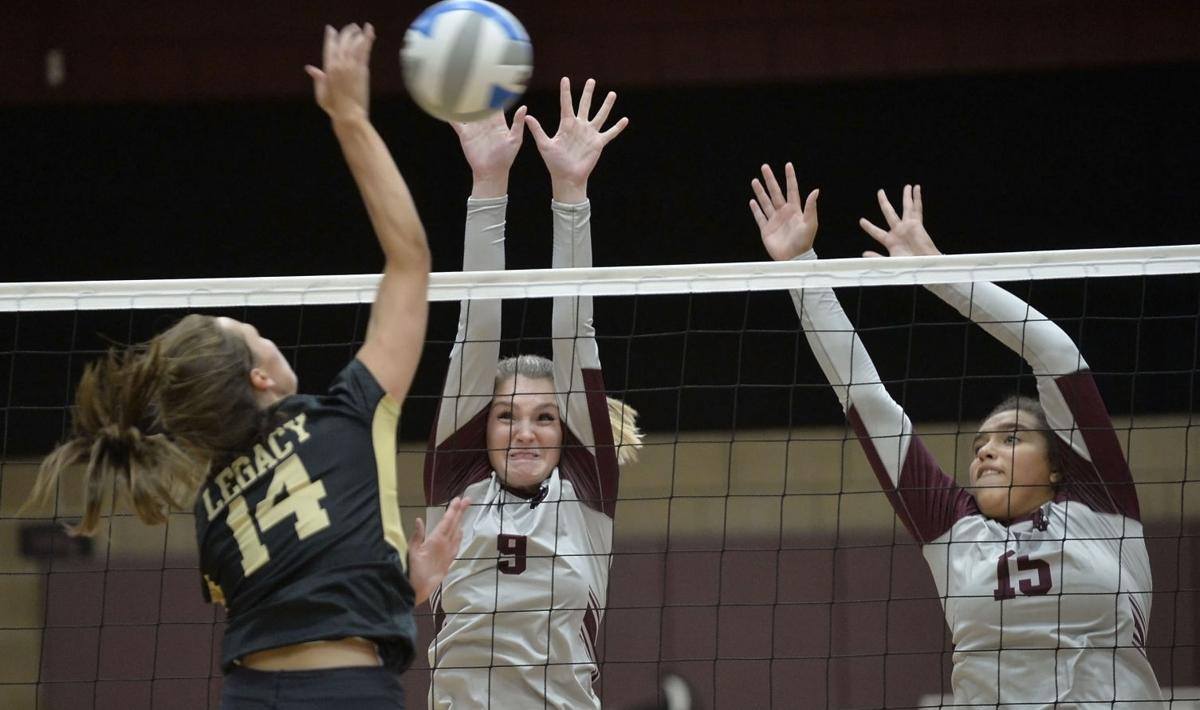 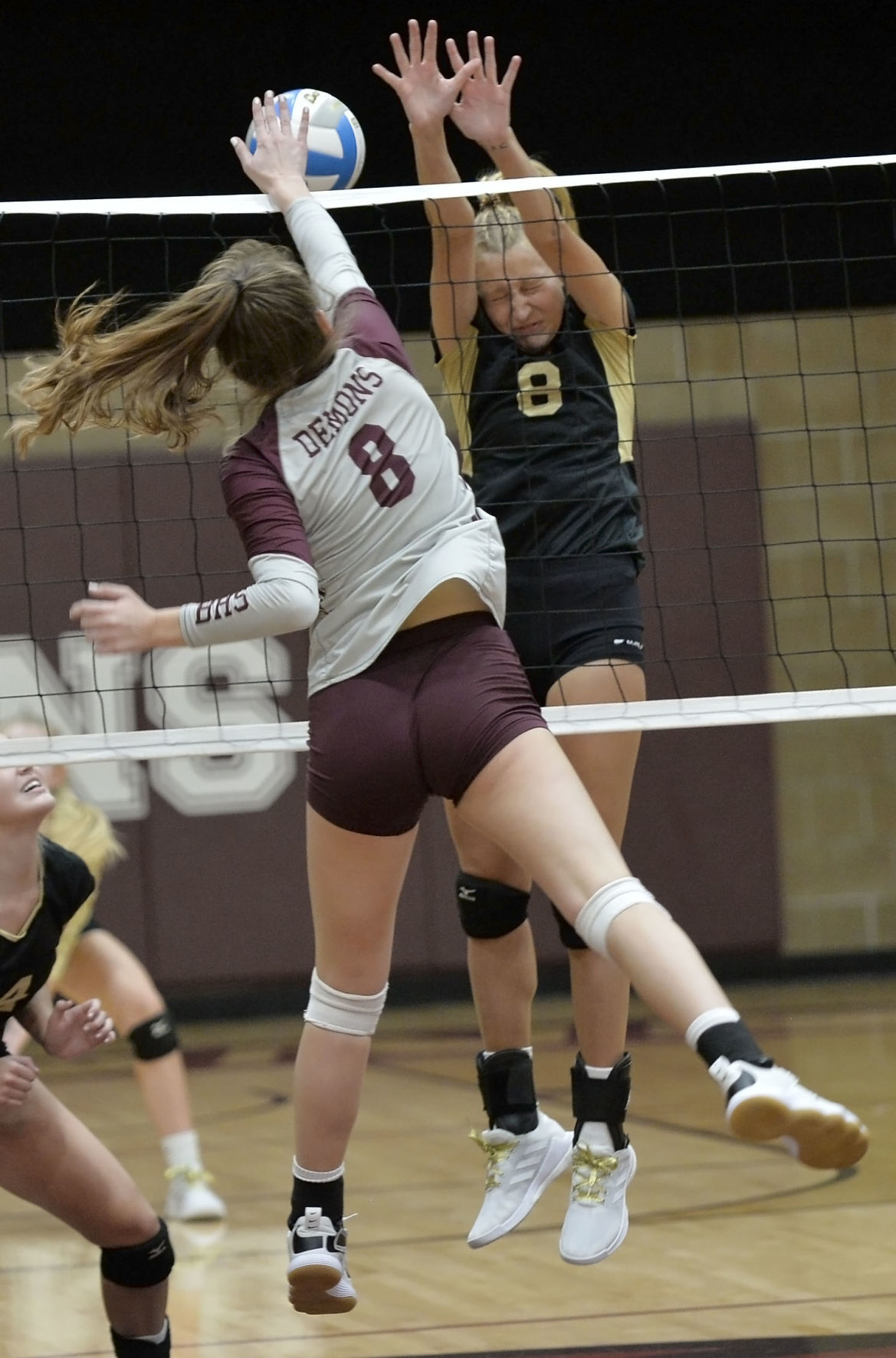 Legacy's Sierra Knoll goes up for a block against Bismarck's Caitlyn Allery during Tuesday night's match. 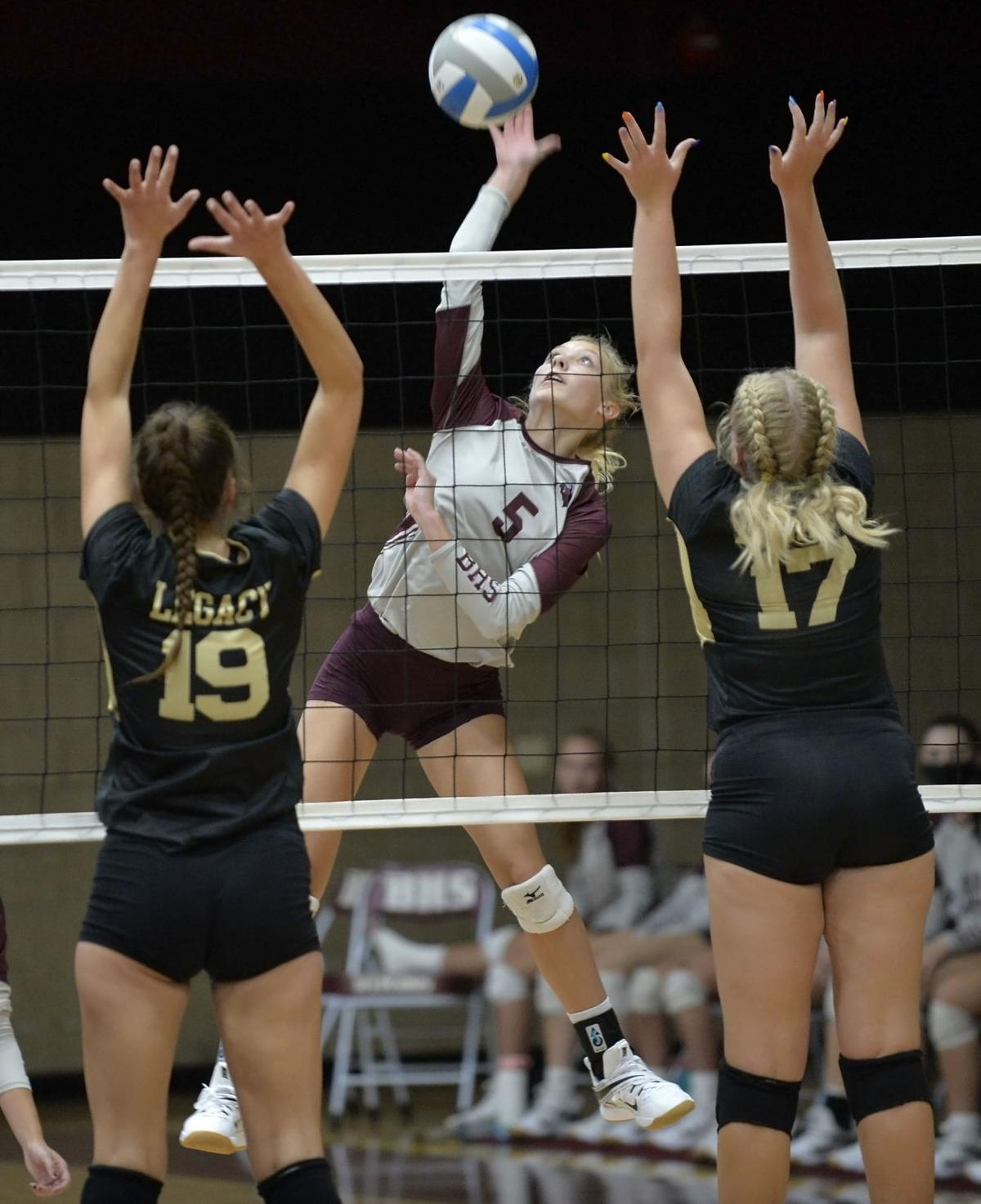 Legacy's Isabella Ternes (19) and Camaryn Beasley try to defend at the net against Bismarck's McKenzie Moser.

There were plenty of good times and bad times on both benches what turned out to be a hard-fought battle between a ranked team (Legacy is No. 5 in the statewide media poll) and Bismarck (now 0-3.)

The contest was every bit as close as the score indicates. Neither team was able to launch on a long run the entire night. This victory was built in bits and pieces -- five- or six-run surges at best.

Legacy had to worm its way out of an extremely tight spot in the fourth game to make the decisive fifth game possible.

Bismarck, ahead 24-22, was serving for match point in the fourth set, but never got to the magical 25.

Three long out-of-bounds hits by the Demons enabled the Sabers to take a 25-24 lead and a kill by 5-foot-9 junior Breena Sand sent the match to game five.

The fifth game, produced six ties, the last at 12, as Legacy won the set and match with a four-point run.

Legacy, now 4-1, put the match away on on a tap by 5-7 senior Camaryn Beasley, a kill by Sand, an ace by 5-8 senior Maggie Sorensen and a kill by Sorenson.

Deadlocks were the recurring theme of the night. The first game was knotted three times, the last time at 9-9. Game 2 featured 18 standoffs, the last at 22, there were no ties in Bismarck's 25-18 third-game win. The fourth game produced 10 deadlocks.

Sand said it was important to come away with a victory after so much time and effort was invested in the match.

"The longer we work so hard, the more we want it. We put in so much effort," said Sand, who logged a team-high 16 kills. "It's more special for us when we have to work for everything."

Sand began the match with a lot of tipping and tapping but went with more power as the evening wore on.

"They played their defense pretty deep on us at first, so the tip was open. They adjusted and we started to play the deep corners more," she said.

Astle said the match never developed much of a personality.

"It was all over the place, a little bit of everything. ... Both teams have a lot of talent and ability," she said.

Astle noted the aggressiveness the Sabers showed in the fifth game was what she'd been trying to bring out the whole night.

"At the end of the fifth game our kids came out with a play-to-win mentality instead of playing to not lose -- an I'm swinging to win mentality," she noted.

BHS coach Brianna Kline said Tuesday's match was a tough loss with the Demons' first victory so close. But there were some positives.

"The girls played way better than they have so far," she observed.

She said the Demons gained ground as a team, the setback notwithstanding.

"This puts us in a better mental place going forward," she said.

Both teams return to action on Thursday. Legacy visits St. Mary's and Bismarck travels to Dickinson.

Legacy seniors go out with key win over Minot

Legacy's seniors got just one game on its true home field this season.

During this unusual 2020 season, Century's results in the swimming pool remain up to the Patriots' lofty standards.

Century's array of hitters is either a thing of beauty to watch or a defensive nightmare.

Volleyball coaches call their sport a game of momentum for good reason. The good times come and the good times go, and seldom do they hang aro…

The West Region cross country meet had a little bit of everything for the Century Patriots.

Mandan gets back on track in sweep of St. Mary's

Mandan got back on track Tuesday night.

Legacy's Sierra Knoll goes up for a block against Bismarck's Caitlyn Allery during Tuesday night's match.

Legacy's Isabella Ternes (19) and Camaryn Beasley try to defend at the net against Bismarck's McKenzie Moser.