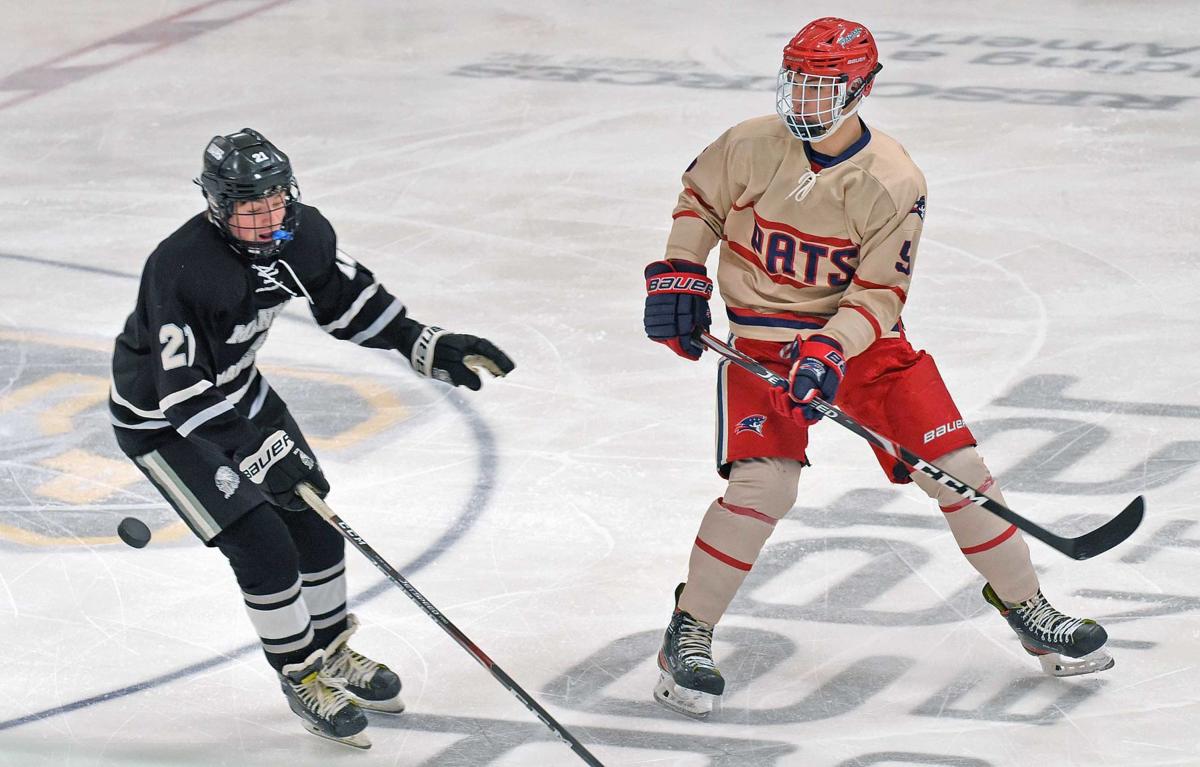 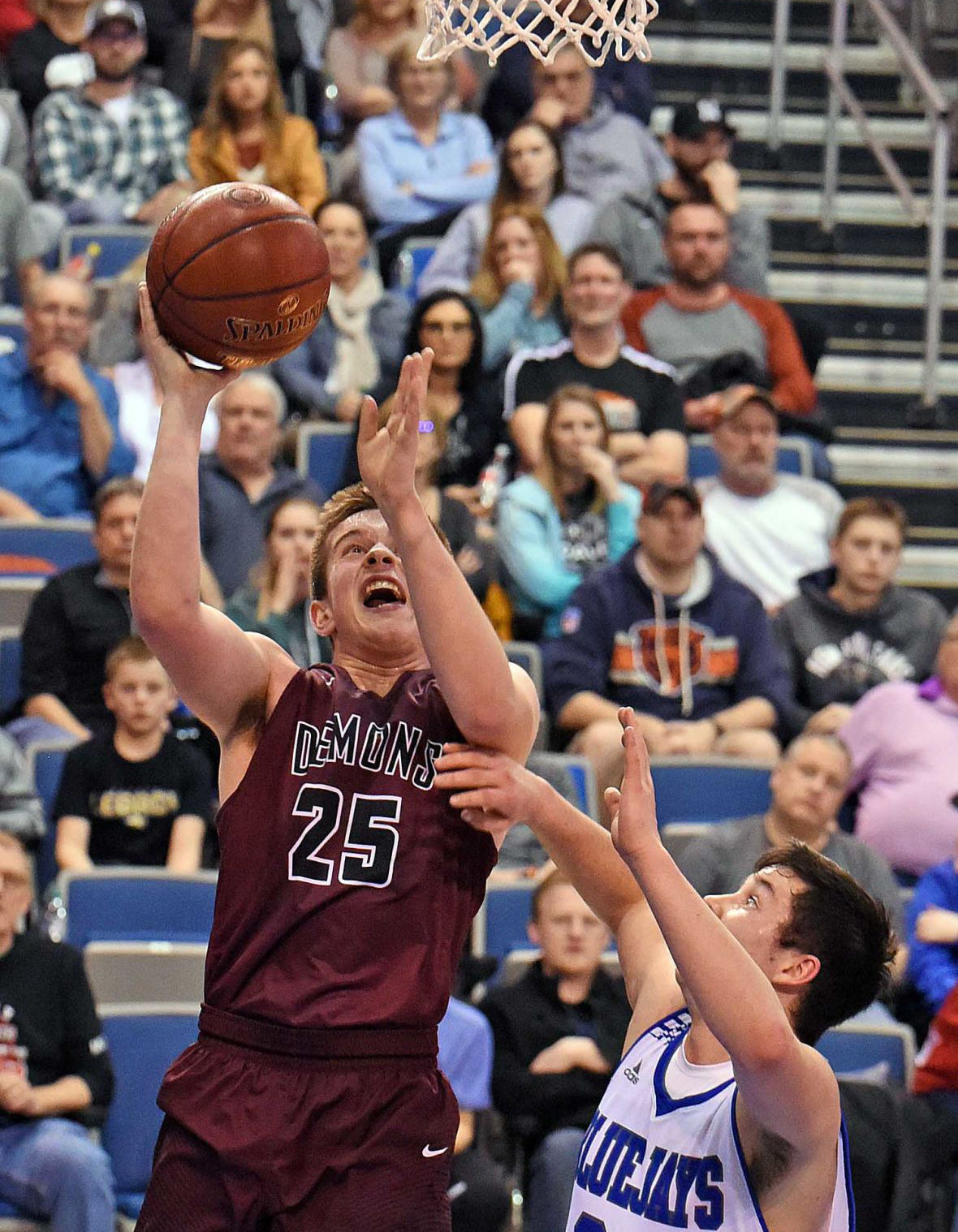 Bismarck's Logan Schaubert (25) shoots during the West Region tournament championship game in March. Getting court time of any kind the last few months has been a challenge, but open gyms have become available recently.

To a nauseating degree, the days we're living in have been referred to as unprecedented times.

With more than three months of minimal to no coach-player face-to-face contact, players have had to take responsibility for conditioning and preparing themselves. That, Wilhelm says, is nothing new.

"When I was a player, it was mostly on us. ... We were expected to hold ourselves accountable," he said. "The last five or six years that I've been on staff we've held them accountable. We're going to find out here in the next couple of months which guys have been in the gym and keeping themselves in shape. We'll see which guys have been putting in the time.

If the last week has been any indication, Wilhelm can breathe a sigh of relief.

"The gym has been opened, so we can get together and get some shots up. ... For the most part, from what I've seen, the kids at Bismarck High have done everything they could. I've been very impressed from what I've seen in open gym," he said on Friday.

Like many of his counterparts, Wilhelm is a planner. He wants his players in a comfortable routine. There's been none of that since mid-March, but Wilhelm realizes there can be no whining in basketball. Everyone is in the same boat, but some will fare better than others.

"The kids have to remember everyone has been dealt the same hand. ... The athletes who work on their own are going to have a chance to be the most successful in the upcoming season."

Other coaches echoed the importance of remaining positive in uncertain times.

"I look at what's going on, and we've got to be flexible, be positive and look forward. ... The way we're looking at it is we're planning on having a fall season. We're preparing for that until something changes," St. Mary's head football coach Dan Smrekar said. "I'm hoping and praying what we'll have a fall season."

"It's a tough situation. None of us have ever been through anything like this. ... We've got to make the best of it and take it as it comes," Clements said.

There are spring segments to the annual football, hockey and basketball cycles, all of which have been lost.

"Basically (the coronavirus protocols) have pushed everything back. ... Our offseason has been hampered. We missed the whole spring, but we're picking it up now," Century head boys hockey coach Troy Olson said.

That said, hockey players are not at a standstill.

"It's not too bad. Our kids have opportunities to skate twice a week, and one of our coaches, Tom Bushaw, puts on a camp. That's a five-week camp, which has been cut down to three this year," Olson noted.

Clements said his players assembled for the first time as a team on June 15.

With protocols regarding group sizes and distancing, there have been no real workouts. The emphasis has been on weight training and agility, but Clements said getting his players into a routine has benefits.

"Since things shut down back in March, the kids have basically been on their own all that time," Clements said. "At least there's a little resemblance of normalcy for them."

Whatever the Sabers accomplish over the summer will be on a voluntary basis, Clements pointed out.

"We can't make anything mandatory," he noted. "Right now we're providing an opportunity for kids to do what they want."

With important decisions regarding the coronavirus outbreak yet to be made all the way down the chain from the World Health Organization to local athletic directors, Clements said high school athletics are in a state of flux.

"What is the school climate and culture going to look like this fall? We have no idea. ... A lot of people have to make decisions moving forward," he observed.

And it's not just about football in particular or athletics in general, he emphasized.

"Take the football away. My big thing is the mental, social and emotional well-being of my kids," Clements said.

He hopes that the Sabers can salvage the remnants of a typical summer.

"Two weeks ago we would have gone to the UND team camp. ... We're still holding out hope that we can go to the Dickinson State team camp in the middle of July," Clements said. "And, hopefully, we'll be able to have our own camp toward the end of July."

Smrekar said there are clear limits on what can be done, but he's relieved that his players were able to resume some football-related activities last week. Previously, the St. Mary's coaches had no personal contact with their athletes.

"We had no contact with the kids. What we did at St. Mary's was get them some workouts to do at home, and I know some coaches were doing some virtual workouts. ... Now we're able to get some kids on the field for some movement and conditioning. And they're able to get into the weight room in very limited numbers. ... At least we've got them moving again."

"Everybody is in the same boat, so we'll wait and see and plan. ... In our situation and environment, plans can change daily. ... We're waiting to see what direction we're going to go with the camps when we get to July."

"We normally do four or five team camps in June, including Fargo, Sioux Falls and Wisconsin Dells," he said. "... Hopefully, the week after the Fourth (of July) things will start happening so we can get some open gyms and get to some team camps."

Schafer said the opportunities for open gyms in Mandan have been limited.

"We have summer physical education going on, so the gyms are in use most of the day. ... And floors are being refinished ... so they will be shut down for a couple of weeks," he observed. "At open gyms the boys just shoot, but it's still nice to make it available to them. ... This is a true offseason. For the kids to get shots up, they'll have to do it on their own."

As is the case with Schafer, Wilhelm says it's tough to watch June trickle away.

"June is a busy month, so for us it's a whole lot different from what it's been the last five or six years," Wilhelm said.

He said the return to open gyms was a breath of fresh air.

He noted the three months away from his team has been a long dry spell. He said the open gyms were a lot more than a step toward normalcy.

"This isn't the first step. This is the only step we've seen," he said. "Everyone wants to see some normalcy, so it's been pretty cool to get back in the gym."

He may be on limited duty, but at least Calob Larson isn't in dry dock as is the case with legions of track athletes nationwide.

It's been a terrible spring for Staiger

Ron Staiger feels terrible for what the coronavirus outbreak has done to senior athletes.

Even though spring sports seasons were canceled nationwide, Gatorade remains highly active in the awards business.

Bismarck's Logan Schaubert (25) shoots during the West Region tournament championship game in March. Getting court time of any kind the last few months has been a challenge, but open gyms have become available recently.