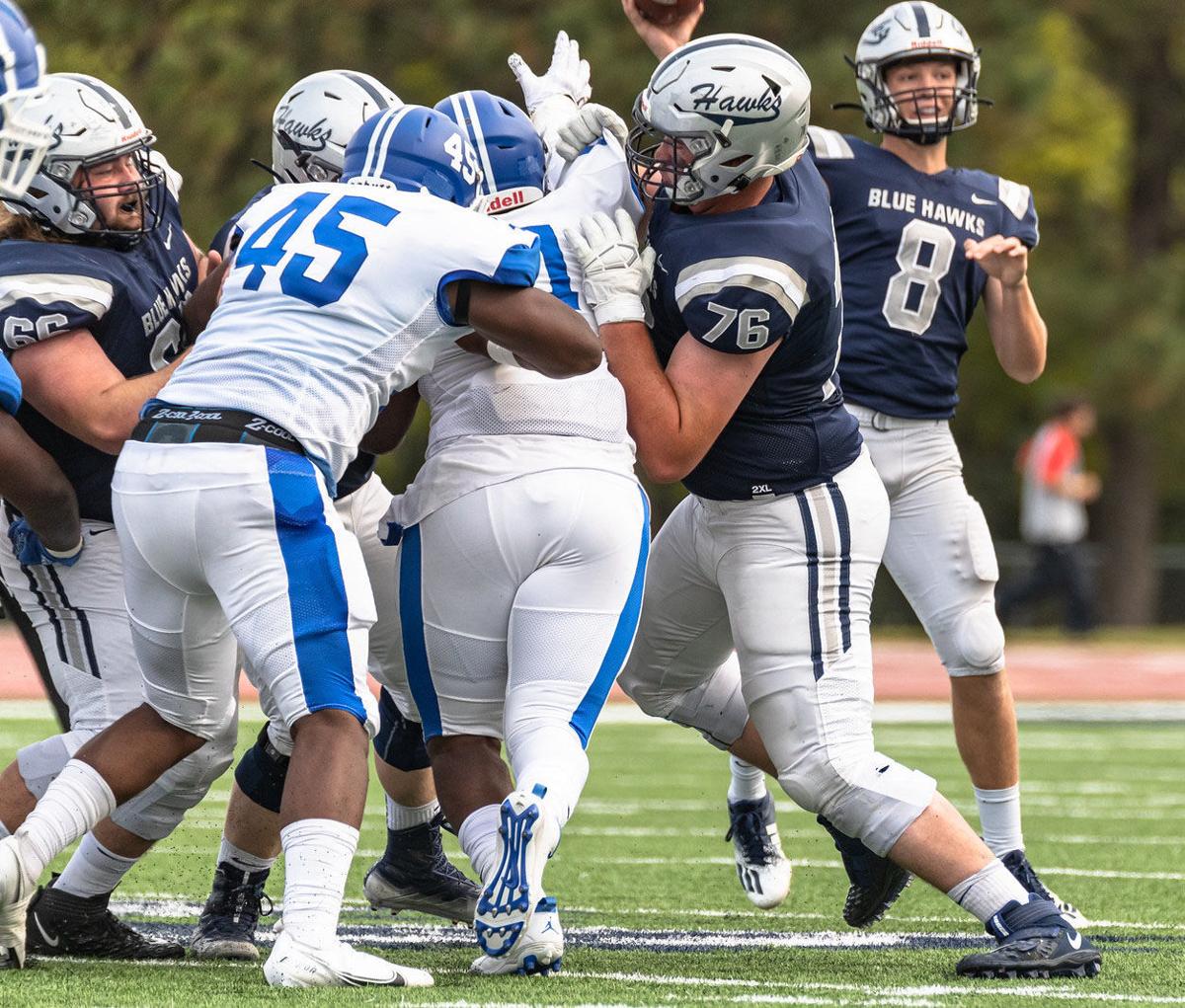 The 6-foot-7, 315-pound sophomore from Beach High School bears a striking physical resemblance to his father, Rory, who as a 6-6, 320-pound guard and tackle starred for the Blue Hawks from 1989 to 1992 after one year as an Oklahoma Sooner.

Rory had big shoes to full. Gunnar is trying to fill them. And while they’re similar in stature, there is nothing similar about the style of games played by their Blue Hawk teams.

“The game has evolved,” said offensive line coach Pete Leno, who coached both father and son. “Our approach now is much more balanced, and the game is more spread out. When Rory played, it was between the hashmarks and a game of attrition.”

Differences aside, Gunnar’s teams are experiencing success on the field, just like his dad’s. Gunnar and the 2020 Blue Hawks locked up the team’s sixth straight North Star Athletic Association championship with a 26-14 win over Valley City State last weekend. They can complete their first undefeated regular season since 2003 and go 9-0 with a win over Presentation College on Saturday at Biesiot Activity Center. That’s a remarkable feat in the year of COVID-19.

“There were times when we weren’t sure we’d get through fall camp and going week by week not knowing if we’re going to be able to play,” Gunnar said. “There are a lot of teams not able to play. So we said, hey, we have opportunity, let’s go out and do this.”

DSU head coach Pete Stanton finished his career at the school the season before Rory arrived, but his brother, Rob, put up big numbers following the pulling guard.

“It was definitely a different time as far as what we were doing offensively,” Stanton said. “Rob ran the ball behind him. My brother gained a lot of yards by getting on Rory’s hip. And they set a season rushing record (3,456 yards in 1990) that may never be broken. Now with RPO (run-pass option), Gunnar is a left tackle and he’s a guy we’re going to use in different ways.”

The difference comes up in discussions.

“We talk about that quite a bit,” Gunnar said. “He played back in the day when the only time they went shotgun was when they punted, as coach (Hank) Biesiot always said, 'when he played it was always downhill, smashmouth and we’ll even tell you where we’re coming but you can’t stop us.' I would have like to have tried it. It’s kind of difficult to block not knowing if the quarterback has handed it off or thrown it.”

Rory gave the University of Oklahoma a try out of high school and the belief was he had the skills to stay there at the end of the Barry Switzer era. But he returned to western North Dakota to be closer to the family farm. That also played a role in Gunnar’s school choice. Like his dad, he’ll return to the family farm when his career is over.

“I have as much of a passion for farming as I did for football, and so does he,” Rory said. “Knowing some kids can’t get away quick enough from their dad, I’m humbled that he wants to share this with me.”

“My dream is to return home and farm with dad,” Gunnar said. “That was part of the reason dad came back from Oklahoma. Just the hour drive from home was a relief for me.”

It was his passion for the farm life and football that led Rory to pass on advice to Gunnar when the recruiting process began.

“My dad told me that if you don’t have the desire to play college football, don’t do it. Because if you’re not going to put your blood, sweat and tears into it to achieve your maximum potential, don’t do it. I told him I wanted to do it. I just want to do my best to follow in my dad’s image,” Gunnar said.

That doesn’t surprise the people who know them.

“That farming work ethic is always there. If you’re around them in a social environment, you’ll see they’re more like brothers than father and son,” Leno said.

It would have been unheard of in Rory’s day for the Blue Hawks under head coach Biesiot to lead the conference in passing as it does this season. It was unusual for the Hawks to not lead in rushing (they are fourth this season).

“The game is completely different,” Rory said. “I think about RPO today. For us, it was either a run or pass or audible at the line. You were trying to pancake the guy on the other side. To play offensive line today is a helluva lot harder than the type I played.”

When his career ended after the 1992 season, Rory returned to the family farm near Golva, from where Gunnar emerged 30 years later and where he’ll return after his career is over. You might say the granite didn’t fall far from the farm.

“Being able to play college football at any level is an honor; the memories and the fun I had at playing at Dickinson State,” Rory said. “To be able to have my son experience his own and be part of that brotherhood is special.”

Gunnar’s 2020 season comes to a close this Saturday. It will be the final game of 2020 for the Hawks, but not the end of the season. The NAIA will conduct its championship playoffs in the spring. A win on Saturday would ensure Gunnar a second playoff appearance and second conference title.

After this, Gunnar will have two more years to reach the lofty marks his dad left on DSU football and on the farm. He has the same traits that made his dad great.

“It’s a hard life, but my son suffers from the same terminal disease I was lucky enough to catch and that was dirt under my fingernails,” Rory said.

“He’s solid and dependable and you need that from a left tackle,” Leno added.

St. Mary's defense stiffened when it absolutely had to.