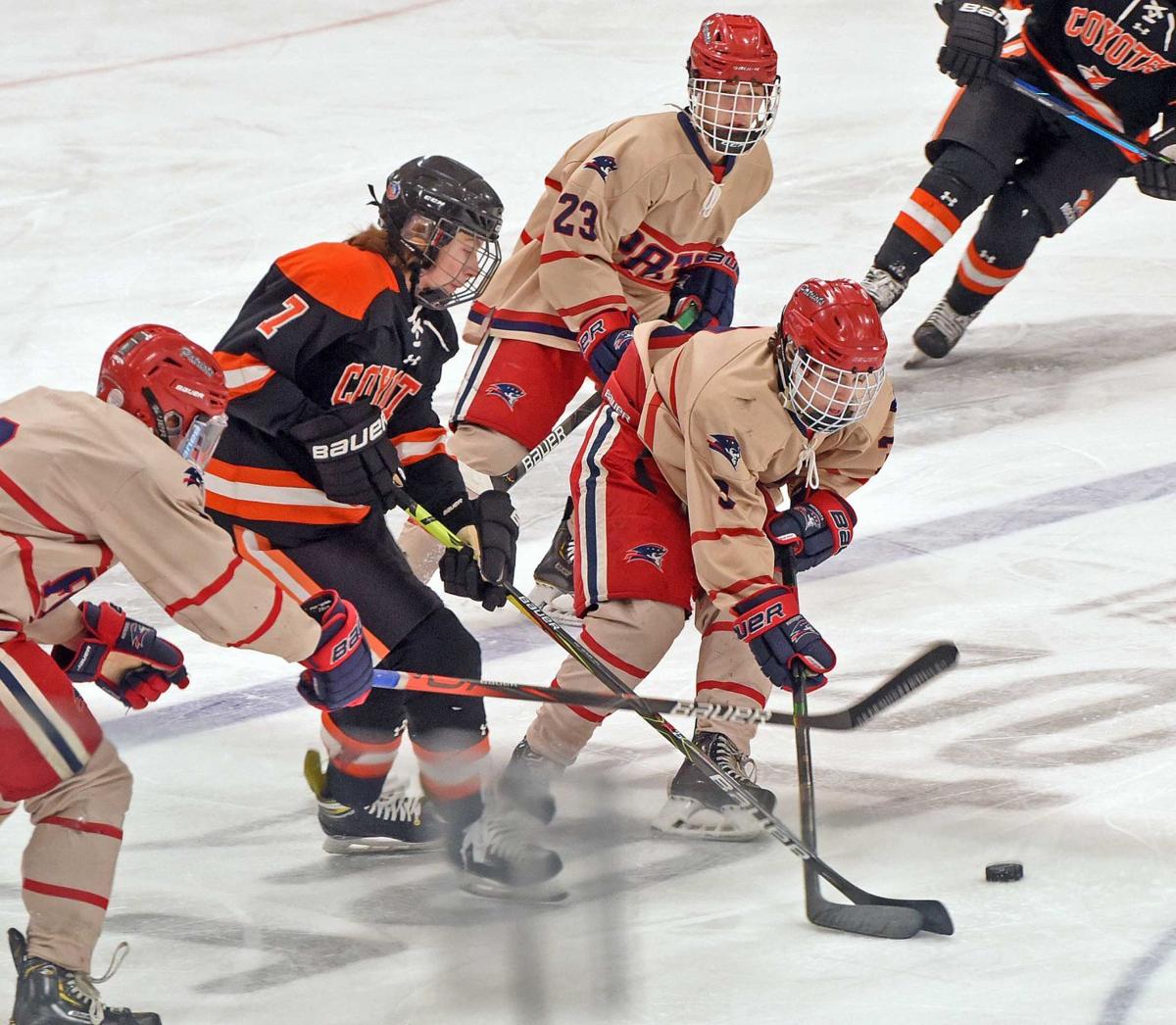 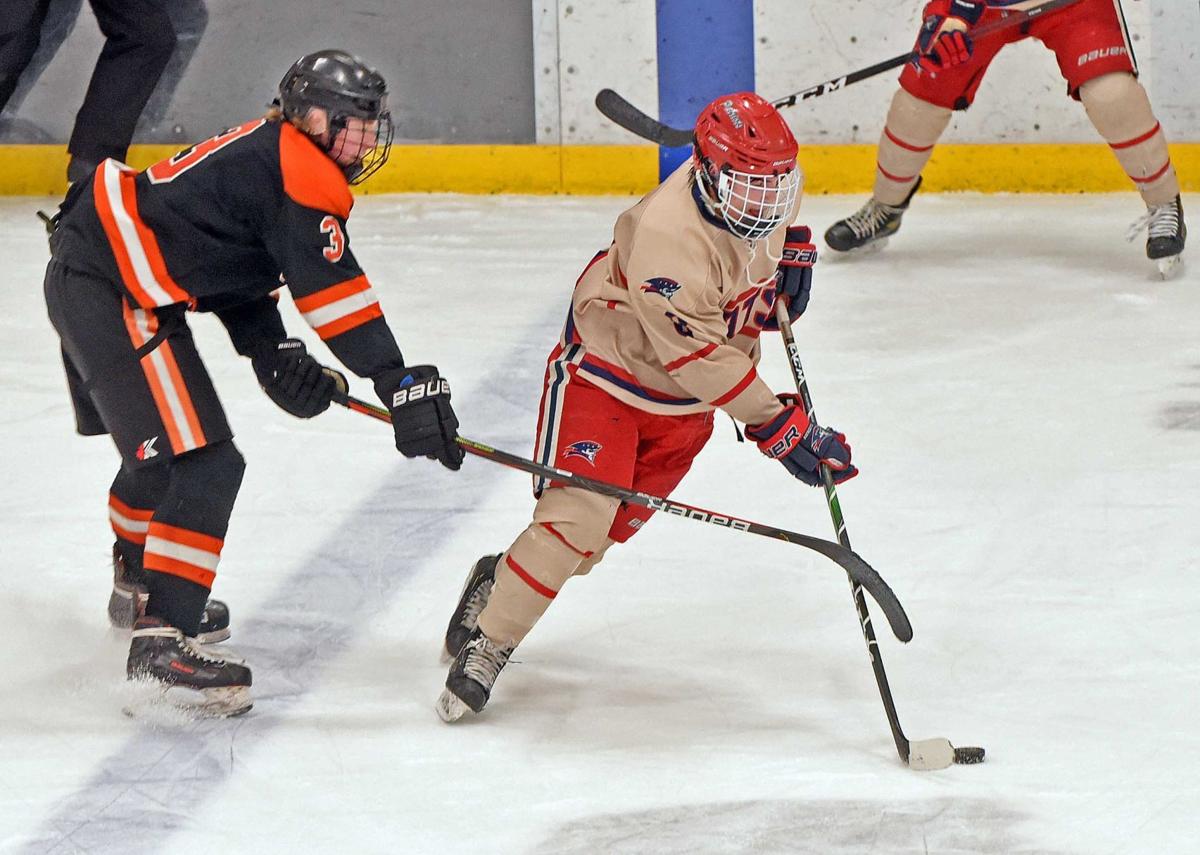 Century's Alexander Samardzic (8) skates up the ice as Williston's Ashton Collings tries to poke the puck away during Thursday night's West Region tournament semifinal game at the VFW Sports Center.

It didn’t take Century junior forward Alek Fosland long to realize that a shot on a goalie who already had made 48 saves, from an impossible angle, in sudden-death overtime, might not be the best option.

Fosland wristed a shot through the only spot not covered by Williston’s Mason Haugenoe 4:14 into overtime, lifting the top-seeded Patriots to a 4-3 win over the Coyotes in the semifinals of the West Region tournament Thursday at the VFW Sports Center.

The Patriots will play Minot, the last team to beat them, in the championship game on Saturday. Century has won three of four title games between the teams.

The dramatic ending extended Century's winning streak to 12 games and sent the three-time defending region champion into the title game for the fourth straight year and the 12th time overall. Williston has not been in the title game since 2006 and will have to play its way into the state tournament on Saturday.

“There are no secrets this time of year. We know what Williston has and they played a fantastic game and we played pretty well,” Century coach Troy Olson said. “That was just a battle. Honestly it could have gone either way.”

Fosland made sure it went the Patriots’ way.

Gathering the puck in the corner, he skated out along the goal line waiting for someone to flash to the net. When that didn’t happen, he did the next best thing.

“I was looking to pass but the lane kinda closed so I figured I’d just shoot it and it went in … thank goodness,” Fosland said. “When you shoot from there, you’re not really expecting it to go in. I figured a shot was better than nothing.”

It was better than that and Fosland was mobbed on the ice as the Coyotes consoled their goalie. Haugenoe had kept the Coyotes in the game with 48 saves, but two early goals staked the Patriots to a 2-0 lead.

“It sure is nice to get scoring from all your lines,” Olson said of Fosland's goal. “I’m happy for the kid, he made a great play. What a great night for him.”

Ryan Keup scored from the right circle at 8:06 to open the scoring and Alex Samardzic added another goal at 9:12, scoring on a backhand after circling around the net.

Williston defenseman Jackson Ekblad scored the first of his two goals after intercepting a pass between the circles near the blue line and ripping it past Century goalie Casey Odegaard at 12:24. Odegaard had 19 saves in the game.

Williston tied it for the first time on Ashton Collings’ goal just 1:06 into the second period.

But just over two minutes later, Century’s Cru Walker put the Patriots back on top. Walker skated through the crease and when Haugenoe sprawled out for the puck but missed it, Walker had a wide-open net at 3:35.

A minute after that, Haugenoe stopped Samardzic on a breakaway.

“We put a lot of shots on him and he was stopping them. Props to him,” Fosland said of Haugenoe.

Williston followed that by killing a five-minute major penalty that ate up the last 55 seconds of the second period and the first four minutes of the third. They would also have to kill another penalty in the last 3:50 of the game.

In between, Ekblad scored again to tie the game at 13:07. Again it was a blast from the point through traffic that knotted the game. Kyle Mischke assisted for his second helper of the night.

“There’s really nothing that’s been easy for us all year,” Olson said. “We grinded out so many close games to get that No. 1 seed and to come in here and punch our ticket (to state), I’m pretty proud of the guys.”

Winning three open events in a track meet is nothing new for Calob Larson. The Legacy senior has performed the feat twice at the state meet a…

High school coaches are well aware that graduation is part of the equation. Players come. Players go. Cycling in new talent goes with the territory.

As a sport based primarily on individual events, track and field, in theory, should have been among the activities least affected by the corn…

To one degree or another, early-season contests in high school sports are shakedown cruises. In the early going, coaches are concerned about …

Jesse White of White Shield was voted the Mr. Basketball award winner by the state's media.

Century's Alexander Samardzic (8) skates up the ice as Williston's Ashton Collings tries to poke the puck away during Thursday night's West Region tournament semifinal game at the VFW Sports Center.