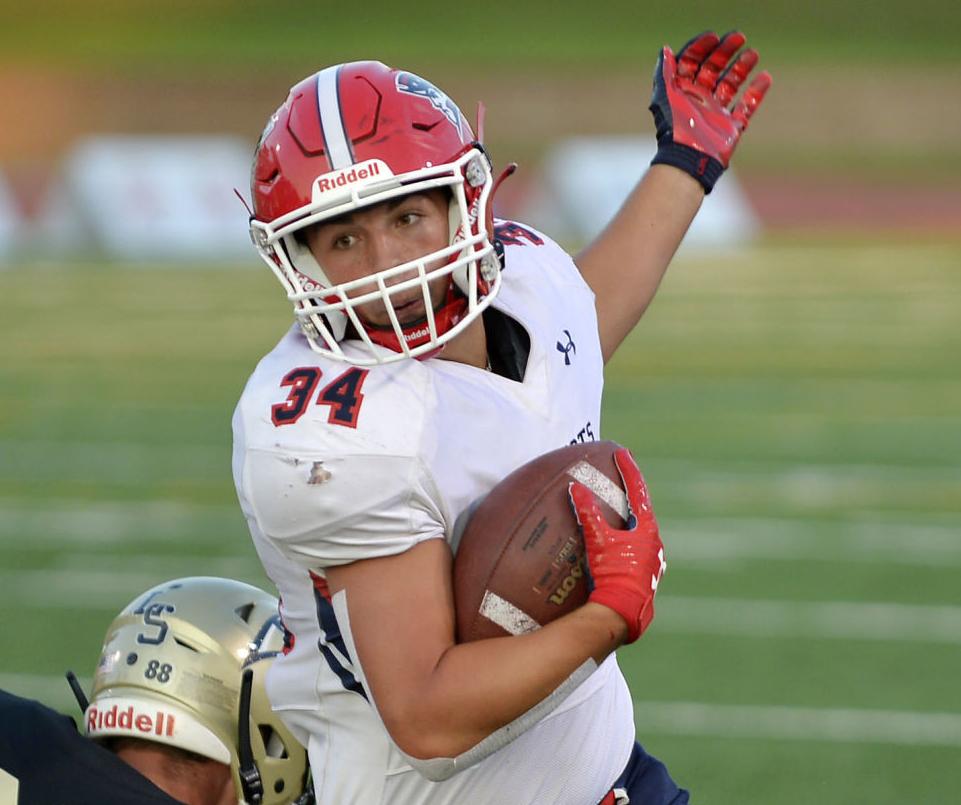 Century's Cade Garcia has run for nearly 300 yards and three touchdowns in two games for the top-ranked Patriots. 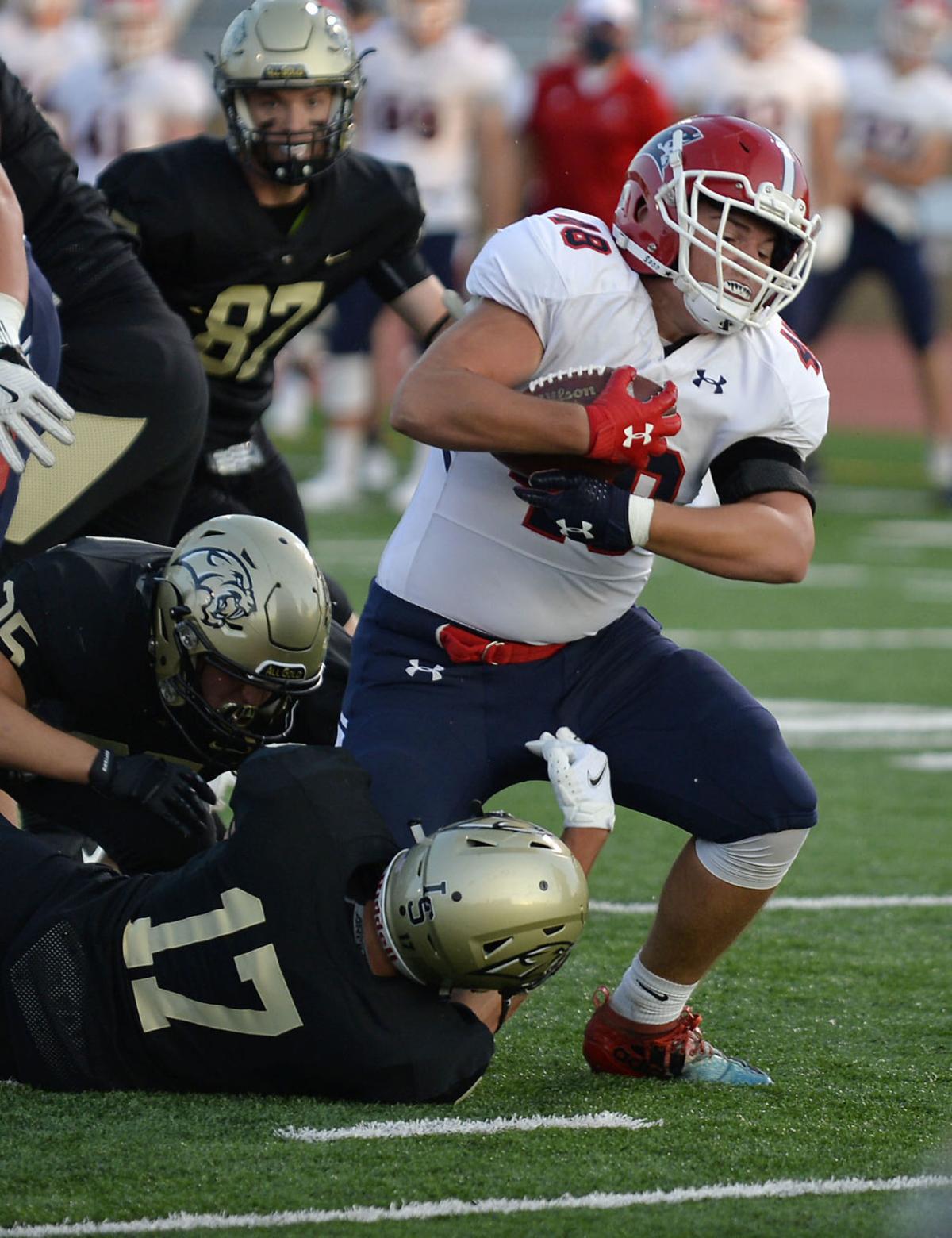 Century's Jaden Braun carries the ball during the first quarter of Saturday's game against Legacy.

Century and Legacy put on a show in primetime Saturday night.

In the season opener for both teams broadcast on ESPN2, the defending Class AAA Patriots led 20-0, but the Sabers made Century sweat it out late.

Legacy quarterback Clay Feland accounted for 386 yards off offense and four touchdowns, but Cade Garcia ran for 150 yards and two touchdowns in the Patriots 37-29 victory. The game started at 8:05 p.m. and ended at 11:11 p.m. A follow-up story, with comments from each team's head coach, will be published in Monday's edition of The Tribune.

Century blocked two punts in the game, but the Sabers’ big-play offense, triggered by Feland, brought the Sabers within 34-29 in the fourth quarter. Kickers Wade James and TJ Seidel traded 42-yard field goals. Legacy’s final drive, which started inside its own 10-yard line after a perfect punt by Colton Schulte, stalled as time expired.

The Patriots went 43 yards in eight plays, all runs. Jaden Braun capped it with an 11-yard touchdown run right up the gut.

Century’s second drive was much like the first – a heavy dose of Garcia. This time, the Patriots’ star senior running back got to finish it off, pounding it in from the 4-yard line for a 13-0 Century lead. Again, Century took over after forcing the Sabers into a 3-and-out.

Century’s special teams got into the act next. Still in the first quarter, the Patriots blocked a Legacy punt deep in Sabers’ territory. Two plays later, sophomore tailback Peyton Arndt scooted in from 7-yards out, making it 20-0.

The second quarter started with a bang for the Sabers.

A 28-yard pass from Feland to Nick Kupfer got the Sabers out of trouble. Two plays later, the two hooked up again, this time for a 45-yard touchdown connection.

The Patriots added a special-teams touchdown before halftime. It came on their second blocked punt of the half. With Feland back in punt formation, Century brought the heat and it was Brock Johnsen with the block. The ball hopped perfectly to Colton Schulte, who scooped and scored from 16 yards out.

Legacy coach Chris Clements did not pack it in with Legacy’s last possession of the first half.

Feland found Kupfer for a 21-yard strike on third-and-21 deep in their own territory. On the next play, Feland threw back-to-back strikes to Matt Jensen. The second one was right up the seam, with Jensen taking it 36 yards for a touchdown just 20 seconds before halftime.

Legacy appeared to go for an onside kick to start the second half. But kicker Seidel did not hit the ball right and it rolled just one yard to the 41, giving Century possession at that spot.

On the very next play, Garcia showed some speed to go with his power. The 5-foot-11, 195-pounder darted off right tackle and went 41 yards to the house for a 31-13 Century lead. Garcia was hobbled in the second half after getting kicked in the calf. Ron Wingenbach, Century head coach, said it was a contusion. Garcia did finish the game.

Legacy forced a Century punt and drove deep again. The Patriots’ defense stiffened, forcing a long field goal attempt. The 42-yard try was no problem for Seidel. The Sabers’ senior kicker, who is also a top soccer player for LHS, split the uprights from 42 yards with plenty of room to spare.

A second straight stop by Legacy put the Sabers’ sizzling offense back on the field. Feland, feeling it, broke off a 42-yard run inside Century’s 5-yard line. Two plays later, Feland was shoved into the end zone by teammates on a QB sneak, cutting the deficit to 34-29. Legacy went for two on the conversion, but a pass, following a penalty, was broken up in the end zone.

Century got exactly what it needed on the ensuing kickoff. Arndt, a sophomore, sprinted 50 yards on the return to the Legacy 43. The drive stalled, however, and the Patriots called on their kicker. Wade James delivered. The Patriots’ left-footer just had enough distance from 42 yards out to make it 37-29 with 6:31.

Both teams return to action on Friday. Century plays at Mandan (1-0). Legacy travels to Williston (0-1).

Players and volunteers get ready for Arab Cup

Tiger Woods Will Not Return To Golf Full-Time

Tiger Woods Will Not Return To Golf Full-Time

Century's Cade Garcia has run for nearly 300 yards and three touchdowns in two games for the top-ranked Patriots.

Century's Jaden Braun carries the ball during the first quarter of Saturday's game against Legacy.