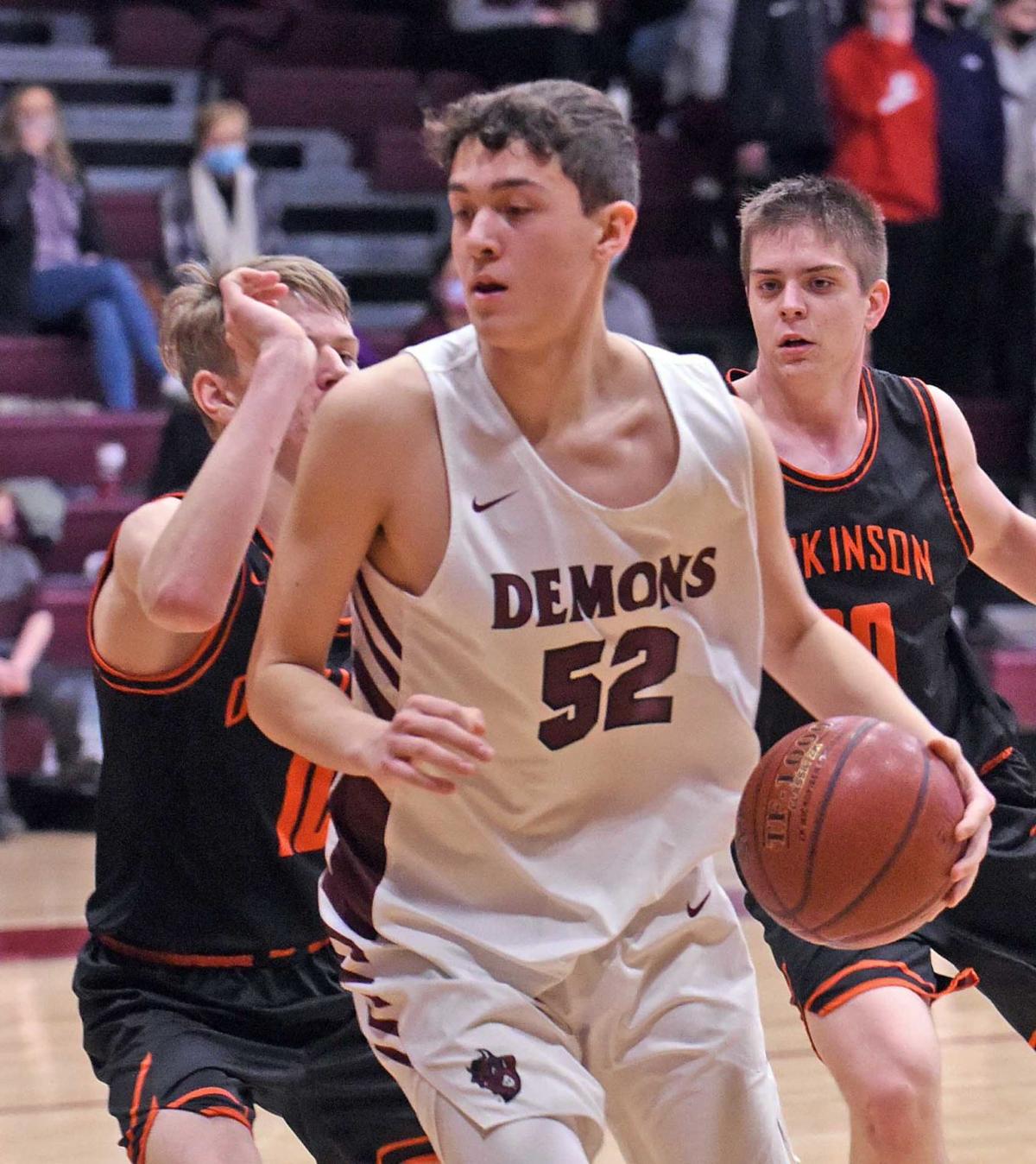 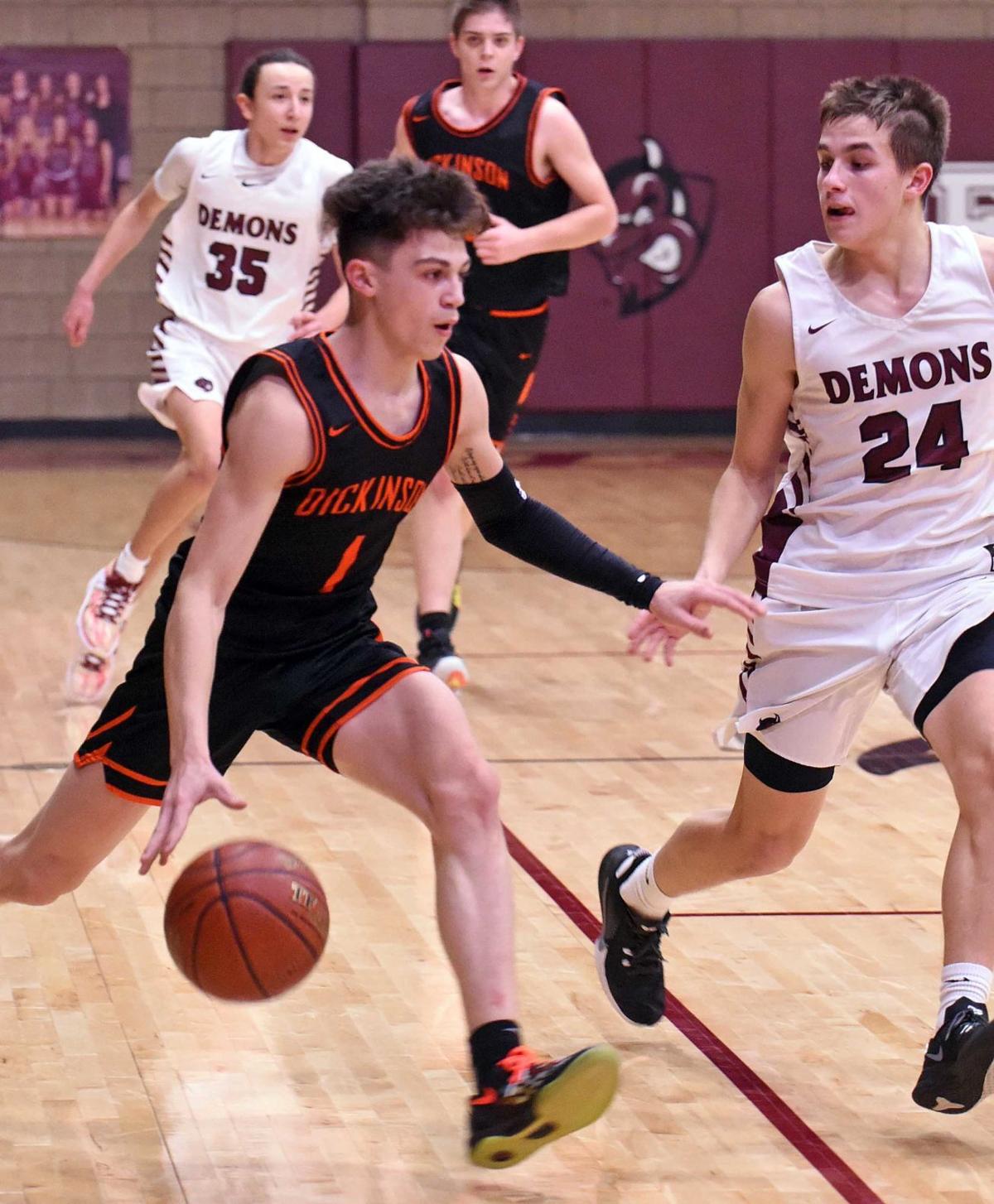 He wasn't alone, however.

The two teams combined for 25 3-pointers and seven double-figure scorers. But it was the Demons' talented 6-foot-5 junior who stood above the rest.

"The first half I was calm. My teammates were finding me and I was able to hit a couple threes and do some actual post moves," said Eaglestaff, who had 27 points at the break. "The second half, everybody got hot. We were just cutting and moving and everybody was getting layups it seemed like."

Eaglestaff scored eight points in the final 25 seconds of the first half as the Demons built a 51-34.

"I was just trying to pick my team up, and you know, Dickinson's a good team. We needed to keep the pressure on them because they can really shoot it," Eaglestaff said.

Exhibit A on that front was senior sniper Jayden Hocker. Held to two points in the first half, Hocker buried seven second-half 3-pointers to finish with a team-best 23 points.

"Dickinson's a good basketball team. They can score points in bunches and you saw that tonight," BHS head coach Jordan Wilhelm said. "For us, the things we pitched this week in practice, maintaining your energy, sticking to the system, our guys were fantastic with that tonight.

"We had a little dip in the second half, but part of that is talented kids just making plays."

The Demons held ace Dickinson point guard Alex Dvorak to 14 points, seven below his average. Dvorak is only a sophomore and ranks fourth in the West Region in scoring. Just above him is Eaglestaff (22 points per game).

"Treysen is one of the most talented kids to come through this program we've ever seen," said Wilhelm. "He can do so many things offensively, but what I really liked about what he did tonight was, he let the game come to him. He didn't force a lot of stuff. He can get his shot whenever he wants, he's that talented, but when moves the ball and trusts his teammates, it's going to lead to better shots for him. But no question, tonight, that was a special performance."

Gunner Swanson added 19 points for the Demons, including four 3-pointers. Tarin Walker totaled 10 points and Max Tschosik nine. Bismarck hung 106 on the board without one of their top players -- senior Logan Schaubert, who is sidelined with a calf strain. He is expected back soon.

After Tuesday's loss to third-ranked Jamestown, the Demons were looking at Friday as a chance to bounce back.

"We got our butts chewed in practice and we deserved it," Eaglestaff said. "Jamestown, they're a really good team, but we just felt like we didn't play up to our standard. Tonight, we got back to doing what we can do. Hopefully we can keep this momentum going."

The Demons improved to 12-4 with the win. Wilhelm is hoping his team can channel another sport coming down the stretch.

"You get into Super Bowl time and you kind of want to have that New England Patriots approach of, do your job to the best of your ability and good things are going to happen," Wilhelm said. "Tonight, I thought we got back to playing Demon basketball.

"We preach to our kids, we're putting you out there because we trust you and believe in you, you're not out there to just fill a role. You're out there because you're a good basketball player and tonight we certainly saw that from our kids."

The Demons are back in action on Thursday, playing at St. Mary's. Dickinson (4-10) hosts Mandan on Tuesday.

Century will take a 12-game winning streak into the state hockey tournament.

Williston's Ashton Collings knew his goal was big. The second it settled in the net early in the second period of Tuesday's playoff hockey ga…

To say Colton Schulte is a multi-sport athlete is as inadequate as saying  Mount Everest is large.

The visiting fans had their moment as Century wrestlers won three of the first five bouts in Thursday's West Region dual with archrival Bismarck.