Century pours in eight goals, skates past Bismarck High
Share this
{{featured_button_text}}
1 of 2 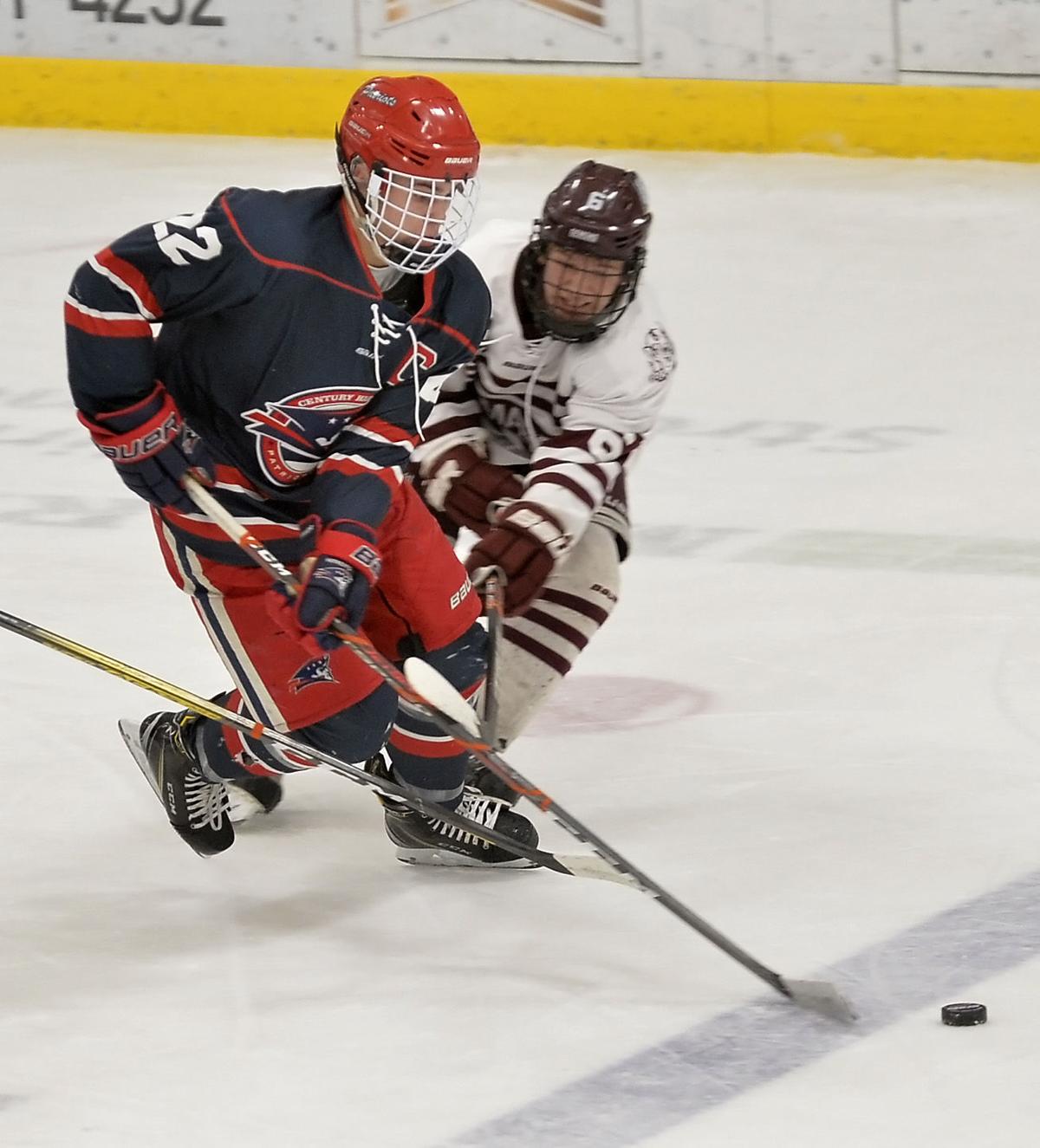 Century's Connor Hanson moves the puck up the ice while Bismarck High's Remington Richardson gives chase in the first period on Friday night's game at the VFW Sports Center. 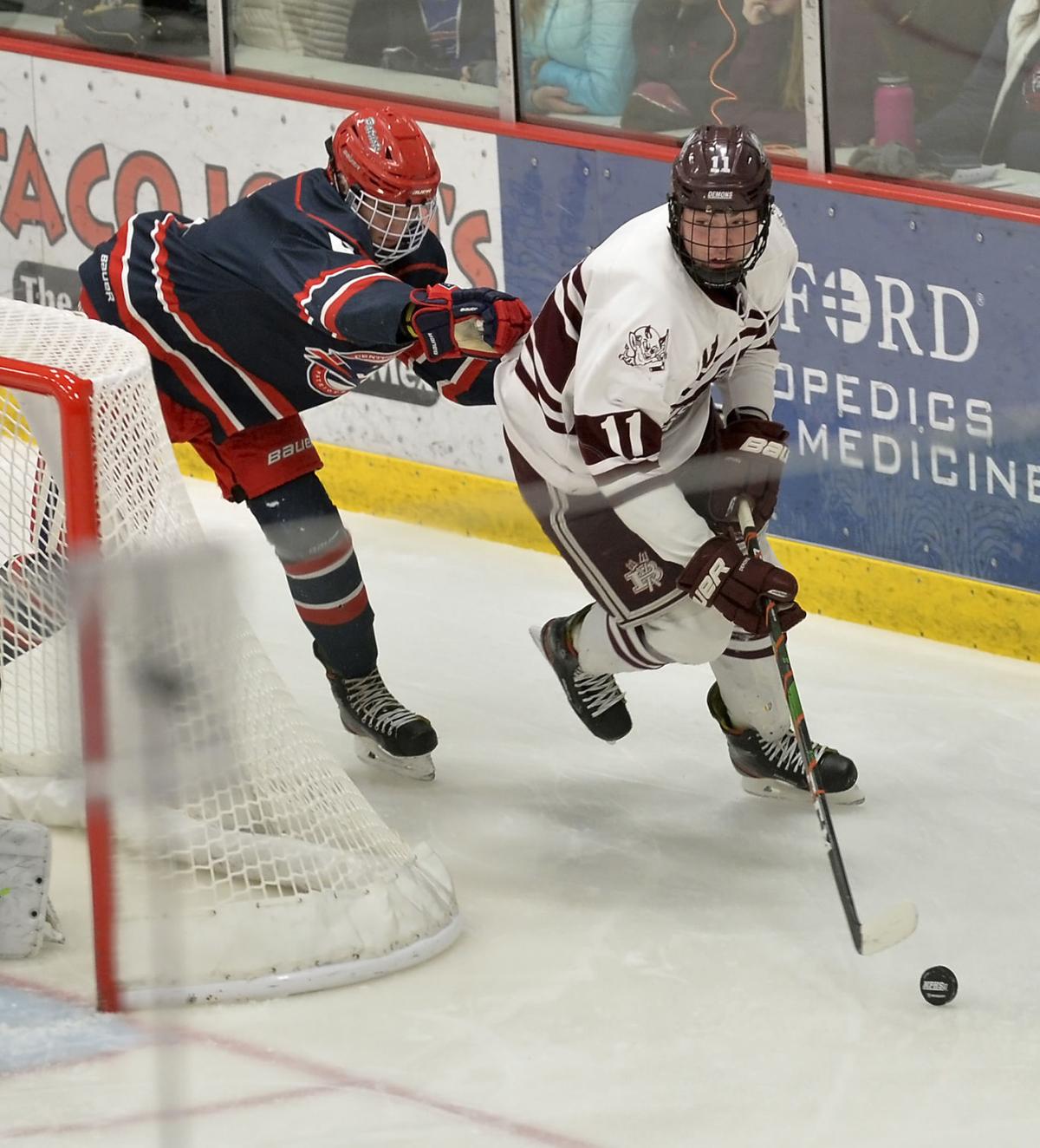 Bismarck Century hockey coach Troy Olson said his team didn’t come into Friday’s West Region game with Bismarck High looking to make a statement. But the Patriots did so anyway.

Connor Hanson scored three of his career-high four goals in the first period and another in the Patriots’ five-goal second period as Century routed the Demons 8-4 at the VFW Sports Center.

Bismarck scored two goals in the last 3:05 to make it look closer than it was.

“It’s something I can remember forever, getting three goals in the first period,” Hanson said. “It’s a lot more special because it’s a cross-town rivalry. Other than that, it’s just another hockey game.”

It is a little more than that, as Bismarck came into the game with seven wins in eight West Region games and a big points lead.

It became clear early on that this game would be different.

“We had a lot of questions coming off our game Tuesday in Minot. We had a rough one up there and I was proud of the way the guys responded,” Century coach Troy Olson said. “Our compete level was up where it needs to be.”

The teams combined for five goals in a penalty-filled first quarter. Hunter Acker’s goal for BHS at 6:27, Hanson’s third goal of the period at 10:00 and Remington Richards’ at 13:49 were on power plays.

The Patriots were whistled for four minors and a five-minute boarding that carried over into the second period.

“It was a cross-town atmosphere and you could see the kids take some undisciplined penalties,” Olson said. “It was good to see the guys fight through that.”

Hanson got the party started at 15:20 when he took a pass from Dawson Shirley on the left point and shot the puck through traffic and past Quinn Ackerman.

At 6:27, Acker got the puck under Century goalie Holden Ubl, who had earlier made one of his 28 saves from a scrum in front of the net. Nick Mortenson and Bismarck’s leading scorer — Joey Heinert — got assists.

Three minutes later, Hanson skated in alone to Ackerman’s glove side and sent a wrister that Ackerman appeared to have a bead on. But the shot got by his glove at 9:29 for a 2-1 lead.

“To get those took a toll on us,” Hanson said of the penalties. “To come out of the first period was something we put our mind to. … That (five in the second) was something we hadn’t been able to do all year.”

Hanson came into the game with seven goals. He netted his fourth of the night — the last of three Century goals in the first 2:13 of the second period — at the end of a three-goal flurry that took just 1 minute, 20 seconds. Colton Schulte scored as a 5-on-3 power play ended at 0:53 and Alex Samardzic scored on a power play at 1:07.

“(Connor) has been playing well all year,” Olson said. “He is a senior captain who did what he needed to do in a big game.”

The Demons pulled Ackerman, who had a total of 10 saves. Logan Hendrickson came on and made 11 saves in the period, but also gave up goals to Carter Schoneberg at 14:33 and Samardzic again at 14:41.

That finished the scoring for Century and set in motion the continuous clock that didn’t stop in the third period until Heinert scored again for the Demons at 14:56. Mortenson scored a power-play goal at 14:56 to finish the scoring.

When junior defenseman Breanna Helbling suited up for Tuesday's hockey game with Dickinson, she had no idea what lay in store. She just knew M…

Parker Zander is making up for lost time.

When junior defenseman Breanna Helbling suited up for Tuesday's hockey game with Dickinson, she had no idea what lay in store. She just knew M…

Legacy trying to hang in through flurry of injuries

Jason Horner has been here before.

Century's Connor Hanson moves the puck up the ice while Bismarck High's Remington Richardson gives chase in the first period on Friday night's game at the VFW Sports Center.