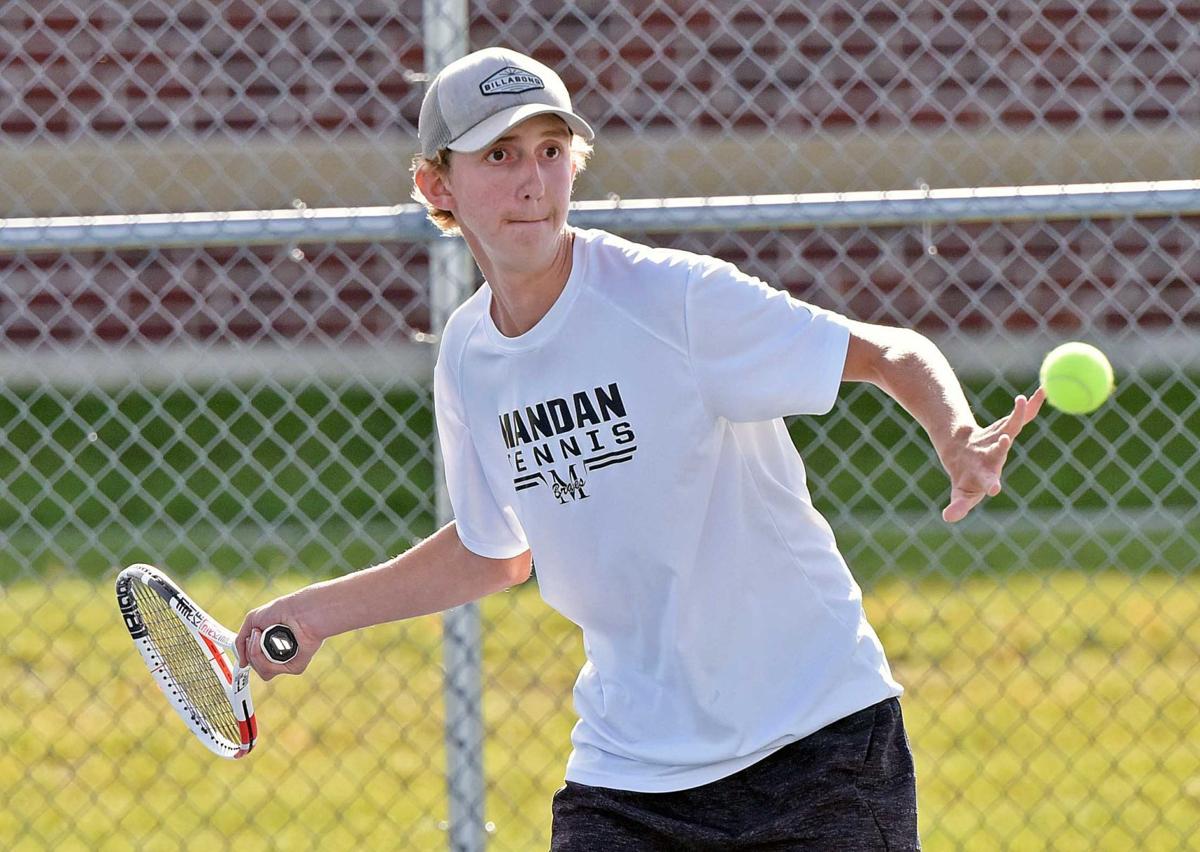 Karter Hatzenbuhler of Mandan plays a forehand during his No. 1 singles match on Tuesday against Tyler Wahl. 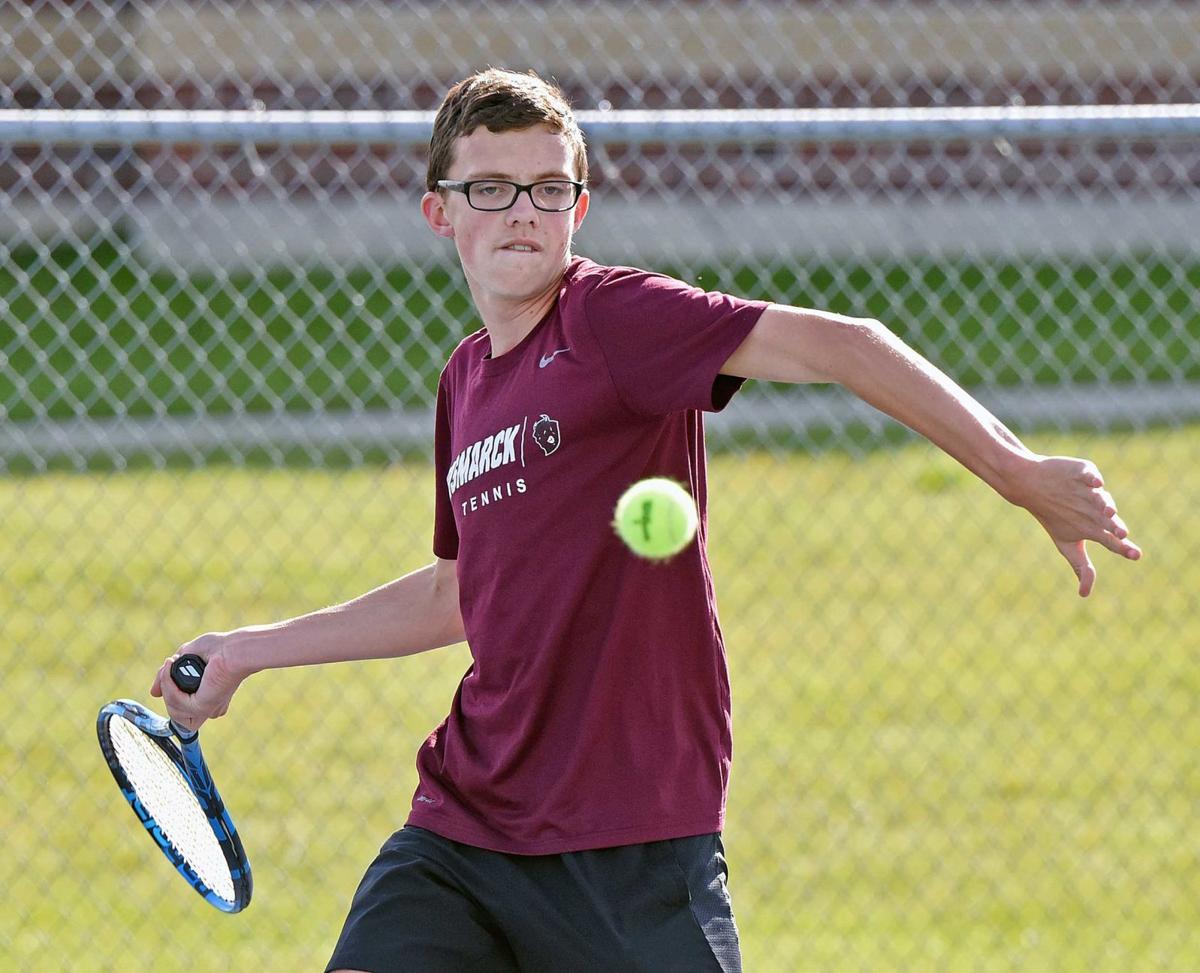 Tyler Wahl of Bismarck High eyes the ball before hitting a forehand during Tuesday's No. 1 singles match.

Mandan's last trip to the state tennis tournament was in 2013.

The Braves might have the team to break that streak this season.

Mandan won five of six singles matches and all three doubles tilts over Bismarck High on Tuesday in its final West Region dual of the fall.

"I thought we played well," Mandan coach Paul Christen said. "We played them in a nonconference match last week, so we knew the matchups were favorable. I thought we'd have a few closer matches,  but the guys really came out and played well today."

The Braves improved to 4-2 in region matches and 7-5 overall.

Aidan Ellertson won the No. 6 singles match over Kalob Zacha for the Demons' lone victory in the dual.

Hatzenbuhler, just a freshman playing at No. 1 singles, took down Tyler Wahl 6-2, 6-2. When the two met last week, it went three sets.

"I thought Karter took care of business," Christen said. "He didn't think he played his best match, but it was pretty straight-forward."

Jayden Arenz, the lone senior in the lineup for the Braves, surrendered just five games to Isaiah Koch.

Jared Christen, just a seventh-grader, dropped just one game in an impressive performance at No. 4 singles.

"He played well tonight," Paul Christen said of his son. "I don't want to say he's been up and down this season, it's just more he's starting to figure things out. He's being a little more aggressive trying to end points instead of just staying in it, waiting for the other guy to make a mistake."

Frank won the first set at No. 5 singles 6-0. Roger Karalus of BHS got three games in the second, but that was it.

"Colin's been coming along. He played well tonight and has been getting more and more consistent with each match," Christen said. "Jared, Colin and Kalob hadn't played varsity before this year. It takes a little time, but I think with all three of them they're getting more comfortable and consistency comes along with that."

Arenz and Anton Kozojed dropped the first set at No. 2 doubles to Karalus and Trystan Fernandez, but came all the way back to pull out a three-set win, 6-4, and 6-3.

Mandan sits third in the WDA standings behind unbeaten Minot (4-0) and once-beaten Legacy. The Sabers have two strong players at the top of their lineup with Jay Moylan and Anthony Janes.

Christen puts his team in the next tier with Century and Jamestown. The Patriots are led by sophomore Jared Pitcher, who is unbeaten in region matches.

The Braves lost to the Magi 9-0 on Saturday following a 7-2 win over Christen's hometown Williston Coyotes on Friday. He saw plenty of positives in the match against Minot.

"I thought we probably played as well collectively against Minot as we have in any match this season," Christen said. "We didn't win any of the matches, but I thought we were really competitive against a very good team."

Christen is hoping for a similar performance next week in Minot. Only the top four teams advance to state in Grand Forks.

"I do think we're starting to hit our stride," he said. "We have nine days here before region to keep it going."

NFL Week 6 Market: Will weather be a factor?

Facing the Century Patriots in volleyball on any night is a daunting task.

The Bowman County Bulldogs are hitting the stretch drive in good position to earn a playoff berth in the tough Class B 11-man Southwest Region.

The Legacy Sabers volleyball team is hitting its stride.

Ezra Hagerott scored two goals, the second proved to be the game-winner, as Minot defeated Bismarck 3-2 in the West Region tournament champion…

As the saying goes, two teams enter, one team leaves.

Karter Hatzenbuhler of Mandan plays a forehand during his No. 1 singles match on Tuesday against Tyler Wahl.

Tyler Wahl of Bismarck High eyes the ball before hitting a forehand during Tuesday's No. 1 singles match.