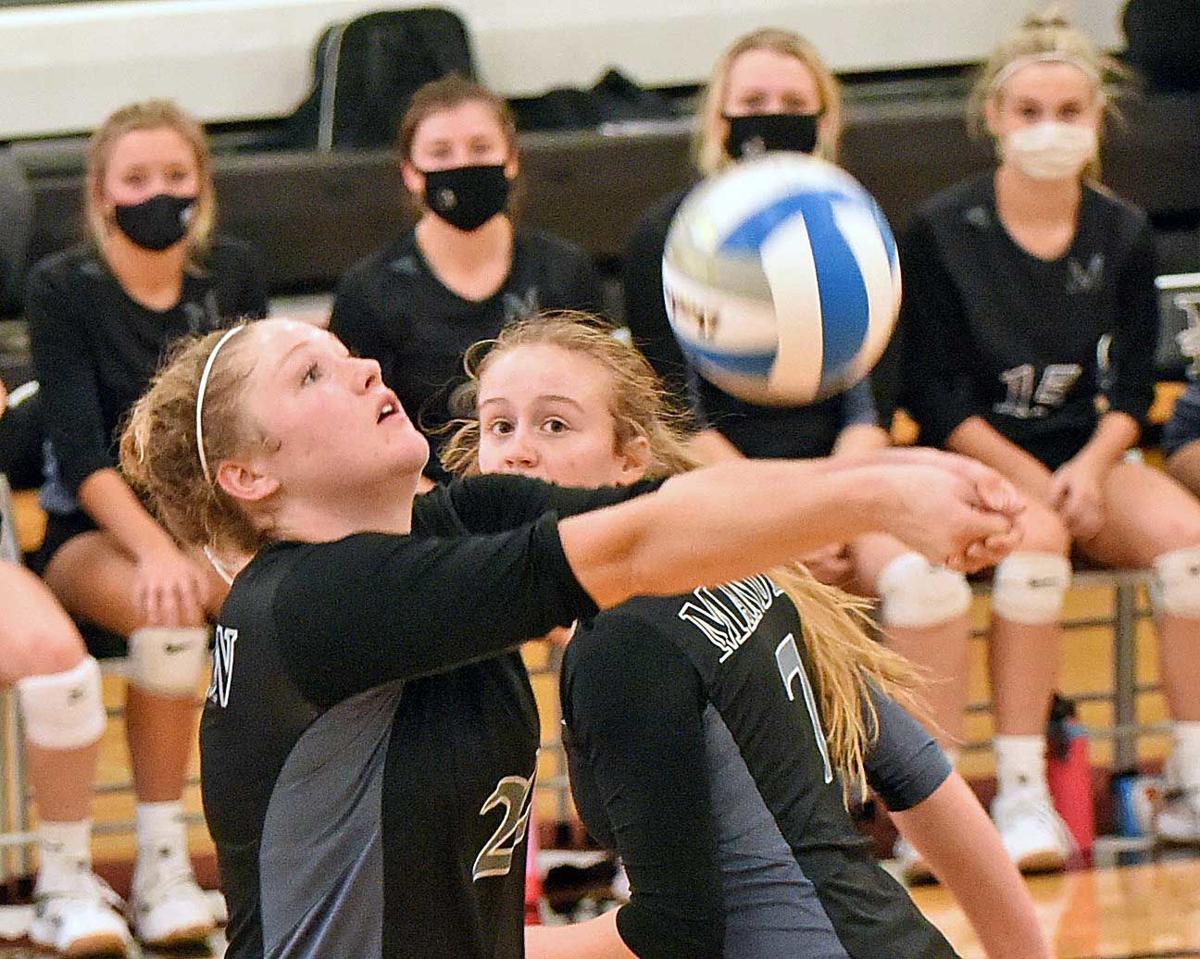 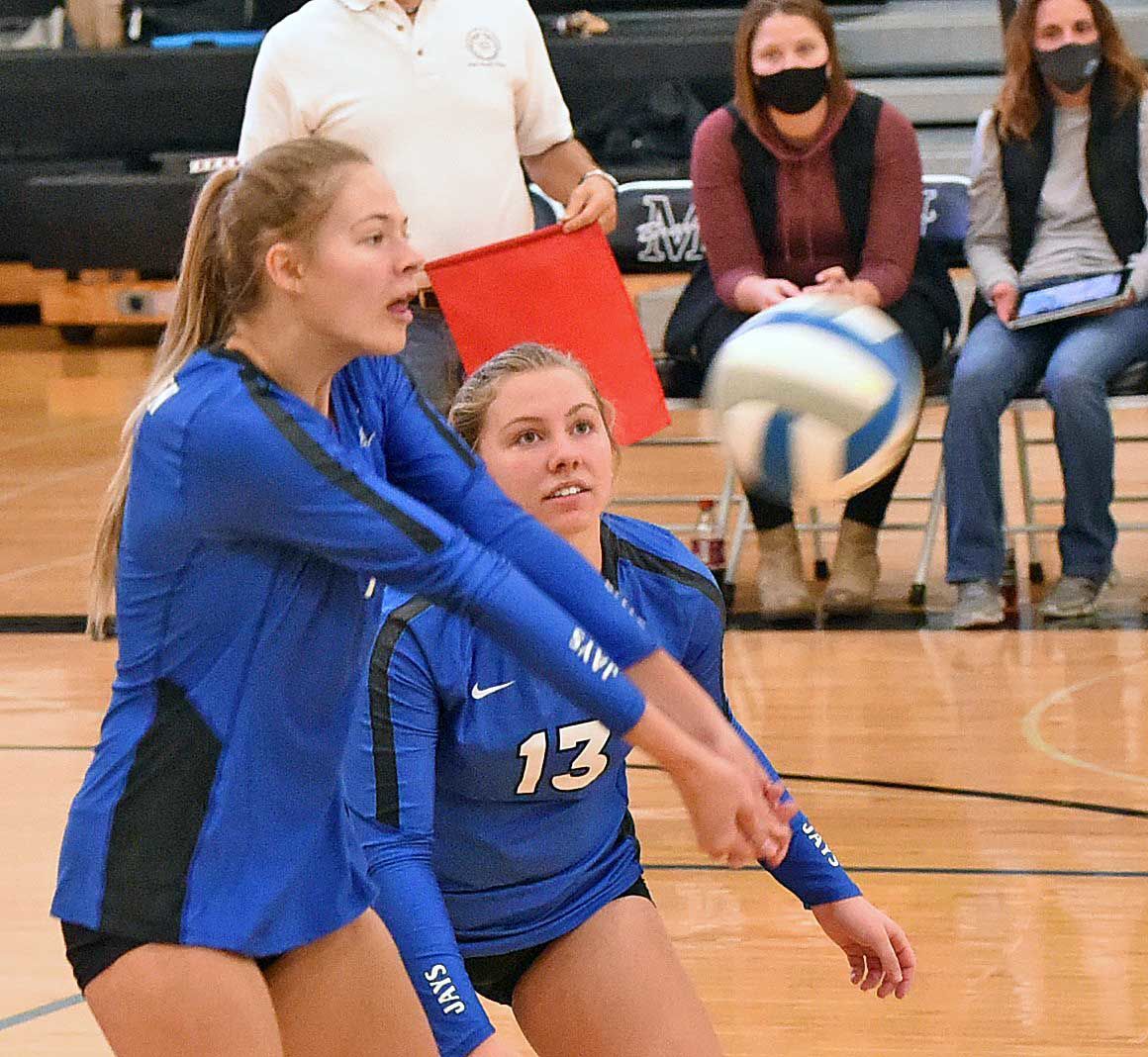 The ability that Jamestown High School head volleyball coach Sara Hegerle said was there all along came seeping to the surface Thursday night. And Mandan happened to be in the way.

As a result, the rejuvenated Blue Jays came away a 3-0 winner over Mandan on the road in the semifinal round of the West Region tournament.

With the victory, Jamestown moves into Saturday's 5 p.m. regional championship match with Century at Legacy High School. More importantly, the Blue Jays secured a place in next week's state Class A tournament in Fargo.

Mandan faces Bismarck at 2 p.m. Saturday at Legacy with a state tournament berth on the line. Legacy clashes with St. Mary's at 11 a.m. in the other state qualifier.

Jamestown, ranked fifth in the final statewide Class A media poll, lost both its regular season matches to Mandan. The Braves won 3-1 in September and Jamestown and 3-0 Nov. 3 at Mandan.

But Thursday, the Blue Jays were another team.

"After we lost the Mandan match we went to practice the next day and said 'this is not the way we want to proceed," said Ella Roaldson, a 5-10 senior hitter who had 13 kills on Thursday. "We worked really hard ... and came together as a team. Our goal is to play the very best we can every single game."

"We're playing in the moment and enjoying each other's presence," she added.

The Blue Jays played rabid defense, something that's become traditional with Hegerle teams. As a result of keeping the ball off the floor, Mandan was unable to generate any meaningful momentum. The Braves' longest run of the night was four points, and they had only one of those.

The Blue Jays jumped ahead 5-1 in the second game and Mandan got no closer than two points the rest of the way. Again, Jamestown displayed a kick at the end, outscoring the Braves 8-4 down the stretch to prevail 25-17. Roaldson added five more kills in the second game.

Behind Roaldson in the Jay attack came 5-10 senior Grace Hegerle with eight kills. She added a team-high 16 digs and two of Jamestown's nine aces. Katie Trumbauer, a 5-8 junior setter had 11 digs and four aces to go with 16 assists. Senior libero Rachel Schiele, who missed the Nov. 3 match due to appendix surgery, contributed 13 digs and an ace.

"She played the best she has all year, maybe in her career," Hegerle observed.

Roaldson said the turnabout was due largely to focus.

"Definitely. We always knew we were a good team. We just had to keep it all together," she said.

Roaldson said the Jays defended and served like Jamestown teams are supposed to defend and serve on Thursday.

"The Blue Jay program as long as I can remember has won the serve-and-pass game and has won matches. Serving and defense are skills in volleyball that bring the most momentum."

Coach Hegerle said her team has finally come together as a selfless unit in its two tournament matches.

"We haven't been able to put together a team that would fight for each other. ... We've been so disjointed and disorganized. ... This match is a good representation of who we are and who we've been working to be," she noted.

Hegerle said the Jays' aggressive serving was a key component in the match.

"We served so tough tonight, and they (Mandan) are a very good team," she said. "I thought we won the serving game and started to control the tempo at the very beginning."

Thursday's loss was the first for the Braves in eight starts.

Mandan coach Anna Folk said the Braves didn't hit the floor with a sense of urgency.

"We didn't come out as dynamic as I was hoping we would, and we had too many errors," she said.

She said some of those hitting errors may have come from overcompensating for the sterling Blue Jay defense.

Jamestown has now qualified for the state Class A tournament five straight seasons. Mandan will be shooting for a fourth straight state tournament trip on Saturday.