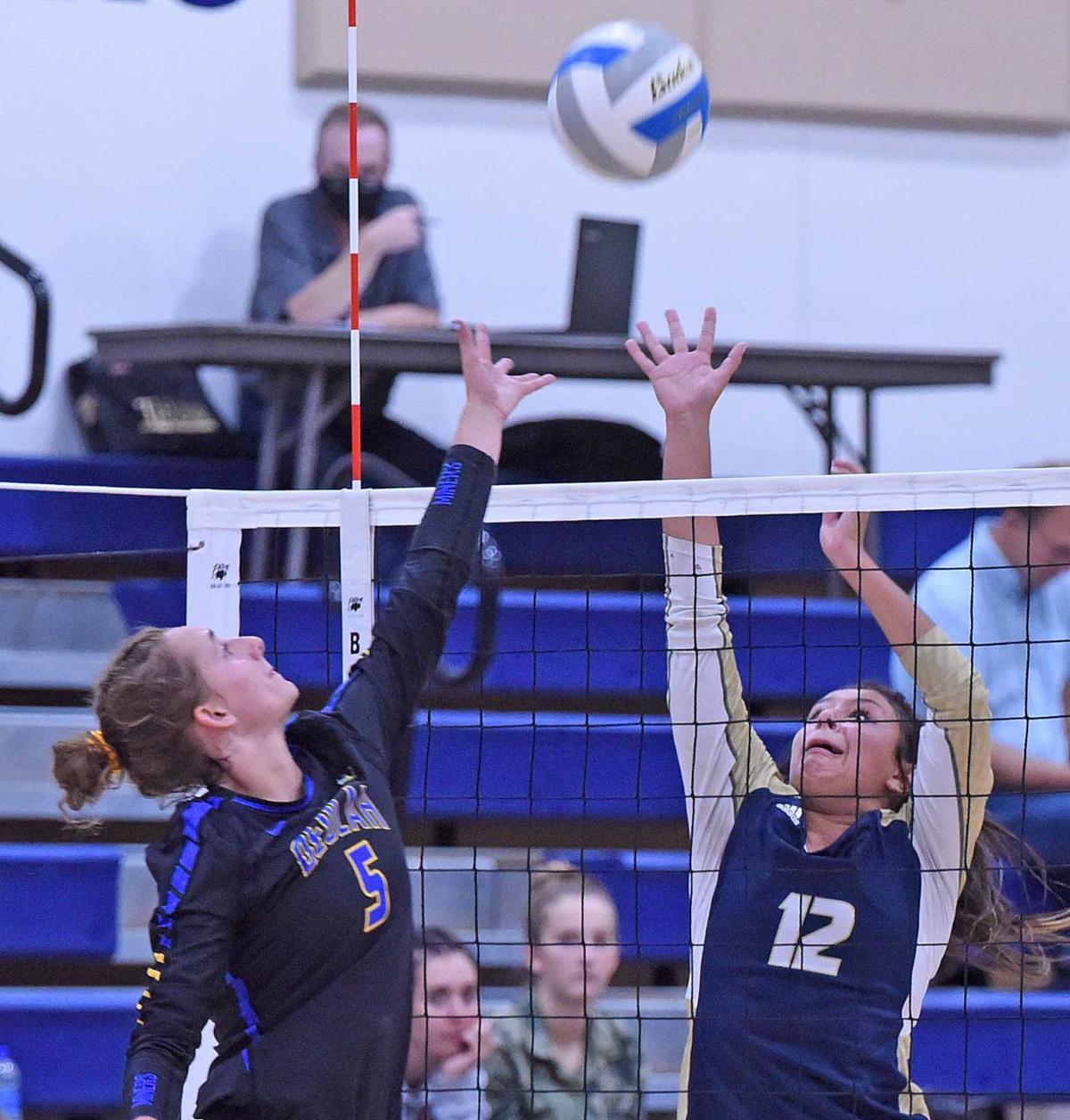 Beulah's Sadie McGraw (5) and Shiloh's Alyssa Larson (12) reach for the ball at the net during Tuesday's match in Bismarck. 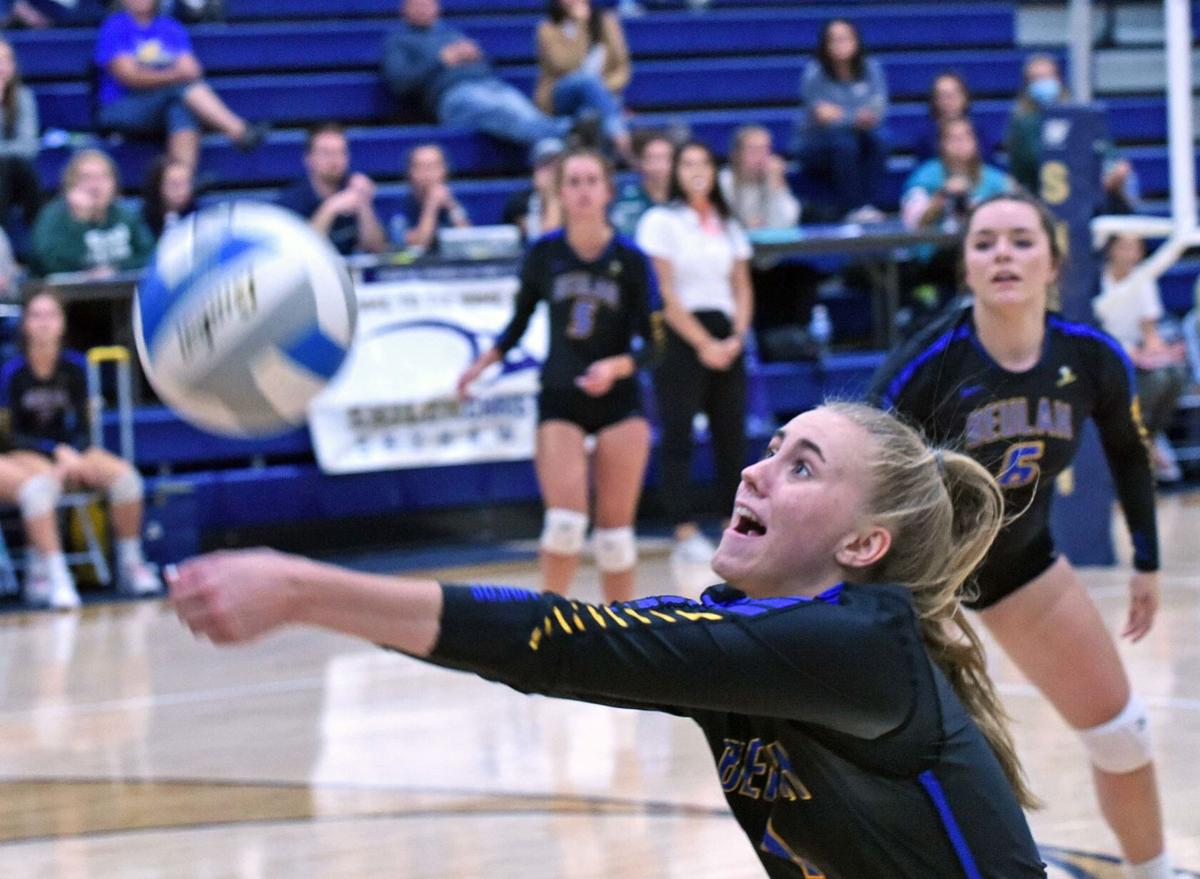 Beulah's Kyra Barmoen makes a save on the ball during Tuesday's match against Shiloh.

It may have been their season opener, but the offense was in midseason form for the Beulah Miners.

“That was our first one. I know they had one under their belt, so it’s always kind of getting those jitters out,” Beulah coach Brian Filibeck said. “I thought we handled that pretty well.

“We’ve got an experienced crew, so I think that helped us get going early on. It’s nice to get that ‘W’ out of the first night.”

Beulah pulled away late to take the first set and Shiloh Christian evened things up with a big run in the second. But the Miners fended off a big comeback bid by the Skyhawks and grabbed the momentum late in the third and finished off the win with a strong fourth set.

The Miners were executing their offense perfectly.

“When we can have good ball control and pass … we have a couple different play sets we run and we ran a new play tonight in sets 3 and 4 and boy, we executed it perfectly,” Filibeck said. “I was really happy to see that.”

“I thought it was a really good game,” Skyhawks coach Tricia Sorensen said. “We knew coming into it that Beulah was a really high-powered offensive team. We knew they had a lot of height, good blockers, good hitters. So we knew it was going to be a fight from the beginning.

“We have a lot of girls in new positions and so figuring out a rotation, this was a good match to have early in the season.”

Kinsey Zuroff, a 5-foot-9 junior outside hitter, paced the Miners with 10 kills and four aces. She added five digs and a block.

Directing traffic for the Miners were their two setters -- junior Kennedy Schock led the way with 13 assists and senior Kyra Barmoen finished with 10.

“We’ve got two quality setters and we’ve got a lot of hitters with big arms,” Filibeck said. “We’ve probably got six hitters that can swing hard and put the ball down so it gives us a lot of balance. That’s nice to have.”

Beulah opened the match reeling off the first seven points and the Miners finished on a 4-2 burst to turn a late 21-15 lead into a 25-17 victory. Jenna Koppelsloen had a block and Olivia Martens finished with a block for set point.

Malina Reynolds had a pair of aces and a block in a 6-0 run early in the second as the Skyhawks built a 16-10 lead. Gabrielle Kraemer had back-to-back aces to close a 5-0 run that pushed the lead to 22-13 and Brynn Fuller had a kill on set point for a 25-15 Skyhawks win that evened it up 1-1.

The third set was back and forth early before the Miners went on an 11-5 burst that built a 17-11 lead on a block by Beauchamp. An 8-3 run by Shiloh pulled the Skyhawks within 20-18 on a block by Reynolds and a kill from Kursten Fuller. But Beulah fended off the rally, taking the lead with a 25-21 decision.

The Miners’ experience paid off when momentum started to swing at key points in the match.

“You have to have someone in there when you lose a couple points, someone’s got to take charge of the team and say ‘Hey, let’s get back on track’ and I think we did that in a couple spots tonight,” Filibeck said.

Kursten Fuller led the Skyhawks with nine kills and three aces in addition to 17 digs and a block.

Reynolds and Alyssa Larson each had five kills and Wood four.

Kraemer had 21 assists, Larson had a team-high 19 digs, Wood led Shiloh with 1.5 blocks and Brynn Fuller had a team-leading three aces.

Sorensen was happy with the way the team competed despite the setback.

“We were kind of on a roller coaster of emotions,” she said. “Our highs, we played really, really well and then we kind of got in our heads and didn’t necessarily know where we were going all the time and made a lot of unforced errors at times. But our highs were really good to see the potential that we have to play at.

“They have a lot of returners and a high-powered offense. We tried to stay aggressive and keep them out of their offense but they’re a good team so they can always get back into their offense.”

Shiloh Christian (1-1) is off until next Tuesday, when they visit Dickinson Trinity. Beulah (1-0) travels to Center-Stanton on Thursday.

On Thursday, the Region 4 football matchup between Shiloh Christian and New Salem-Almont had all the makings of a battle between regional cont…

Legacy senior Maggie Sorensen is in her first year as a full-time outside hitter on the Saber volleyball team.

Defense shines for undefeated Flasher in sweep of Shiloh

The Flasher volleyball team’s defense has been a work in progress.

Century holds off Demons in four

Beulah's Sadie McGraw (5) and Shiloh's Alyssa Larson (12) reach for the ball at the net during Tuesday's match in Bismarck.

Beulah's Kyra Barmoen makes a save on the ball during Tuesday's match against Shiloh.