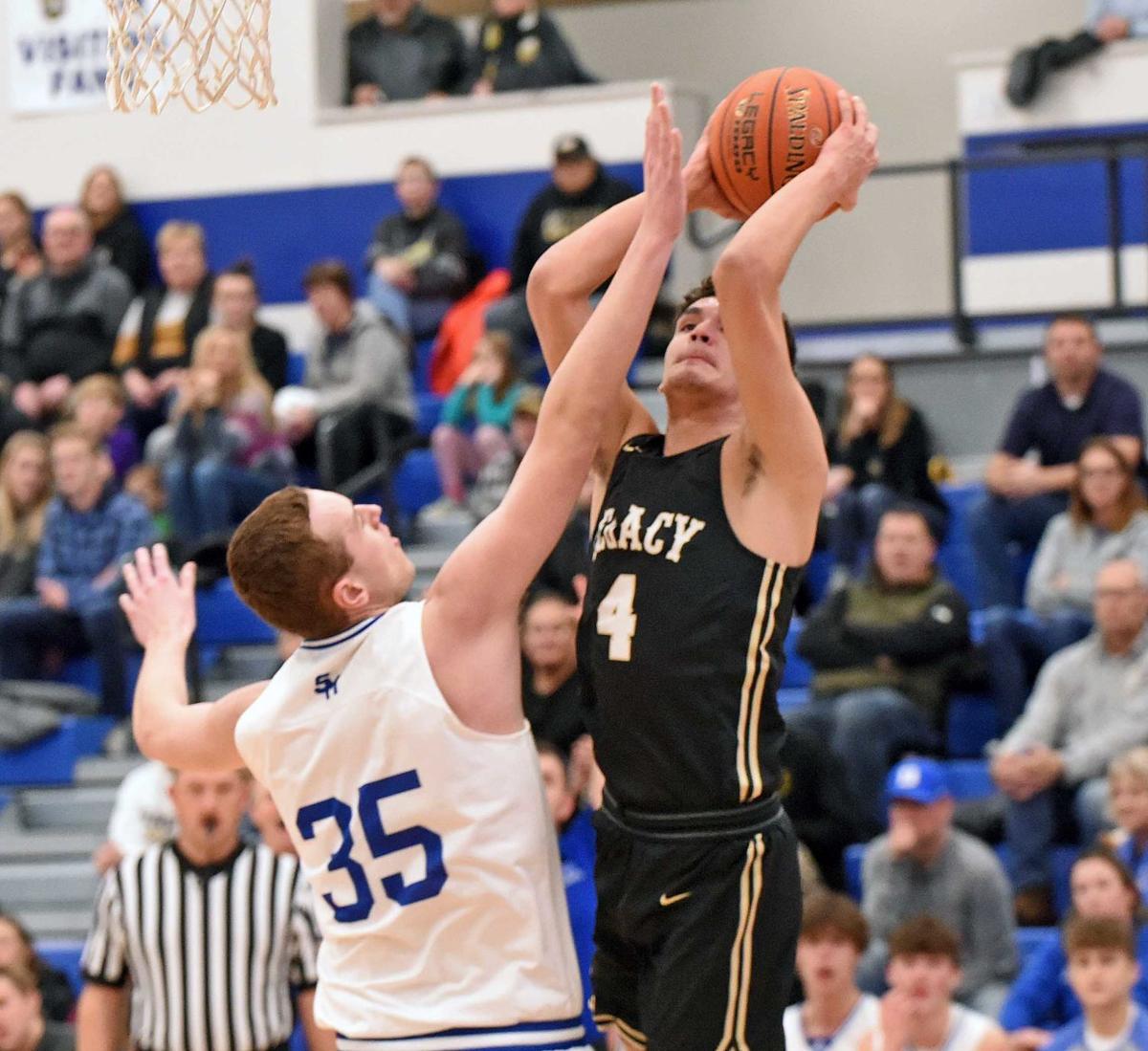 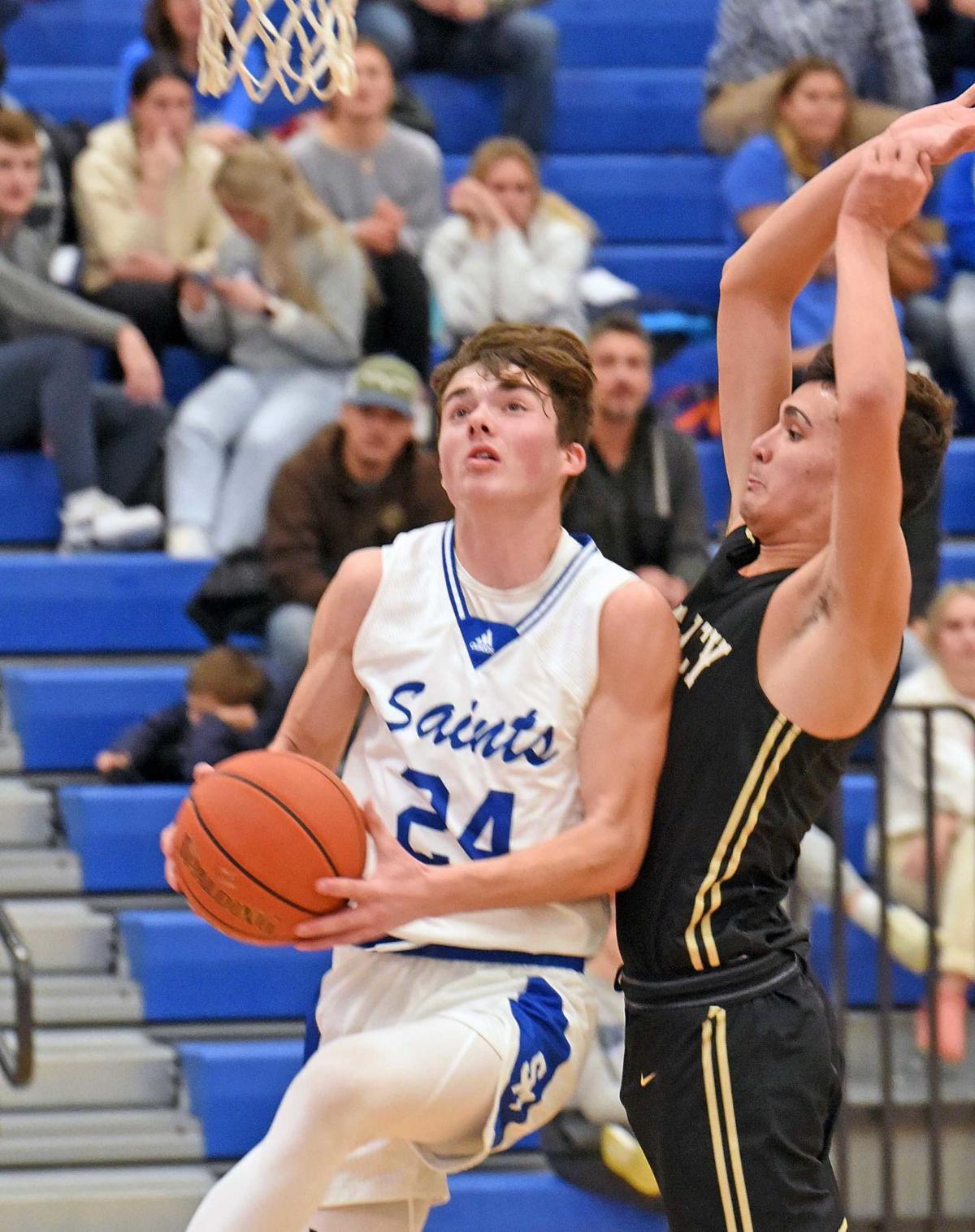 The 61 points for St. Mary's was a season-low, and a particularly precipitous drop from their 99-point outburst in a four-point loss to Bismarck High in St. Mary's final game before the holiday break.

Sabers head coach Jason Horner credited his defense and several excellent practices leading into the game for their performance.

"You never feel comfortable with a team that talented," he said. "Making our free throws would have helped a little bit, but I was proud of our defensive effort. We had three really good practices after our disappointing loss up in Turtle Mountain.

"It was great how the kids responded. We told them in the locker room before the game to be confident in the preparation and hard work they put in to get ready for this game."

It was not a particularly hot shooting night for either club. Both teams shot 40 percent from the floor, with Legacy making 25 of their 62 attempts and St. Mary's making 22 of their 54.

But when offense isn't always there, defense can lead to a win, and that's precisely what the Sabers got Tuesday.

"You're never going to do anything perfect against a team like St. Mary's," Horner said. "But we frustrated them for a majority of the game."

Logan Wetzel was a particular menace for the Sabers defensively. The senior forward had a half-dozen blocks and had six rebounds to go with his 11 points on the evening. Glenn was also active defensively, putting plenty of pressure on St. Mary's interior scoring options and keeping the Saints' Ben Morman contained.

Legacy was boosted by the absence of St. Mary's second-leading scorer Evan Gross, who was averaging 18.3 points per game but did not play Tuesday.

"We tried to do a few things to get post touches," Horner said. "When we go with our small lineups, we like to space our guys out and we predicate our offense on passing, cutting, creating gaps and attacking off the dribble."

The two teams combined to commit just 10 fouls in the first half, and a fast-moving opening 18 minutes saw the Sabers grab an immediate lead with a 6-2 run, and close out with a 35-28 lead on the Saints.

"I'm proud of us holding that lead through the first half," Horner said. "We've had games where we've had leads and melted."

A 9-3 run to open the second half gave Legacy separation it was unable to obtain in the first half, and the Sabers maintained a high single-digit, low double-digit lead for the first 12 minutes of the half.

"When (St. Mary's) made their runs, the kids didn't hang their heads and they focused on the next play, which is crucial in this league," Horner said. "Against a good team in a tough environment, I thought we maintained our composure well.

"We haven't seen that kind of (full-court) pressure this year. When you see something for the first time, you're going to be uncomfortable against it."

That lack of experience against a press defense led to a number of Legacy turnovers in the final six minutes of play, and a lead that pushed near 15 was down to six in a heartbeat.

"We have guys who are confident in making plays, but sometimes the easy play is the right play, not the home-run play," Horner said. "Getting into those kinds of situations, we're going to make mistakes, but we're learning as we go and we're going to keep getting better."

But while their free throws weren't always dropping, Legacy got enough of them when it counted, and after St. Mary's came up empty on back-to-back possessions in the final minute of play, the Sabers were able to dribble out their fourth win of the year.

"We have to get confident in getting fouled and stepping up to the line and making free throws," Horner said. "That's going to get better as the year goes on too."

With Gross out of the lineup scoring-wise for the Saints, Nate Fedorchak stepped up and tied for the team lead with Garrett Bader by pounding in 18 points. Easton Hinnenkamp had a quiet 12 points for the fallen Saints, and Landon Gerving had seven.

"We're athletic and have a little length and size, but when you don't let the ball go the way they want to go, that makes a big difference," Horner said. "We were giving up too many middle attacks and things like that. We're doing a better job of rotating out to shooters and keeping balls on one side of the floor."

Horner's squad now looks ahead to a late home game Friday against Mandan, while St. Mary's preps for a home game against Century.

"I'm focused on Mandan," he said. "I don't like to think too far ahead. I'll start watching and preparing for Mandan."