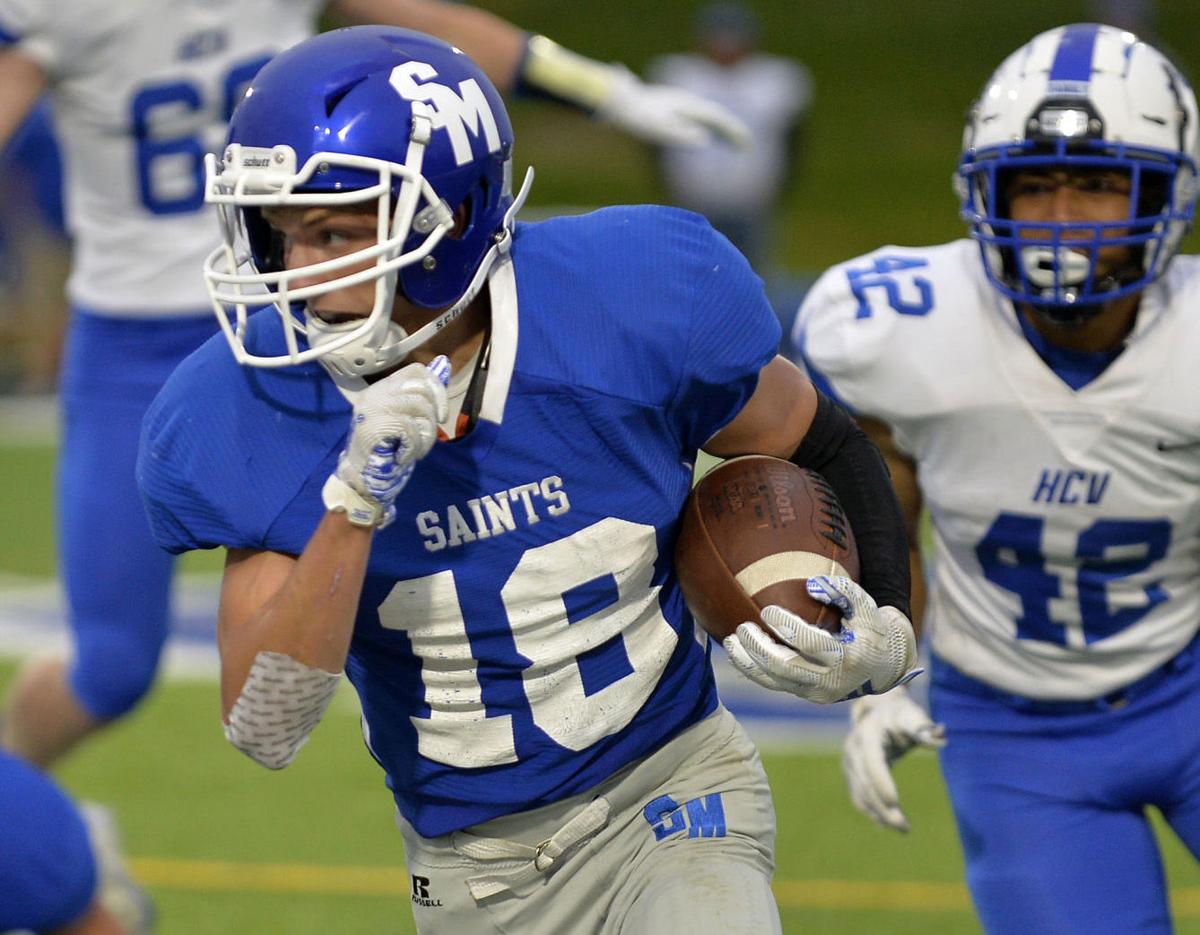 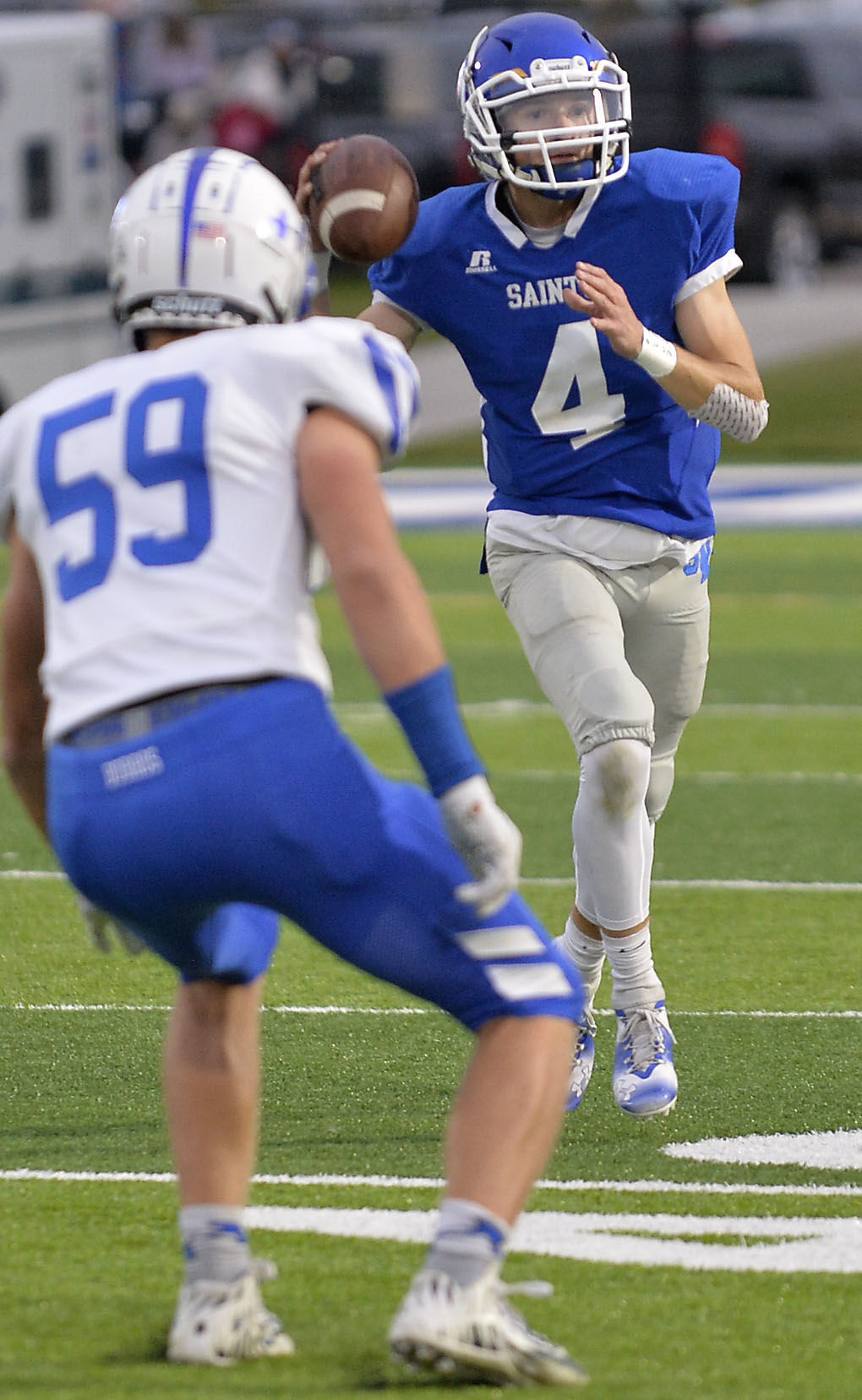 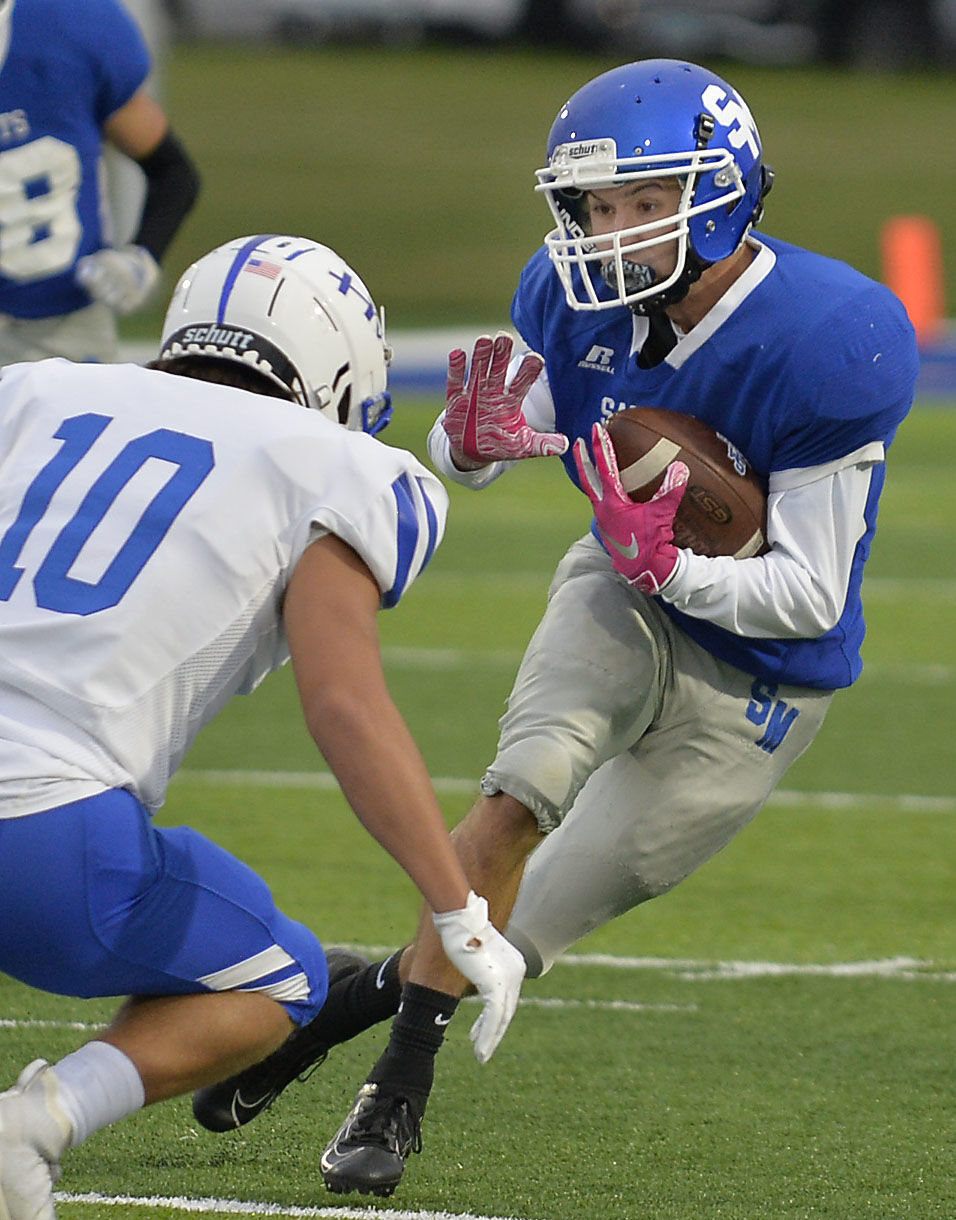 Jackson Roerick carries the ball for St. Mary's during Friday night's game. At left is Riley Olsen of Hillsboro-Central Valley.

It took St. Mary’s running back Cullen Curl a few reps to get a handle on the ball and become more than Hillsboro-Central Valley could handle Friday in a matchup of top-ranked teams in Class AA football.

Once Curl put the early dropsies behind him, the senior carved up the third-ranked Burros, leading No. 1-ranked St. Mary’s to a 14-0 win at Smrekar Field.

“It was mostly me dropping the ball,” Curl said of a scoreless first half. “They’re a physical team and they were pounding me there and stripping the ball. You just have to have a short memory.”

Curl fumbled four times in the first half, losing two. As a team, St. Mary’s dropped the ball six times.

Curl made amends, rushing 30 times for 146 yards and a 1-yard touchdown run that sealed the deal in the fourth quarter. He was part of a three-pronged attack that wore down the defending state champions.

Jackson Uhler completed 8 of 11 passes for 97 yards and a 33-yard TD pass to Britt Senftner that broke a scoreless tie in the third quarter.

And the Saints defense was rock solid with the exception of one 54-yard drive that ended at the Saints’ 22. Throw that out and the Burros had just 33 total yards of offense.

“It was an old-fashioned football game with teams playing defense,” St. Mary’s coach Dan Smrekar said. “The kids are starting to enjoy the physical part of defense. I’m very pleased with the physicality we played with.”

After two losses last season to the Burros on sloppy, wet fields in Hillsboro, the Saints wanted a shot at them on a good field, in good conditions. They  got that on Friday.

It’s hard to say the regular-season game made amends for last year’s two losses to the Burros, the second in the state semifinals. But Curl was happy.

“It felt great,” Curl said. “Obviously it felt good to beat them. They’re a great team. It was fun to get redemption.”

Defense was the name of the game from the outset. The Burros went three-and-out on their first possession and St. Mary’s followed with the first of its five first-half fumbles, giving the ball back.

But HCV did nothing with the ball. It managed just 14 total yards and one first down in the first half; three for the game.

St. Mary’s had the best scoring chances, but Nick Schumacher missed a 36-yard field goal in the first quarter and the half ended when Jace Leshuk broke up a Schumacher pass in the end zone as time ran out in the half.

The Saints and Curl took over in the second half, taking the kickoff and marching 76 yards in nine plays for the go-ahead score. Uhler engineered the drive, completing four of four passes, including a 33-yard strike to Senftner over the middle for a score on third down. Schumacher’s kick made it 7-0 with 6:45 left in the third quarter.

Curl capped the night with a fourth-down TD run with 4:49 left in the game. He carried six times on the nine-play, 41-yard drive. Despite the early miscues, Smrekar kept going back to his workhorse.

“We turned the ball over and we made some mistakes but the kids hung in there,” Smrekar said. “Offensively we moved the ball. Our backs are good and we’ll play through it and they’ll get better for it.”

No. 1-ranked Kidder County off to fast start but not satisfied

Kidder County football coach Dave Silbernagel is not grading on the curve.

No. 2 Beulah rolling ahead with defending state champs Hillsboro-CV up next

The last time the Beulah Miners squared off with the Hillsboro-Central Valley Burros, a state title was on the line.

Shiloh looks ahead after getting forfeit victory on Friday

Funnon Barker was at a football game Friday night, just not the one he planned to be at.

Demons roll past Dickinson, improve to 2-0

The Demon offense played a whole game and the defense was there in the second half.

Jackson Roerick carries the ball for St. Mary's during Friday night's game. At left is Riley Olsen of Hillsboro-Central Valley.