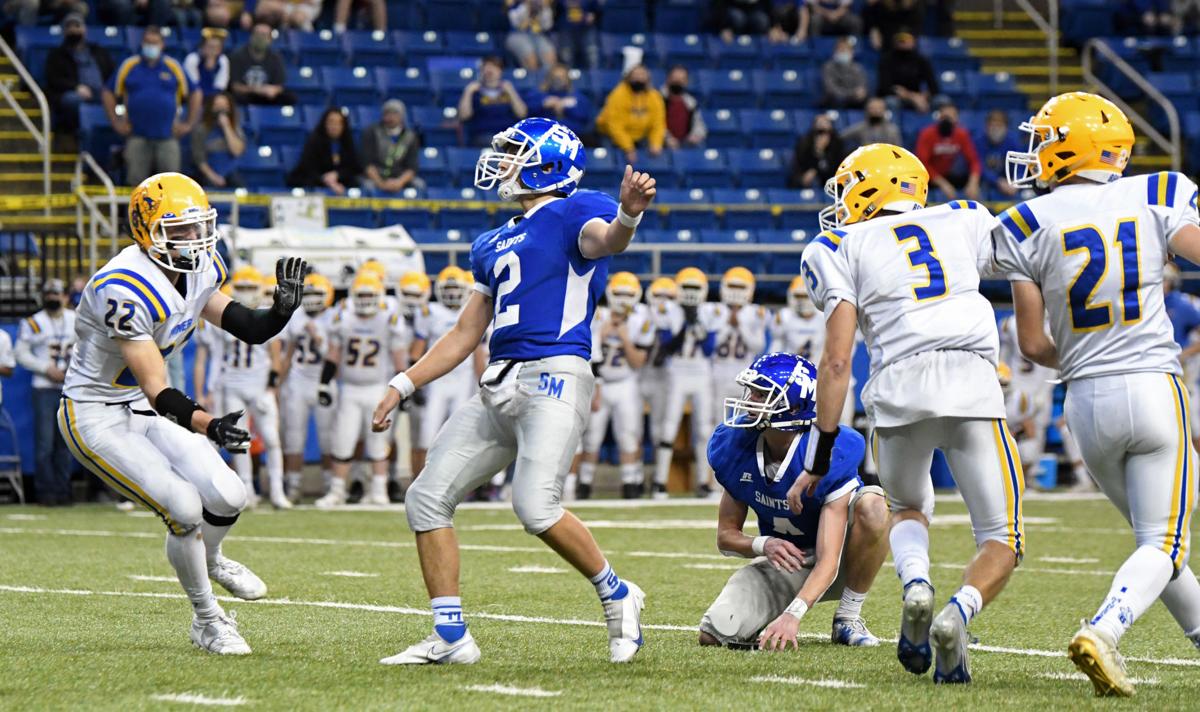 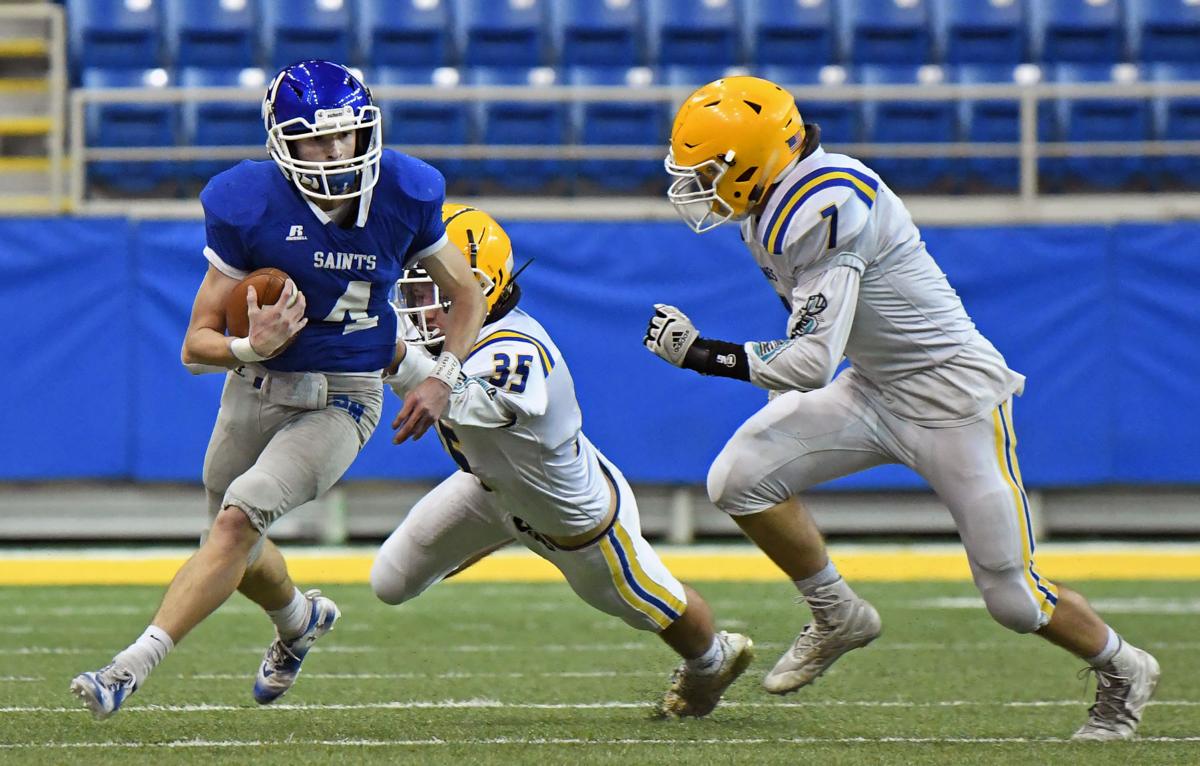 FARGO -- Defense has been St. Mary's calling card all season.

Friday at the Dakota Bowl, special teams sealed a Class AA state championship for the Saints.

Nick Schumacher split the uprights with a go-ahead 19-yard field goal with 15 seconds left in the game and then the Saints padded the lead. St. Mary's  returned a fumble for a touchdown on the ensuing kickoff for a hard-fought 17-7 win over Beulah at the Fargodome.

"We kind of messed up the first field goal earlier in the game, but we had confidence in our practice and preparation that we could do it," Schumacher said. "Obviously a little nervous there, but we corrected our mistake and made the one that counted."

Schumacher's kick capped a 20-play drive for the Saints, who started at their own 15-yard line. Saints quarterback Jackson Uhler engineered the 7-minute march, running for 46 of his 92 yards.

"Everything on the line there and we knew we had to do it," Uhler said of the 83-yard drive. "Beulah is a tough team. We didn't want to give the ball back to them so we had to keep the ball and get points. It was a long drive, a really tough drive, but credit Nick. He nailed that kick for a state championship."

All of the game's 10 second-half points came in the final 18 seconds.

After Schumacher's kick, Beulah tried a gadget play on the St. Mary's kickoff. But Beulah's Trey Brandt overshot Nathan Battest on a throwback. The ball hopped perfectly to Isaac Vandal who scooped it up and scored from 10 yards out for the game's final 10-point margin and the Saints' perfect 11-0 season.

"Boy, what a terrific high school football game between two great teams," said St. Mary's head coach Dan Smrekar. "Beulah played so tough, so physical. Give their kids and coaches a tremendous amount of credit. We're really proud of our kids. They played with a lot of heart, a lot of grit. It took everything we had today."

St. Mary's, allowing less than 4 points per game on average, held Beulah to 113 yards of offense, all on the ground.

"Our defense, I thought, played really well. We didn't allow big plays and against them, that's not easy to do," Smrekar said. "It was just a tough, tough football and you know what, it was for a state championship, that's the way it should be."

Beulah, playing in its second straight Dakota Bowl, went down fighting. The Miners had the Saints in a fourth-and-eight situation on the final drive, but Uhler found room up the right sideline for a 10-yard run to extend the drive. Three plays later, Schumacher lofted the go-ahead kick.

"Nick made a strong, confident kick," Smrekar said. "What a finish."

Uhler ran for 92 yards and threw for 79 more, including a 31-yard scoring strike to Jackson Roerick in the first half.

Cullen Curl, who was named the Class AA Senior Athlete of the Year, earned 93 yards the hard way on 29 carries.

"I just thought it was a total team effort," Uhler said. "Cullen ran his heart out, like he always does. Our line worked so hard against a really good defense ... it was tough out there, but we were able to make a few big plays when we needed it."

Nathan Battest, Beulah's two-way standout at running back and cornerback, was proud of his team's effort.

"I can't imagine playing with any other team. I just love these guys," said Battest, who scored the Miners' lone touchdown. "We knew it was going to be a dogfight. St. Mary's is a great team, we just came up a couple plays short."

Each team had one long scoring drive in the first half.

After nine straight running plays, the Saints dialed up a deep shot to take the lead. On first down, Uhler found Roerick open up a hash mark. Uhler lofted a strike that hit Roerick in stride for a 31-yard touchdown connection. Roerick ran a double move to break free and Uhler had all day in the pocket to make the throw.

After forcing a Beulah 3-and-out, St. Mary's marched down the field on its next drive. The Saints possessed the ball for 14 plays, but this time the Miners held and got a break. After being stopped on fourth down, St. Mary's was flagged for a personal foul. The 15-yard infraction moved the ball out to the Beulah 44 yard line.

The Miners didn't waste it.

Beulah used up all but the last 43 seconds of the second quarter to go 11 plays, all runs. Nathan Battest barreled into the end zone from 1 yard out to make it 7-6. Elijah Barbot's PAT kick tied it 7-7 at halftime.

"For 47 minutes, I mean, we did everything we could to give ourselves a chance to win a state championship," Battest said. "The last 40 seconds or so, a couple things didn't go our way. But we left it all out there. We gave it everything we had."

The eye in the sky doesn't lie, as they say. And Antonio Brown knows all about surveillance cameras.

St. Mary’s defense has been dominant from the opening kickoff this season.

The Baltimore Ravens will face the Tennessee Titans without injured defensive linemen Calais Campbell and Brandon Williams, both of whom were placed on the inactive list Sunday for the rematch of last January’s AFC playoff game.