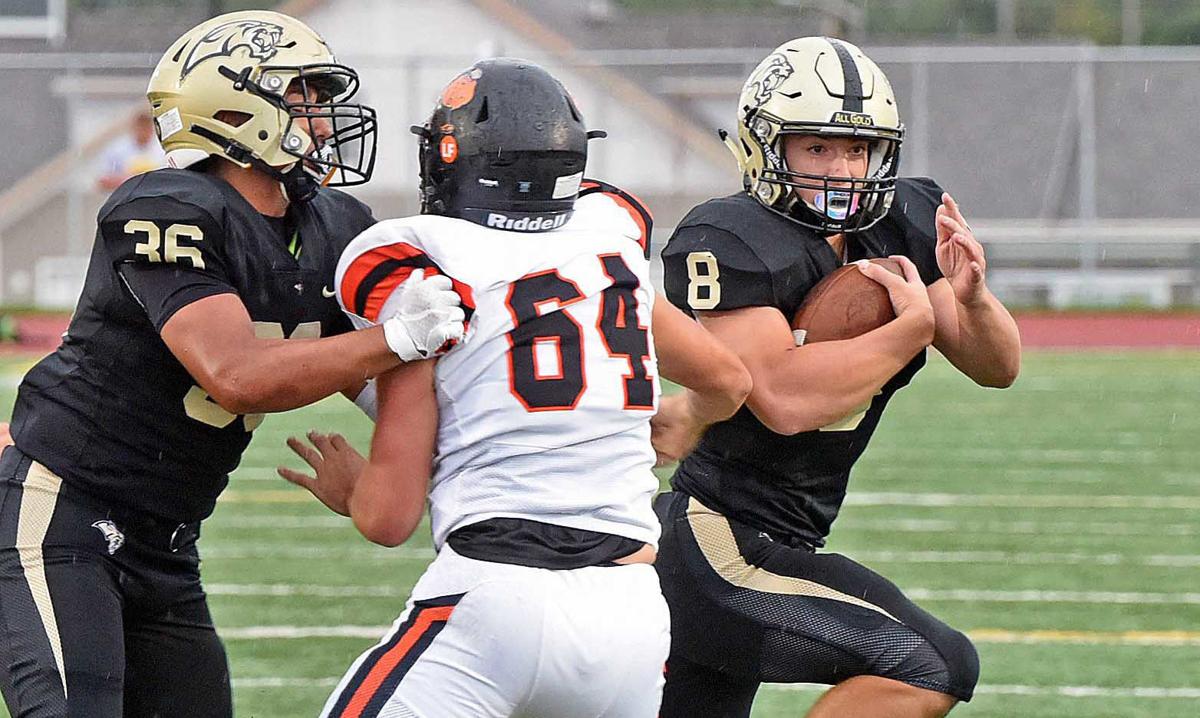 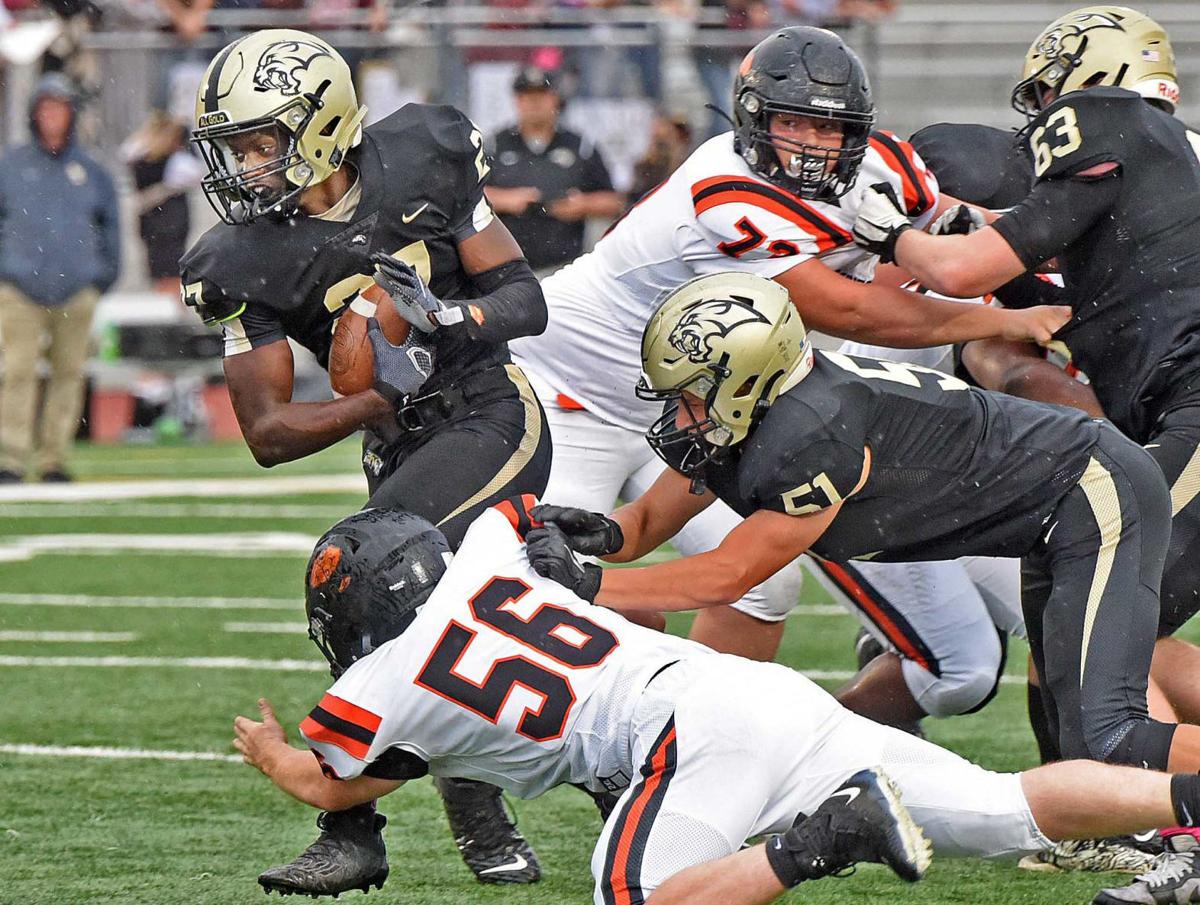 Legacy's Carl Henry gets a block from Alex Wetzstein (51) during Friday's game against Dickinson. 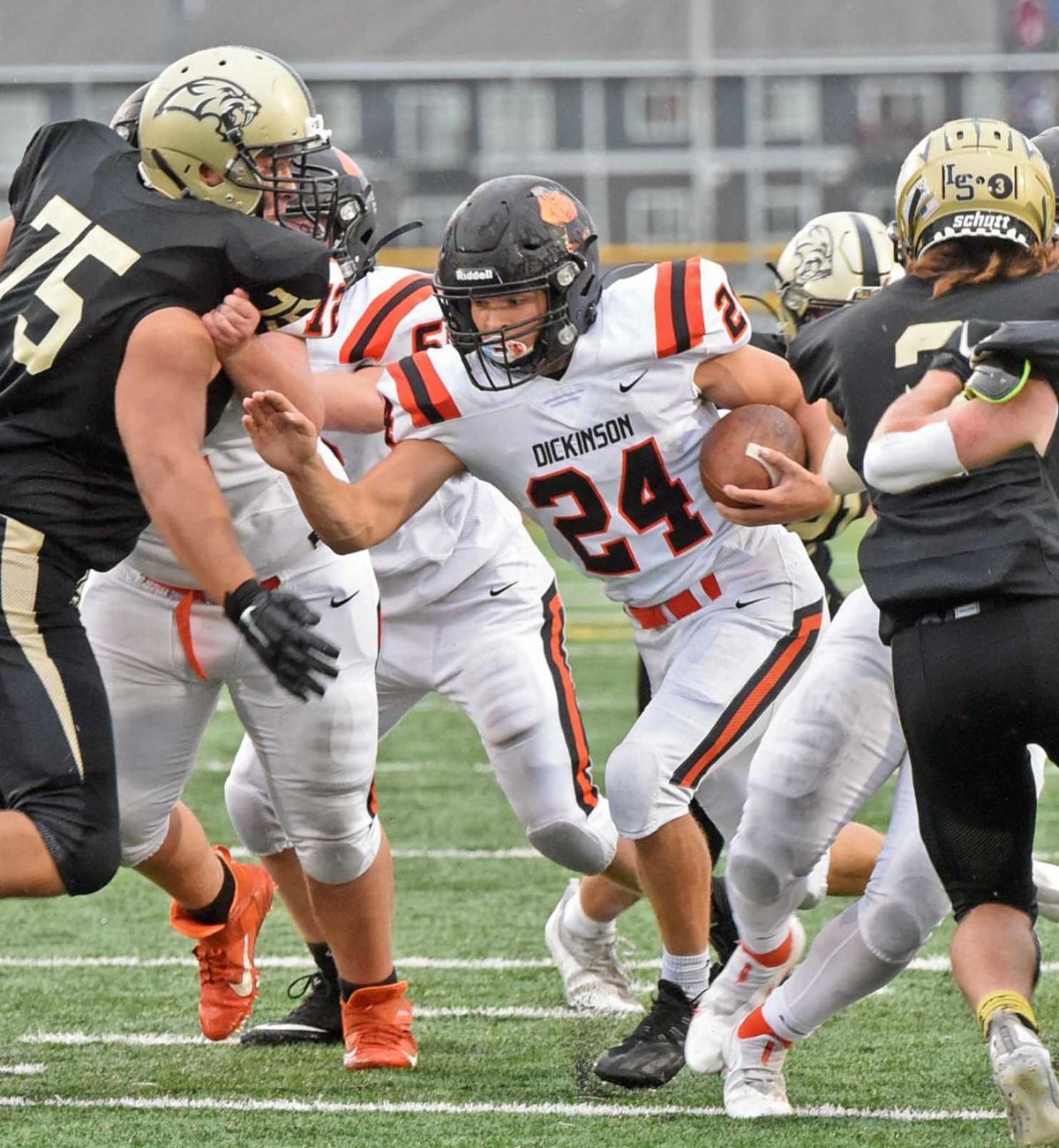 Dickinson's Troy Berg (24) tries to get past Legacy's Treyson Renken (75) during Friday's game.

Mission No. 1, according to Legacy senior Joey Buzalsky, was to open fast against Dickinson.

The Sabers accomplished that and a lot more, defeating Dickinson 31-0 in Western Dakota Association football at the Sanford Sports Complex.

"The object of the game was to show dominance form start to finish. In our first game (a 19-7 loss to Century) we had a slow start," Buzalsky said.

Legacy took care of that goal by scoring on its first two possessions.

The Sabers took the opening kickoff and marched 32 yards before bogging down at the Dickinson 21. Senior kicker Jack Byberg came on to salvage three points with a 38-yard field goal, and Legacy was ahead to stay.

Legacy forced a punt, which traveled just 18 yards, in Dickinson's first possession, giving the offense the ball at the Dickinson 49.

Five running plays, three of them by junior running back Carl Henry, carried the Sabers to paydirt on an 11-yard run by Henry.

That touchdown was erased by an illegal procedure call, so the Sabers did it over again, quarterback Logan Miller banging through the left side for a 16-yard scoring run. Byberg's kick gave Legacy a 10-0 lead at the end of the first period.

Miller, a 6-foot, 185-pound junior, scored the only TD of the second quarter, capping a 50-yard, 13-play drive, by scoring standing up on a 19-yard run. Senior quarterback Bryson Kelsch completed four passes for 46 yards during the drive, which consumed five minutes and four seconds.

Legacy scored a defensive touchdown on the first series of the second half. Dickinson's Cole Skabo, punting from his own 20, was thwarted by Legacy's Draken Stugelmeyer, who broke through for a block. Shaydon Auck caught the ball in mid-air and sped into the end zone for the third Saber touchdown. Byberg's kick made it 24-0 with 2:18 expired in the second half.

The Sabers scored the final points of the game with 2:28 to play in the third period. Kelsch connected with 220-pound senior tight end Keidan Klein, who bulled down the right sideline to complete a 30-yard play. Byberg was again on the money to make it 31-0 and implementing the running-clock rule.

Buzalsky said the victory was the tonic the Sabers needed after their opening loss.

"The team needed it. It was a very high confidence booster for our team," he said.

Buzalsky was all over the place, catching a 20-yard pass from Kelsch, garnering the only interception of the game in the first quarter and punting twice for an average of 44 yards.

"I only left the field on kickoffs and kickoff returns. Other than that I was in the whole game, and I love (all the minutes)," he said.

"I love receiving, but defense is really fun," he added. "You just get to be a dog out there."

Legacy piled up 278 yards and 14 first downs, running 45 plays. The Sabers held Dickinson to 167 yards and nine first downs on 41 snaps of the ball. Buzalsky's interception was the only turnover of the game.

Henry, a six-foot, 190-pound junior, was the game's leading ground-gainer with 73 yards in seven carries. He ran the ball just once after suffering an ankle injury in the first half.

Legacy, 1-1, returns to action next Friday in a AA clash at Fargo Davies. Dickinson, 0-2,  plays host to Fargo North in an A contest next Friday.

Can The New York Yankees cover the 1.5 spread?

Can The New York Yankees cover the 1.5 spread?

Will Florida's Anthony Richardson be ready vs. Alabama?

Will Florida's Anthony Richardson be ready vs. Alabama?

Idaho State has given the University of North Dakota football team problems over the years.

Inexperienced Braves must grow up fast

Legacy's Carl Henry gets a block from Alex Wetzstein (51) during Friday's game against Dickinson.

Dickinson's Troy Berg (24) tries to get past Legacy's Treyson Renken (75) during Friday's game.