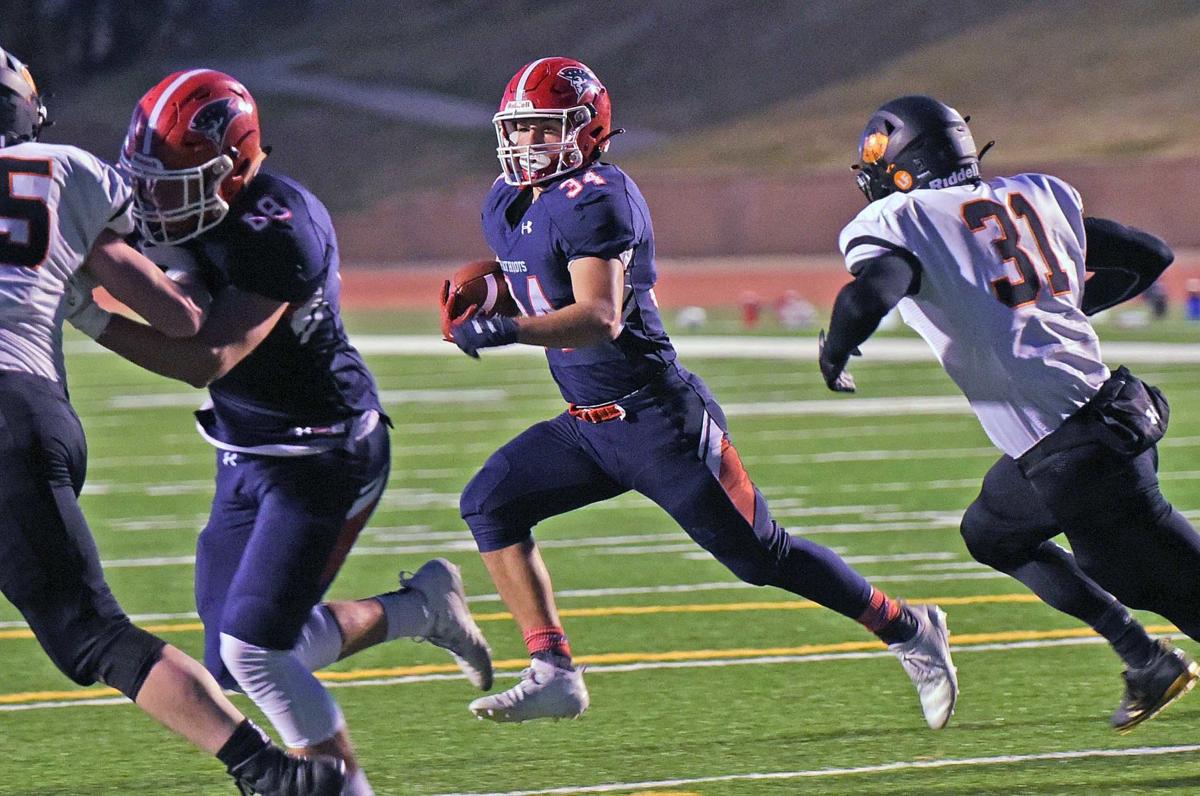 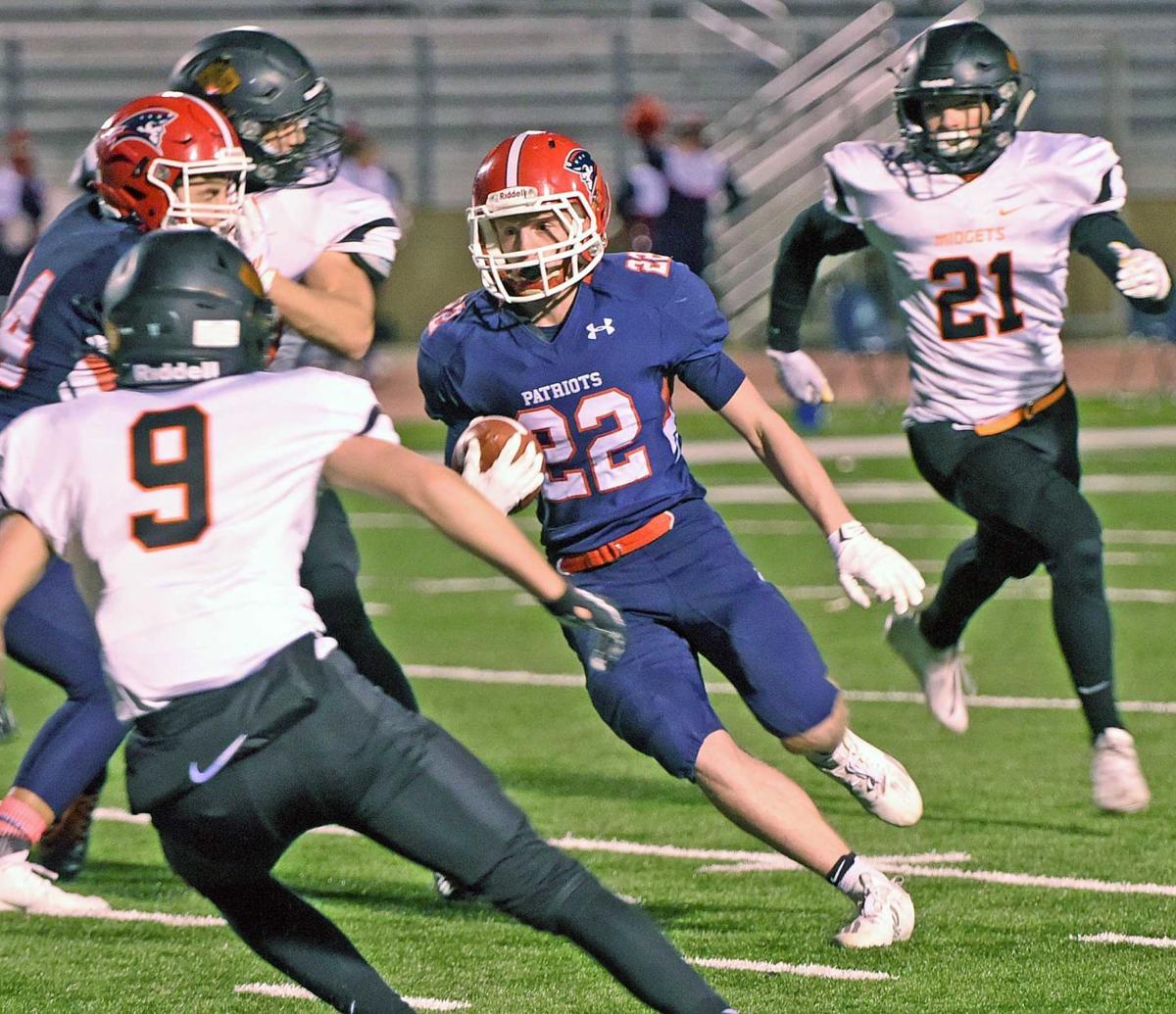 Century took command of three short-field situations to build a 28-0 lead en route to a 49-6 romp over Dickinson Thursday night.

Century scored on its first four possessions on drives of 17, 50, 38 and 25 yards to get the jump on the visiting Midgets.

A blocked punt on Dickinson’s first possession set the Patriots up at the Midget 17. Six plays later quarterback Noah Schaffner scored on a one-yard run.

Dickinson went three-and-out in its next series and Century took control at midfield.

Schaffner connected with wideout Brock Johnsen for 41 yards on first down, setting up up Schaffner’s sneak four plays later.

Century stuffed Dickinson on fourth-and-one at the Midget 38 on the Dickinson's third possession, and the Patriots were in business again. Two short completions by Schaffner to Cade Garcia, who bulled in from four yards out, producing a 21-0 CHS lead.

Johnsen intercepted a tipped ball and returned the ball to the Midget 25 to end Dickinson’s fourth series.

Schaffner’s 16-yard completion to Noah Frosland was the key play in a touchdown drive than required just four plays. Peyton Arndt finished it off with a one-yard run.

A two-yard scoring run by Garcia with 1:42 remaining in the second period enabled Century to take a 35-0 lead into the second half, which was played with a running clock.

“It all starts with our kicking game. Wade James just had an outstanding game. … He’s kind of dictated field position the last few weeks,” Wingenbach noted.

James is also an offensive weapon with 3-for-3 field goal accuracy and 27-for-28 marksmanship on extra points.

Wingenbach gave Garcia the night off after the tailback ran for 72 yards and two scores on 12 carries in the first half.

Reserves Peyton Arndt and Trevor Ragan kept up the momentum after intermission. Arndt, a sophomore, carried six times for 76 yards and two touchdowns, all in the second half. Likewise, Ragan, a junior, dashed for 65 yards and a TD on 14 carries after the break.

Dickinson avoided a shutout with 9:19 to play on a 25-yard sprint by Troy Berg. Berg’s dash capped an 87-yard drive, the Midgets’ only sustained march of the night.

Century ground out 293 total yards and logged 20 first downs. Dickinson garnered 13 first downs and 199 total yards. Century ran 46 plays to Dickinson’s 44. The Midgets were charged with the game’s only turnover.

The victory on the Bismarck State College campus ran the Patriot winning streak to 18 games. Century’s last setback was to Bismarck in the 2018 AAA state championship game.

Top-ranked Century and Bismarck, both 6-0, square off on Wednesday for first place in the West region on the line.

Wingenbach said Thursday’s effort indicates things are in order for next week’s showdown with BHS.

“We got our work done. Now we want to get home and stay healthy,” Wingenbach said. “We didn’t have (270-pound junior lineman) Lucas Schweigert tonight, but some other kids stepped up and did the job for us.”

Schweigert is sidelined with what Wingenbach labeled a sore knee.

During this unusual 2020 season, Century's results in the swimming pool remain up to the Patriots' lofty standards.

Legacy seniors go out with key win over Minot

Legacy's seniors got just one game on its true home field this season.

Century's array of hitters is either a thing of beauty to watch or a defensive nightmare.

Volleyball coaches call their sport a game of momentum for good reason. The good times come and the good times go, and seldom do they hang aro…

On its first possession, Bismarck marched down the field and scored a touchdown.

The West Region cross country meet had a little bit of everything for the Century Patriots.