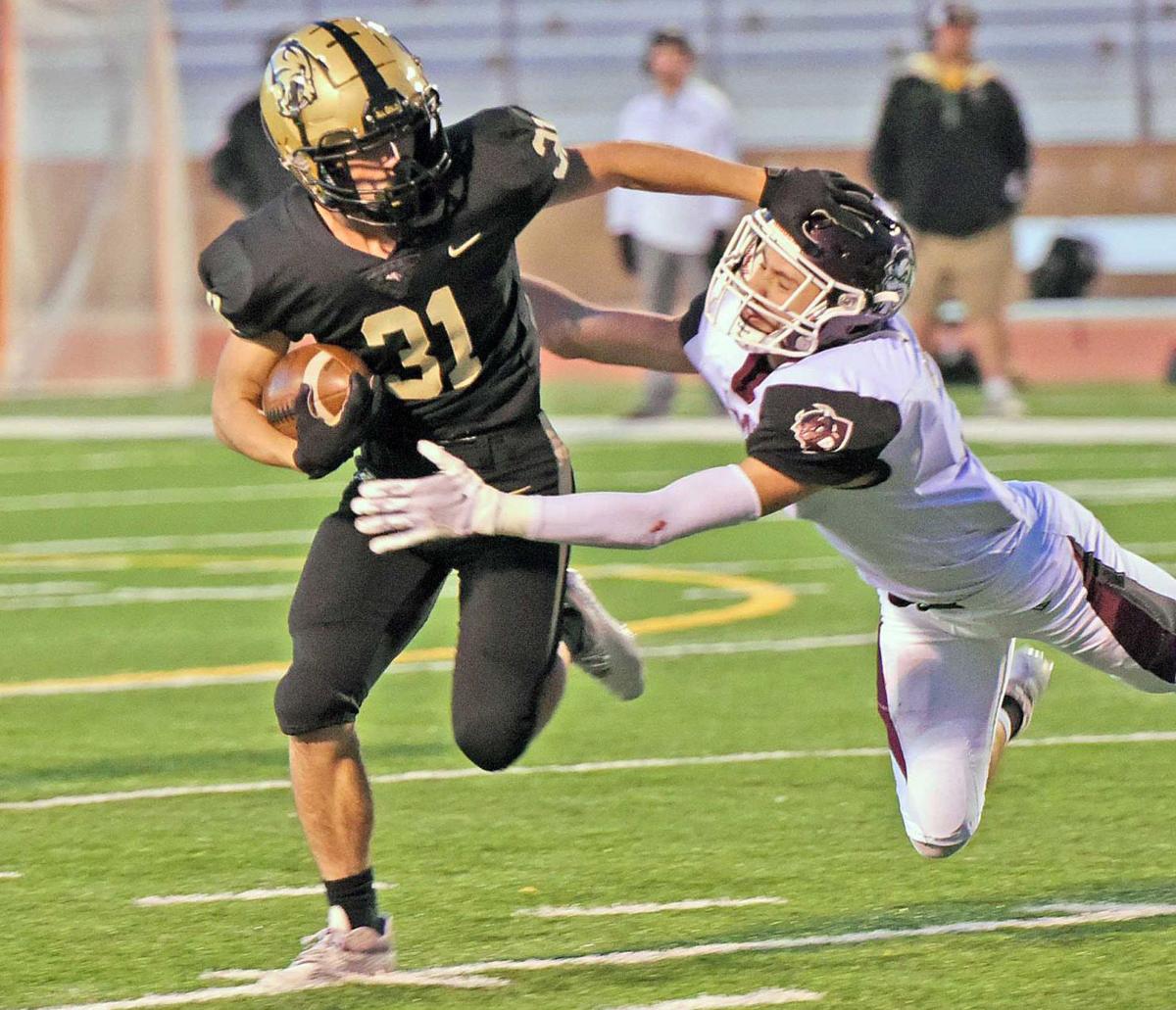 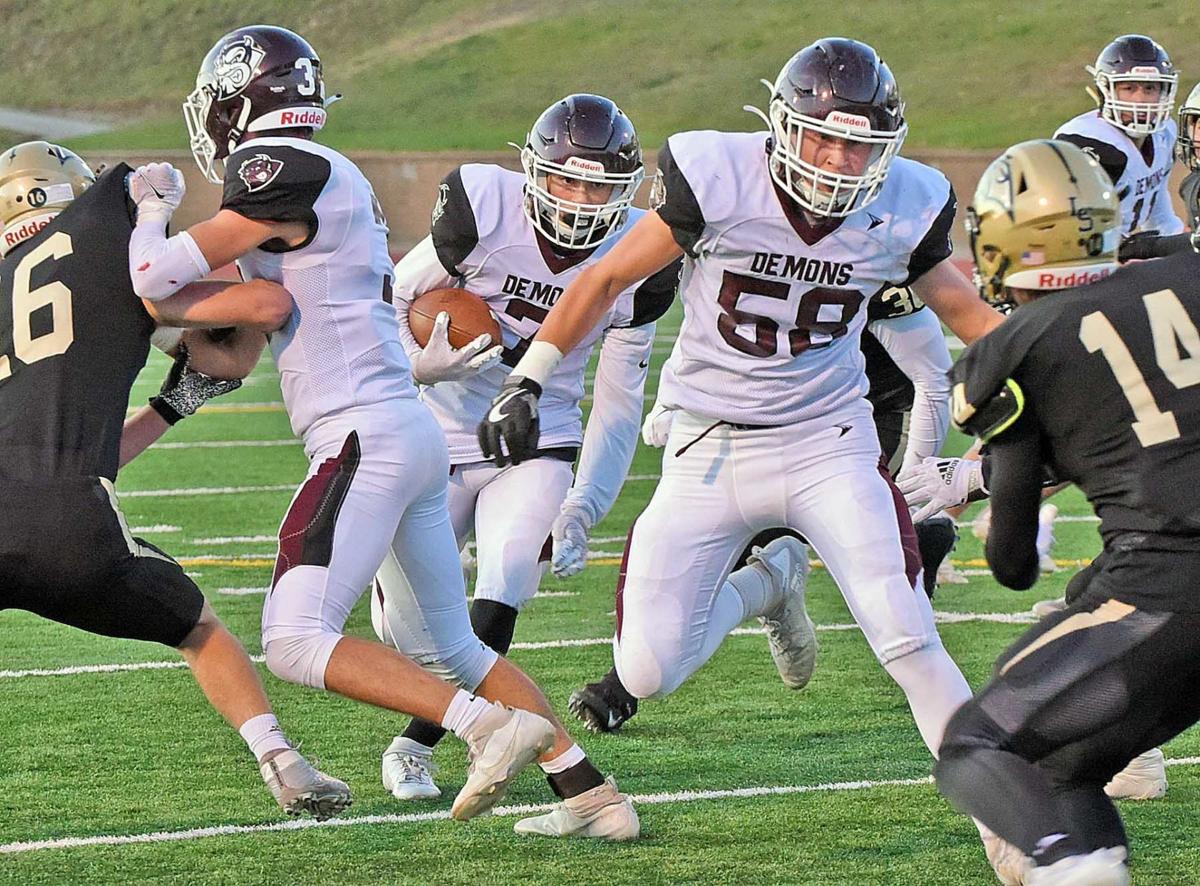 To hear Bismarck Legacy quarterback Logan Miller talk about Friday night’s Class AA West Region football game against Bismarck High School, the junior had nothing to do with the Sabers’ 38-22 win at MDU Resources Community Bowl.

“The team, they’re outstanding,” Miller said. “I could not do it without my line and my running backs."

Yeah, but what about the 177 yards rushing and three running touchdowns? How about the 153 yards passing and another TD?

“The routes of my receivers, they give me great opportunities to do stuff,” Miller added. “I did what I could because of my team.”

OK, Miller had nothing to do with the win that kept the Sabers firmly entrenched in second place in the region with one game remaining before the playoffs begin.

In reality, Miller and running back Carl Henry were virtually unstoppable.

“You want to trust the ball in the hands of your athletes to make plays and obviously he had a good game. And (Henry) had a good game,” Legacy coach Chris Clements said. “We’re starting to find our way and getting better as we go.”

Clements said it was the first game this season in which the Sabers’ quarterback and running back rushed for more than 100 yards. Henry had 129 yards on 22 carries. The Sabers ran for 336 yards against the Demons, who need to beat Williston on Wednesday to clinch a playoff berth. The top five teams in the west and top three in the east make the playoffs under the state’s new setup.

The Sabers opened with two long scoring plays and followed that with a long scoring drive to take a 24-15 lead into halftime.

Henry’s burst for 44 yards right up the middle and down the left sideline on the fourth play of the game put the Sabers on the scoreboard first. Jack Byberg’s PAT with 10:06 left in the first quarter gave Legacy a 7-0 lead.

But the Demons needed just three plays to answer when quarterback Caden Fischer ran a keeper right up the middle and split the secondary, going untouched 76 yards for a TD. Ethan Stotz’s kick tied it at 7-7 just 59 seconds after the opening TD.

Fischer finished the night with 125 yards rushing and a touchdown. He also completed 12 or 22 passes for 175 yards and a score.

Legacy took over after the Demons’ kickoff on its own 20 and worked up the field predominantly on the ground. On third-and-4 from its own 38, Miller bobbled the shotgun snap just long enough for a big hole to open right in the middle of the field and he dashed through it untouched for a 17-7 lead with 4:45 left in the opening quarter.

The Sabers’ next possession ended on a sack and fumble. Miller sidestepped the Demons’ Ethan Stewart, but Stewart turned around and hit Miller from behind causing a fumble that Bridger Owens recovered on the Legacy 20.

On the next play, Fischer tossed a 20-yard TD pass to Hudson Schroeder out of the backfield. And after Legacy was offsides on the PAT, the Demons’ Brock Fettig scored on a run for a 15-14 lead with 10:25 left in the first half.

Schroeder finished the night with 63 yards on the ground and 52 through the air.

Legacy responded on its next possession, marching in 15 plays from its own 34 to the BHS 6 before settling for a 22-yard Byberg field goal.

An ill-timed lost fumble by Fischer set up Legacy’s next touchdown, a 2-yard run by Miller with 18 seconds left in the half that made it 24-15.

The Demons would only get one more TD, that a Schroeder 9-yard run that cut the Sabers’ lead to 24-22 with 9:16 left in the third quarter.

Miller tossed an 18-yard TD pass to Wyatt Kraft and scored on a 52-yard run to close out the scoring.

Both Clements and Miller said there’s no chance Legacy is playing out the string and waiting for the postseason.

“We’re building. We’re not at the level we can be resting people,” Clements said. “We’re still going after it. We’re a work in progress.”

“We knew these last couple of games would be important,” Miller added. “We came in locked and ready for this game. We want to be the best we can be.”

University of Mary wide receiver Danny Kittner has been named the Northern Sun Intercollegiate Conference’s Offensive Player of the Year.

The West Fargo Packers defense even stymied their head coach.

How St. Louis is beating the NFL in court and may win billions after losing the Rams

The massive canopy rises from the Los Angeles landscape, providing cover for the spectacular stadium beneath it.

Patrick Mahomes and the Kansas City Chiefs are back in a familiar spot. Same for Bill Belichick and the New England Patriots.

Jason Garrett is out.

After missing the last four games, Zach Wilson will be back under center for the Jets against the Texans.

Weikum's an anchor in the trenches for St. Mary's

Ron Cook: What happened to players fighting their own battles?

The big news in Cleveland on Sunday was that Baker Mayfield failed to meet his mandatory media obligations after the Browns' dreary 13-10 win against the Detroit Lions.

Brad Biggs: As report of Matt Nagy’s imminent firing swirls, Bears leave their coach to fend for himself. Whether it’s after Thursday’s game or before Week 17, the end seems near.

According to popular lore, when the American humorist Mark Twain was asked about rumors that he was gravely ill, he replied, “The reports of my death are greatly exaggerated.”