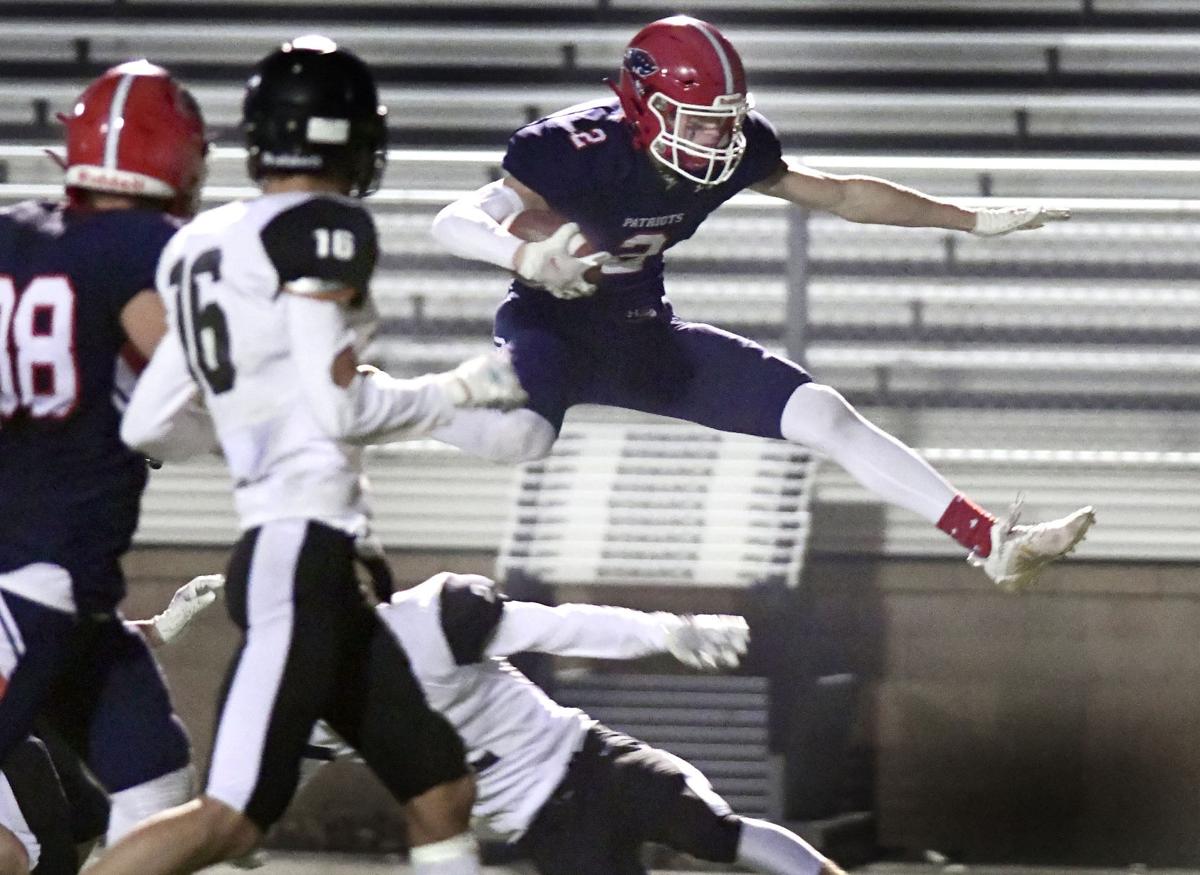 Century wide receiver Brock Johnsen hurdles a Mandan defender on his way to score a touchdown during the fourth quarter of Friday night's Cass AAA semifinal game at the MDU Resources Community Bowl. 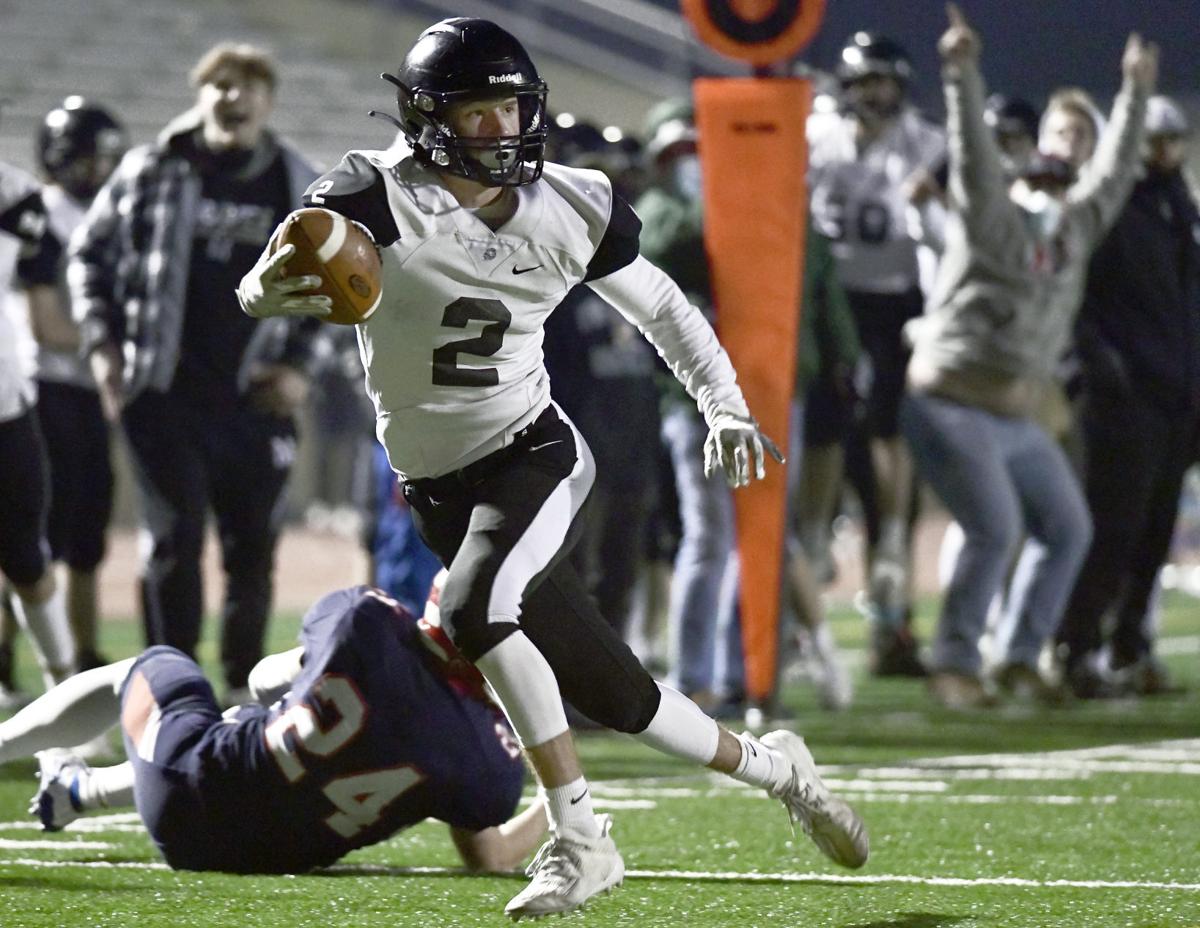 Mandan wide receiver Tyler Thilmony crosses the goal line to score a touchdown during the second half of Friday night's Class AAA semifinal game at the MDU Resources Community Bowl.

Century's 21st straight victory sends the Patriots to the Fargdome on Friday in a rematch of last season's championship game against West Fargo Sheyenne. The Patriots are surging into the title game with 94 points combined in their two playoff victories.

The fifth of Century's six touchdowns will be the one the limited crowd will remember. Johnsen took an on-target pass from quarterback Noah Schaffner around the 20 yard line, made one defender miss with an ankle-breaking cut on a dime, but it paled in comparison to the second move. The speedy, 6-froot-4 Johnsen raced toward the end zone and hurdled a second player and landed in the end zone for a touchdown.

"So I turned around after a great pass from Noah, I made a move on the first defender and as I'm coming up on the second defender I'm like, 'If he goes low, I'm going up.' He went low so I went up and, yeah, I went for the hurdle and it worked out," Johnsen said. "It was cool, but what's even better is that we got the win."

Hurdling is nothing new for Johnsen. He took second in the 110 hurdles at the state meet as a sophomore in 2018. Last year's state meet, of course, was canceled.

"I'm a hurdler, so I had to show that off a little bit," Johnsen said. "Luckily, it worked out."

It was another impressive performance for Century, which amassed 391 yards of offense in the game. Schaffner threw for 173 yards and ran for 80 more in a strong performance for the senior QB.

"I think a big part of it is confidence, not just for Noah, but for all our kids. We've gotten better and showed steady improvement," Century coach Ron Wingenbach said. "We're proud of the kids. They've put themselves in position to do something special."

Mandan could not have started the game any better. After a penalty on the opening kickoff of the game, the Braves found themselves pinned back on their own 5 yard line. But senior quarterback Jayce Lowman engineered a 19-play touchdown drive, capped by a 12-yard TD pass to tight end Aaron Grubb. Lowman threw for 247 yards and three touchdowns in the game. Treys Tietz caught 10 passes for 116 yards.

"Boy I tell you, Lowman played really well," Wingenbach said. "It wasn't like we were leaving kids wide open. He had to make some tough throws and he did."

Century's defense stiffened. The Patriots scored the next 24 points.

"That first drive for us was a great drive," Mandan coach Todd Sheldon said. "They're so good up front, we came out with the mindset that we were probably going to have to throw it 40 times."

Forty-eight, in fact. Lowman completed 26 of them, including touchdown passes to Aaron Grubb, Tyler Thilmony and Anthony Johnson -- all seniors.

"Our seniors, I tell you want, that's an impressive group," Sheldon said. "Most of them, they got one shot at it, just this year, their senior year and they made the most of it. They got us to the semifinals. We just ran into a great team tonight. We're really proud of our kids."

Century has a talented senior class as well. Cade Garcia, the Patriots' powerful tailback, ran for 93 yards on just 15 carries and a 1-yard touchdown on the Patriots' first drive of the second half.

"Brock's a talented kid. He's got that kind of stuff in him," Wingenbach said. "Noah, I thought, played really well. Ian (Ely), Jacob Renz and of course Brock made some plays tonight. That was good to see."

Century added a defensive touchdown for good measure. Andrew Leingang lowered the boom on Lowman for a sack near the goal line and Jacob Burckhard flopped on the fumble.

Century's making things look easy of late, but it is not.

"We have all the respect in the world for Mandan," Johnsen said. "They got so many great players. We knew we'd have to bring our 'A' game tonight. Our goal was to get back to the Dome. We’re there and now we just have to finish it off against another great team."

Century made fall 2020 a season of championships

For many, 2020 will not be remembered fondly.

Jeffrey Lurie is the only person who can fix the Eagles. Fixing his front office should be his top priority.

Good news is, you aren't the only one who can't stomach the Eagles. The guy who signs their checks is apparently tired of them too.

The Thanksgiving night game between the Ravens and Steelers has been switched to Sunday because of coronavirus issues with Baltimore.

Century wide receiver Brock Johnsen hurdles a Mandan defender on his way to score a touchdown during the fourth quarter of Friday night's Cass AAA semifinal game at the MDU Resources Community Bowl.

Mandan wide receiver Tyler Thilmony crosses the goal line to score a touchdown during the second half of Friday night's Class AAA semifinal game at the MDU Resources Community Bowl.