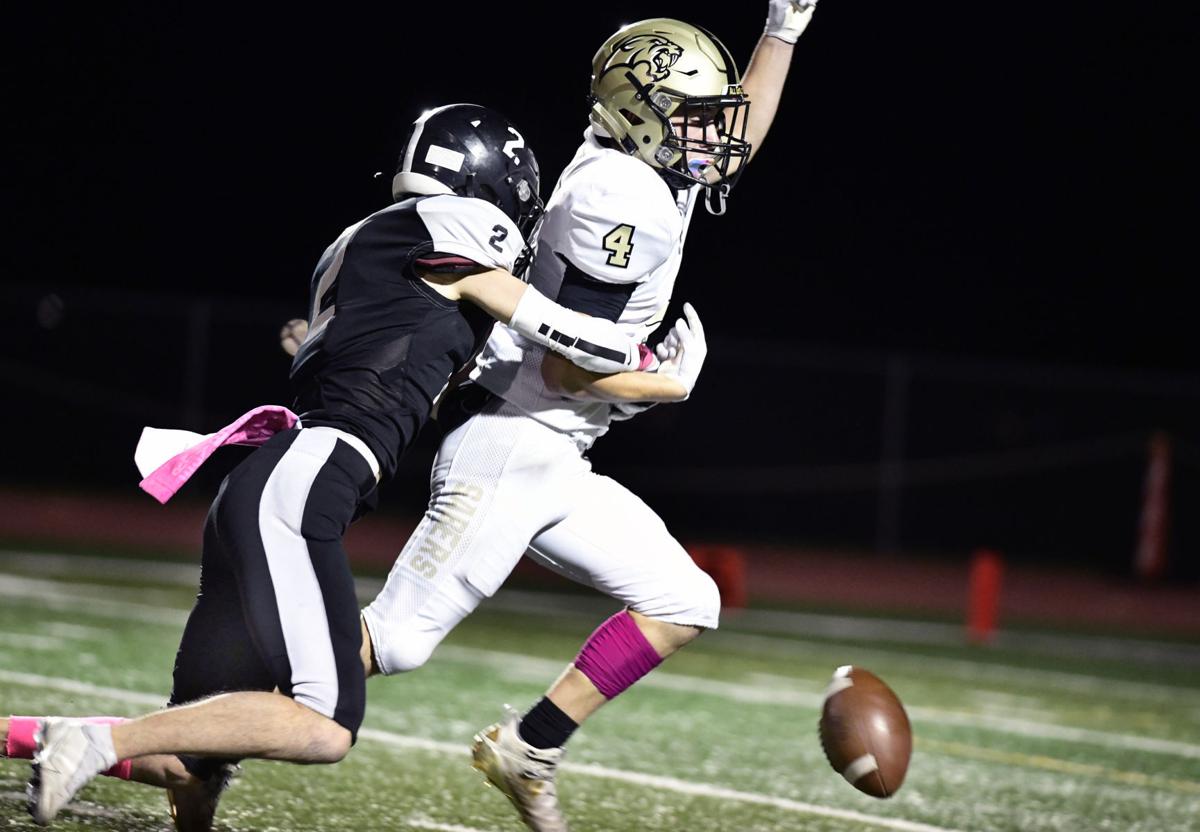 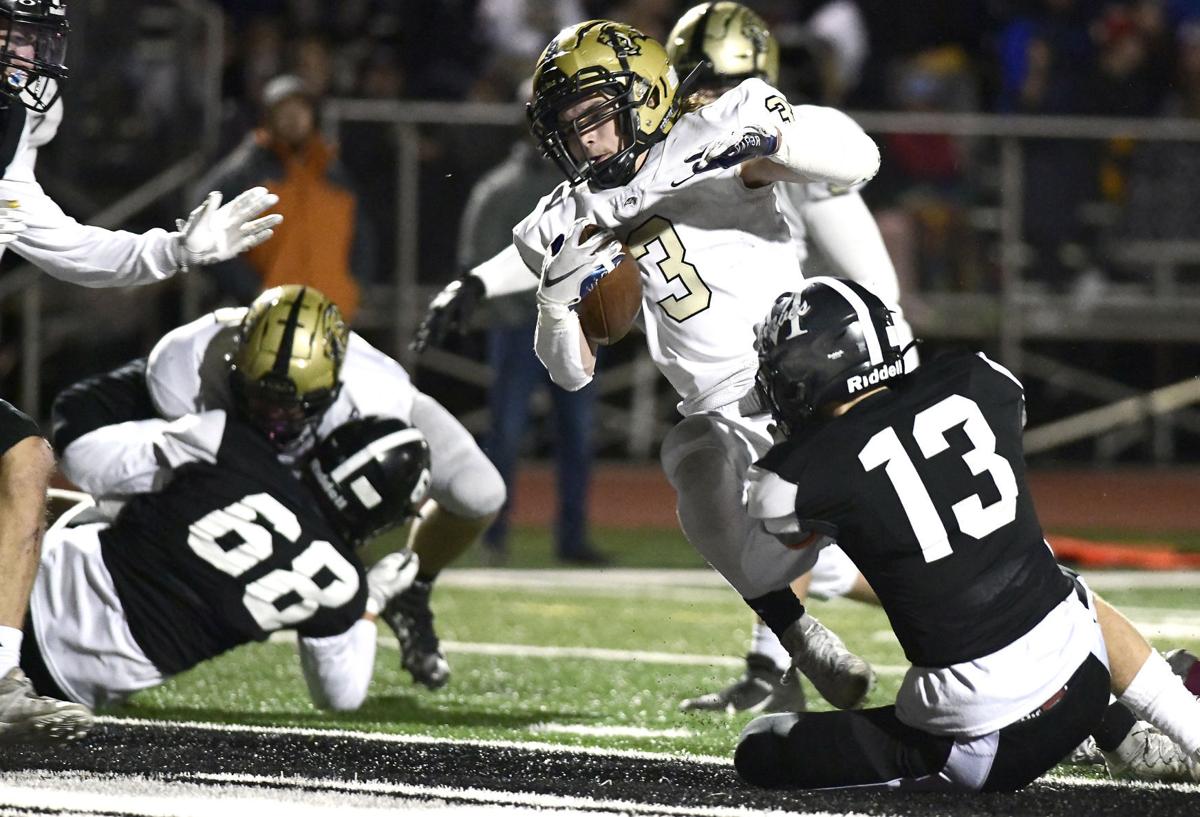 Legacy running back Weston Snyder (3) crosses the goal line for a touchdown before Mandan's Devon Church (13) can make the tackle.

Both teams will be on the road next week for the playoffs, but the Braves will head into the postseason with the momentum of a come-from-behind win.

Lincon Wiseman ran for 230 yards and two touchdowns and Karsyn Jablonski had 170 receiving yards, two touchdown catches, an interception and a game-saving forced fumble as Mandan rallied for a 32-28 win over the Sabers.

Legacy led 28-14 at halftime and was forced to play the second half without standout tailback Carl Henry, who was injured late in the second quarter.

The win means the Braves finished second in the West, Legacy third. Both teams went 3-2 in conference play and 4-5 overall. All five of Mandan's losses were by a touchdown or less.

"I think it gives us a lot of momentum, beating a good team like Legacy," said the speedster Jablonski. "We just have to keep this going in the playoffs."

The win will give the Braves one tangible advantage.

"I guess maybe the most notable thing is it gives you more all-conference players and a vote for all-state when you finish in the top three," Mandan coach Todd Sheldon said. "We've been in a lot of tight games like this. Certainly to get over the hump and win is a much better result for us."

The Braves have the necessary components to put together a playoff push. They did last year, advancing to the final four.

"I don't think our kids have grasped how good they are, even in their own minds," Sheldon said. "We've played Century close. West Fargo close. Those are top-notch teams and we were right there.

"I don't know if they fully believe how good they are. They kind of wait around for something to go wrong instead of making things go right."

The Braves did that for the final two quarters.

Two touchdown passes from Max Carlson to Jablonski, the first 33 yards and the second 35, along with a three-yard run from Wiseman, turned a 28-14 halftime deficit into an eventual 32-28 victory.

"I wasn't expecting anything near this level, but I thought I could play well," the junior Jablonski said. "It's always a team effort. Line does their job and we just have to make the plays."

Not having Henry clearly hindered the Sabers. In the first half alone, the Sabers' junior had 117 yards rushing on just 12 carries.

"Carl Henry is an insane running back," Jablonski said. "Having him not out there definitely helped us. Hopefully, he'll be OK."

The first touchdown for each team came on fourth down, although Legacy’s was less likely.

An interception by Brodie Sailer put the Sabers in prime field position at the Mandan 18-yard line. However, a bad snap and sack had Legacy pushed back to the 31-yard line.

On fourth-and-23, Sailer came up with another big play, making a diving grab in the end zone on a well-thrown ball by Miller to put the Sabers in front.

Mandan answered when Wiseman beat everyone to the edge and scored on a 12-yard TD run on fourth-and-2.

"Our pass blocking wasn't very good tonight, but we did block well in the run game and Lincon ran hard," Sheldon said.

The Braves got back even on a long scoring play of their own. Carlson’s throw appeared ready to be picked off, but the ball found its way through to Tahrye Frank for a 40-yard score. The Sabers marched right back down the field to take the lead. Weston Snyder capped a 10-play drive with a three-yard touchdown run.

"Karsyn gets a lot of attention, and he should, he's very good, but Tahrye Frank is an excellent receiver too," Sheldon said.

Legacy’s defense forced Mandan to punt on its next possession. Kraft took the kick and made several Mandan players miss and nearly scored, going all the way to the Braves’ 10. On the next play, Snyder carried a tackler into the end zone to make it 27-14.

The Braves wasted little time starting the second half scoring.

Wiseman broke off a 64-yard run on the second play of the half. The junior tailback finished it off with a three-yard run to make it 28-20. After a penalty on the PAT kick, the Braves opted to go for two. Wiseman appeared to get in, but was ruled short.

After a Legacy punt, Wiseman sprinted for 28 yards deep into Sabers territory. The drive stalled, though, setting up fourth-and-10 at the Legacy 33-yard line. The Braves popped another big play on a perfectly thrown ball from Carlson to Jablonski for a 33-yard touchdown. The Braves again went for two, but Carlson was sacked and stripped.

Driving on its last possession of the third quarter, the Sabers fumbled it away.

After the Braves flopped on it, the home team sprinted down the field again, taking the lead on a second-down touchdown pass to Jablonski, who was wide open. The score covered 35 yards to make it 32-28 Braves. Mandan again went for two, but the throw to Frank was low and not caught.

Legacy appeared ready to tie, or come close, on its next possession. Kraft caught a slant from Miller and took it toward the Mandan red zone. But Jablonski raked the ball free, rolled all the way into the end zone and the Braves jumped on it.

"We made some adjustments in the second half defensively. We rotated a bunch of kids in to keep them all fresh," Sheldon said. "But obviously them losing their tailback was a big blow. The kid's very good."

With five minutes left, Legacy got the ball again, but Jablonski was in perfect position on an overthrow by Miller and hauled in the interception. The Braves churned out two first downs on the ground to end it.

"It feels good to get this win," Jablonski said. "I think it's a confidence booster for us ... we just need to keep it going."

University of Mary wide receiver Danny Kittner has been named the Northern Sun Intercollegiate Conference’s Offensive Player of the Year.

The West Fargo Packers defense even stymied their head coach.

How St. Louis is beating the NFL in court and may win billions after losing the Rams

The massive canopy rises from the Los Angeles landscape, providing cover for the spectacular stadium beneath it.

Patrick Mahomes and the Kansas City Chiefs are back in a familiar spot. Same for Bill Belichick and the New England Patriots.

Weikum's an anchor in the trenches for St. Mary's

Jason Garrett is out.

After missing the last four games, Zach Wilson will be back under center for the Jets against the Texans.

Ron Cook: What happened to players fighting their own battles?

The big news in Cleveland on Sunday was that Baker Mayfield failed to meet his mandatory media obligations after the Browns' dreary 13-10 win against the Detroit Lions.

Brad Biggs: As report of Matt Nagy’s imminent firing swirls, Bears leave their coach to fend for himself. Whether it’s after Thursday’s game or before Week 17, the end seems near.

According to popular lore, when the American humorist Mark Twain was asked about rumors that he was gravely ill, he replied, “The reports of my death are greatly exaggerated.”

Legacy running back Weston Snyder (3) crosses the goal line for a touchdown before Mandan's Devon Church (13) can make the tackle.