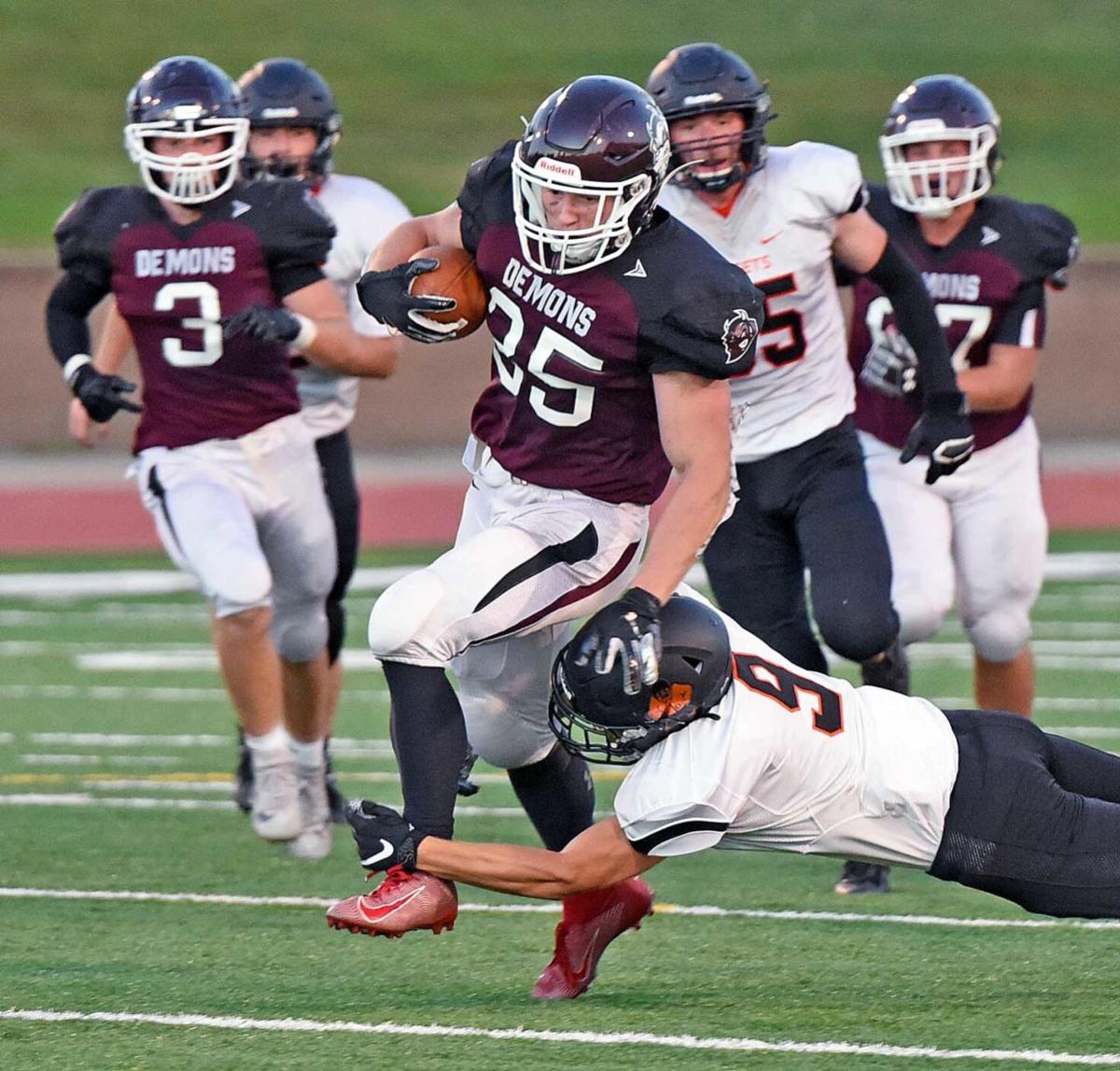 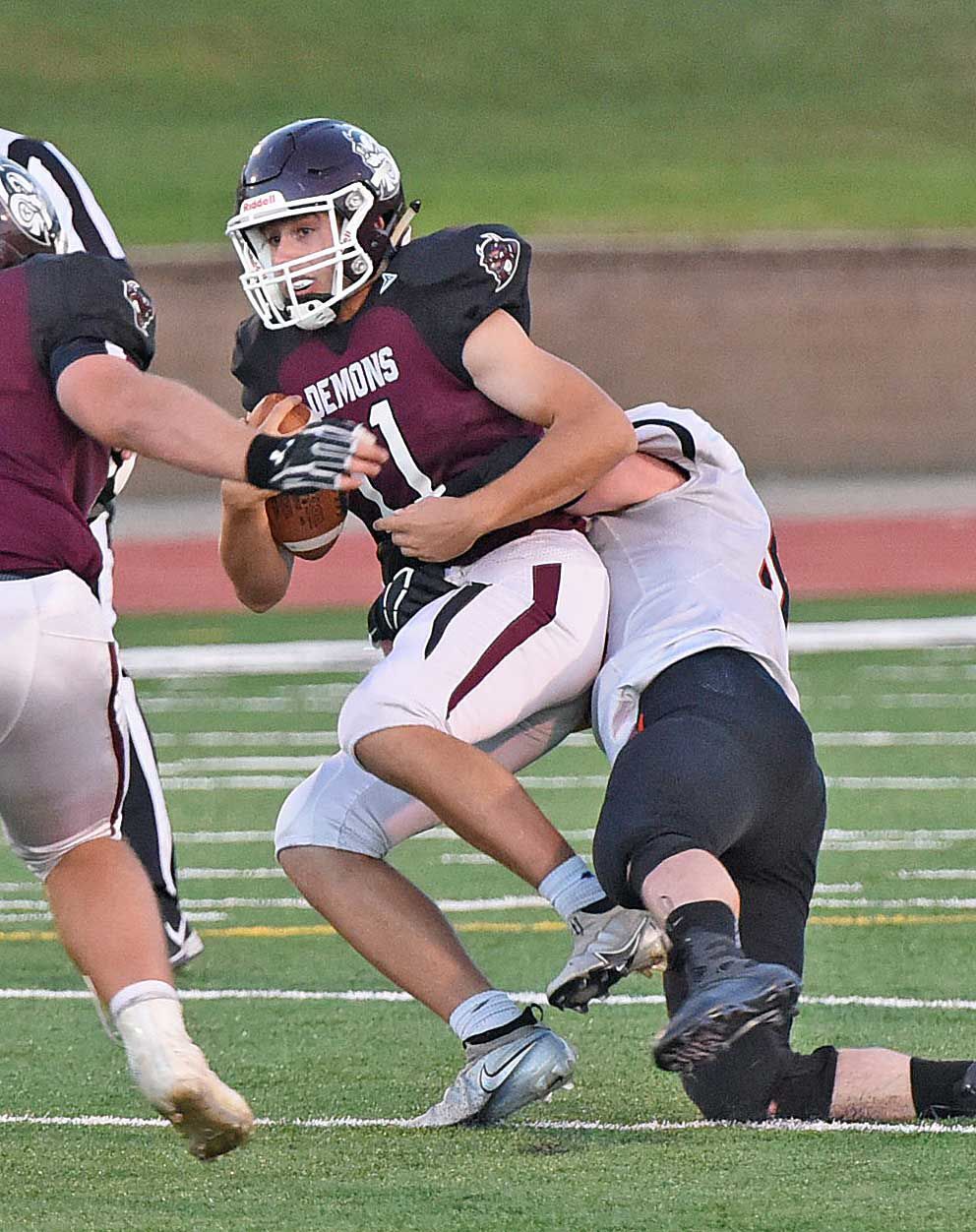 The Demon offense played a whole game and the defense was there in the second half.

It added up to a 42-7 Bismarck High School victory over Dickinson  on homecoming night at the Bowl.

Bismarck’s attack piled up 502 yards and 24 first downs while following the lead of junior tailback Isaiah Huus, who dashed for 235 yards and four touchdowns while carrying the pigskin only 15 times. His scoring harvest consisted of runs of 45, 3, 9 and 67 yards.

Huus’ stand-in, senior Lucas Miller, picked up 73 yards on five attempts, the final carry a 65-yard burst to close the scoring for the night.

Bismarck led 21-7 in a strange first half. Dickinson controlled the ball, running 30 plays to Bismarck’s 20. The Demons led thanks to an opportunistic offense.

An interception by Jack Steckler set up the second Bismarck score. Taking over at its own 41-yard line BHS needed only five plays to reach paydirt, Huus darting in from three yards out.

Dickinson marched 65 yards in 10 plays for its lone touchdown. Luke Mavity scored standing up from two yards out.

The Midgets could easily have had more. Three of their possessions died in BHS territory, the first at the 5-yard line.

Bismarck’s defense turned tiger in the second half as the Demons opened a 42-7 lead that allowed the entire fourth quarter to be played with a running clock.

Huus ran for two touchdowns, including his 67-yarder after the break and Miller contributed his 65-yarder on the next BHS snap of the ball.

The defense simply shut down Dickinson’s offense over the final two periods. Dickinson managed just three first downs and 51 yards in the second half.

“The big thing was we played with a little more of an edge (on defense) in the second half,” BHS head coach Mark Gibson said. “Dickinson took it to us in the first half and we didn’t respond.”

Huus, who has amassed 350 yards on the ground in two games, said he wouldn’t have minded a few more carries, but conceded 235 yards and four touchdowns is a pretty good night.

“Normally I get the ball from 15 to 30 times, anywhere in there … but I’m always hoping for more,” he said.

At 6-foot and 200 pounds, Huus is a load to bring down, but he adds speed to the equation, too.

He insisted his offensive line deserves the lion’s share of the credit for Friday’s performance.

“They deserve a huge shout-out. Those guys are awesome,” he emphasized. “They play their butts off, and I give them full credit.”

Gibson enjoyed watching his hogs move the bodies and Huus cover the ground.

“I love those guys (in the line),” Gibson said. “They’re a close-knit group, and they’ve logged a lot of hours with me with a lot of yelling and screaming. I think they realized if we’re going to be good it starts there and they take pride in that.”

Jeske, No. 1 Century kicking it into gear

Century may have started a little slowly this season, but the Patriots have officially kicked it into gear.

Matt Calkins: No. 3 is the clear No. 1: Why the MVP award is Russell Wilson's to lose

There was one guy right there with him. One guy matching his efficiency. One guy whose production challenged the narrative that the NFL's MVP resides in the state of Washington. Heading into Sunday's game vs. Tampa Bay, Packers quarterback Aaron Rodgers had put up numbers as good, if not better than Seahawks QB Russell Wilson. His passer rating was just one point below. His QBR - considered a ...

Mike Sielski: The secrets of Travis Fulgham's wild and unlikely journey to the Eagles

Son of diplomats. Lived all over the planet. Didn't play football until he was 16. Walked on at Old Dominion.

No. 3 Demons roll up 380 yards rushing in win over Legacy

Friday night’s West Region football game between Bismarck High and Legacy at the MDU Resources Community Bowl was a study in contrast.