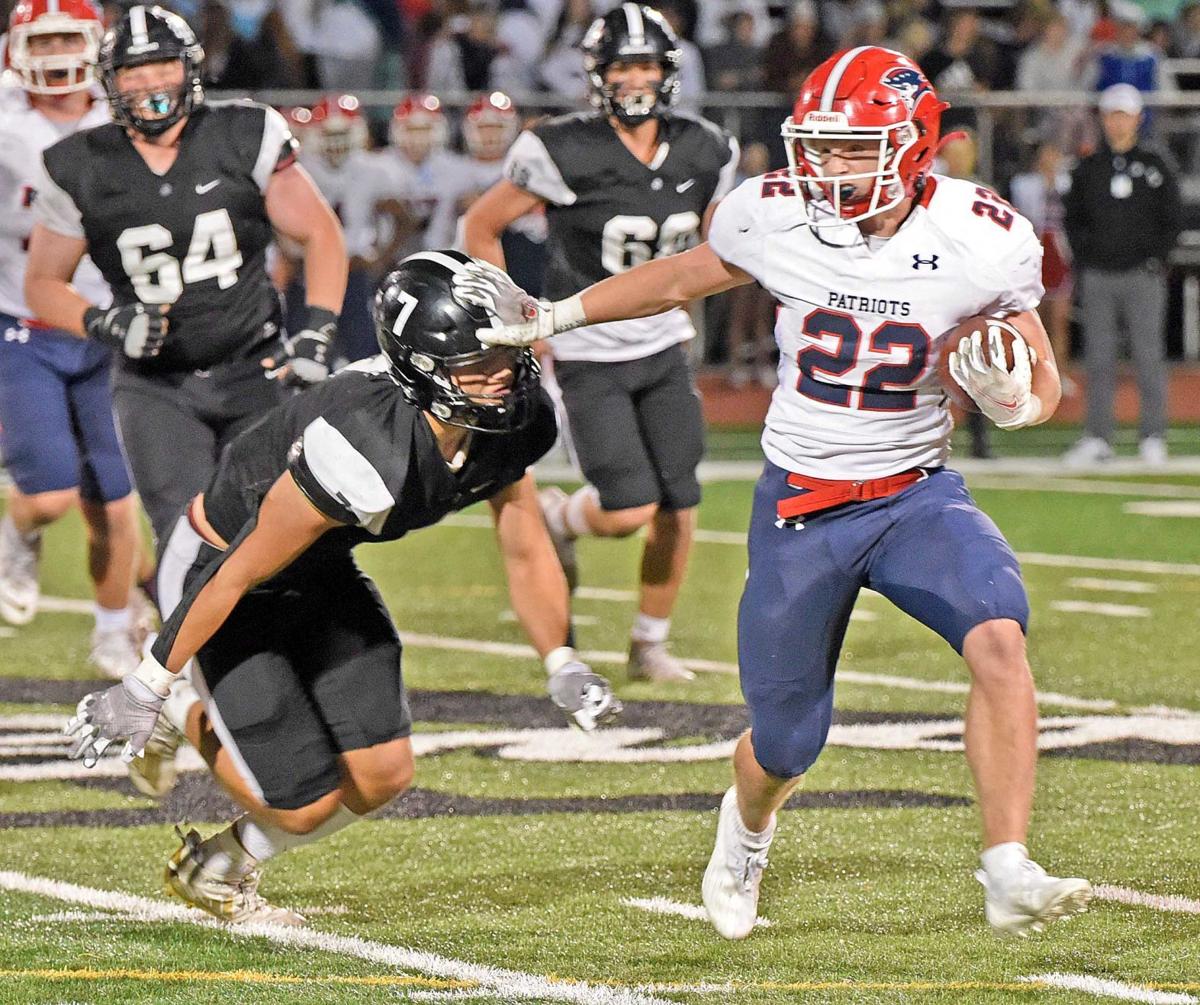 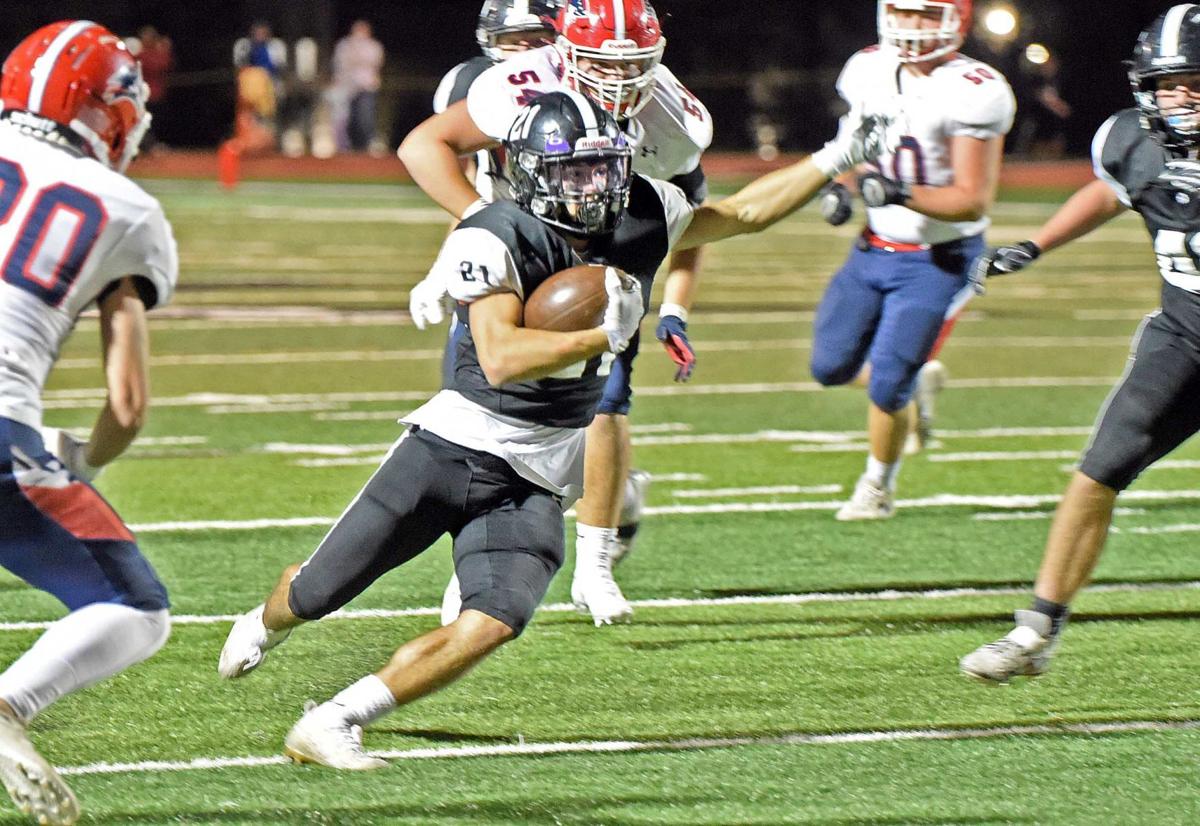 Bismarck Century has taken its place among the elite high school football programs in North Dakota history and at times made it look easy. No so on Friday.

The top-ranked Patriots turned two big plays on offense and returned a blocked field goal for a score into 21 points and held off the Mandan Braves 21-14 for their 27th straight win in an 11AA West Region game at Starion Sports Complex.

With its offense sidetracked for the second straight week -- they scored 15 points the week before -- the Patriots relied on their defense, just like Mandan.

“I don’t know what to say,” Wingenbach said. “We had a great week of practice, we just didn’t come out to play. These were mistakes we haven’t made in three years.”

Like botched snaps, punts into their own players, kickoff return touchdowns against them and pick sixes.

“Everything is on film and it’s correctable. We just have to get back to the basics,” Wingenbach said.

At least one of those basics was on display -- the defense. The Patriots region-leading defense stymied the Braves all game, especially in the second half. The Braves were held to 52 yards after halftime.

Mandan quarterback Max Carlson completed 15 of 27 passes for 146 yards. The Braves were held to 17 yards rushing. The offense never reached the end zone, but the special teams did, and the defense really gave up just to big plays that led to scores.

“The touchdowns they got on offense, our offense set up for them,” Sheldon said.

The first of Century’s two biggest plays came on its first possession when running back Jacob Bosley broke several tackles and ran 42 yards down to the Mandan 8-yard line. Three plays later quarterback Brady Dahl scored on a four-yard rollout keeper for a 7-0 lead.

The next three touchdowns were scored by defense and special teams and left the game tied at 14-all.

First, Mandan’s Jaxon Scott intercepted a Dahl pass intended for Jacob Renz and took the pick back 40 yards for a score. Sarah Burgum’s kick tied it at 7-7.

Century’s next possession ended with a bad snap on a punt and the Braves took over deep in Patriots’ territory. But the Braves’ drive stalled, and on fourth down, Burgum attempted a 34-yard field goal. The kick was blocked and Trayton Hinderer scooped it up for Century and returned it 70 yards for a TD and a 14-7 lead with 6:24 left in the half.

On the ensuing kickoff, Karsyn Jablonski took the ball at his own five and dashed through a huge hole in the middle of the defense. After beating one last defender, Jablonski coasted into the end zone for a 14-14 tie.

The tie lasted only a few minutes before Century closed out the scoring just before halftime.

Century’s second big play of the night, the first since Bosley’s big run, was a 53-yard pass to running back Peyton Arndt on first-and-21. With 45 seconds left in the half, Arndt scored on a 3-yard run to go up 21-14. Throw out Bosley’s run and Arndt’s reception and the Patriots had just 27 yards rushing and 40 passing.

Dahl completed just five passes for 101 yards, but he ran for 89 yards, 82 of those in the second half. Arndt finished with 57 yards, 39 after halftime, and he caught two passes for 52 yards. They weren’t typical CHS numbers, but they were enough to keep the Patriots’ win streak alive.

“This is not us,” Wingenbach said. “We’ve got to get back to where we were a little bit.”

The Patriots’ winning streak is the fourth-longest in North Dakota prep football history. If the Patriots win out, they would head to the playoffs tied for the second-longest winning streak at 31.

Hettinger-Scranton's nine-man football team has proved good things come to those who hang in there.

Shiloh's strong season has come against a serious schedule

Shiloh Christian has won a lot of football games with Funnon Barker in charge, 99 in 12 seasons, to be exact.

It would have been hard to script a better opening half for the St. Mary’s Saints.

Grant County-Flasher's football team has been playing to its nickname down the stretch.

Century erupts in second half, runs past Fargo Shanley