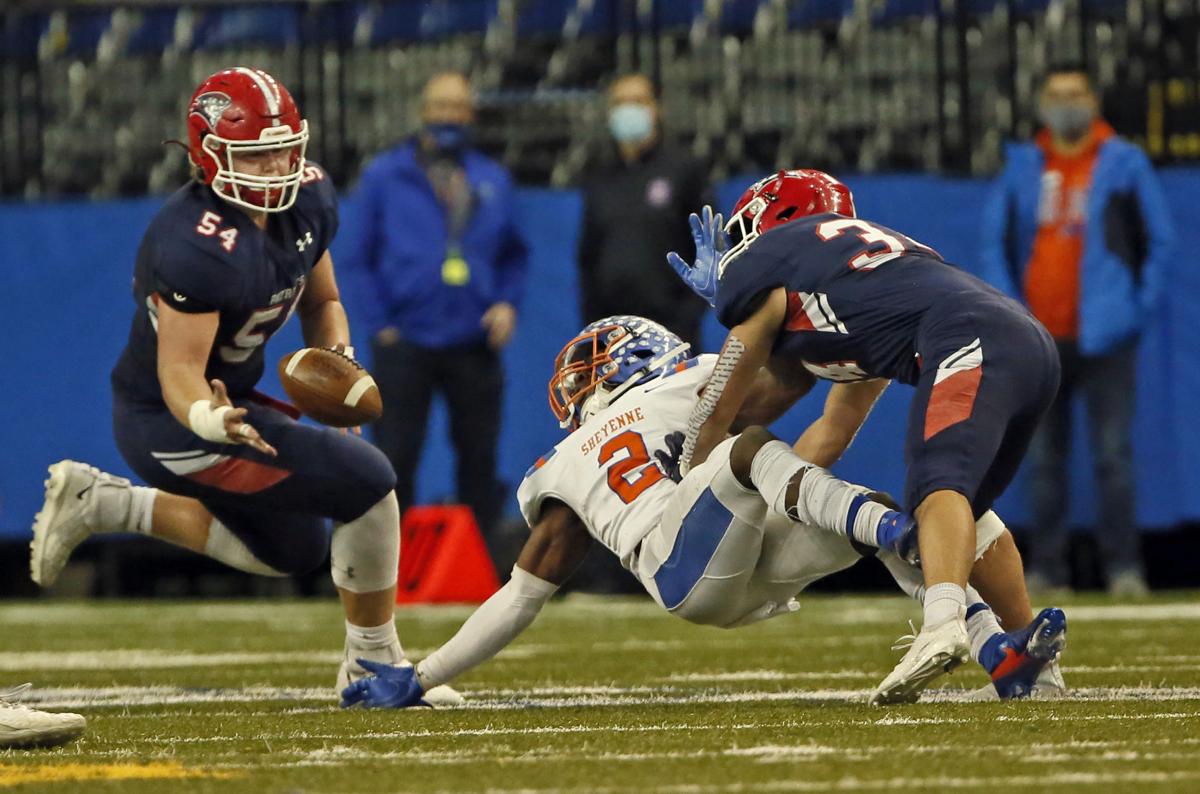 Century's Cade Garcia blasts West Fargo Sheyenne's Barika Kpeenu to knock the ball into the waiting grasp of teammate Andrew Leingang for an interception during the Class AAA state football championship game at the Dakota Bowl at the Fargodome on Friday. 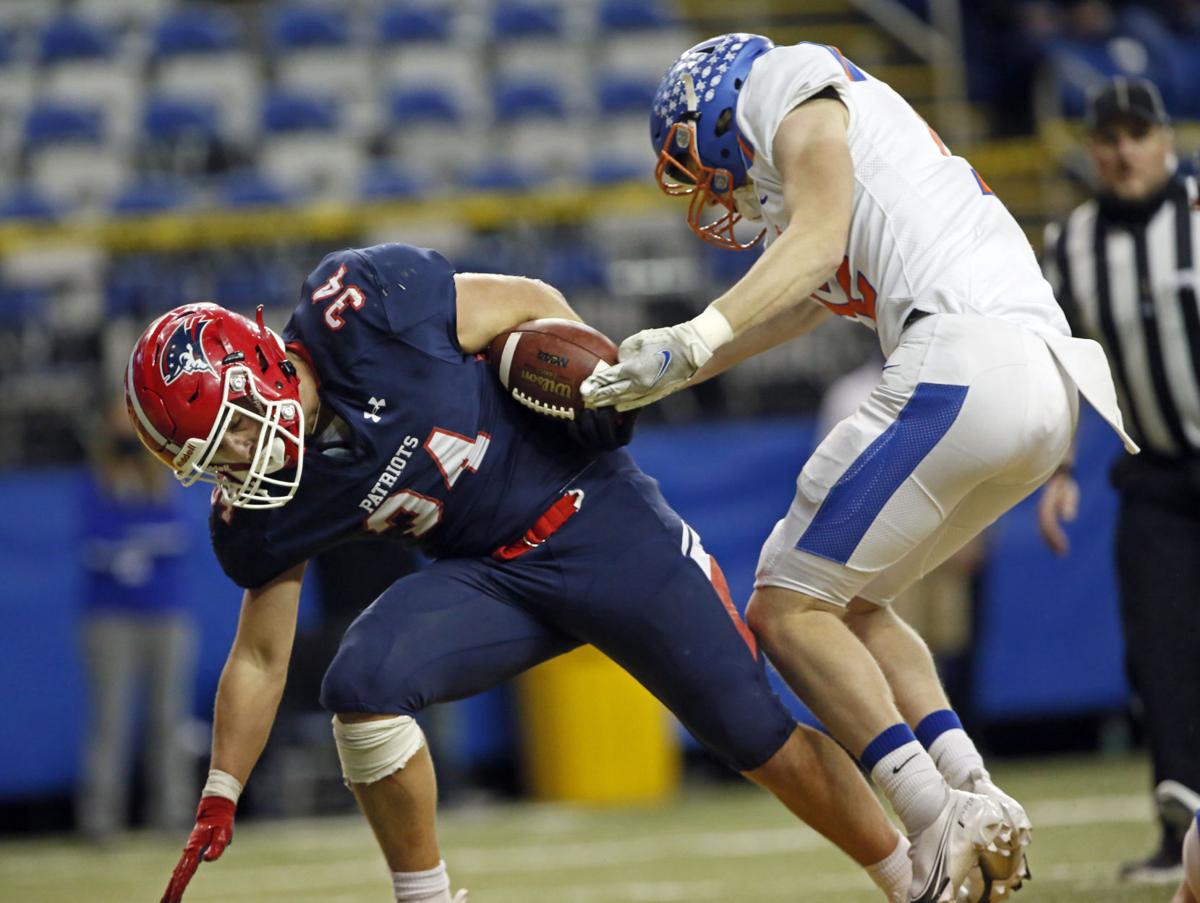 Century's Cade Garcia scores a touchdown past West Fargo Sheyenne defender Kellen Entz during the Class AAA state football championship game at the Dakota Bowl at the Fargodome on Friday.

Century capped off a perfect 10-0 season during a pandemic by blowing out West Fargo Sheyenne 34-0 in running-clock fashion in the Class AAA championship game Friday night at the Fargdome.

"To accomplish the goal you started the season with feels great and that's what we did tonight," said senior Cade Garcia. "The bar for Century football is high and we want to keep it there."

Century beat the Mustangs in the AAA title tilt for the second year in a row, but this one was much more convincing. The Patriots led 24-0 at halftime en route to the school's fourth state title in the last six seasons under head coach Ron Wingenbach. Century's winning streak now stands at 22 games, with the final stretch of 2020 one for the books.

"From the time we played Williston until tonight, that was as good of football, consistently, that we have played," Wingenbach said. "This is a special group. The coaches, the players, can't say enough about them. Additionally, it's a very enjoyable group to be around. Challenging season in many ways, but boy, it sure was rewarding."

Garcia ended his stellar career for the Patriots with 142 yards rushing and two touchdowns, two coming in a dominant first-half performance. For good measure, Garcia's bone-crushing hit on NDSU commit Barika Kpeenu in the second quarter ended in a highlight reel interception when Kansas State-bound lineman Andrew Leingang was able to corral the ball after it was jarred free.

"We were determined tonight. There was some smack talk early in the game and that got us going even more," Garcia said. "Sheyenne, we know they're a good team, but we were on a mission."

Century excelled in all three phases.

"It was a very thorough performance. We felt good coming in with our preparation and our game plan, but the kids really, really executed," Wingenbach said.

On special teams, standout senior kicker Wade James did his part as usual. James booted a 34-yard first half field goal to make it 10-0 early in the second quarter. On the ensuing kickoff, Kpeenu was unable to field a bad-hop boot by James. Seth Nelson was in the right place at the right time and flopped on top of the loose ball. Three plays later, Garcia bulled through multiple would-be tacklers for a 10-yard touchdown run and 16-0 lead.

After punting on its first possession, Century went 64 yards on nine plays on its second series for the game's first score. Speedy sophomore tailback Peyton Arndt took his first carry of the game the final 7 yards for a touchdown.

Even when it looked like something might go wrong, it didn't. Punting late in the second quarter, the snap sailed well over Colton Schulte's head. Being the baseball player he is, Schulte scooped it up, somehow managed to elude two Mustangs and still got off a 35-yard boot.

The Mustangs ran 22 plays in the third quarter, 16 more than Century, but that advantage resulted in zero points.

The final points belonged to Century. Noah Schaffner exploded for a 30-yard touchdown run to make it 30-0 five minutes into the fourth quarter. Schaffner was forced to leave the game briefly in the second quarter, but returned later to shepherd the Century offense.

"Noah's a tough kid and a really good leader," Wingenbach said. "We were kind of holding our breath there for a minute. It was great to get to see him finish the season on the field."

After Sheyenne fumbled away the ensuing kickoff, James boomed a 43-yard field goal for the icing on a second straight perfect season for the Patriots.

"Being the kicker, it's a fun role, but there's also a little pressure because if you miss, you feel like you screwed up and hurt the team," James said. "It's fun to contribute to our success. I love my teammates. This was a great way for us to go out."

It was indeed, state champions yet again.

"We did what we wanted to do this season," Garcia said. "This is why you play. Man, it feels great."

Is Tom Brady the Sorest Loser Of All Time?

Tom Brady is considered by many to be the Greatest Of All Time. But is the GOAT also the SLOAT (Sorest Loser Of All Time)?

The Thanksgiving night game between the Ravens and Steelers has been switched to Sunday because of coronavirus issues with Baltimore.

FARGO -- Defense has been St. Mary's calling card all season.

In early August, three months before a coronavirus outbreak that would deplete his roster, sicken one of his top players and call into question a staff member's conduct, Ravens coach John Harbaugh said he couldn't imagine many places safer than the team's facility.

Century's Cade Garcia blasts West Fargo Sheyenne's Barika Kpeenu to knock the ball into the waiting grasp of teammate Andrew Leingang for an interception during the Class AAA state football championship game at the Dakota Bowl at the Fargodome on Friday.

Century's Cade Garcia scores a touchdown past West Fargo Sheyenne defender Kellen Entz during the Class AAA state football championship game at the Dakota Bowl at the Fargodome on Friday.