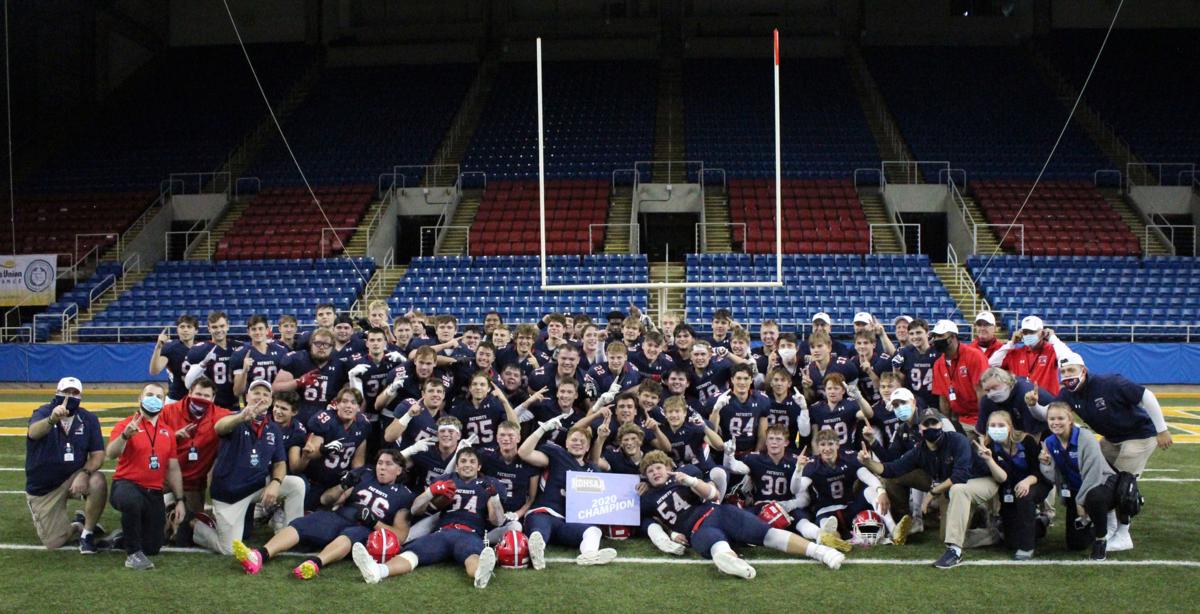 Century's football team is photographed after defeating West Fargo Sheyenne 34-0 in the Class AAA championship game Nov. 13 at the Fargodome. 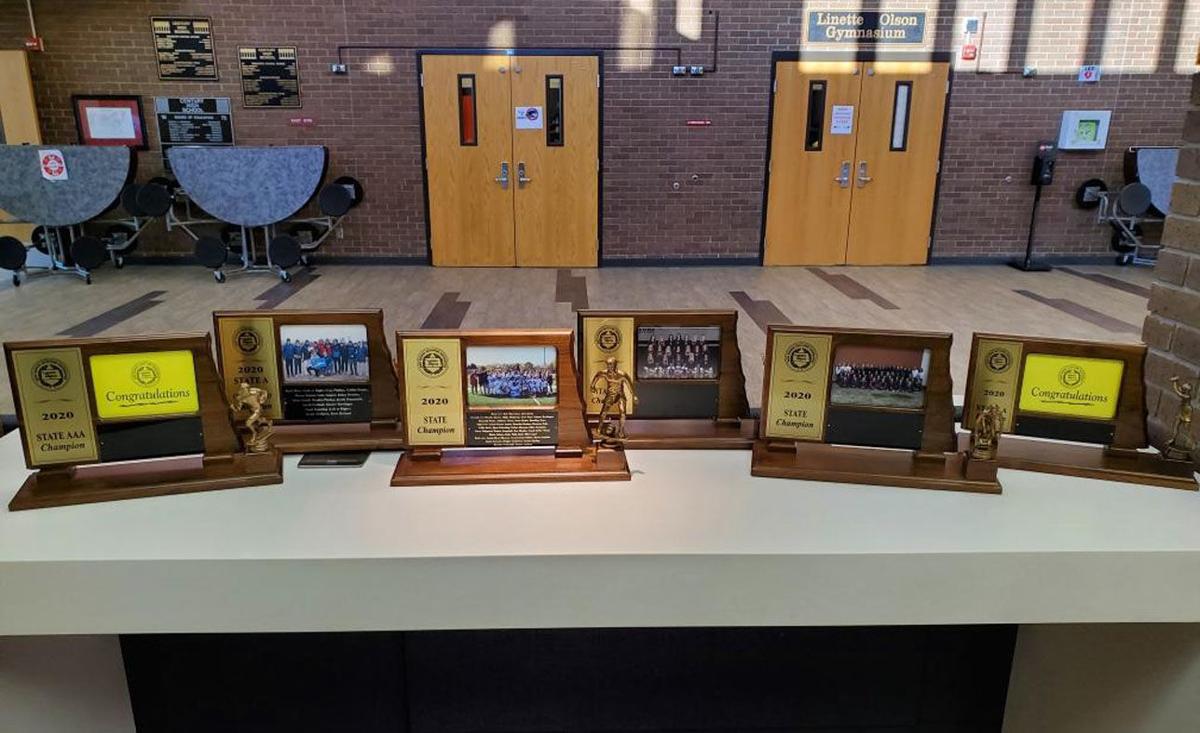 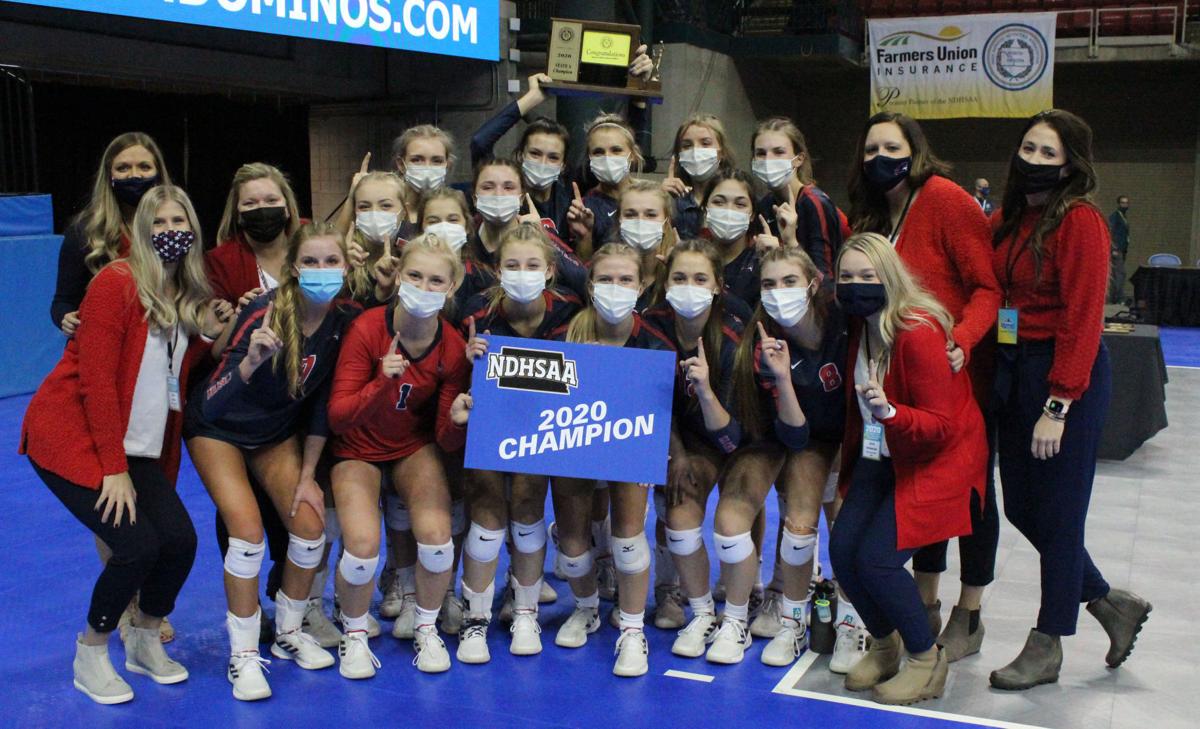 Century takes a team photo after beating West Fargo 3-1 at the Fargodome on Nov. 14.

For many, 2020 will not be remembered fondly.

That is not the case at Century High School, however.

The Patriots’ fall of 2020 will be remembered for one thing – success.

Of the eight fall sports, Century won state titles in five of them. One of the three the Patriots did not win, girls golf, ended in a second-place finish and the individual champion – Hannah Herbel – goes to, of course, Century.

Ben Lervick, activities director at Century High since 2014, said all the success was a bonus.

“At the start of the year, the kids didn’t know if they’d finish the season. Neither did we,” he said. “To make that many state tournaments, and win that many, it was icing on the cake.”

“Sometimes you get some groups of kids that are really talented and we’ve been on a run for a while here now,” Lervick said. “You pair that with really good coaches, like we have, and it creates a very positive culture. It’s not a win-at-all-costs mentality. We want kids to be committed to their teammates, to their coaches and to their sport, but we also want balance.”

Since 2015, the Patriots have won six titles in girls swimming, five in volleyball, four in football, three in boys cross country and two in girls golf.

“You can’t have constant turnover. It takes people time to get up to speed,” Lervick said. “We’re very fortunate to have coaches who have built really strong programs and have stayed through that process. It’s tremendously helpful to have continuity.”

Century has strong numbers throughout its programs. Each roster often contains high-end quality to go with plenty of quantity.

In football, senior Andrew Leingang was named the Class AAA Senior Player of the Year and was one of eight all-state players selected, including first-teamers Leingang, Cade Garcia, Lucas Schweigert, Maguire Martin and Brock Johnsen. Jacob Bosley, Thomas Jeske and Noah Schaffner were named to the second team.

Century’s swimming roster featured the premier performer in the state not only this year, but the last three years, in senior Lexi Duchsherer. The D-I bound Duchsherer (University of Arizona), owns the state record in the 50-yard freestyle, and swam legs on three record-setting relays, including the anchor leg in two of the three. Century will return four all-staters next year -- Erin Palmer, Sarah Dorrheim, Izzy Koebele, and Oliva Schuchard -- in its attempt to win a seventh straight title.

Mason Kindel (5th), Jacob Ersland (12th), Ethan Bender (13th) and Griffin House (18th) led the Century cross country team to its fourth title in five years. House will return next fall for the Patriots, who finished 15 points ahead of any other team.

Fargo Shanley kept Century from a 3-peat in golf, but with full health, things may have been different. Injuries kept Leah Herbel sidelined much of the season. Even still, Hannah Herbel (1st) and Riley Crothers (9th) kept Century in contention.

Keeping kids on the field of play this season has been trickier than ever before.

“Everybody was dealing with the same thing. We want kids to be able to compete. It’s important, but safety has to come first,” Lervick said. “We all ran into issues here and there, but the kids and coaches deserve a lot of credit for following the protocols that were in place.”

Maintaining the same attention to detail is important as winter sports kick into full gear. As was the case with fall sports, non-conference events for winter sports will not be played. Tournaments for sports like wrestling, notably the Rotary, will not be held. But otherwise, most sports should be able to play the full allotment of conference games despite the start of the season being pushed back two weeks to prevent spread of the coronavirus.

Other challenges have popped up. At Century, it’s finding space for everyone to practice, whether that be the basketball team, wrestling squad or the choir. To keep everyone spaced out properly, all practices need to be held in a gym.

“It’s going to be interesting. We need to be flexible, all of us,” Lervick said. “We’ve offered up the same response as we did in the fall, which is, we may not get through it but we’re going to make an attempt because we need to, we want to. We want to give kids the opportunity to be involved.”

Retired players are eligible for payouts in the NFL's $1 billion settlement of brain injury claims. But the NFL uses a scoring algorithm on dementia testing that assumes Black men start with lower cognitive skills.

That chipping noise across the NFL is star quarterbacks tearing down the wall of feudal power. Aaron Rodgers demands out of Green Bay.

Bismarck Bucks head coach Rod Miller was hoping the COVID-19 virus  would have run its course by now.

Dan Wiederer: Aaron Rodgers is as good as gone from Packers. Suddenly Bears might have best QB situation in NFC North.

Century's football team is photographed after defeating West Fargo Sheyenne 34-0 in the Class AAA championship game Nov. 13 at the Fargodome.

Century takes a team photo after beating West Fargo 3-1 at the Fargodome on Nov. 14.