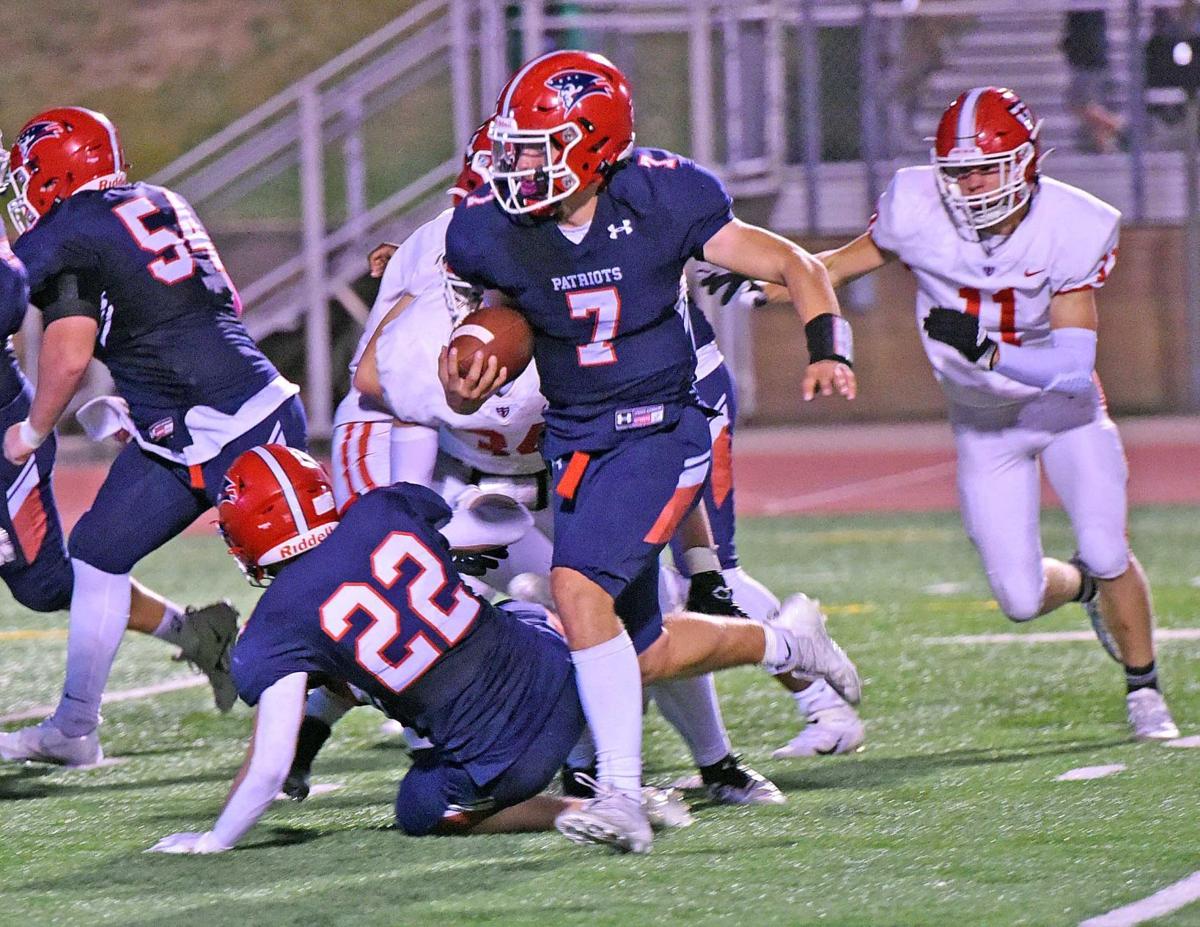 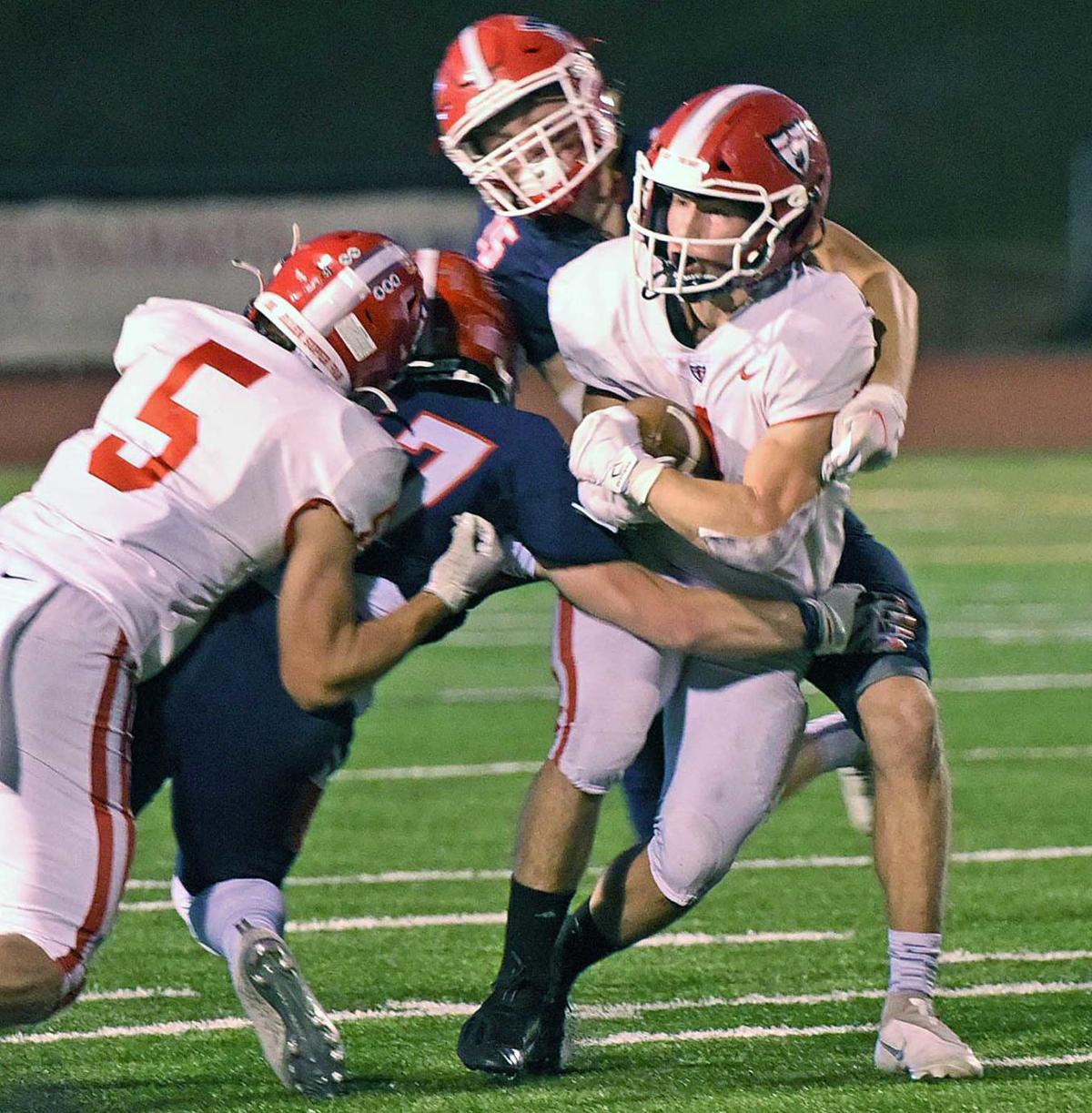 The Century Patriots were struggling early on, trailing Fargo Shanley 7-0 and gaining only five first downs in the first half.

The top-ranked team in Class 11AA turned the tide quickly in the second half, scoring on six consecutive offensive possessions, turning the No. 3-ranked Deacons over six times and rolling to a 49-7 victory on Friday night at the MDU Resources Community Bowl.

It all started with a big play on Century’s second snap of the third quarter.

Brady Dahl dropped back and connected with tight end Cyan Sorenson on a 64-yard strike to the Shanley 5-yard line. That set up a 1-yard quarterback sneak touchdown for Dahl, and the floodgates opened.

“I saw that all of their guys went with Arndt and he was wide open so I just made a throw. He’s a really good player,” Dahl said. “I knew I could trust him to catch the ball.”

“The big pass to Cyan Sorenson over the middle just kind of sparked us and then once we got that first score, with our kicker we established field position,” Patriots coach Ron Wingenbach said. “Then we had a couple of defensive turnovers and it seemed like we had several short fields and the momentum and things kind of snowballed a little bit.”

Dahl had a big game for the Patriots, rushing 23 times for 96 yards and four touchdowns and completing 7 of 9 passes for 184 yards and a TD.

The Patriots extended their winning streak to 28 games.

Century scored on its first six offensive possessions of the second half, scoring 35 points in the third quarter and added a touchdown early in the fourth.

From down seven at the half, the Patriots put up seven touchdowns – including a defensive score on a Brayden Hendricks pick-6 – in less than 16 minutes of clock time.

“They certainly had us on our heels,” Wingenbach said. “They kept eight, nine in the box and just said if you’re going to beat us, go ahead and throw it. We had to do that and maybe I learned a little something too, we’ve just got to take the leash off of some of these guys and let them play.”

“Our offensive line started getting a push and that just made it really easy for me and our running backs to run the ball,” Dahl said. “Everybody around me played very well.”

“You look at (Dahl), he’s 6-1, 205 – you know, we don’t even have backs that big, so you know he’s like a hybrid fullback/tailback in the backfield that can throw the ball and our offense is going to kind of revolve around that,” Wingenbach said. “We have to establish some other things and we will. We’ve got a few things we’ve been working on and tonight we just didn’t get an opportunity to run it.”

Dahl scored on runs of 1, 4, 3 and 4 yards and connected with Jacob Renz on a 33-yard TD pass in the third quarter.

“The defense set our offense up in good field position in the second half, which helped us score points,” Dahl said.

“We had one pick-six and a couple of other interceptions, a fumble recovery,” Wingenbach said. “All were really instrumental in establishing field position and letting our offense get some momentum.”

Isaiah Pajimula added a 5-yard TD run on the fifth play of the fourth quarter. On Shanley’s ensuing possession, Hendricks returned an interception 22 yards to paydirt to make it 49-7 with 8:21 remaining in the contest.

“I think we moved the ball in the first half, we just didn’t convert a couple of times on third and fourth down but in the second half we really got it going,” Dahl said.

The Patriots forced six turnovers, five in the second half, and limited Shanley to 77 yards of total offense after the intermission.

“No. 1 is we flew to the ball a bit better,” Wingenbach said. “Our perimeter play, especially our two outside linebackers, kind of figured out what their scheme was and I thought our corners played very well. They got the hook and ladder on us in that third quarter but we knew that was in their toolbox and they executed it well. Overall, just really pleased with the defense.”

NFL Week 6 Market: Will weather be a factor?

Whatever ailed the Century Patriots earlier this season has been cured.

Shiloh's defense leads the way in victory over Southern McLean

With time dwindling in a one-score game, a little improvisation paid big dividends for Shiloh Christian.

Whatever ailed the Century Patriots earlier this season has been cured.

St. Mary's bounce back in big way after loss to Jamestown

Turnovers tend to get you beat.

Bismarck High School not being able to run the football is like a winter without snow. It just doesn't happen.

In a game with 13 touchdowns, it was the University of Mary defense that was the difference.