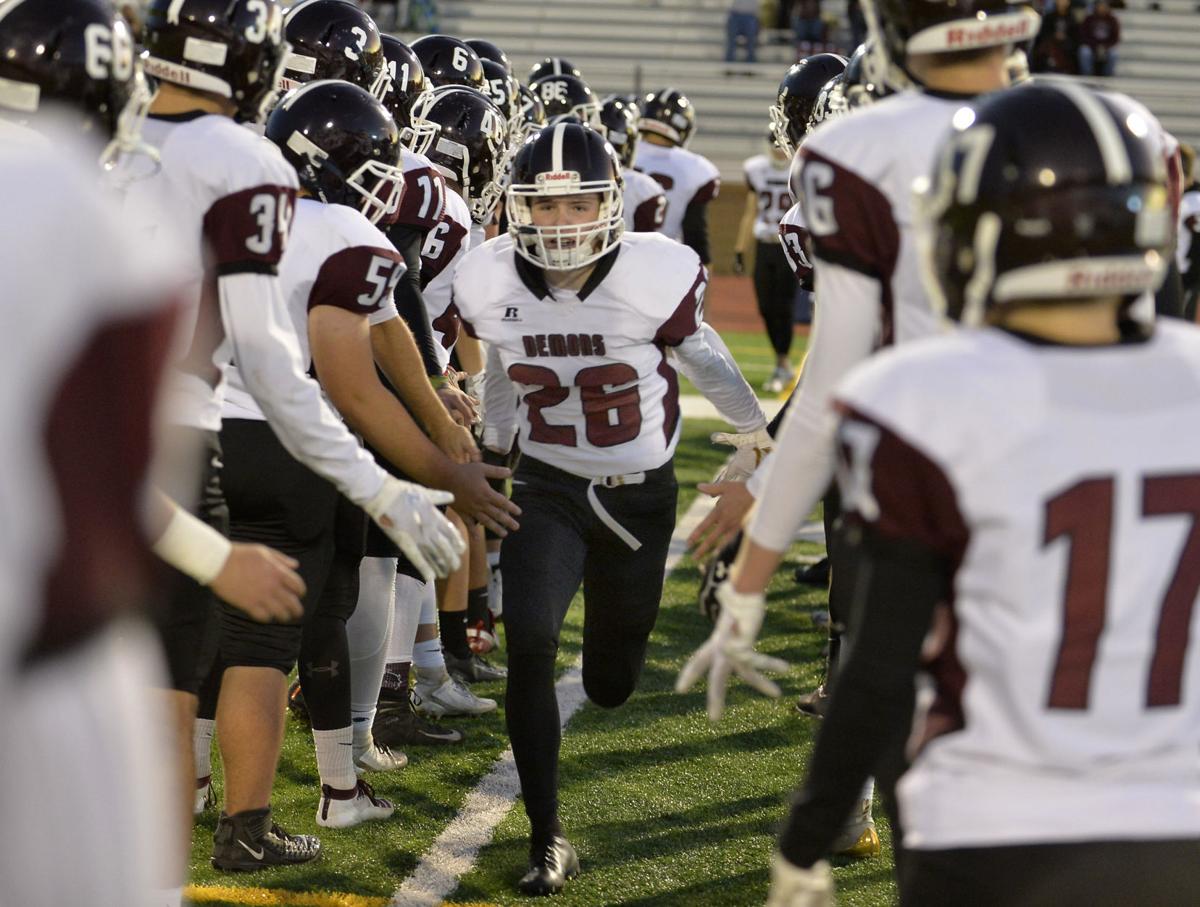 Bismarck High School defensive back Lucas Miller runs down the line after his name is announced before a late-October game against Bismarck Century. 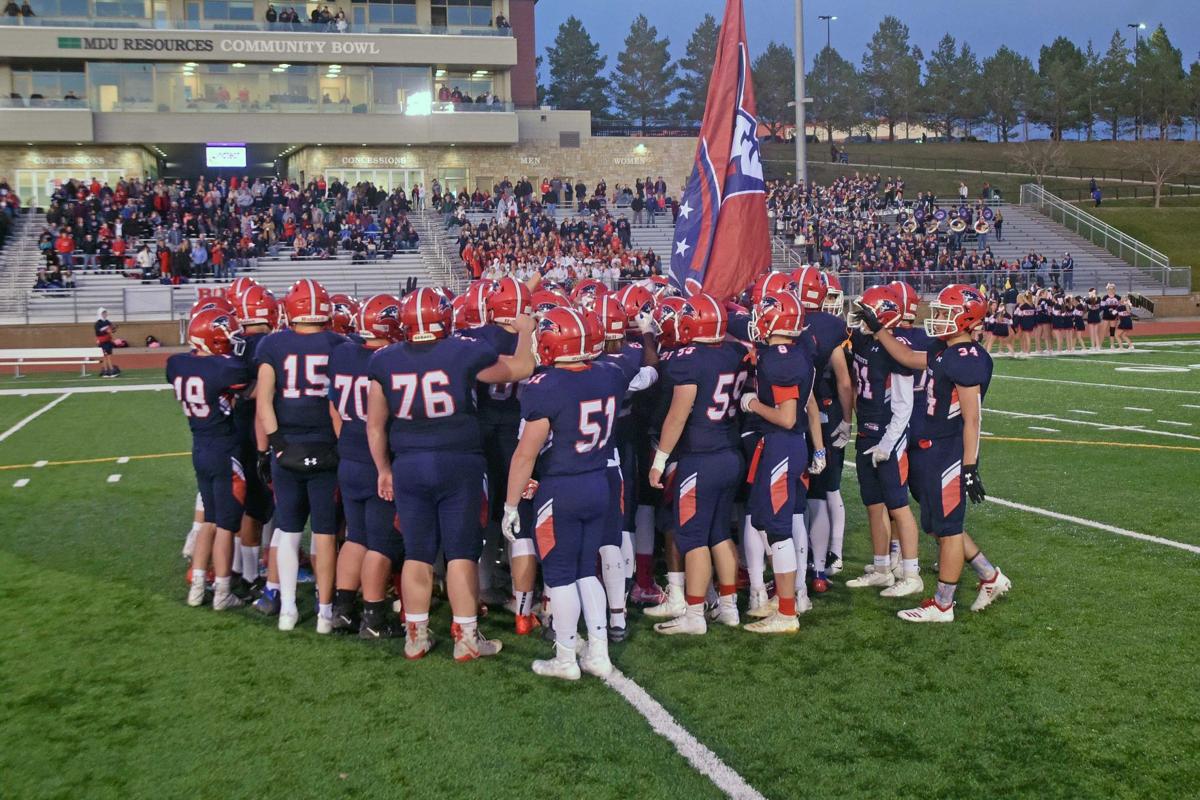 The Bismarck Century High School football team at the MDU Resources Community Bowl in October. Century plays West Fargo Sheyenne tonight for the AAA title at the Dakota Bowl at the Fargodome.

Dan Smrekar has guided St. Mary’s Central High School to seven state football titles. He’s amassed more than 250 career victories in his 42 seasons as head coach. But, despite the unforgettable championships and impressive resume, Smrekar is on a tireless search for the team’s next great quarterback or linebacker or kicker.

But he doesn’t stray far from the St. Mary’s football field that bears his name. His school’s hallways and common areas are his recruiting turf. Smrekar calls football “a numbers game,” which is why he encourages students who may not have any football experience to give the sport a try. Work hard and follow the rules, he says, and you’ll play.

This type of student engagement takes place at schools across the state. And it’s one reason North Dakota coaches say that their state has bucked the national trend of decreasing high school football participation.

In a study of numbers published by the National Federation of State High School Associations, The Bismarck Tribune found that 4,078 North Dakota high school boys and girls participated in 11-man and 9-man football in 2018, which is nearly identical to the 4,098 who participated five years earlier.

Meanwhile, high school football participation declined 7.5% nationally during those years. And for a couple of states that border North Dakota, the drop was even sharper -- 9.8% in South Dakota and 16.3% in Montana.

The reasons for North Dakota’s steady participation against this backdrop vary as much as the causes for the national decline.

Football isn’t the only high school sport with participation that has dropped. Boys wrestling, boys golf and girls basketball numbers all were down at least 6% nationally between 2013 and 2018. But the spotlight shines brightest on the gridiron, since more than 1 million high school students play football.

Football participation remains strong in Southern states such as Texas, Alabama and Mississippi. Cameron Smith, a national high school sports blogger and writer for USA Today, said the national decline is taking its greatest toll in the Northeast and other parts of the country. Vermont experienced a 25% decline in 11-man boys football participation between 2013 and 2018. In New York, it dropped 22%.

“There’s less of a cultural thread that’s held it in esteem the way that it is in those Southern states,” Smith said.

The lack of participation nationally runs in stark contrast to football’s TV popularity. CNN recently reported Nielsen data that show NFL viewership for the season’s first month was up 5% compared to the first month of 2018 and up 8% compared to 2017.

Southern McLean sixth-year head coach Josh Harvey said the game’s TV appeal is an important gateway to participation. He said he talks to students who don’t play and say they don’t like the sport, but the same students often will acknowledge they love watching it on TV.

Player safety and the physicality of football have long gone hand in hand. In recent years, concussions and head trauma concerns have shaped the player safety conversation.

Head injuries and football became even more closely tied when Dr. Bennet Omalu discovered chronic traumatic encephalopathy (CTE), which the Mayo Clinic describes as “brain degeneration likely caused by repeated head traumas.” Omalu first diagnosed CTE during an autopsy of former Pittsburgh Steelers center Mike Webster in 2002, and the story of Omalu’s findings were popularized in the movie “Concussion” and in the book “League of Denial” by ESPN reporters Mark Fainaru-Wada and Steve Fainaru. Since then, CTE has been found in the brains of dozens of former NFL players, which has created a public relations problem for the sport, according to Smith.

“The concerns of CTE and trauma, whether valid or not, has led to a cooling effect on younger participation,” Smith said. “That trickling effect is starting to affect the high school level.”

Justin Fletschock, assistant director for the North Dakota High School Activities Association, said a number of steps have been taken to protect players, including the introduction of targeting penalties. He also said contact practice rules were put in place to limit the amount of contact in practices each week.

A study earlier this year by the American Academy of Pediatrics’ official journal found that concussion rates during a five-year period did decline nationwide at high school football practices but increased during games, which may reflect a more widespread approach to less contact in practice.

“A lot of the rules you’re seeing in the NFL and NCAA started in high school,” Fletschock said. “I think the high schools have done a great job being the forerunner for a lot of the safety concerns.”

Sara Holzer has one son playing football at Bismarck High and another in the youth program. She feels the programs do a great job of keeping kids safe.

“They’re taught how to tackle correctly,” Holzer said. “When they get on the field, they’re very prepared for what’s going to happen. Injuries happen, but the equipment is as good as it’s ever been.”

Enrollment ups and downs are nothing new to Steve Kleinjan. The New Salem-Almont-Glen Ullin head coach, in his 23rd year, guided the Holsteins during a transition from 9-man to 11-man play in 2007, then back to 9-man in 2015, then back to 11-man this season. He said there were 25 kids out for high school football five years ago, 41 last season and 31 this season. Because of the fluctuating numbers, he’s used to looking ahead to anticipate what’s coming.

“In two years, we’ll be back in the upper 30s again because we have a big group of seventh-graders,” Kleinjan said.

In 2012, Kleinjan said, a fifth-to-sixth grade program was launched to teach kids the fundamentals of football so “they have some skills” before they get to junior high school. Having a program for kids at a younger age should feed talent to the junior high and high school levels.

“They’ve gone through tackling, safety and all the things we emphasize,” he added. “I think that’s been a big thing for keeping our kids safe.”

Tyler Greff played college football at Dickinson State. Football is in his blood -- one of his uncles even reached the NFL. However, he and his wife decided early on that their kids wouldn’t play youth football until they were in the sixth grade. His son, Brennan, is currently a sixth-grader in Bismarck’s youth program. Tyler Greff’s personal history had more to do with the decision than any concerns over player safety.

“I’m a huge believer in kids participating in football,” he said, citing the benefits of teamwork and camaraderie. “I grew up in a small town, and seventh grade was the first year we could play. That was a different dynamic being in a town where you could start playing in third grade.”

Smrekar credits youth football in Bismarck for doing a great job of building the foundation for increased participation in later years. In the last decade, he said, participation in third through sixth grades has been increasing.

“A good youth program is a big factor if it’s done right,” he added.

Fletschock, with the activities association, thinks new schools in metro areas, such as Bismarck Legacy and West Fargo Sheyenne, have helped to keep North Dakota’s participation numbers steady in recent years. His biggest concern is for smaller schools, and 6-man football can be a solution in those places.

“In small towns, when the option is driving 30 miles for a co-op or fielding a 6-man team, the 6-man team might be a better option,” he said.

Six-man football is a novel concept in North Dakota, with a handful of teams starting play just a couple of years ago. However, its roots date to 1934, when Stephen Epler developed the rules for 6-man play. At its peak, as many as 2,000 schools nationally played 6-man football, according to the Nebraska High School Sports Hall of Fame.

The 6-man game is experiencing a resurgence in recent years, as rural towns increasingly choose to field their own 6-man teams rather than form cooperatives. According to the National Federation of State High School Associations survey, eight states fielded a combined 347 teams in 2018, an increase from five states and 221 teams in 2013.

In North Dakota, the website MaxPreps.com lists seven teams, including Center-Stanton, that played this year. The NDHSAA does not sanction 6-man football. As a result, its numbers aren’t included in the national survey.

John Odermann’s Dickinson Trinity football team was in the North Dakota Class A state semifinals just a year ago, but success wasn’t automatic. In his first season as head coach in 2013, Trinity had only two seniors and didn’t win a game. The value of player retention was apparent.

“We knew if we were going to turn it around, we had to make sure that every single one of our juniors was back out that next year,” Odermann said in recalling the 2013 season. “We didn’t win a game, but we did not lose a kid (the next year). I take great pride in the fact that we didn’t lose one kid after not winning a game.”

At a time when participation has lagged nationwide, Odermann said, he retained so many players simply by being involved. He worked to build a valuable rapport with his high school players and even connected with those at the junior high level. He focuses on parental engagement, too. And he encourages his players to be involved in all types of school activities, including other sports, choir, drama and band.

“It’s about the valuable life lessons you get from football,” Odermann said. “It’s not about X's and O's. We can lose every game. We can win every game. What really matters is what kind of men we’re raising when it’s all said and done. Football is uniquely situated to provide what boys need.”

Holzer, the Bismarck parent, said football has been a life-changing experience for her elder football-playing son, Demons sophomore tackle Conor Hedges, with the benefits showing up both socially and academically.

“After their season was over, the boys were in the weight room that Monday preparing for next season,” Holzer said. “Coach (Mark) Gibson is there and checks in with the players. He’s been a great mentor for the boys. And the boys want to play for him. I think that’s why Gibson has been so successful.”

Odermann emphasizes the importance of bonds forged on the football field, which is something he says kids can’t build when playing video games or other activities that might otherwise prevent their participation. Even today, he views his teammates from his high school and college playing days as brothers.

“When you’re building a genuine human connection, that’s the best mental health drug there is,” he said. “Football is uniquely poised to impact the highest number of people, because you need so many to be successful.”

Bismarck High School defensive back Lucas Miller runs down the line after his name is announced before a late-October game against Bismarck Century.

The Bismarck Century High School football team at the MDU Resources Community Bowl in October. Century plays West Fargo Sheyenne tonight for the AAA title at the Dakota Bowl at the Fargodome.