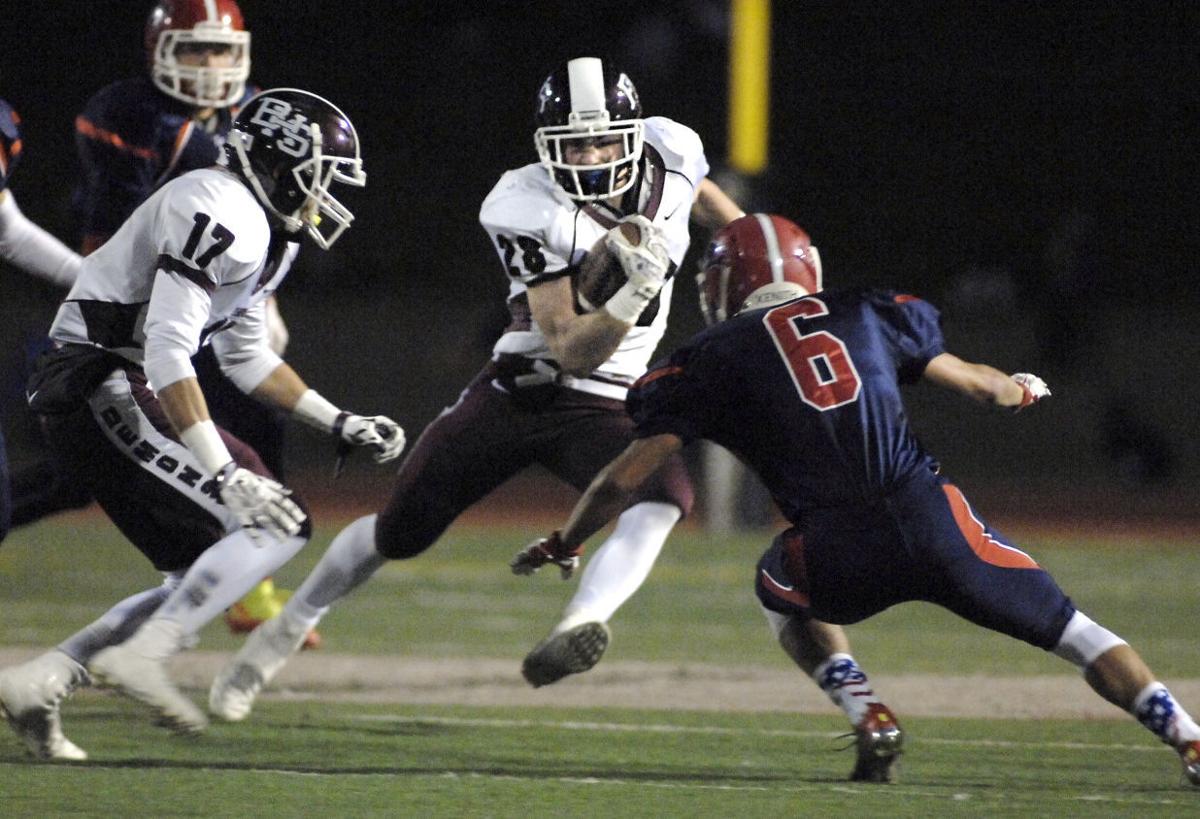 Bismarck running back Jaxon Ford, middle, uses the blocking of teammate Seth Siverson, left, to try to avoid the tackle attempt of Century's Drew Cady in the first half of Friday night's game at the Community Bowl. 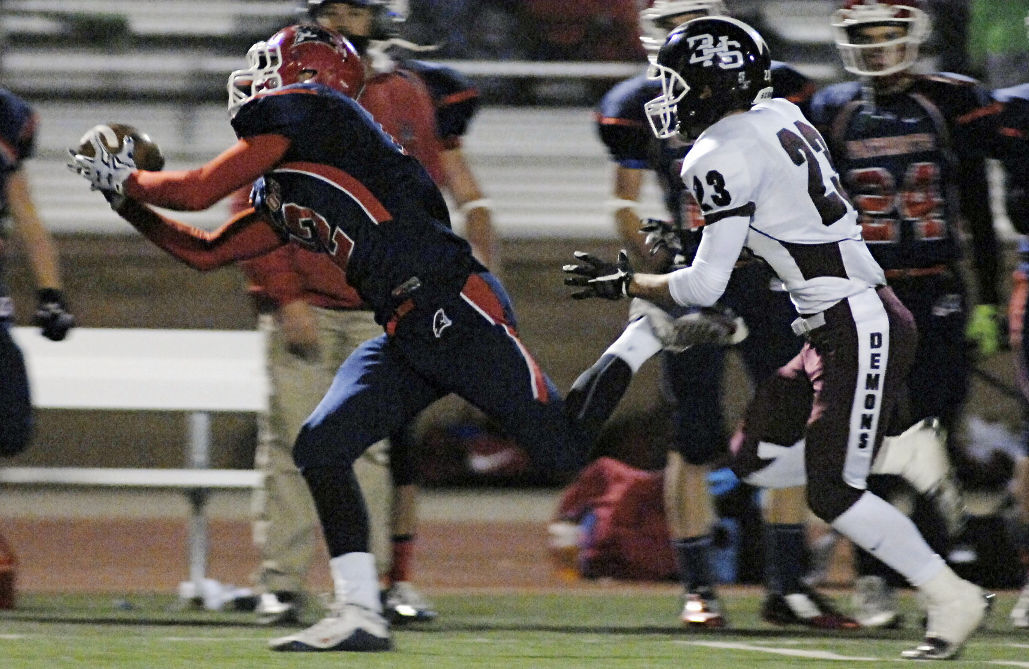 Century receiver Adam Gieger, left, hauls in a pass from quarterback Dalton Feeney after beating Bismarck cornerback Jalen Sprecher in the first half Friday night at the Community Bowl.

It would be hard to make the case that a one-dimensional offense is the ideal way to play football. However, Century showed it can get the job done in the short term.

Patriots quarterback Dalton Feeney went to the air for 387 yards and two touchdowns to lead Century to a 30-14 victory over Bismarck on Friday night at the Community Bowl. Feeney’s favorite target, 6-foot-3, 200-pound wideout Adam Geiger hauled in 10 passes for 219 yards and a score.

“In the playoffs that might not work,” Geiger said of Century’s pitch-and-catch approach. “But tonight we did a good job with it.”

Feeney, a 6-3, 210-pound senior, connected on just one of his first six throws, but after that he was nearly perfect, hitting on 22 of 29 attempts.

The quarterback said Century’s throw-first attack was based first and foremost on the Patriots’ confidence in their passing ability.

“We didn’t pass because we thought they were vulnerable. Their cornerbacks are good. We just thought our passing game could be better than their pass defense,” Feeney said.

Century ran 62 plays to 49 for Bismarck, normally a grind-it-out, ball-control team. Feeney was the player of record in 50 of those plays. He ran the ball 15 times for one yard and two touchdowns.

It was a must-win victory for Century, which averted elimination from the West Region playoff race by improving to 4-2. The Patriots close the regular season next week at Williston. Bismarck, also 4-2, visits Mandan next week in a contest with winner-takes-all playoff implications.

The Patriots broke the scoring ice early in the second quarter, Feeney barging into the end zone to cap a 14-play, 73-yard scoring drive. Zach Sweep’s conversion kick put Century in the lead to stay.

That’s the way it stayed until the third quarter when Century 42 yards to the BHS 23 in its first possession before stalling. Sweep came to the rescue with a 37-yard field goal and it was 10-0.

Bismarck responded with a 54-yard march to the Century 11 on its next possession. On fourth-and-six, the Demons called on kicker Hunter Johnson, who drilled a liner low left from 29 yards out.

Three plays later, Feeney went deep for Geiger, and overthrew slightly. The ball tipped off Geiger’s fingers and went straight to wide receiver Michael Olson, who was a couple of steps farther downfield. Olson dashed into the end zone for a 68-yard touchdown. Sweep followed with a kick and the Patriots were in charge 17-0 with 1:54 to play in the third period.

Bismarck appeared ready to make a game of it, going 78 yards in seven plays on its next series to cut the deficit to 17-7. Jordan Mann hit Ethan Hauff wth a 22-yard touchdown pass to get the Demons on the scoreboard and Johnson kicked the conversion with 11:31 left in the game.

Century didn’t miss a beat, though. Feeney closed an eight-play, 74-yard drive with a one-yard run on the Patriots’ next possession to make it 24-7 with 7:34 left to play.

The two teams exchanged touchdowns in the final six minutes.

Century scored on a 14-yard alley-oop, Feeney to Geiger, in which Geiger won a jump ball with defensive back Seth Siverson for possession.

Bismarck put the final points on the board with 1:44 to play, Jaxon Ford dashing in from seven yards out.

Century’s Jacob Rader, a 6-1, 175-pound senior linebacker, said the Patriots were determined to keep Bismarck from controlling the game with the run.

“We were going to come out and be physical right away and make them beat us with the pass,” Rader said. “We knew the task we had and were physical right from the beginning and got it done.”

Rader emphasized that the task was only half done.

“We’re pumped, but this means nothing if we go to Williston and lay an egg,” he emphasized.

Are the Green Bay Packers pretenders?

Century, Dickinson went down to the wire

A few eyebrows may have been raised Friday night when Century and Dickinson went down the wire.

Bismarck Century has taken its place among the elite high school football programs in North Dakota history and at times made it look easy. No …

After a couple of low-scoring games, the Shiloh Christian offense roared to life quickly on Friday night.

Marauders' Little has excelled on and off the field

Luke Little is one of the top D-II football players in the country, but it wasn’t always that way.

A winning streak will have to wait for the University of Mary.

Nailbiter goes to the Demons in 3-1 victory over Jamestown

Volleyballs had a tough time finding the floor on Tuesday when the Bismarck Demons took on the Jamestown Blue Jays. What else can you expect w…

Procedural penalties are the bane of any coach, and Legacy's Chris Clements saw his team commit seven of them in their 36-7 loss to West Fargo…

Mandan's last trip to the state tennis tournament was in 2013.

As his team was surrendering a seven-point run to Dakota College-Bottineau at the start of the fourth set on Thursday, Bismarck State College …

Bismarck running back Jaxon Ford, middle, uses the blocking of teammate Seth Siverson, left, to try to avoid the tackle attempt of Century's Drew Cady in the first half of Friday night's game at the Community Bowl.

Century receiver Adam Gieger, left, hauls in a pass from quarterback Dalton Feeney after beating Bismarck cornerback Jalen Sprecher in the first half Friday night at the Community Bowl.