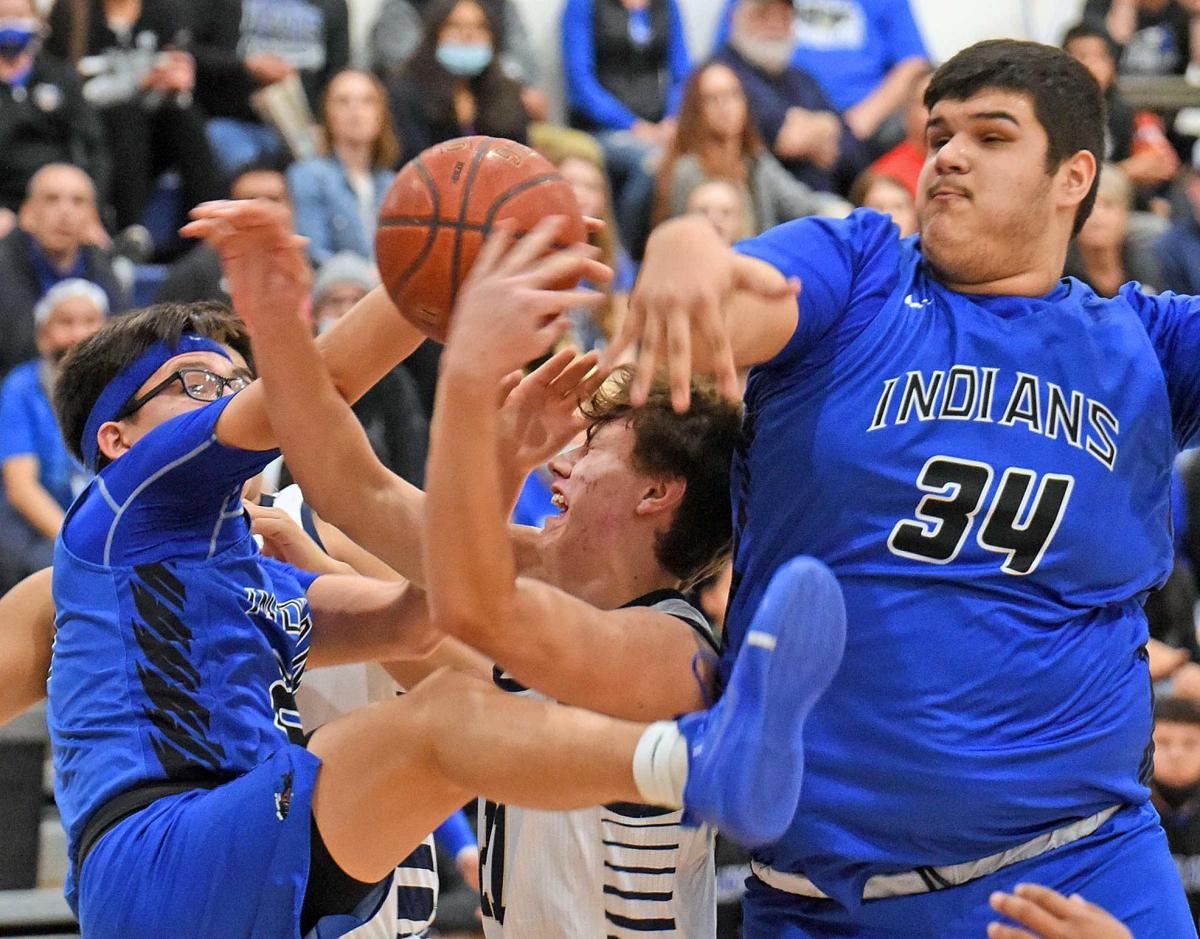 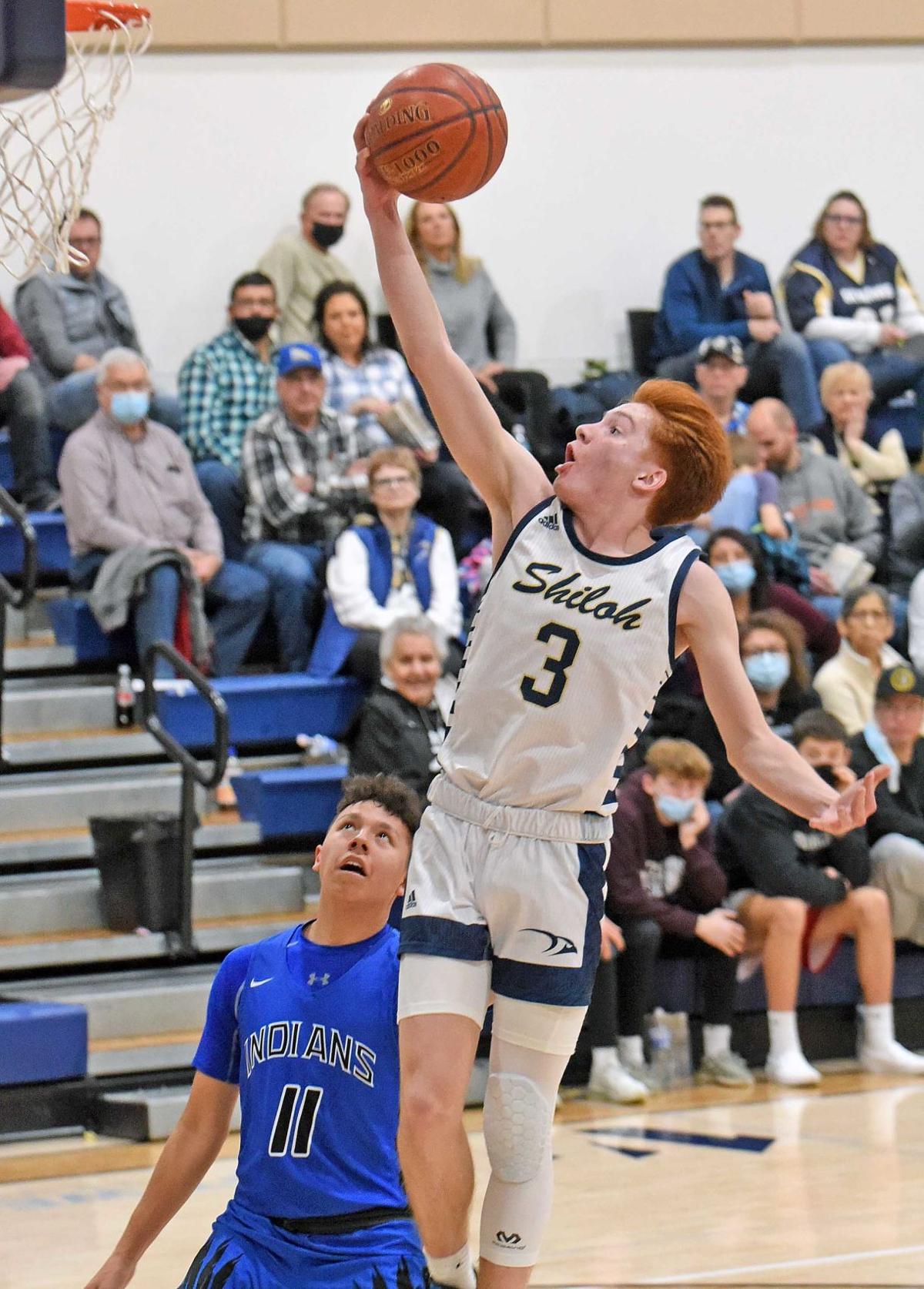 Shiloh Christian's MaBahi Baker (3) goes up for a layup in front of Four Winds-Minnewaukan's Jacob LaRock during Saturday's game in Bismarck.

Top-ranked Four Winds-Minnewaukan is known for its explosive, high-octane offense.

The Indians can play defense, too.

Four Winds-Minnewaukan closed out the regular season on Saturday with a 61-45 victory over Shiloh Christian, stretching the Indians’ winning streak to 16 games heading into the postseason.

It was the work on the defensive that was the key to the victory.

“Our defense came out strong and set the tempo right off the bat,” Indians coach Rick Smith said. “We thought maybe a bit too quick to pressure but our man to man stayed strong so we stuck with that.”

The Indians shut down the Skyhawks early on. Shiloh Christian managed just one field goal in each of the first two quarters – Khael Decoteau’s 3-pointer with 10 seconds left in the first quarter and MaBahi Baker’s 3-pointer four minutes in the second.

The Skyhawks had some open looks but just couldn’t get shots to fall.

“We just shot terrible the first half,” Shiloh coach Brad Miller said. “Some of them were rushed shots, some were not very good shot selection, some of them just didn’t go in. Sometimes that happens to you. You have to give Four Winds a lot of credit. They’re a very good defensive team, very athletic. They’ve got a big guy in the middle so they’re not giving you layups.”

“What they do is they keep the big guy in the middle so you can’t get anything inside and they run at you hard on the 3-point line so you’ve got to shoot jump shots,” Miller said. “Normally we shoot decent jump shots but tonight they just didn’t go in the first half.”

“I was really happy with the defensive effort today,” Smith said. “It’s a tough place to play, to come down and beat a team like Shiloh at their place, that’s not very easy. I’m happy with the win going into the postseason.”

Caelen Lohnes led three players in double figures with a game-high 17 for the Indians. Walter and Jonah Jackson finished with 10 points apiece and Jayden Yankton and JaeSahaun Shaw each finished with eight.

Four Winds-Minnewaukan came into the game averaging 76.4 points per game, but the Indians are comfortable playing at any pace.

“We want to go inside-out first with the big guy and when we’re controlling the rebounds on the defensive end, we want to get out and run,” Smith said. “We’ve got a big guy that can score, he draws the double team and sometimes a triple team, which leaves a lot of our guys open. We’ll do either, but we’ve got to be able to lock down defensively first.”

The Skyhawks found some rhythm offensively in the second half.

“Defensively I think we were there,” Miller said. “But our offense needs a little bit of improvement with our shot selection and we just need some of them to go in.”

The non-conference game was a good test for both teams as the postseason opens next week.

“I think we’ve had the hardest schedule of any Class B school in the state this year if you look at the games we’ve played, the teams we’ve played,” Miller said. “Hopefully it gets us ready for tournaments.”

The Indians are the top seed for the District 7 tournament, which opens on Friday in New Rockford. After an opening-round bye, they’ll face either Harvey-Wells County or Benson County in their postseason opener.

The Skyhawks are the No. 2 seed for the District 9 tournament, which begins on Friday at St. Mary’s. After an opening-round bye, Shiloh will take on Standing Rock or Solen on Saturday at 7:30 p.m.

Jesse White isn’t a household name on the North Dakota high school basketball stage, but he should be.

Mandan pulls stunner, knocks off Jamestown behind 21 points from Lowman

Jamestown has had Mandan's number in recent years.

After 177 points had been scored, it was a defensive stand for Minot which proved to be the difference Saturday night at the Bismarck Event Center.

Wilton-Wing held Kenmare to 15 first-half points en route to a 47-40 win at the state Class B tournament in Minot on Thursday.

Logan Nissley's sore shooting wrist will have to wait. There's work to be done.

Stingy defense key for Demons in win over Century

The postseason can be a completely different game than the regular season.

Century heads into next week's state Class A tournament on a serious roll.

Nick Kupfer and the Legacy Sabers are headed back to state.

Shiloh Christian's MaBahi Baker (3) goes up for a layup in front of Four Winds-Minnewaukan's Jacob LaRock during Saturday's game in Bismarck.