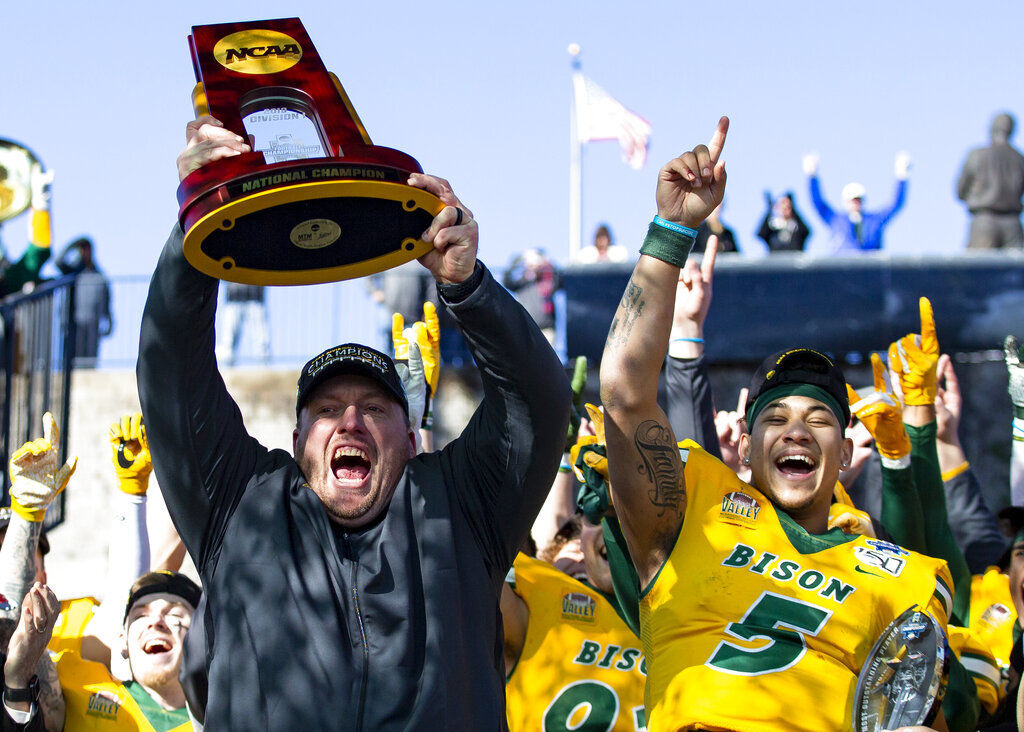 North Dakota State head coach Matt Entz raises the trophy alongside quarterback Trey Lance (5) after beating James Madison the FCS championship  game Jan. 11 in Frisco, Texas. The Bison will play one game this fall after all. NDSU will host Central Arkansas on Oct. 3 at 2:30 p.m. 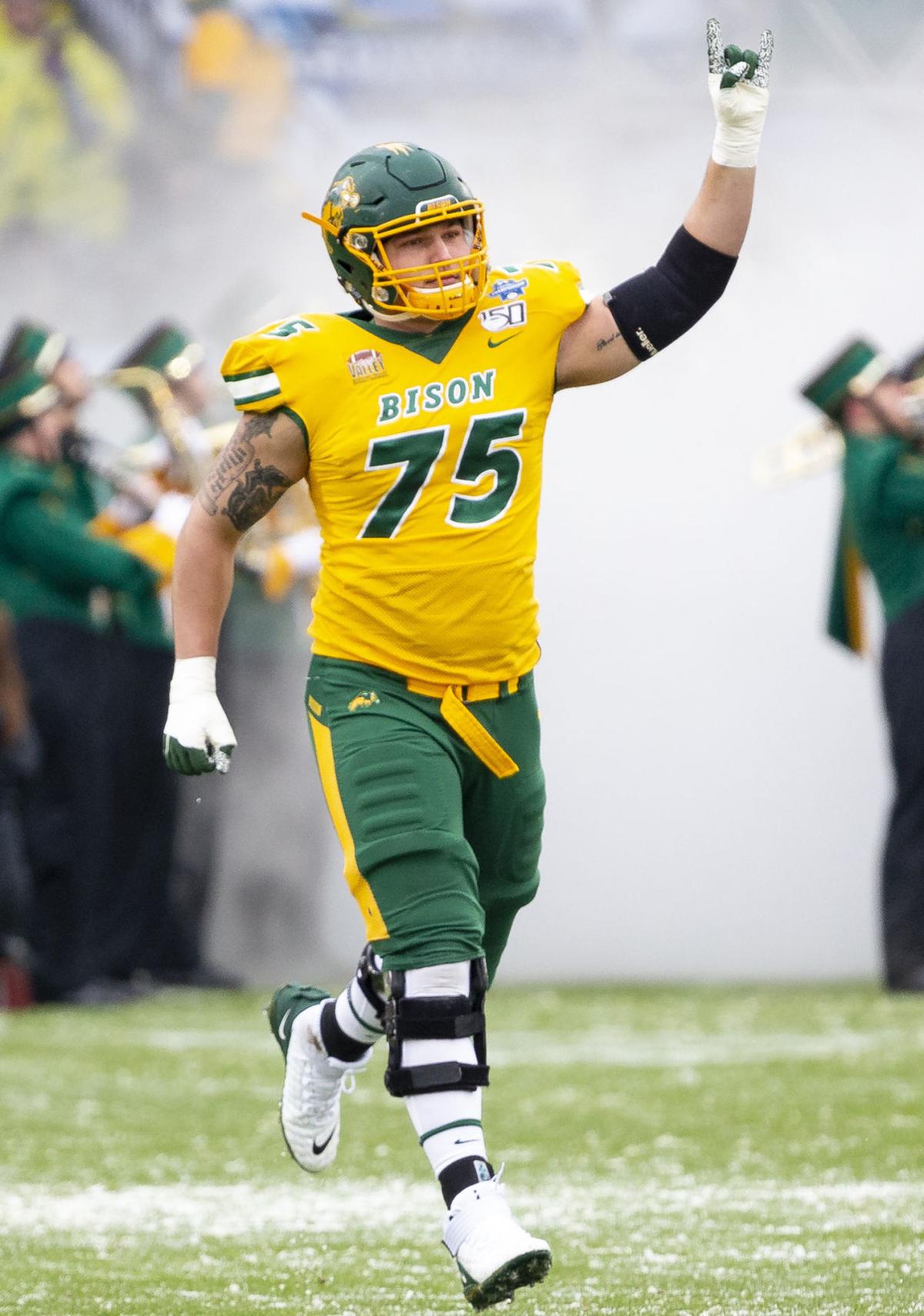 The Bison will play football after all this fall, albeit briefly.

After announcing last week it would not play in the fall of 2020, North Dakota State revealed on Monday it will host Central Arkansas at the Fargodome on Saturday, Oct. 3.

Despite the Missouri Valley Football Conference postponing its season to the spring, teams were allowed to play three nonconference games this fall at their own discretion. NDSU attempted to line up three opponents but did not find any takers.

One other development late last week played into NDSU's decision. The NCAA announced athletes would not be charged with a year of eligibility if they played in the fall or spring.

"That opened the doors for all of our players to participate," NDSU football coach Matt Entz said on Monday. "It was nice to make a decision for ourselves. Up this point a lot of the decisions have been handed down to us."

Entz said the Bison will return to practice next week.

"We're ecstatic it worked out. At NDSU we play football, that's what we do," Entz said. "It's going to feel like normal for the next six weeks."

Entz expects the majority of the original 2020 roster to be available for the game, including quarterback Trey Lance and offensive tackle Dillon Radunz. Both are considered top NFL draft prospects, particularly Lance, who many view as a first-round pick. There has been much speculation on whether either would play during a potential spring season and risk injury or opt out and prepare for the draft.

"They're on the roster (so) I anticipate they'll be ready to go," Entz said of Lance and Radunz.

NDSU athletic director Matt Larsen said the plan is to have fans at the game, although reduced capacity is expected. There will be no tailgating. Exact plans for ticketing are expected later this week or next week.

With uncertainty about what happens in 2021, Larsen said playing one game in the fall made sense.

"Nothing is guaranteed yet in the spring either," he said.

North Dakota State and Central Arkansas agreed to a three-game contract with the second game in 2023 and third in 2025. The first two will be played in Fargo.

NDSU and Central Arkansas have not played previously. Central Arkansas, a member of the Southland Conference, has won 35 games over the past four years, including three FCS playoff appearances. Central Arkansas is playing a full fall schedule. The game against the Bison will be its fifth of the 2020 season. The Bears went 9-4 and lost in the first round of the 2019 FCS playoffs.

In the Athlon Sports preseason FCS poll, Central Arkansas was ranked 11th. NDSU was ranked No. 1. The Bison are coming off a 16-0 season and third straight FCS national championship.

NDSU opened fall camp Aug. 7 and held five practices before shutting it down on Aug. 14. Entz said the Bison will treat the run up to the game like a traditional season opener.

"It's an exciting day today," the head coach said. "The team is excited to get back to work."

When the college hockey season starts, UND will be the clear-cut favorite.

The University of North Dakota hockey team will pick up where it left off.

Matt Calkins: Pac-12 doesn't deserve the benefit of the doubt when it comes to the College Football Playoff

Earlier in the month, Washington coach Jimmy Lake was asked about the prospect of getting into the College Football Playoff. Wisely, he refused the bait.

With no Pac-12 games airing late, college football fans are left in a dark place

For a month now, as college football has attempted to bring back some normal fall vibes in the middle of a seemingly never-ending pandemic, plenty has been missing from the experience.

Alabama coach Nick Saban tested positive for COVID-19 and likely will miss the Crimson Tide's game against Georgia this weekend. The Alabama athletic department confirmed the news in an email it sent throughout the SEC on Wednesday. Saban will be re-tested immediately to confirm the results. Otherwise, he'll continue to work from home, which he said he began doing Wednesday afternoon. SEC ...

The University of Mary hockey team finished off an unbeaten road trip with an 8-2 win over Waldorf on Sunday.

For Bison, beating COVID was job 1

North Dakota State head coach Matt Entz raises the trophy alongside quarterback Trey Lance (5) after beating James Madison the FCS championship  game Jan. 11 in Frisco, Texas. The Bison will play one game this fall after all. NDSU will host Central Arkansas on Oct. 3 at 2:30 p.m.