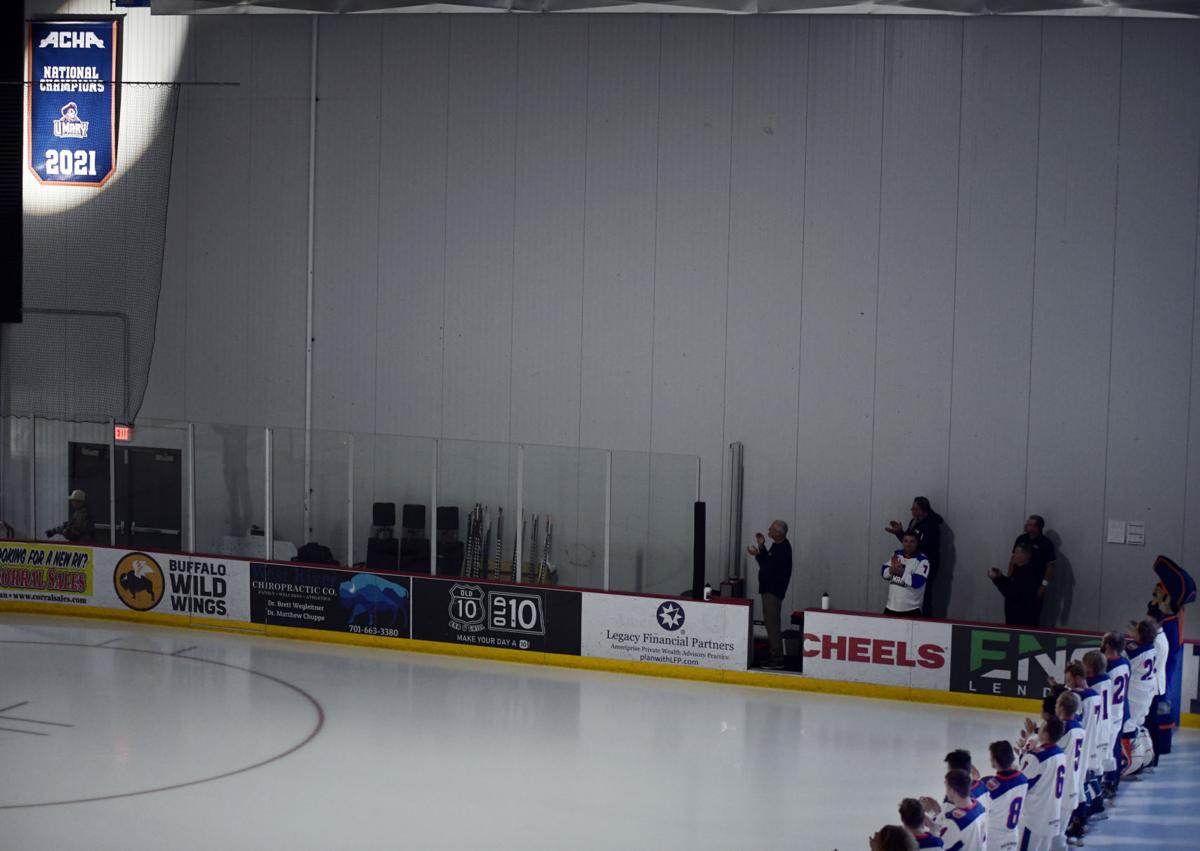 The University of Mary hockey team's 2021 ACHA Division II National Championship banner is unveiled Saturday night before the game against the University of Minnesota at Starion Sports Complex in Mandan. 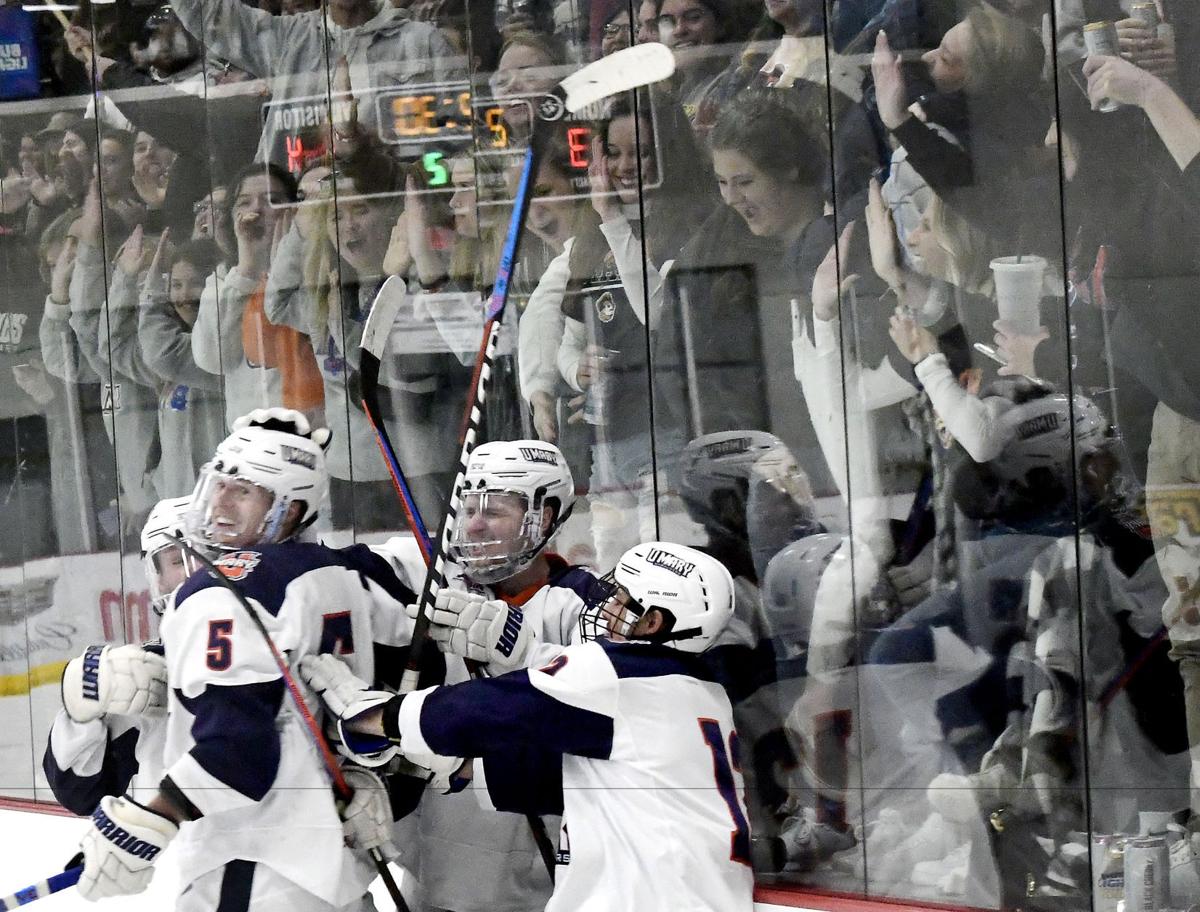 University of Mary forward Marcus Kopp (5) celebrates with his teammates after scoring a goal to tie the University of Minnesota 4-4 in the second period of Saturday night's game at the Starion Sports Complex in Mandan. 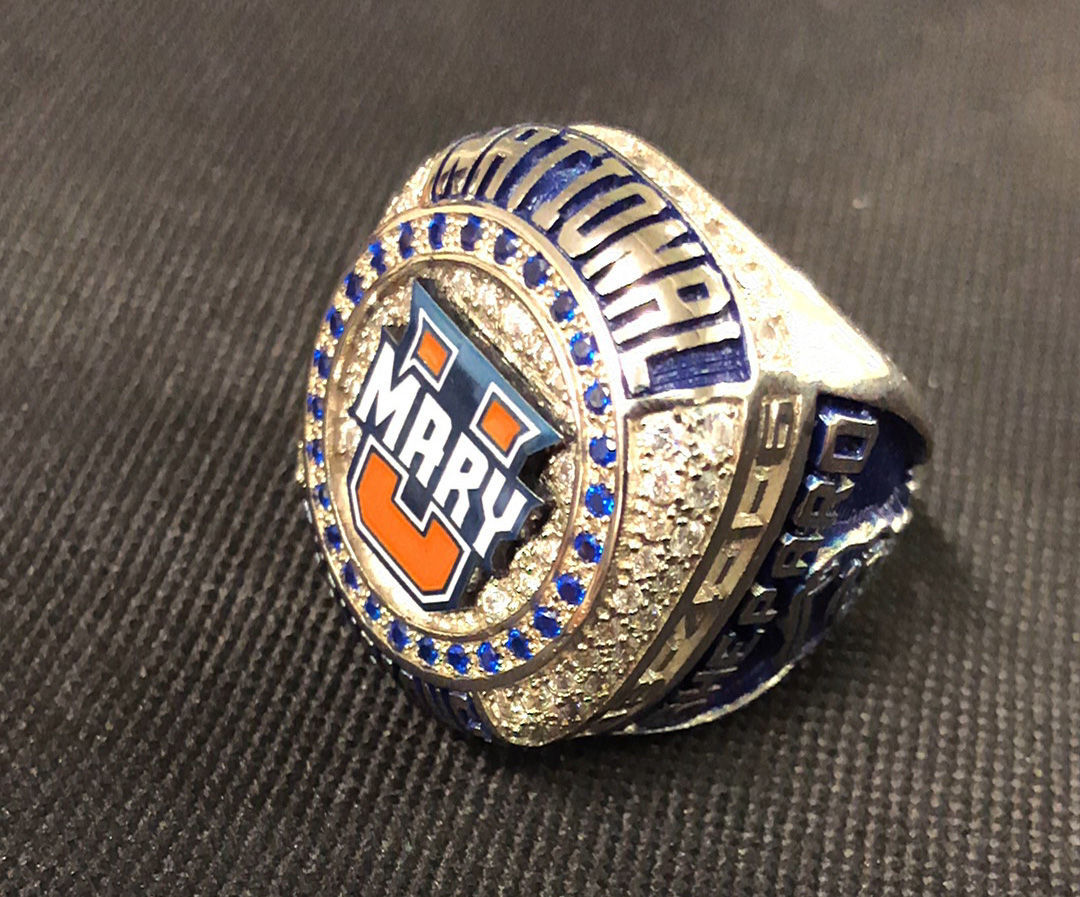 One of the championship rings for the University of Mary hockey team is shown. 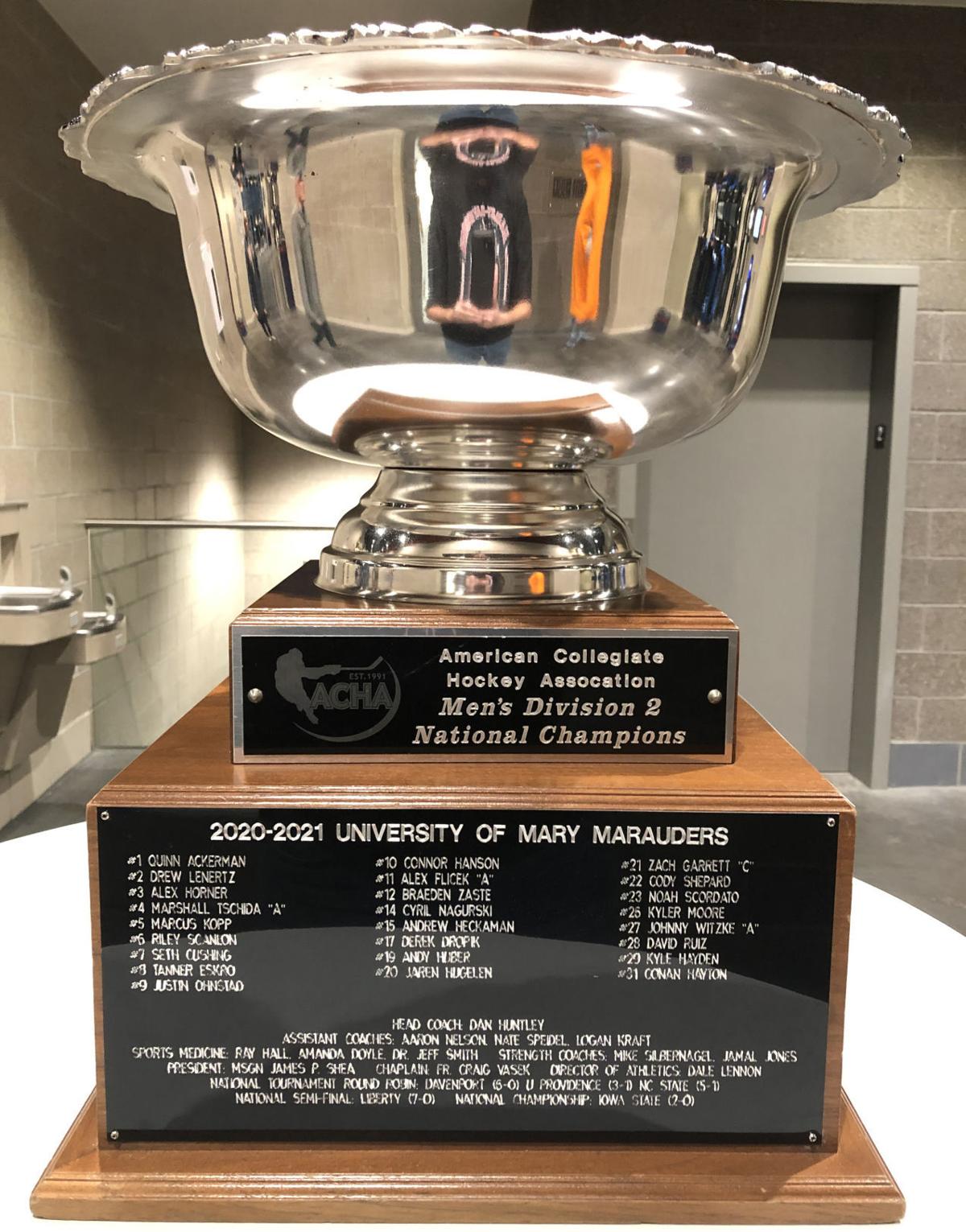 Saturday night was a banner night for the University of Mary, even before the puck dropped on its home opener at Schwan Cadillac Arena in Mandan.

Amid all the hoopla was a game against a team the Marauders had never met, a scare on home ice and eventually a hard-fought 6-4 win followed by a dominating 8-2 win on Sunday.

“Halfway through the second period last night we started simplifying things and getting back to the way we usually play,” said Zach Garrett, the reigning ACHA player of the year, who had three goals and an assist on the weekend. “The way we came back in last night’s game, we just took over from the start.”

Sunday was totally different than Saturday as the Marauders took a 3-1 lead. No ceremonies, no distractions, just hockey. Other than notching another win, the only milestone was Alex Flicek’s 100th goal, scored on the power play at 18:27 of the third period. Andrew Heckaman had a goal and three assists in the game.

For 10 minutes before the start of Saturday’s game, current and former players, a sell-out crowd of Marauder fans, parents and fellow students celebrated the unveiling of the 2020 national championship banner in a rather mundane but workmanlike way. The team lined up on the blue line like it was any other game and the banner was unveiled.

Former players Alex Horner, David Ruiz and Cody Shepard sported big national championship rings that current players had safely tucked away for the time being. Andy Huber, who wasn’t on hand as he is serving in the National Guard, will get his ring next week.

The ceremony was over in no time, and the Marauders and three of the four players whose careers ended last year in the 2-0 win over Iowa State in the title game left the ice briefly, and only the current team returned to take on the Gophers.

“It was a distraction from the get-go,” U-Mary coach Dan Huntley said. “You can do tons of things and it’s a special day. It means something to the guys who were here, no matter how long or short it is.”

In the locker room before the game, Huntley had implored the Marauders to take care of business early, and they tried, putting the first four shots on goal and outshooting Minnesota 20-5 in the period. But the Gophers made their shots count and goals by Kevin Kvaal, Jack Kimlinger and Max Boll staked the Gophers to a 3-1 lead. Johnny Witzke had scored a power-play goal for U-Mary to make it 3-1 and would assist on two other goals, including the game-winner in the third period.

But U-Mary had allowed more goals in one period than it had in its five-game run to the national title in the same building last April.

Another award presentation followed in the first intermission, as the North Dakota Associated Press Sportscasters and Sportswriters Association handed out its 2021 non-school team (U-Mary), coach (Huntley) and player (Garrett) awards to the Marauders.

Then it was back to hockey.

Garrett needed just 27 seconds of the second period to score another power-play goal, but Bryar Flanders made it a 4-2 game at 15:15 of the second.

Kyler Moore and Marcus Kopp then brought the sellout crowd to life with two goals in a span of 25 seconds. Kyler Moore scored first at 17:05, followed by Marcus Kopp to tie the game at 17:30.

“It took a while to get our feet under us, but once we got through it all we just went back to work,” Moore said. “We acknowledged it, then when they came out and put pressure on us, we just went to work.”

Moore netted the game-winner at 12:24 of the third period and Seth Cushing’s highlight reel goal provided the insurance the Marauders didn’t need. Cushing put the puck on his blade behind the net, came around and threw it into the goal on a power play at 14:23.

“It’s exciting to acknowledge what we did last year, but we have a new task at hand and that’s what we’re focused on now,” Moore said.

The University of Mary hockey team's 2021 ACHA Division II National Championship banner is unveiled Saturday night before the game against the University of Minnesota at Starion Sports Complex in Mandan.

University of Mary forward Marcus Kopp (5) celebrates with his teammates after scoring a goal to tie the University of Minnesota 4-4 in the second period of Saturday night's game at the Starion Sports Complex in Mandan.

One of the championship rings for the University of Mary hockey team is shown.